He has two degrees; was a slender 0.7 second away from a US Olympic pursuit place – but decided he needed two years away from cycling, ‘On the Road.’ We caught up with the Gin Optics rider Dan Harm on a humid night in Trinidad down at San Fernando’s Skinner Park velodrome.

PEZ: You had two years away from cycling, to ‘make music,’ Dan ?
Dan: I have a theory in life that you can only make the best decisions in life once you experience everything. The time away went well, I had a lot of fun. I studied philosophy and want fulfillment from life, not to be on a dead end street.

PEZ: Did you make any money out of music?
There’s less money in music that you can make in cycling. 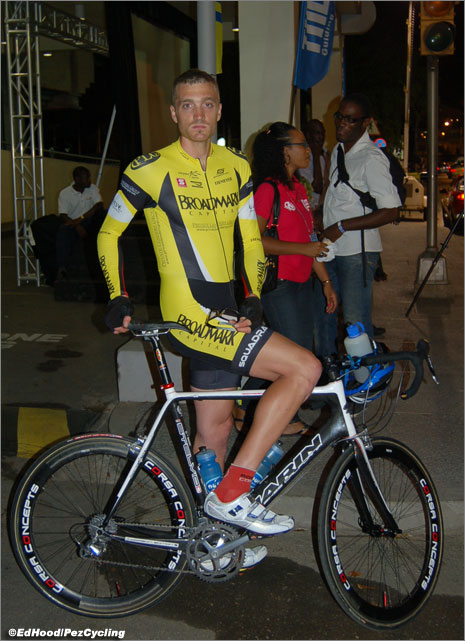 PEZ: You travelled a lot with you parents as a child, is that restlessness still within you?
Yeah, I picked up a bike at 20 and started to race, I loved it but had no idea what I was doing. I wasn’t in to football or basketball – I hate ball team sports. When I was 17 I did rowing for two years. At university I studied medicine but hated it, I rode the bike a lot because it helped me get rid of my anger and energy.

I raced for three years, but the last year my head wasn’t in it – I wanted to party and to make music, DJ – and that’s what I did. I’d travelled as a kid and was going stir crazy in Seattle. I made this plan to sell everything I own and live out of a pick up truck – a Jack Kerouac type of vagabond life. I’ve actually been writing about my travels, I have the first 250 pages drafted. I had to get out of Seattle, it was so insular – I’m glad I took the nomad route. But my best friend, Adrian Hegyvary (UnitedHealthcare), and I were at the same level as amateurs – over the last two years, whilst I’ve been travelling, he’s risen to the highest level of pro racing in the US and I think I’m capable of doing the same. 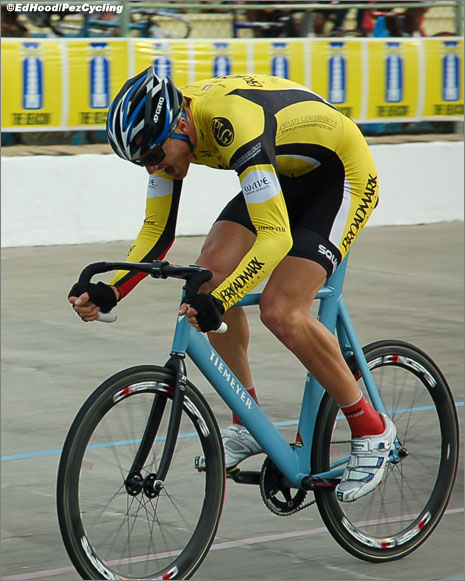 PEZ: You came very close to an Olympic pursuit qualifying time.
At the time yes, the qualifying standard has changed since but then I was 0.7 seconds away – that was 2007, my third year of racing.

PEZ: How about your road palmares?
I’ve ridden a couple of good TT’s in NRC events but that’s about it. 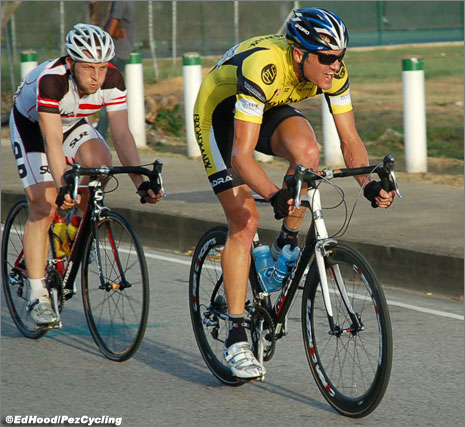 PEZ: What did you miss about racing?
I love being in shape, physically and mentally. I like training as much as I like racing – pursuit and time trial are suit me best. Maybe I’ve focused too much on them in the past but they’re what I’m good at. 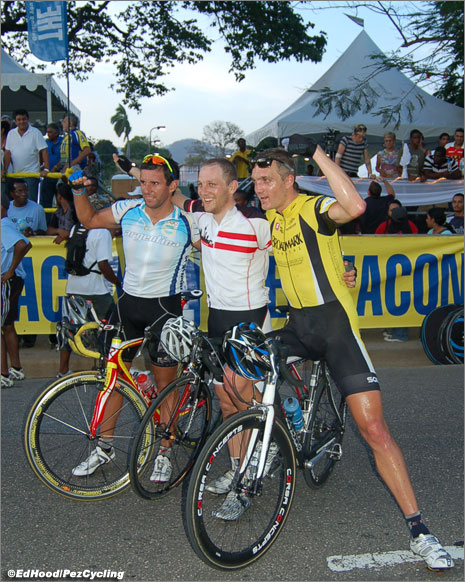 PEZ: And is the come back for real?
Oh yeah, it’s for real, I know myself pretty well and I’ve tried everything I wanted to – I know what my options are. I’ve peaked behind those closed doors.

PEZ: US racing is very criterium based.
Tom Zirbel couldn’t ride crits but made the top national rankings because of his ability to ride strong time trials in non mountainous stage races. That’s the direction I’d like to go in. 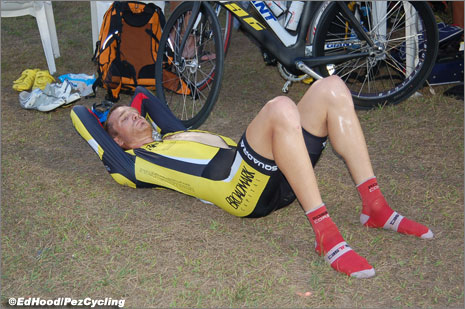 PEZ: You aim to focus on the US TT champs.
Yes, they’re at the end of June; I intend to start focusing on them after Speed Week – I intend to spend the entire month of May preparing for them.

PEZ: Europe?
I’d like to, but you need money to do that – sometimes you have to choose between eating and trick equipment; it’s like that with plane tickets, too. 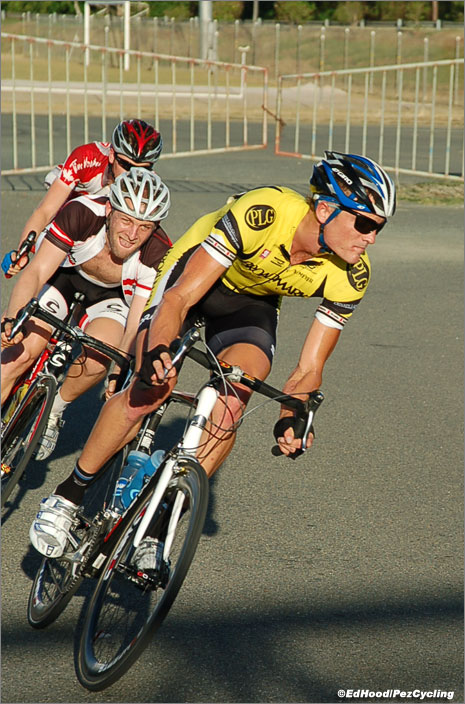 PEZ: How did you enjoy the criterium around the Savannah in Port of Spain.
I didn’t race smart but it was my first race in two years so I was just happy to be back racing. In general though, I need to ride more intelligently, analyse the opposition.

PEZ: Tell us about your plan to go to Nova Scotia.
I plan to drive up there in three weeks time and do my training for the TT up there. I’ll sleep in my pick up – I like that vagabond life, to be different. 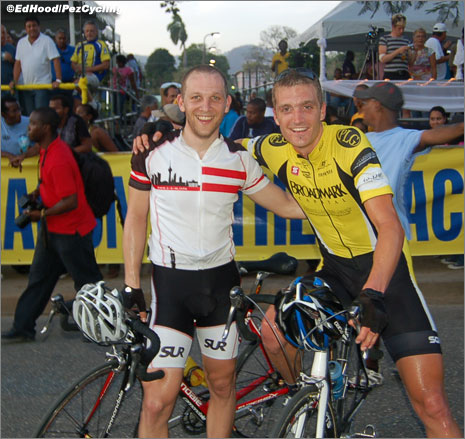 PEZ: And the Greek mythology mentioned on your FaceBook page?
I have a degree in philosophy and one in creative writing; when I was younger, I wanted to be an artist; but I have the rest of my life to get into art – I can only be a racer, now. 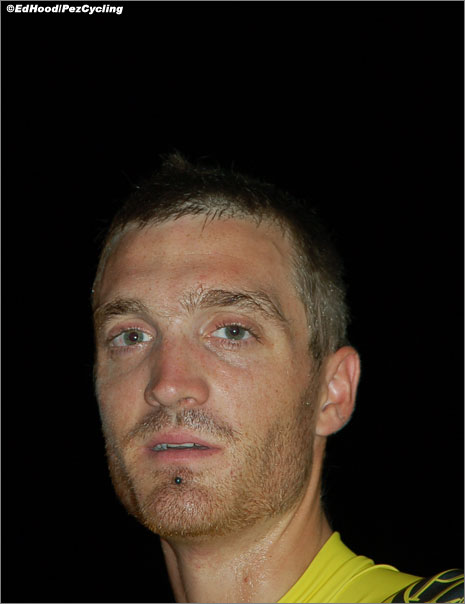 ***
In the last two races of his trip to Trinidad; Dan lapped the field in the Port of Spain criterium with German six day stalwart Andreas Muller. And was the only one who could live with a rampant Franco Marvulli in the blue riband 30 lap scratch on the big, rough Palo Seco velodrome – watch for him in the TT and pursuit nationals.