He’s been Trinidad & Tobago road race champion nine times and has been on the podium at the Tobago Classic (Tour of Tobago) so many times he’s lost count – he thinks it’s 15. But he’s not just an island boy; he’s raced and had success the entire length of the Americas – not to mention two years on the cobbles of Belgium. We caught up with Aerocat’s Emile Abraham on the catamaran ferry out of Port of Spain, Trinidad to Scarborough, Tobago – here’s what he had to say.

PEZ: Who were your inspirations as a young rider, Emile?
There wasn’t much TV and no cable, back them. European racing was something that you heard about but didn’t see much of – maybe a snippet of the Tour de France on the TV. But I was a big fan of Mario Cipollini – he inspired me.

PEZ: Trinidad has had some mean track riders, but you went to the road.
I started on the track but realised I had the talent and strength to be a road man. I wanted to change things – to be a rider from Trinidad known for his road results. 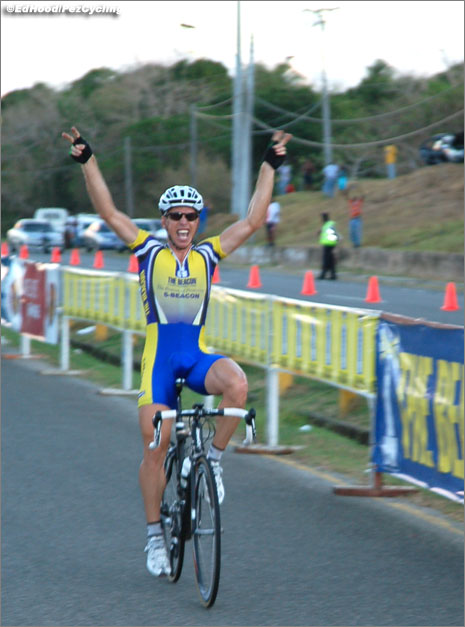 PEZ: How did you break out of Tobago?
Initially I raced on my home islands but then I began to travel in the Caribbean – Antigua, Martinique, Saint Vincent. In the mid 90’s cycling was very strong in the Caribbean – it’s dead now. They have the races in Curaзao at the end of the European season – I’ve ridden then twice but the scene is definitely not like it was. Then I began to race a little in the US, around Miami initially but then up into the North East, New York City, pursuing a road career but I rode track, too.

I rode for Christopher Fredericks’ team out of Florida and began to ride a lot of UCI races in South America – Brazil, Argentina, Chile.

I got my break at the 2000 Tour of Martinique – I was 2nd on GC, won the sprints jersey, was 3rd in the mountains jersey and won the combine jersey. I hooked up with the Belgian team – I said I wouldn’t ride against them for the GC if they did the same with me for the sprints.

They were impressed with me and invited me to Belgium for the 2001 season. I had seven wins that year, including stages in the Tours of Antwerp and Brabant. In 2002 I only had three wins, but nine seconds because they knew me by then and I came up against the combines, a lot.

I was 26 by then but it was great to get the opportunity. 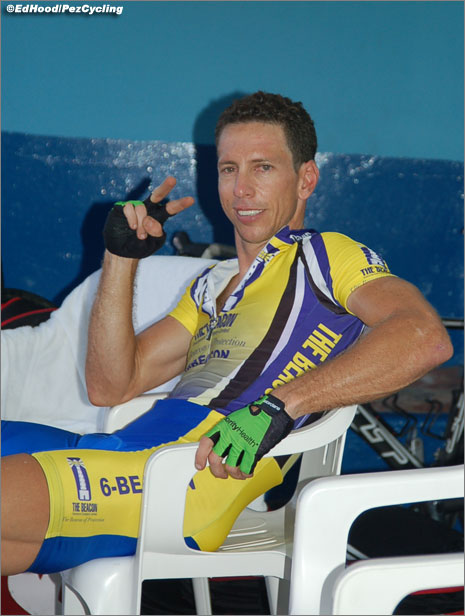 PEZ: Wasn’t the Belgian weather tough for you to get used to?
The weather took a lot out of me, initially – that and the pavй, but I got used to both, in fact it go so that I liked to race on the pavй and went well on it. The rain was tough, though; if you ride 50 races, it’ll be raining in 30 of them – but your body adapts, you get tougher.

PEZ: Why leave Europe – you were doing well?
In my third year I rode for Tim Harris’ Maestro-Nella team. We were based in Italy but didn’t actually race there, much. We had a good programme – Slovakia, Norway, Germany, Belgium, France. I was going OK but nothing spectacular – and then we had the Tour de Beauce, in Canada.

The sponsor actually rode for the team, Bruno Nella himself. He was Canadian and the Tour de Beauce was a very important race for him because it was a selection event for the Worlds, which were in Hamilton, Ontario that year (or reference site lists Hamilton as Nella’s place of birth) He did a really bad first stage and was so upset that he’d blown his selection chances for the Worlds that he decided to pull the team out of the race. 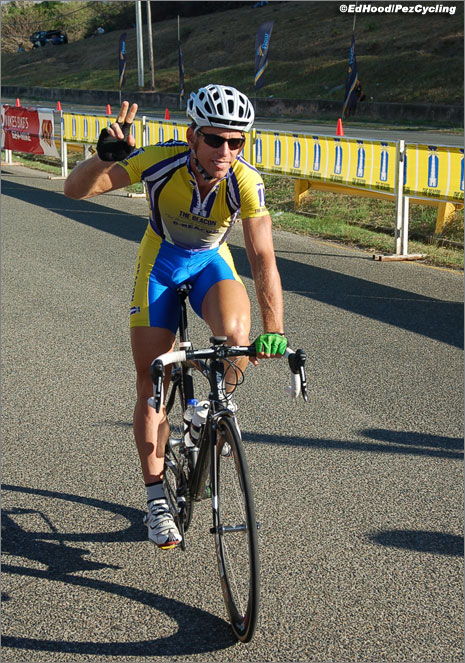 The remaining three of us wanted to keep going and approached the organiser. When Nella found out, he went crazy – he took all of our bikes and equipment away in the team van and left us stranded in Canada. It took me three days of begging and borrowing to get home to Atlanta via Montreal, Toronto and Buffalo.

I contacted Chris Frederick, he fixed me up with a bike, I raced for him and that was the end of my European adventure.

Being in Europe had been hard on my relationship with my wife, we dated since I was 19; being back in the US mended things between us, so I decided to stay. 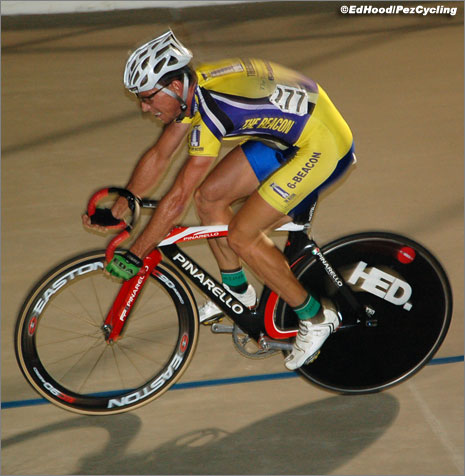 PEZ: Tell us about the 2007 Pan Am Games.
They were in Rio de Janeiro – that was my number one performance. I had no team, I was there on my own. The break was caught late in the race, there was a lull and the Dominican Republic rider, Wendy Cruz – it’s a girl’s name, but he’s a guy! – jumped, he took four seconds and just held on at the line. We came up to him and passed him so fast that as he stuck his arms out he nearly slapped me in the face! I beat Luca Pagliarini (Brazil) the Saunier Duval pro into bronze in the sprint and took the silver. It was the best performance by a Trinidadian athlete in the whole Games, we won three bronzes but that was the only silver. What was disappointing was that I went straight back to my US domestic programme after it – I didn’t get the chance to enjoy it with the folks back home. But what was cool was that the Trindad Olympic Committee voted me athlete of the year for 2007. 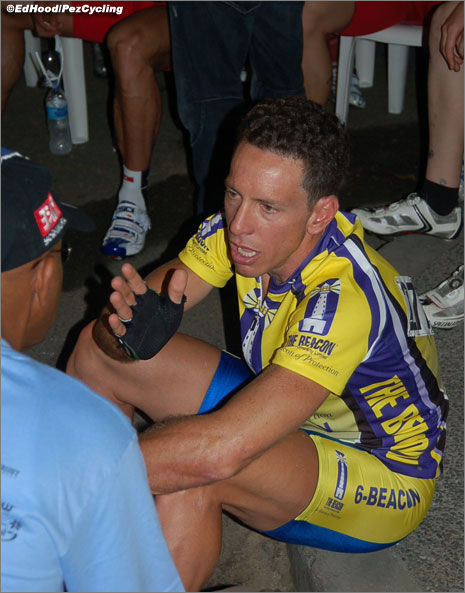 PEZ: How many Trinidad titles have you won?
I’ve won 24 at various levels and disciplines – junior, track, road, but I’ve won the road title nine times. It’s good to ride in the national champions jersey, it creates a lot of interest.

PEZ: The Tobago Classic (Tour of Tobago) must be a big deal for you?
I’ve won it seven times, the first time when I was 18; even if I don’t win I’m usually on the podium – second or third. I organise a team for the race and for the last six years straight, we’ve won with guys like Heath Blackgrove and Ivan Dominguez. 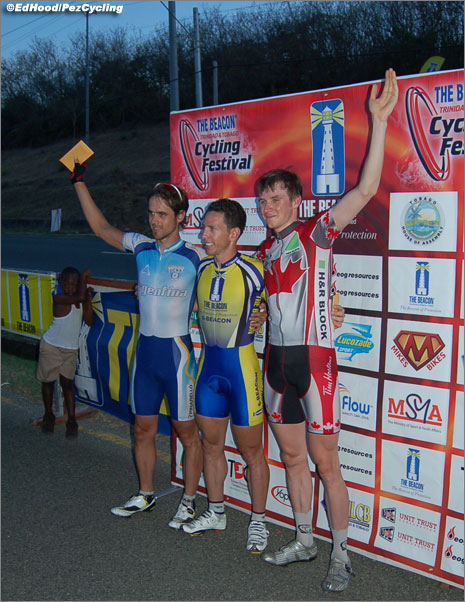 PEZ: The Caribbean-Europe-The States, how do they all compare?
The Beacon Cycling festival has done a good job of bringing the stars to the Caribbean and so has the Tobago Classic – riders from Germany, Austria, UK, Canada, Belgium, Holland but apart from that, the road scene in the Caribbean is dead.

The European scene is faster but the US racing suits me better – lots of criteriums and primes.
Philly is a great race, the noise on the Manayuk wall is something else – but I have to tell you, I miss the European cycling and everything that goes with, the folks there love it so much.

PEZ: Aerocat?
The team was already in existence before I came on board; I liked the guys, there’s not too much pressure and I’ve become good friends with the owner – in fact, I’m now a partner in the team.

PEZ: When I was checking you out, I saw one website reference to the fact you could ‘out dance anyone!’
I have tamed a bit, but I can still limbo – I reckon I still have it in me! 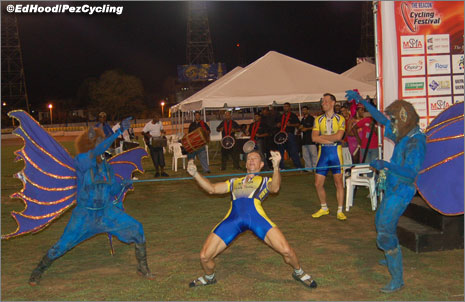 PEZ: Will you return to Tobago when you retire?
I’m happy doing what I am, we hope to take the team bigger for 2011 and go full pro – that’s our goal. I also have my coaching – those are my two main things for the immediate future. 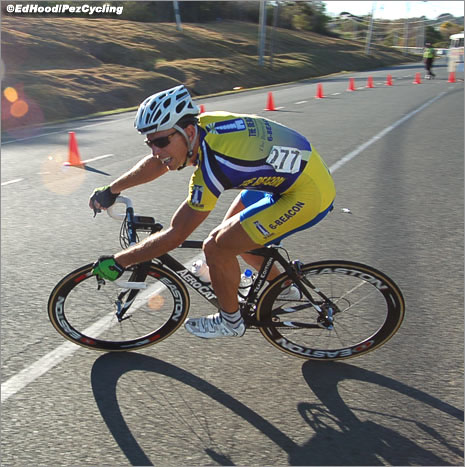 PEZ: You were team mates with Hamish Haynes, in Belgium?
Yeah, I never forgot Hamish; he was a vegan and I’m a big meat eater, we never saw eye to eye on the food situation but we respected each other’s views. It was cool when he won the British title and I’d won the T & T one – we’d both come a long way. 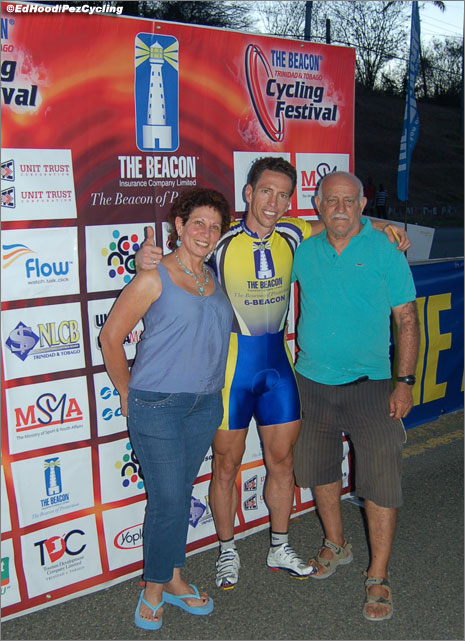 Emile with his parents at home in Trinidad!

PEZ: Tobago – a party place; can partyin’ and cyclin’ co-exist?
If you go out late to a club, it’s OK to have one or two beers, but that’s all, the rest should be soft drinks. And you should try to sit down as much as possible. When you get home, you should give yourself a massage and drink plenty of water before you go to bed – if you do all of that, you’ll feel fine!

***
And that’s from a man who knows; with thanks to Emile for devoting a whole ferry trip to Pez and wishing him all the best for the Tobago Classic in September.