Catching Up with Canada and Astana’s Hugo Houle

Rider Interview: The Astana team presented their 2020 riders and staff in Calpe, Spain at the end of December. Our man in Spain, Alastair Hamilton, was there for the bright lights and to catch up with Canada’s Hugo Houle. It’s been another good year for the man from Sainte-Perpétue in Québec, here is how he saw it. 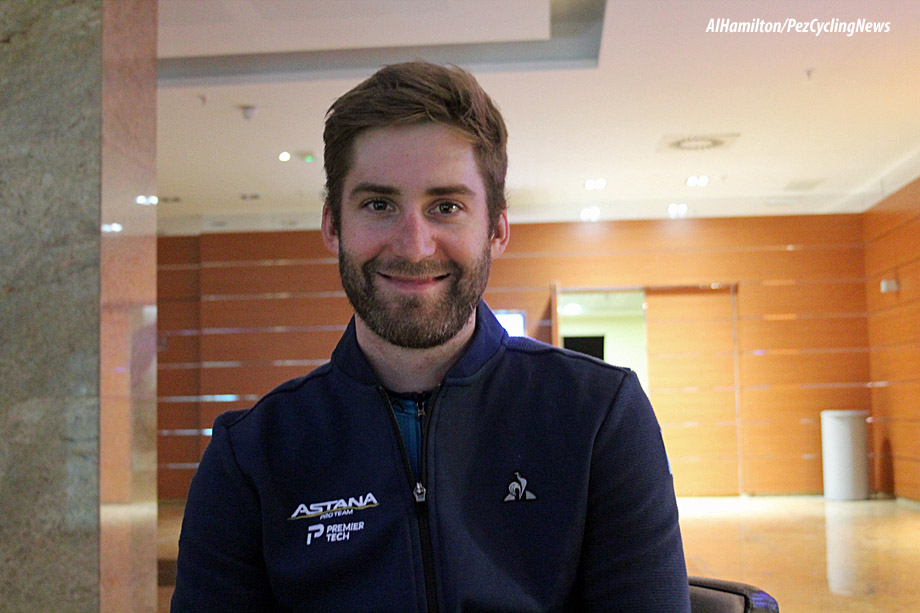 Always good to catch up with Hugo

PEZ: It was quite good season for you?
Hugo Houle: Yeah, I’m really happy with my season, I think. I also had a good progression again, as a teammate I was able to do the best races. It was a big goal to do the Tour de France and to achieve that was already a big step forward for me this year.

PEZ: Was that the high point of the year?
Yeah, for sure. It was one of the good points of the year. I think we had a really strong Dauphiné, but we struggled a bit in the Tour with the crash of Jakob Fuglsang. We came with high expectations and I think we left a bit disappointed, but yeah, that’s racing. We had a lot of success this year, but again we missed out on the Tour de France. After this it was a really good season, I was pretty good in the Tour of Norway with Alexey Lutsenko, who won the race and I was fifth and I showed my progression. Yes, it was a good year. 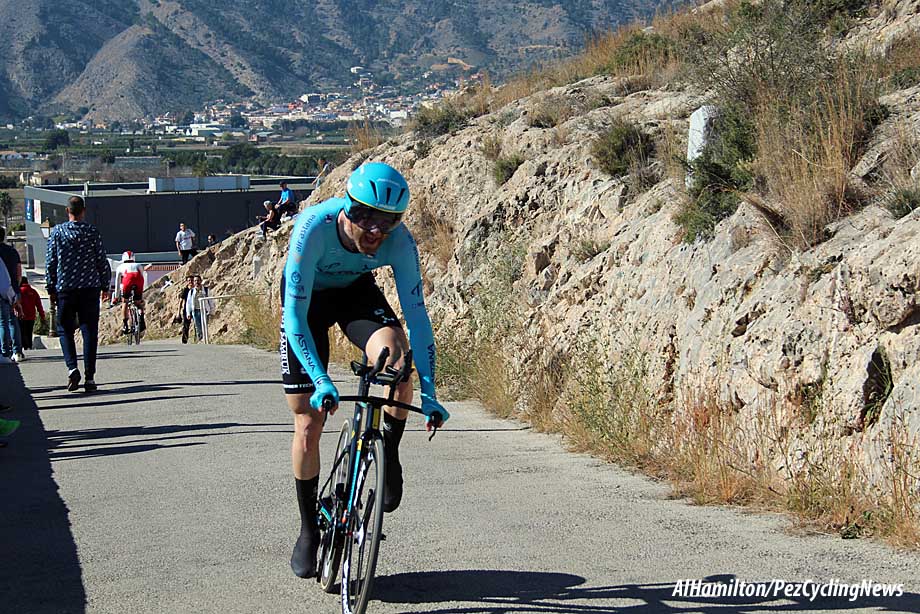 PEZ: Was the low point the crash of Fuglsang in the Tour?
Of course at the Tour that was a big disappointment. 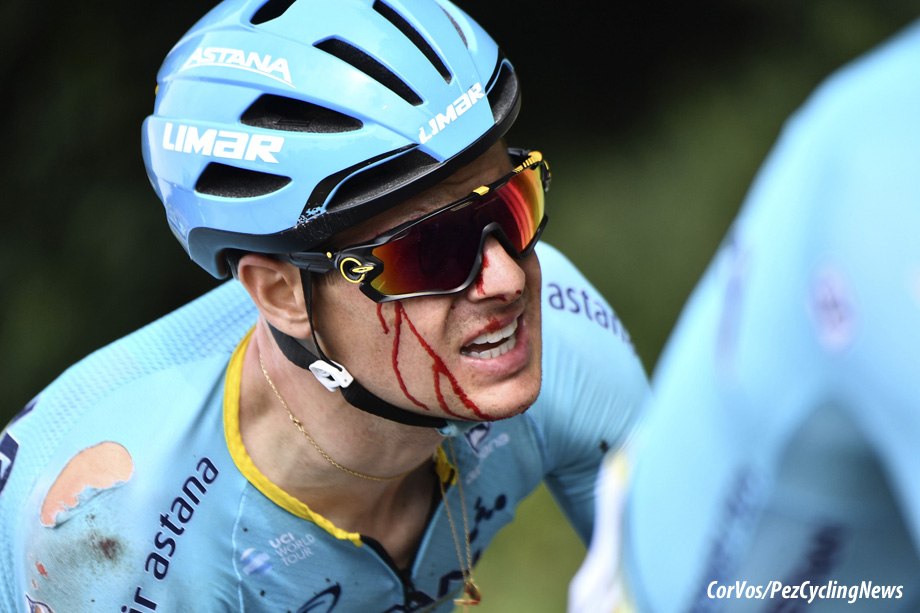 Fuglsang out of the Tour

PEZ: For you, personally, what was the low point of the Year, or wasn’t there one?
Really I was quite consistent, there was no point where I was really, really bad. A good season.

PEZ: You finished all the Classics except Gent-Wevelgem.
That was because of a puncture, but I was at top of my form there. I had some bad luck in the Classics, I would say for the form I had I could have done better, I had a few mechanical things, but that’s the Classics. I will try to be better this year in that part of the year. 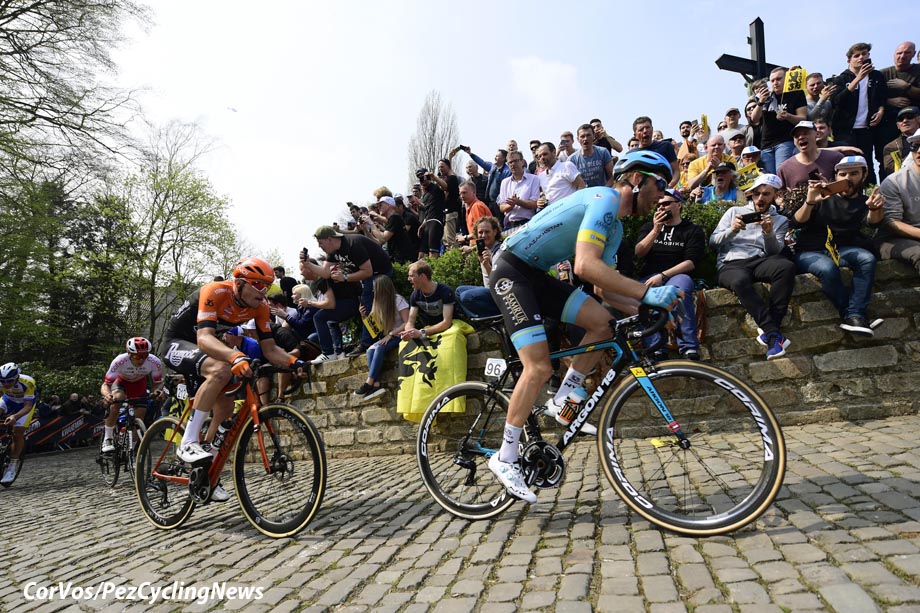 In the Flanders’19 break

PEZ: What about the change of bike? You won’t be riding the Canadian Argon 18 bikes in 2020?
Yeah, that’s sad. We have a new bike now and we have had the chance to try it. Willier is a good company and they are already involved with the team. I think we will have a good bike again this year. 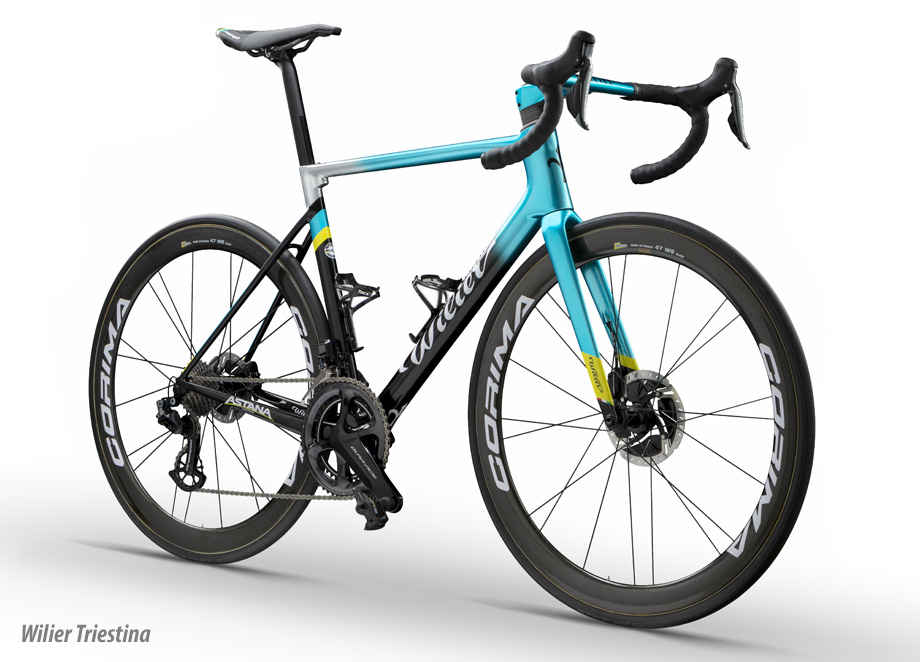 PEZ: Have you used to time trial bike yet?
Yeah, a little bit, not a lot, but it’s a pretty good bike. It’s fast and the numbers are good. We will see what we can do in the races, but the bike is good.

PEZ: The bar and stem looks really nice.
Yeah, we got some special stuff and they have already worked a lot on it. 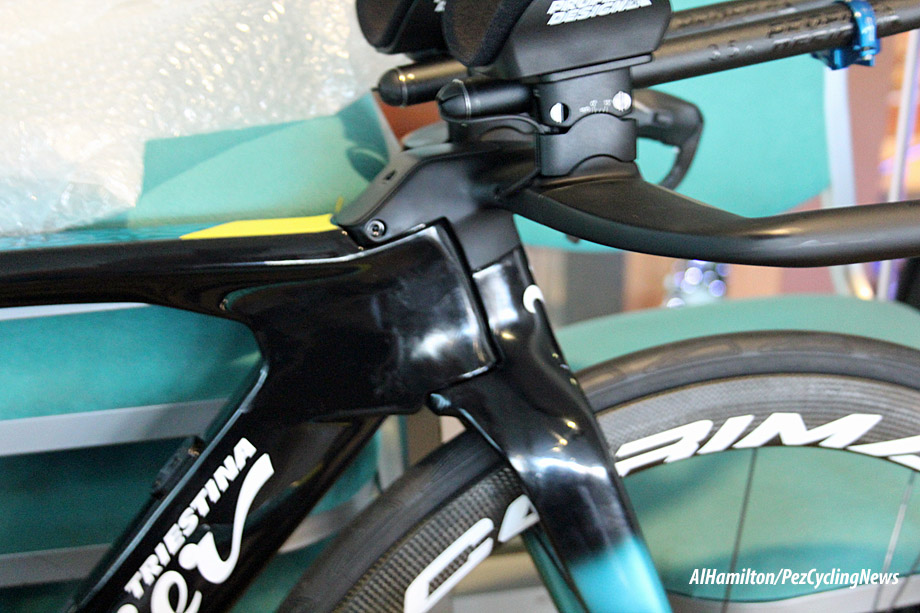 PEZ: The Arctic race was probably your best result?
Yeah, it was the best result for me. But again I was playing my role as a strong rider for Lutsenko, who won the race. It was really good fun to play for the win. We put the pressure on the other teams, especially on the last stage, having me up the road with Van der Poel, so we put the pressure on. It took a few teams to bring us back and in the end we were able to win the race.

PEZ: Fifth overall was pretty good as well.
It’s really good for me. I showed I progressed this year, so that might be more important for me in the future. But of course it’s hard when I race only the WorldTour races mainly around Jakob (Fuglsang) and he’s always stronger than me, but that’s okay. The team appreciate my work and that gives me confidence. 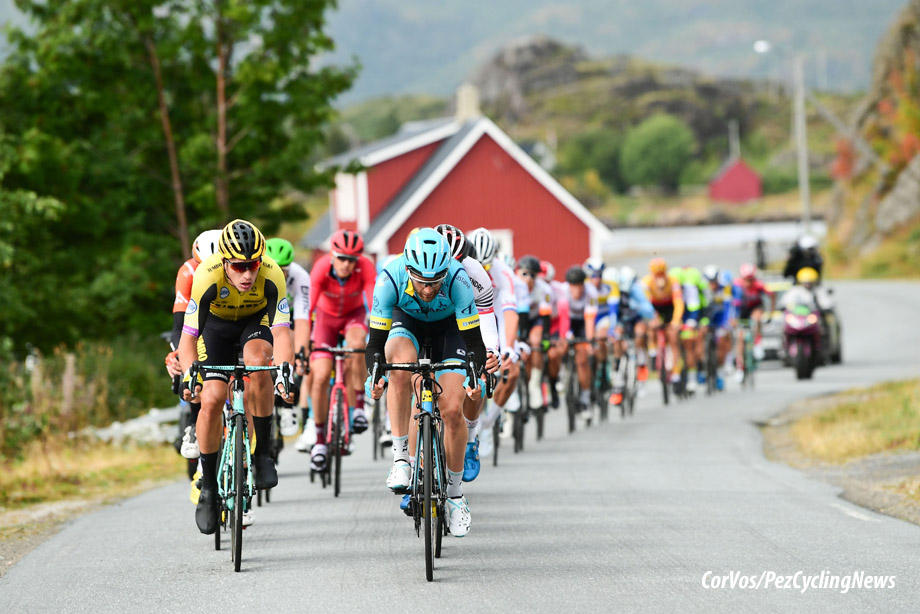 PEZ: That’s my next question. You’ve got a contract for the next three years, so the team must be pretty pleased with you.
Yeah, they’re really happy with the work I do. I’m a team player, and, in the end it’s nice to see that they recognise what I do for the team. It’s exciting for me to stay in Astana, I feel at home here and everyone is really friendly. As you know we have a new sponsor from Quebec for the next three years, so we want to have more success.

PEZ: Having that contract for three years ahead, does that make you more comfortable? Three years that you know you’ve got a team, you’ve got a job.
Yes, of course. It’s nice to have this security, but in my mind it doesn’t change anything. At the end of the day, I need to give the best every day to keep my spot because three years is long, but it doesn’t change anything as there is still pressure on. You know you have a job and I think it will help me to be more relaxed and just focus on what I need to do and everything that goes with it. 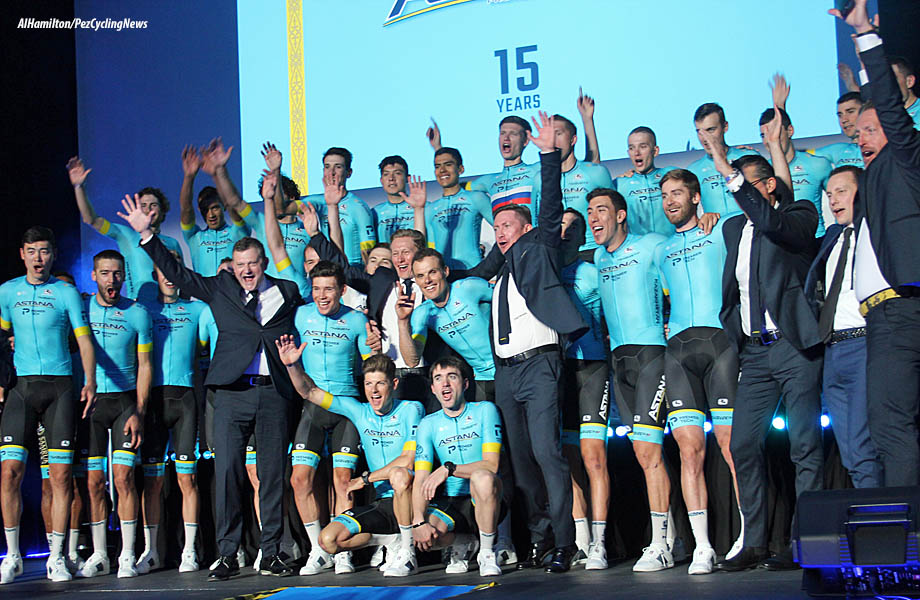 PEZ: What was your impressions of the World road race in Yorkshire?
It was pretty intense with the weather. That was why I decided to go on the attack so I wouldn’t get cold, and you never know what can happen. I was really, really cold and it was hard, a lot of suffering for the guys to finished the race.

PEZ: It was maybe a day for a Northern European… or a Canadian?
I was not so bold with the guys in the breakaway, but the field was too strong and I did not expect the peloton to catch us so soon, but on the circuit they were flying and that was it. 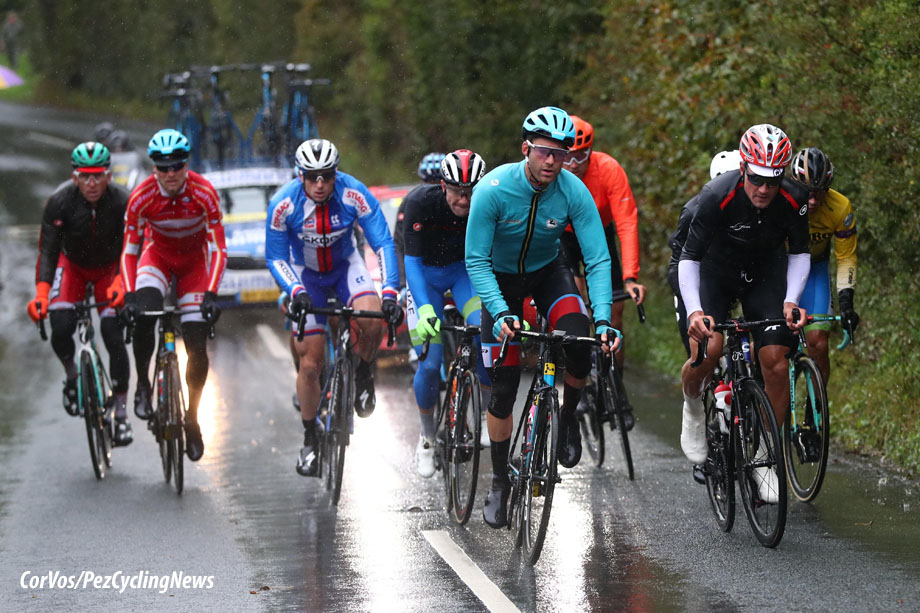 A cold day in Yorkshire

PEZ: And Van der Poel, what do you think of him?
He is a champion, a big talent for sure. When you see what he did in the Classic in his first time, he is just having fun. The next Peter Sagan for the next few years. At the Worlds he was really strong, but made a mistake with the nutrition, it happens, it’s not about power when that happens – When you are empty, you’re empty. You need to eat more with the cold and everything. We can expect him to be a big star and an Olympic champion, we will see how he will manage all that pressure.

PEZ: Cyclocross, mountain bike, road…. Maybe too much?
Everything he wants to do he can, he’s good.

PEZ: You will probably ride the Olympics?
That’s the plan, but there is no official selection yet. Michael Woods will be the leader and I should be there and there’s also a third place. I would hope to ride the time trial, but the focus will be around Michael, making sure he can do a good ride and have a chance of winning a medal. I will give him my support, I will focus to have good form after the Tour and help Mike. 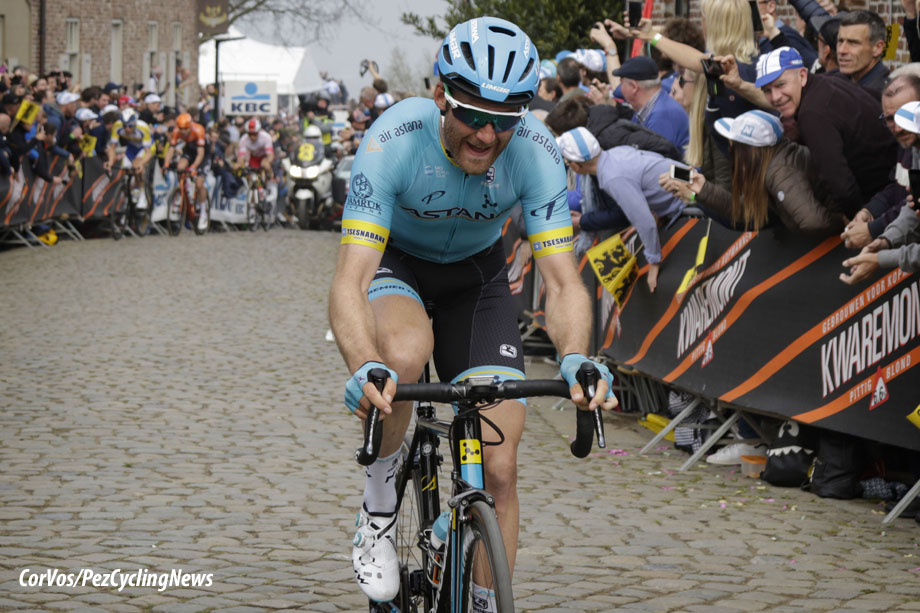 PEZ: Have you looked at the circuit?
Yeah, It looks hard, a lot of hills. I hope to be able to stay with Mike to the last climb to make a difference, to have Someone around will be important.

PEZ: It could be hot and humid as well.
Yeah, for sure. Interesting

PEZ: Next year, what other points are you looking at, apart from the Olympics? The Classics again, obviously.
The first one will be the Classics and of course a Grand Tour, to try to win a stage, we will see if there’s any opportunity. The goal is to win the race, that will be my challenge for the next three years, to keep working hard for the guy and see what comes out of that. 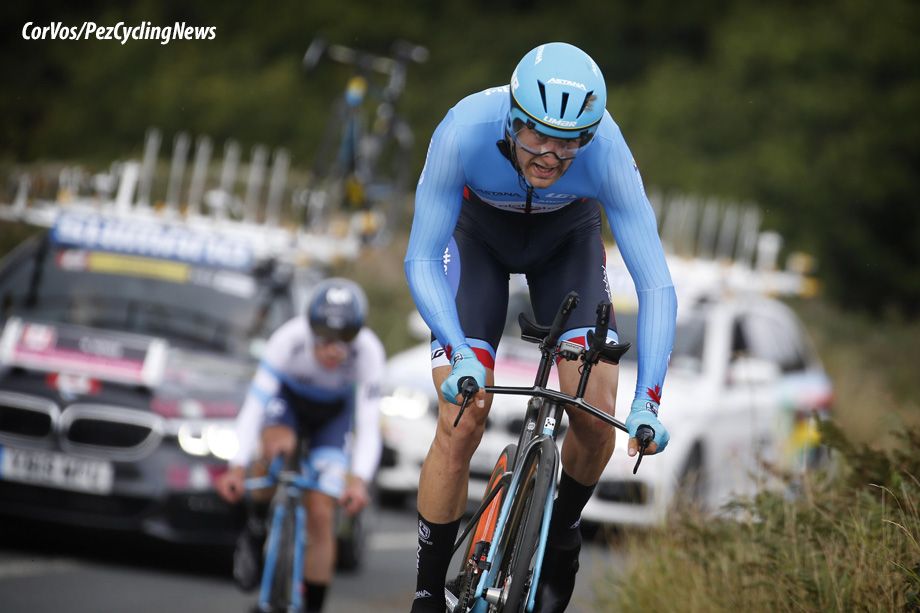 PEZ: You will ride the Tour?
Normally yes. I know some plan, but there is still some discussion about it. You know Jakob goes to the Giro and maybe me. The plan is for me to go to the Tour de France, but we’ll see.

PEZ: So it depends a lot on Jakob?
It’s a complex situation; it’s hard to be at top level at the Giro if you have just come through all the cobbles stones and the Ardennes races, it’s a big block, but we will find out in a meeting in the next few days.

PEZ: Do you know when you will start the 2020 season?
Valencia, Ruta del Sol, then Belgium and the Classics, Paris-Nice and more Belgium. 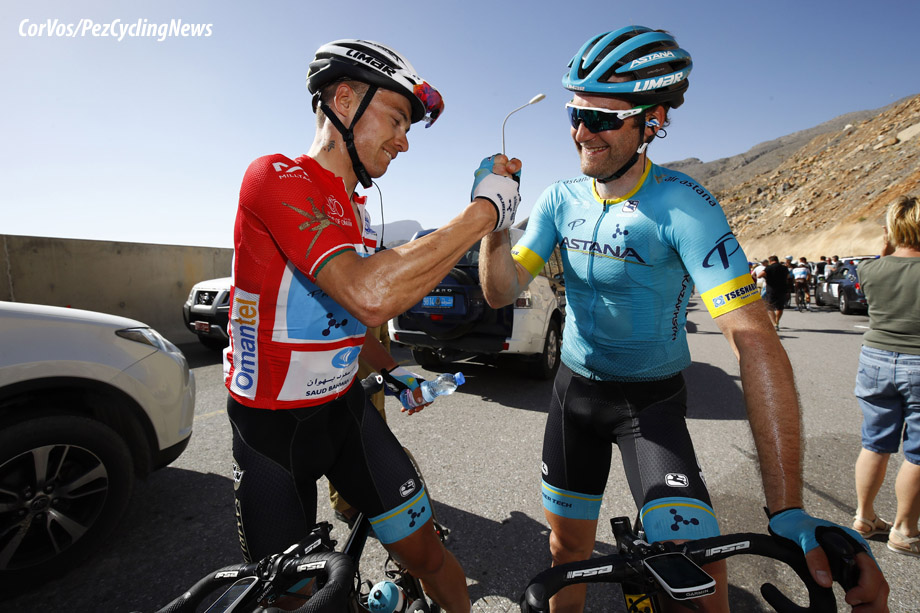 Alexey Lutsenko and Hugo Houle at the Tour of Oman

PEZ: You are obviously happy with Astana.
We have quite a lot of changes here. New riders, some younger guys have come. It’s like a big family, the staff are really professional, everyone takes care of me and I’m happy here and I have everything I need.

PEZ: Have you been home to Canada much?
In October and in November and Christmas this year after four years.

PEZ: A Canadian Christmas will be different from a French Christmas?
Yeah, not to be alone, that’s different.

PEZ: Stuff like the presentations and the media time, is that a pain in the arse, or do you like it?
No, it’s part of the Job and it’s nice to see the sponsors and partners and enjoy a day with the press and everything. 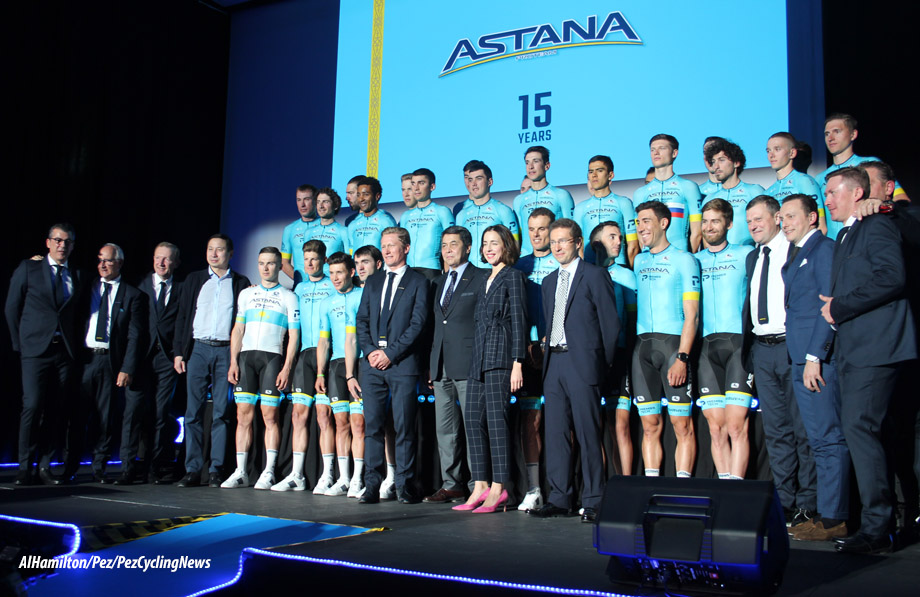 PEZ: How important is the early training camp in December?
It’s Important. This is were we build the base and to do some good training here. There is no stress, but those kilometres are very important for the season and it has shown how successful the team has been early in the season, so that’s one reason why we spend a good twenty days here.

PEZ: And you are back in January?
Yes, I don’t know if we are in this hotel or in the Suiteopia, be we will be back.

# Good luck to Hugo and thanks to Vitalii Abramov for setting up the interview. # 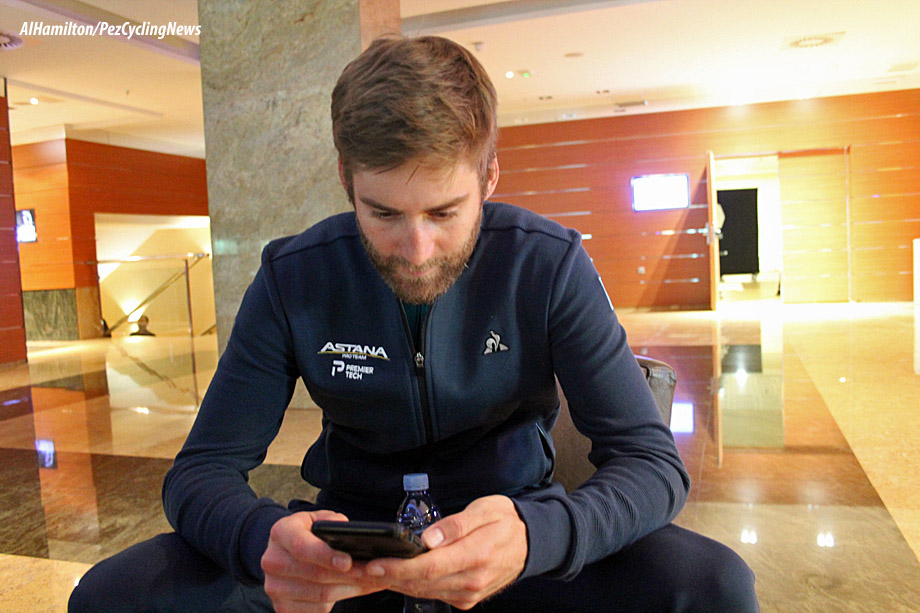