Catching Up With Cervelo’s Dan Fleeman

Back in August, when we spoke to Dan Fleeman (GB & AN Post) about his excellent win in the Tour of the Pyrenees, we asked him what 2009 had in store; “there are irons in the fire,” he told us cryptically. To be specific, a Cervelo “iron,” as young Mr. Fleeman becomes the second British ‘Dan’ to join new ‘super squad’ Cervelo Test Team, alongside his namesake and amigo, Daniel Lloyd.

PEZ: You’re originally from Burton on Trent, home of the UK brewing industry, what’s your favourite beer?
Dan: I’m not really a beer connoisseur, you need ask Dan Lloyd about that – he’s an expert! I’m more of a lager man. 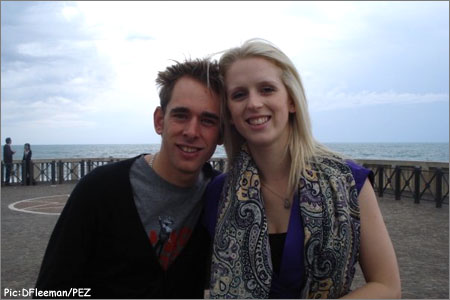 We’ll cool it with the bike pics for this interview and do a little picture essay of Dan’s recent trip to Roma with his wife.

PEZ: Your contract with Cervelo Test Team has been a bit of an ‘open secret.’
Dan: I think rather than release the names of 25 riders at one time they’re releasing one or two every couple of days to keep the interest going.

PEZ: Is it true that you and Dan didn’t know you were headed for the same team until pretty late in the day?
Dan: Yeah, we have different agents and all we knew was that they were talking to a ‘new team.’

It was all hush-hush because Carlos Sastre was still with CSC and they wanted no ‘leaks.’

Dan found out a few days before I did and when I started to tell him about my new team, he knew already! 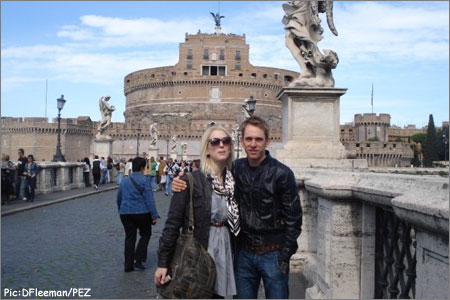 PEZ: You’re on the ‘Sastre Plan?’
Dan: That sounds a bit suspect, doesn’t it? Whilst he’s obviously at a much higher level than I am, we’ll be riding the same type of events in the early season – stage races in Spain; those suit me down to the ground.

Carlos’s whole season is geared at his being in top shape for July and I’ve heard that he’s not the kind of rider who demands a lot from his domestiques if he’s riding an event for training – he gives them a lot of freedom. I’m really pleased because up until now in my pro career I haven’t been riding a lot of races which suit my abilities as a rider.

PEZ: Has Scott Sunderland (DS) been in touch?
Dan: He’s emailed me to introduce himself and told me to get back to him with any questions; I’m going to give him a ring for a chat this week.

PEZ: Only your third pro season and you’re in the ‘Big League’ – you must be a happy man?
Dan: Yeah, I was pleased to get asked to ride for DFL in 2007, and even if racing in Belgium didn’t really suit me – as a climber – it was a terrific learning experience.

I had no previous measures, so every race there would be something else to take on board. I got better results than I expected last year, but this year with AN Post has been a different level again, I’ve progressed so much.

PEZ: Was there a ‘clincher’ ride for the contract?
Dan: The Pyrenees; my agent, Martin McCrossan was speaking to teams all year and the answer was always the same; ‘we need to see a big win.’ Once I took the jersey in the Pyrenees, he was SMS-ing me all the time; “whatever you do – win this race!”

Apart from the Pyrenees, I had my best performances in the Tours of Ireland and Britain, but by that time the contract was agreed.

PEZ: Do you know many of your new team mates, apart from Dan?
Dan: Jez Hunt, a little from talking at races, he seems a cool guy; Serge Pauwels from last year’s Tour of Britain – we were in a break together. 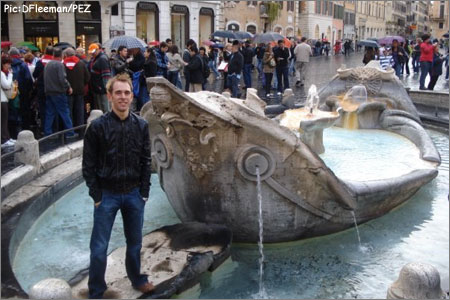 PEZ: You raised you game for the Tour of Ireland and Britain?
Dan: I wouldn’t say that I did, I actually had better form for the Pyrenees. Dan, Steve Gallagher and I went to the Pyrenees to prepare for that race and we trained like crazy there for ten days.

I was hoping to have good form for the British Tours, but I hit form sooner than I thought I would and decided to go for the win. I was actually sick after the Pyrenees, but I think it did me a favour because I had to rest, and I was able to extend my period of from.

The first couple of days in Ireland weren’t too hard, so I had a chance to ride myself in. I had targeted top ten for both Tours – I was only a few seconds outside the top ten in Ireland, but comfortably within it in Britain, so I can’t be unhappy.

Last year there were two weeks between the two races, this year it was only five or six days which made it easier to hold your form. I let myself recover, then did some motor pacing between the two events and it worked perfectly – it’s just a pity I had punctures at bad times in the T of B. 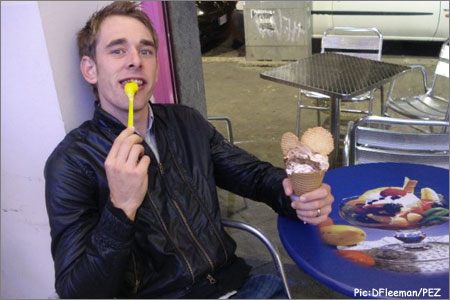 PEZ: Winter prep – up to you, or does the team tell you what they want you to do?
Dan: I’m not 100% sure; Scott Sunderland said he’d be sending information about training camps. I told him that I have my own coach, Hunter Allen who is one of the most knowledgeable people in the world when it comes to training with power metres and he’ll be making sure that I’m firing on all cylinders for the start of the season.

I’ve actually started for next year, I’d hoped to do the Worlds, train for a week or two after that, then have a break of two weeks. But as it happened, I didn’t get the Worlds ride, so I’ve had my break and I started for 2009 yesterday.

I don’t want to get stale, so I’ll be doing mountain bike and gym work throughout October. I have really strong legs, but my core strength isn’t the best, so for the first time, I’m doing gym work to strengthen myself.

I want to work on all those muscles that ordinarily you might neglect, but which are vital.

Today I did two hours in the gym, three hours on the mountain bike plus a stretching session. 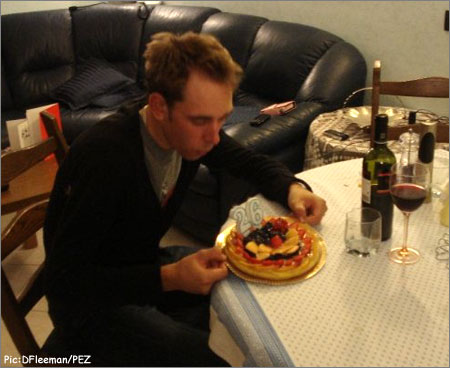 PEZ: How about those new toys at Cervelo?
Dan: I do like nice equipment and I’ve been on the Cervelo website having a look at the frames. I use Speedplay pedals already and its great were on Zipp wheels – they offer so much choice.

One thing I would like for next season, is a time trial bike at home, so I can train on it, I’ll never be an awesome time trial rider, but I want to improve; last year I started to ride the time trial bike once a week for longer runs – maybe three hours – in training and I definitely noticed the difference.

Before I used to get on my time trial bike at a race and it felt completely alien. The thing about a TT bike is that the position is so extreme, in order to get the best aerodynamics it affects your power output – you drop maybe 20/30 watts, but the specialists like Leipheimer and Zabriskie have that gap narrowed to only five watts. 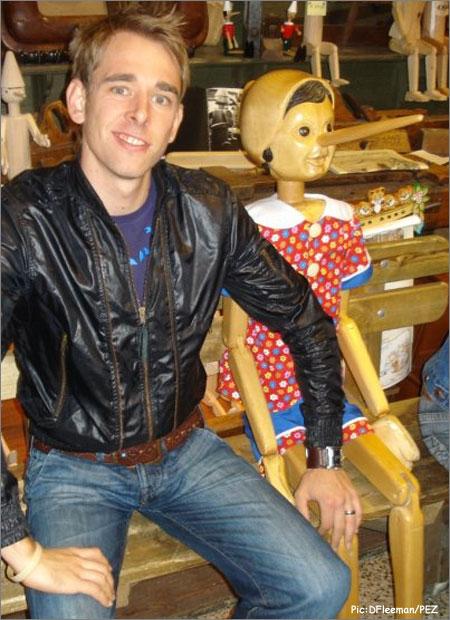 PEZ: 2009 goals?
Dan: I haven’t sat down with the team yet, but my number one goal is to ride a three week tour, I need to do that to take me to the next level.

The big goal is to prove I’m a serious rider – I’d love to be one of Carlos’s domestiques in the mountains.

PEZ: Lance?
Dan: Initially I thought it was a ‘wind up,’ but it looks serious now. I don’t know what he’ll achieve, but if it is for cancer awareness, then that’s a good cause. 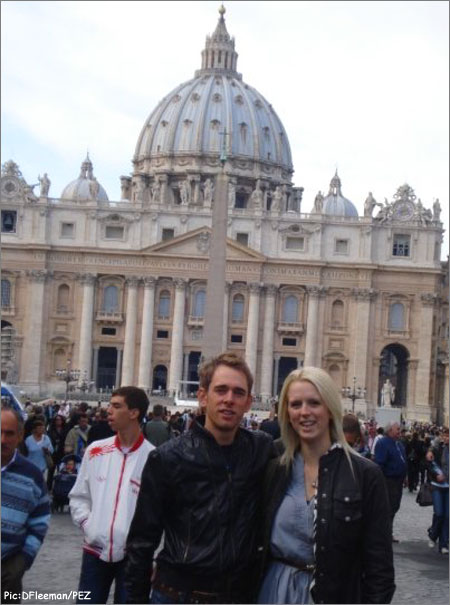 PEZ: Schumi?
Dan: It’ll be interesting to see who else’s names crop up. I hope there’s no one from teams who have ‘internal testing’ – that would mean they were a mockery, a charade.

It really seems as if the testers are ahead of the cheats, but some riders are just not learning that lesson – but I guess there will always be people with no scruples?

We’ll be talking to Dan again after the team’s first training camp, but in the meantime – keep pumping that iron, man!