It’s two years since we last spoke to Leda Cox, she’d just signed up with Italian ladies pro team, Sacarelli and was looking forward to big things; but 2007 wasn’t a great year for the girl from Saint Albans. Fast forward to 2008 and eight wins in the US, not to mention the last round of the French Cup made for a much better twel’ month – as we say in Scotland. We caught up with Leda recently, when she was on the road to recovery from flu.

PEZ: Classic Feminine Vienne Poitou-Charentes, that’s a biggie, Leda?
Leda: Yes, it was a big one to win, I didn’t realise how big a race it was, until after I’d won it. I’d had a bad crash the week before and hadn’t been feeling too good. The manager said that because I wasn’t feeling great I didn’t have a job to do and could ride my own race. The win gave us the overall in the team competition of the French Cup; that made my manager happy – and that’s the main thing, isn’t it? 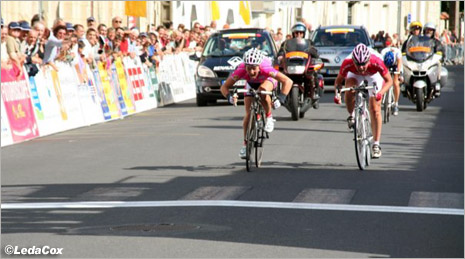 Leda taking the win in France to finish the 2008 season.

PEZ: Your husband, Jez is a successful duathlete and coach – why doesn’t he advise you?
Leda: I think it would affect our relationship – I wouldn’t listen to him! I’ve just got myself a coach; it’s good to have someone to bounce things off.

PEZ: Sacarelli?
Leda: The team folded at the end of the season, it just wasn’t a good year. 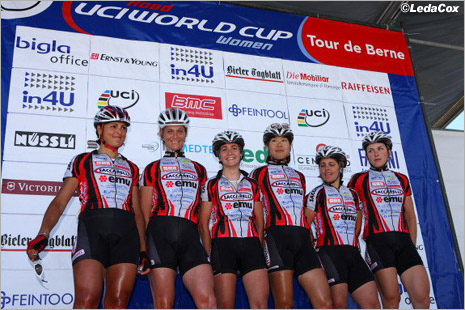 The time in Italy with Sacarelli was well spent, but the team folded going into ’08.

PEZ: Then you had a bad experience with a team “false starting” at the start of 2008?
Leda: Yes, Rapha-Immune System Bank; let’s just say that there were a lot of good ideas which perhaps seemed a bit too good to be true. I was suspicious and not too surprised when the person concerned pulled out. But it was late in the day and all the teams had completed their rosters.

PEZ: You went to a US team?
Leda: After the Rapha situation I was left in the lurch. I thought about going to Belgium but in the end I decided to go to the States where I rode for Team America’s Dairy. 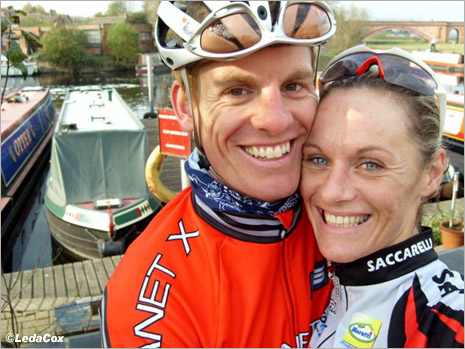 Leda always has her man, Jez, to bounce things off of, but he won’t be training her anytime soon!

PEZ: You had eight wins in the US?
Leda: Yes, it was a good team and I got the results, including the overall in the Tour of Tuscon. It was a good experience and it gave me my confidence back – I was winning, but wanted to get back to Europe again.

PEZ: How does the US scene compare to the Euro scene?
Leda: It’s very different, there’s a lot more support on European teams – there’s usually a mechanic and a soigneur. In the US there’s a lot less support, you have to wash your own bike and fill your own bottles before the race, for example. And if you’re away at a race, you might well just have accommodation provided, you’d have to cook for yourself.

The prize money was good though, you could pick up $250 for winning a 45 minute criterium. I think it’s more fun in the States, not as tough as it is in Europe. A thing that amazed me – in one race, we stopped for a ‘pee break’ the organiser stopped the race and I was thinking; “what’s going on here?” I was giggling to myself; I was trying to imagine a European organiser stopping a race and saying that! 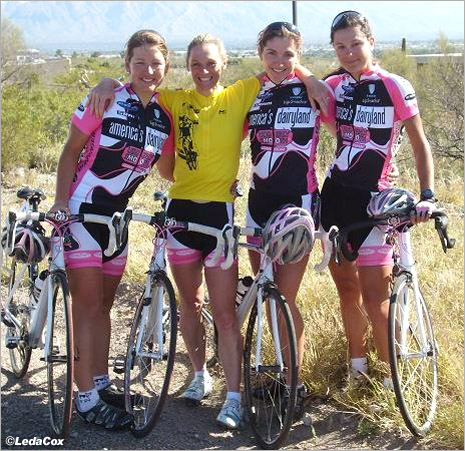 Leda had a successful exploit in the United States, but the aim was always to get back to Europe.

PEZ: You were snaffled by a French team, in Canada.
Leda: I was guesting with the NEBC team for the Tour of PEI in Canada – and I just knew going into that race that I was ‘pinging.’ The manager of the French ESGL-Gestion saw the way I was riding, approached me and asked me if I was interested in a contract. I started with them the following month.

PEZ: How did Dairy Land react?
Leda: They accepted it, I’m not saying they liked it, but the thing is that my ambitions are quite high and I had to move – do what’s best for me.

PEZ: This will be your sixth international season, what changes have you seen?
Leda: I don’t think the money has changed, having said that, it was good money for winning that French Cup. The racing in Europe is always hard and I think that 2008 was even harder than usual due to it being Olympic year.

PEZ: Will you be French based for 2009?
Leda: Yes, I’ve been talking to my manager about getting me a place. Travelling from the UK would be too tiring and I don’t particularly like flying – especially after a race. 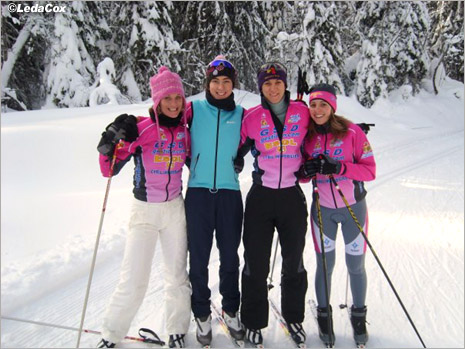 Leda with her new teammates at their ‘bonding’ camp in Chambery in December.

PEZ: Team leader for 2009?
Leda: Yes, one of two, I’m looking forward to that. There are a couple of really good French junior girls stepping up to the team in support – so it’s an exciting prospect. We have our a training camp on February 21st in Spain, I’m looking forward to that. We had a ‘bonding’ weekend at Chambery in the French Alps in December where we went Nordic ski-ing and trekking. I’ve never been involved in anything like that before; it was a great experience.

PEZ: French will be the team language?
Leda: Yes, I’ve been doing home study and I picked up some more words at the bonding weekend. I’m not bad at languages; I picked up italian nicely, so I don’t think it will be too much of a problem. Our manager is keen for the girls in the team to improve their English – his is good, until I get excited and start talking too fast for him.

In the French Cup I was away with another girl and I dropped back to the car to ask him what to do; but I was talking too fast and he couldn’t make out what I was saying. He just pointed up the road, I looked, and the other girl had jumped me! Fortunately, I caught her, and won! 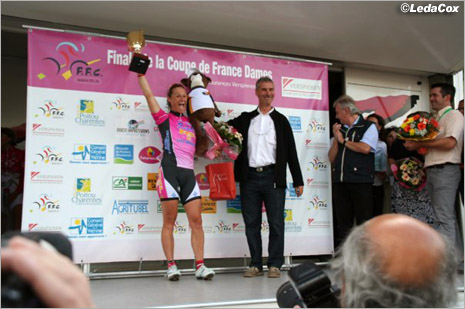 Leda on the podium after her biggest win to date – Classic Feminine Vienne Poitou-Charentes. She’ll be looking for more of these moments in 2009 and beyond.

PEZ: Shouldn’t we be seeing you in GB teams?
Leda: I rode with GB in the Tour de l’Aude with Nicole Cooke, Emma Pooley and Sharon Laws – that was a great experience. But I think that because I’ve done my own thing, it perhaps hasn’t stood me in best stead. I’ve seen some girls who have been part of the system and then get kicked off, they’re lost, they don’t know what to do. It would be great to ride for GB more, who doesn’t want to ride for their country? But I just have to get on with my career.

PEZ: Your 2009 goals?
Leda: Win more! To ride and win UCI races; my coach and I have been looking at the UCI calendar and the races I’d like to do well in. The Tour of Montreal is one, and the British National Championship is another. June and July are the key months when all the Tours are on in France, so I want to be going well for them.

***
Just in case you think that females who do all that racing lose their ‘girly’ tendencies – I asked Leda if we could use some of her website pics; “yes, but only on condition you use ones where I look nice!”

With thanks to Leda and wishing her all the best for 2009.