Ex-rider Interview: There was much sadness amongst the PEZ Crew when we heard that Mark McNally didn’t have a contract for the 2019 season after being let go by Wanty-Gobert at the last minute. Where is he now? Ed Hood found out. 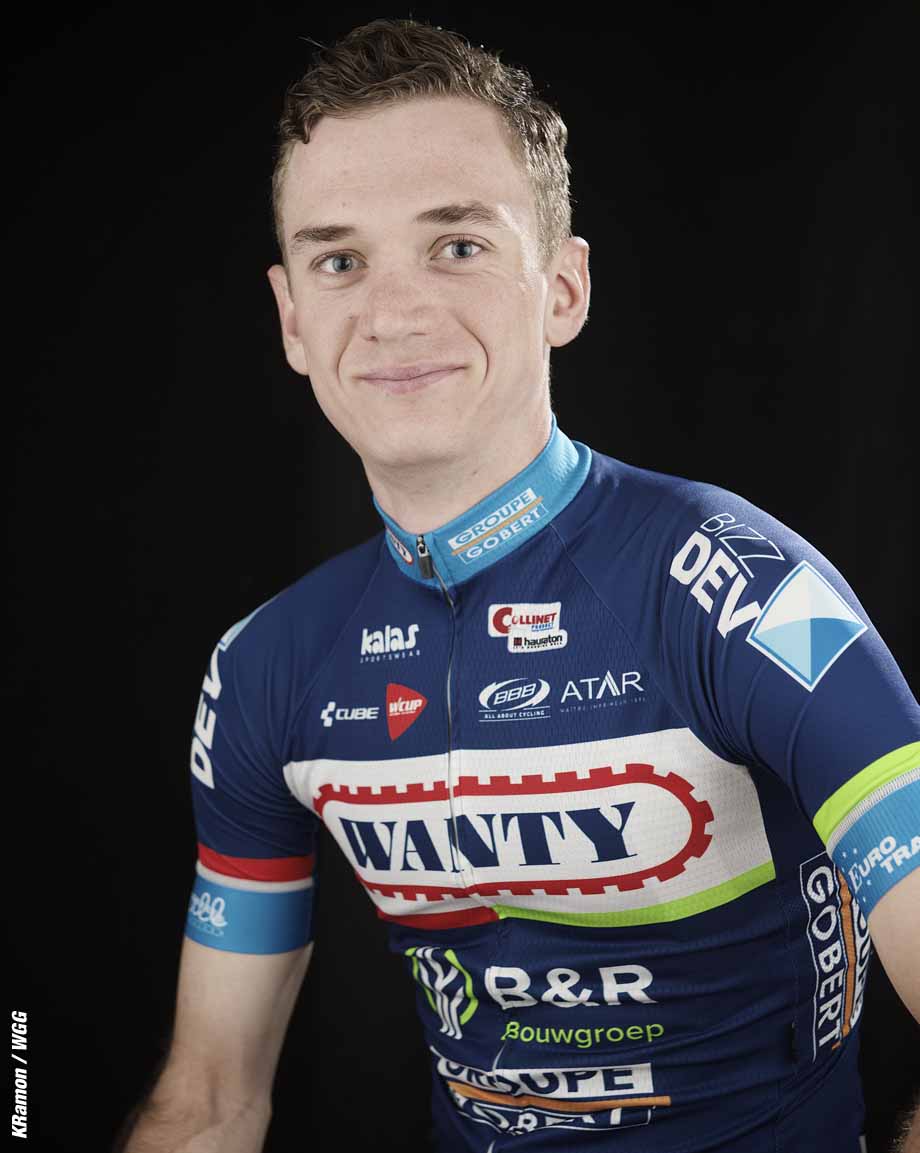 We’ve opened the ‘whatever happened to’ file again and this time it’s Liverpudlian gone Flatlands native, Mark McNally. It was PEZ mentor and expert on all things Belgian, Viktor suggested that we contact the man originally from Liverpool but who has now made Belgium his home. His last season was 2018; with his Wanty team notifying him, by post, on October 1st that he was not being retained for 2019 – the latest date Belgian Federation regulations allow. With many deals for the following season concluded at the Tour de France, as the weeks roll on the chances of getting signed fade with the summer sun and 2018 was McNally’s last season jousting with the biggest names in the sport. We felt that his five years with cult Belgian continental squad AN Post and three years with ‘punching above their weight’ Belgian pro continental team Wanty shouldn’t be allowed to end without comment; we caught up with him as the first signs of ‘lock down’ easing in Belgium began to appear. 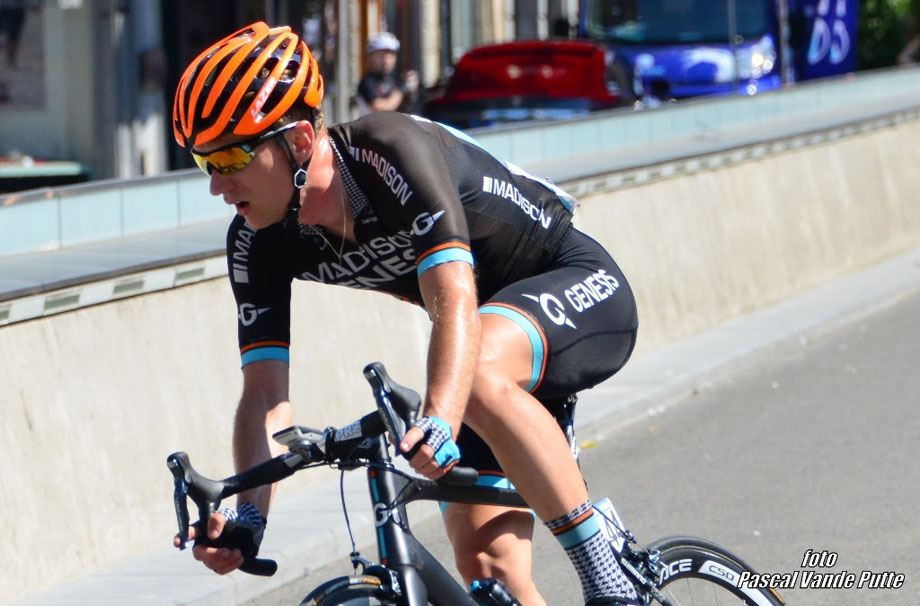 PEZ: Your first pro contract was with the Halfords-Bikehut team in 2009, Mark?
Mark McNally: Yes, before that I was on the British Cycling Academy, then the GB national squad based in Manchester in the winter and Quarrata in Tuscany with guys like Ben Swift, Andy Tennant, Pete Kennaugh – a great bunch of lads. Halfords was a good team too, we won the Tour Series criteriums overall classification. Rob Hayles was in the team, he was riding in the National Road Race Champion’s jersey; along with Ian Wilkinson they were the experienced ‘wise men’ on the team. Keith Lambert was manager and things were well organised. 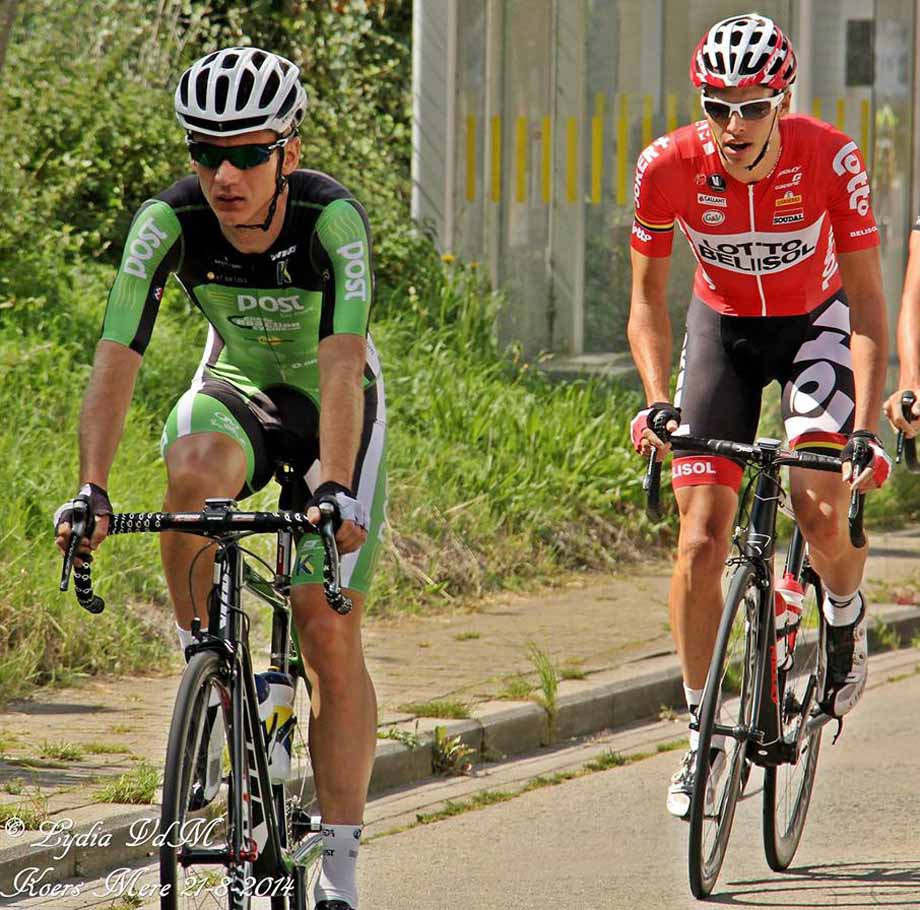 PEZ: How did the ride with AN Post come about?
I rode the Ras in Ireland with Halfords and won the best young rider award, that was where they spotted me and Keith put in a word for me. I got a phone call around November time offering me a ride with the team. I went to live in Belgium and was on two training camps in Calpe before my first race, which was the Marseillaise where I got punted after 50 kilometres. The next race was Besseges where I was going a bit better. After Besseges we drove back to Belgium but the skylite on the camper van wouldn’t close properly; going through the mountains Ronan McLaughlin and I had every stitch of clothing on to try and keep warm – great memories. 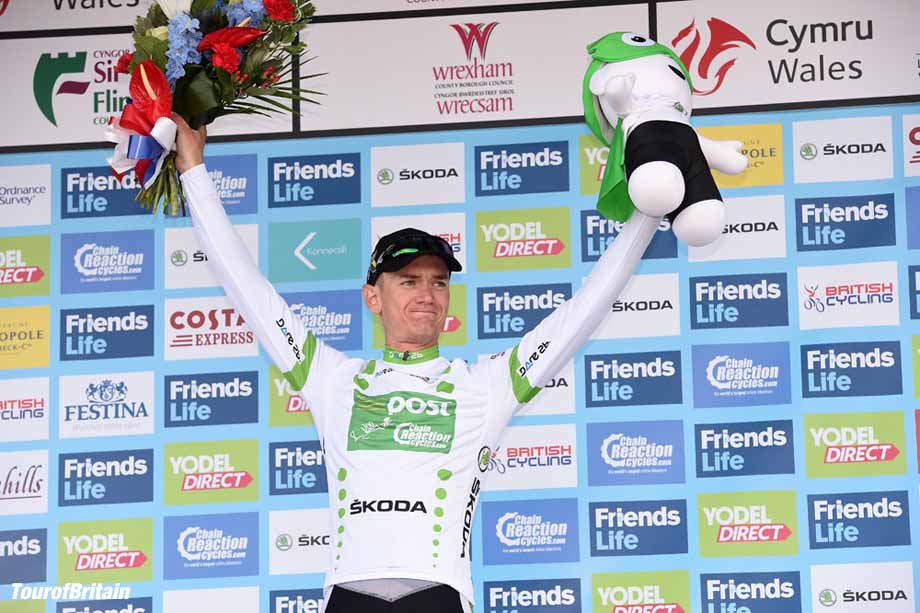 PEZ: Five seasons with AN Post.
That was another bunch of good lads, we were all young and whilst we didn’t have the best we had enough of what mattered and were well looked after. There were some good boys came up through that team – Sam Bennett, Andy Fenn, Shane Archbold, Matt Brammeier. . . I think my best year there was my second one, 2011 when I won the Mi-Aout-Bretonne stage race in France. That year I was classified as one of the top 100 riders on the UCi European Tour which I had hoped would mean a move up to a bigger team but it didn’t materialise. My last season with them was 2014, Kurt Bogaerts our team manager said that it was time for me to move up and on, get a change of scene. I won the King of the Mountains in the Tour of Britain and Roger Hammond who was with the Madison Genesis made me an offer to join his team; I moved and was well looked after by Roger. 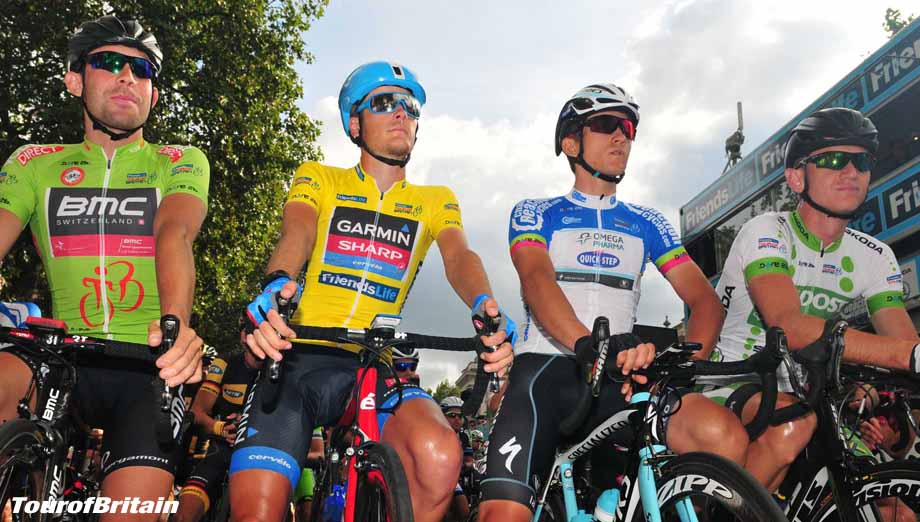 PEZ: How did the Wanty ride come about?
Roger knew Hilaire Van Der Schueren and Cube, Wanty’s bike sponsor wanted an English guy on the team. When I was with Madison we did a block of racing in Belgium and during that I won the GP Lucien Van Impe and was third in the GP Jef Scherens where I was away with in the break with two Wanty guys, Bjorn Leukemans and Dimitri Claeys – Wout Van Aert was fourth – and I got talking to the team after that. Then in November I got the phone call offering me the ride. My then girlfriend, now wife and I had been living in England for a year but she hadn’t taken to it so it was a good move, back to Belgium. 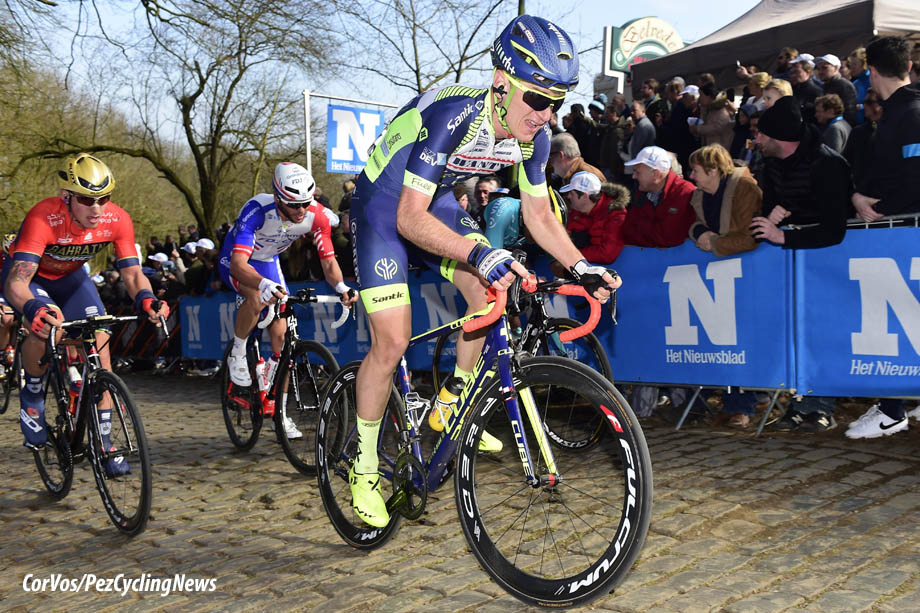 PEZ: I’ve heard it said that Hilaire is a bit of a ‘sergeant major’?
He’s ‘old school’ Belgian, it’s a very hard sport, if you think it’s easy then you’re in for a shock. He doesn’t take to folk messing about. He’s been around the sport for a long time; for me a lot of the attraction of cycling is the history. Teams come and go, especially the ones that say they’re going to, ‘do things differently’ – there’s no need to re-invent the wheel. Like I say, Hilaire’s old school and understands the sport. 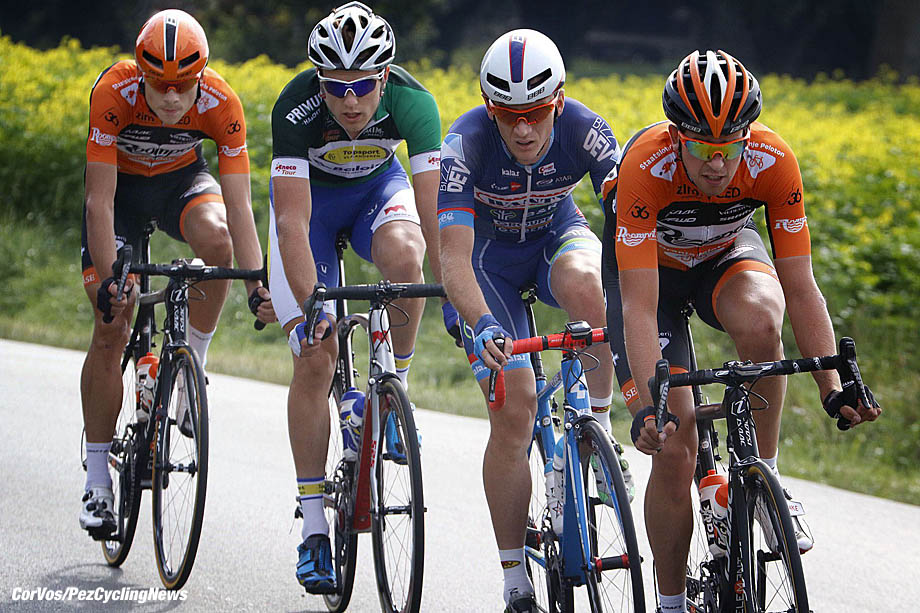 PEZ: How was your acceptance on that most Belgian of Belgian teams?
I speak Dutch so that helped a lot but I like to think I’m an easy going guy and can get along with people. And the team was quite cosmopolitan with three Italians, Simone Antoni, Enrico Gasparotto and Marco Marcato – then there was the German rider Bjorn Thurau and the Frenchman Guillaume Martin too. 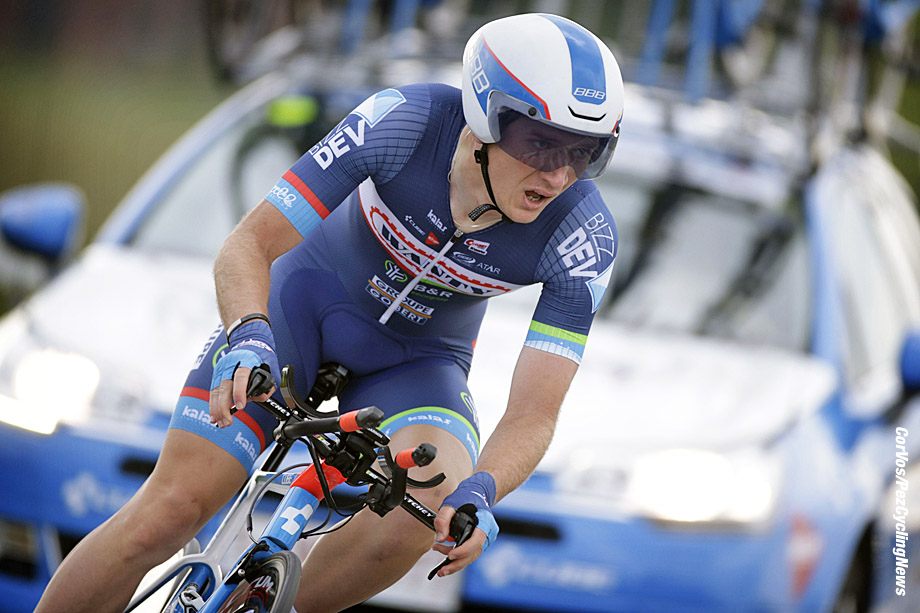 PEZ: Tell us about the highs and lows at Wanty.
My first year was my best; I was second in the Ronde van Drenthe and did a good ride in the Eneco Tour; fifth on one stage, caught on the line and second in another where Luka Pibrnik the former Slovenian Champion beat me in the sprint. On the subject of ‘highs and lows,’ we went through absolute misery that year when our team mate Antoine Demoitie crashed then was hit by a motorbike and died, in Gent-Wevelgem on March 27th – he was only 25 years-old. Then there was the joy of a Classic win for the team with Enrico Gasparotto in the Amstel Gold on April 17th. When I was AN Post I’d ridden all the Belgian semi-Classics but that was the first season of riding at full Classic level and to play my part in Enrico’s win was special. 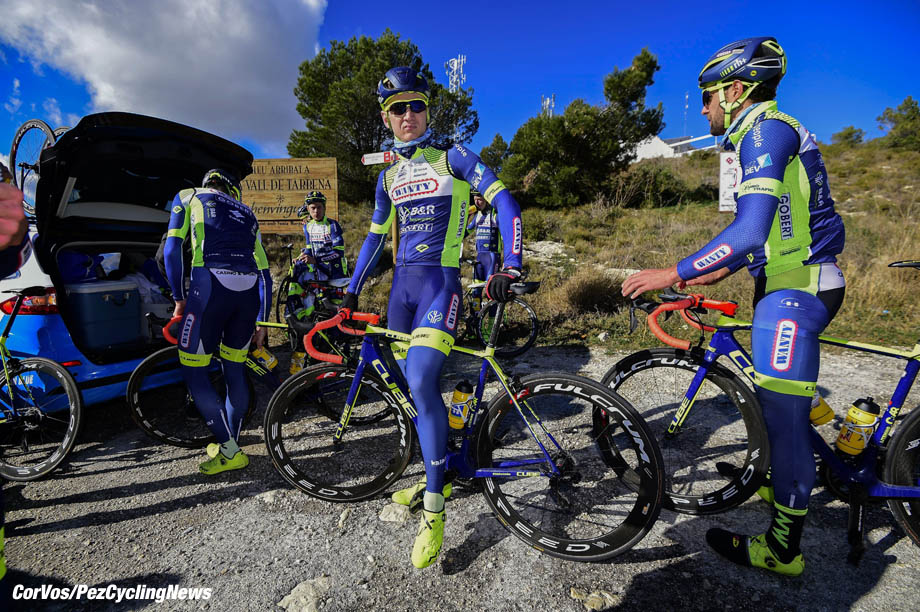 PEZ: Did Wanty give much notice of letting you go?
You can read the signs but it wasn’t until October 1st I got the official letter in the post to tell me. I tried to find another team but it was very late in the year and I’d just become a father at that time and the sport had changed during the time I was in it. In 2018 Michael Goolaerts died after crashing in Paris-Roubaix and it makes you think, is it worth taking all these risks? I don’t know if the sport became more dangerous during the time I was in it; and if I’d got a ride with another team I might still be there – but it did change. Tim Harris and I had a discussion about this the other day, I think there’s less respect in the peloton now; Tim reckons it’s always been a ‘dog eat dog’ sport – but I think the finals are crazy now and get worse as the season end approaches. 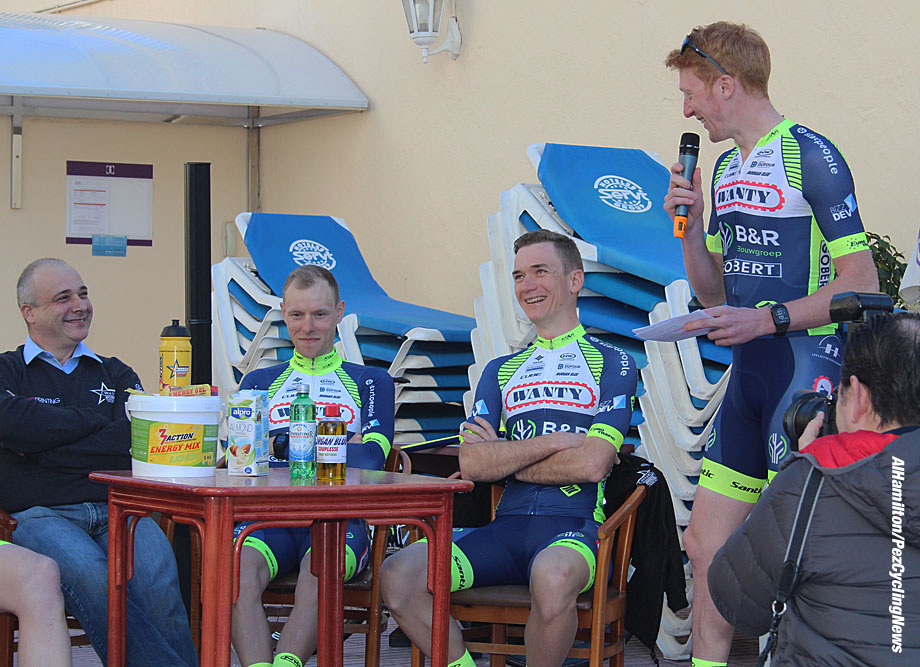 Introductions at the 2018 presentation

PEZ: Guys scrabbling for a contract?
By September there’s a culture of desperation among the small teams, unless the UCi have changed it then your best eight riders on the team on the UCi European Tour rankings count, if you’re not one of those eight then. . . Perhaps it was a blessing in disguise that I stopped when I did, there will be teams fold at the end of this year for sure and the other teams will just sit and wait and wait as the price for riders drops lower and lower. 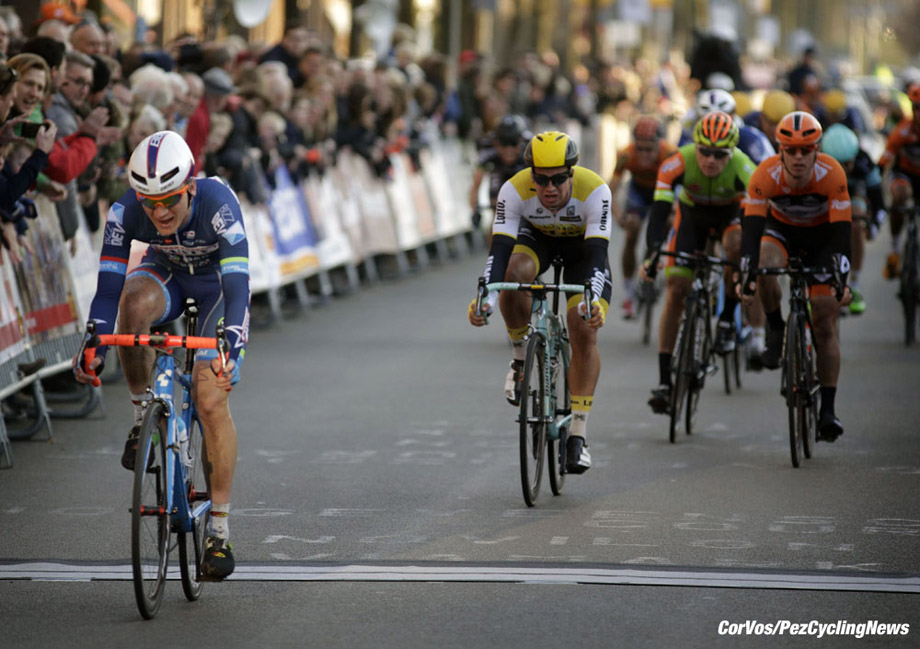 PEZ: Was there a ride during your career which gave you most satisfaction?
I enjoyed working for the team; in Flanders in 2017 I was in the break, with AN Post, as I said I had ridden the Belgian semi-Classics but never a Monument. To be first up over the bergs with the huge crowds and the smell of frites, beer and dried fish it was a dream. 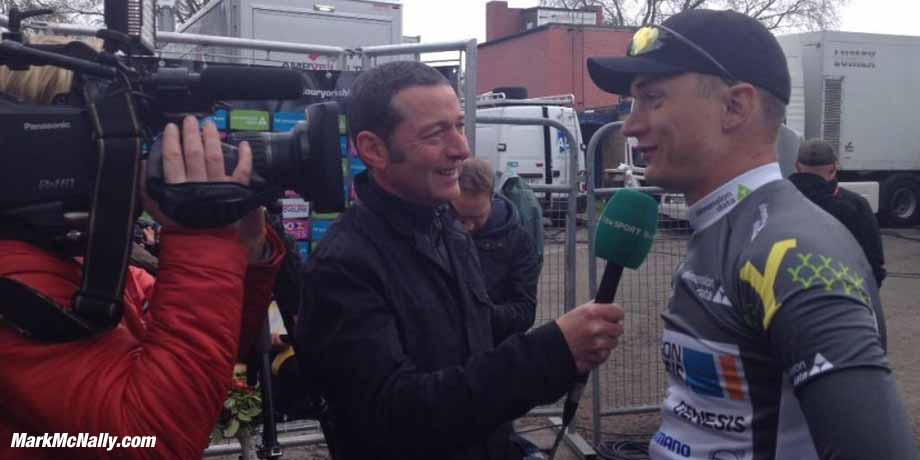 PEZ: If you had your time over?
I’d like to have ridden a Grand Tour but it’s easy to say that I should have done this or done that but for the talent I had I think I did all right, I had a good run. It’s the way of things that you have to be the kind of rider who’s always thereabouts or the type of rider who pops up and delivers a couple of wins each year. My second last race was Philippe Gilbert’s ‘comeback’ race, the GP d’Isbergues; he won it with Christophe Laporte second and Florian Senechal third – I was fourth. If I’d made the podium that day then things might have been different for me but then there are a lot of, ‘ifs’ in pro cycling. 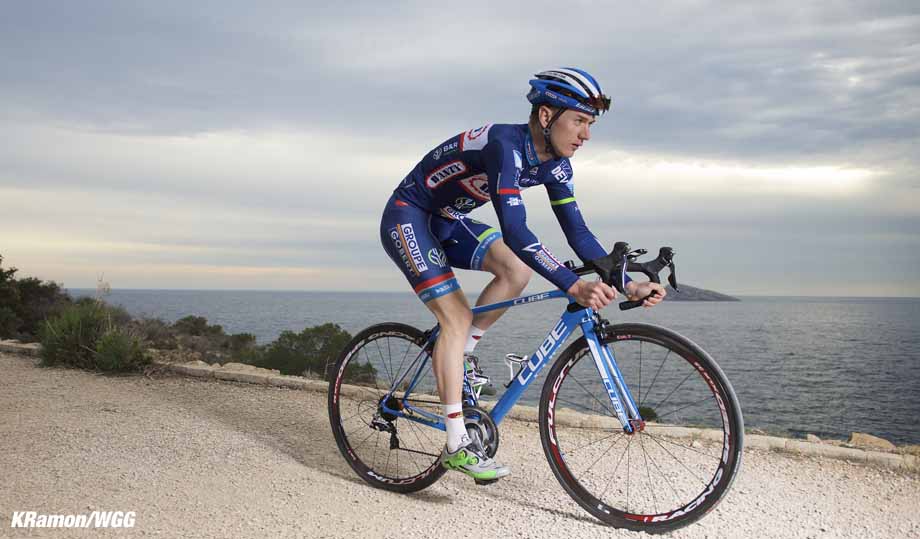