When we saw Radio Shack’s Kiwi, Jesse Sergent win the stage four time trial at the Eneco Tour we decided we’d best have a word – but by the time we’d contacted him and prepared this interview, he’d gone and won the time trial and GC in the Tour du Poitou Charentes.

Sergent is only 23 but in his first season as a full pro has taken the TT and CG in the Three Days of West Flanders as well as the three victories we mentioned above, to give him five wins – when you consider that he beat HTC’s Danish flyer Alex Rasmussen to win the Eneco time test, it’s not hard to predict a big future for the man from Feilding on New Zealand’s north island.

In 2008 he was a member of New Zealand’s Olympic bronze winning team pursuit squad in Beijing. 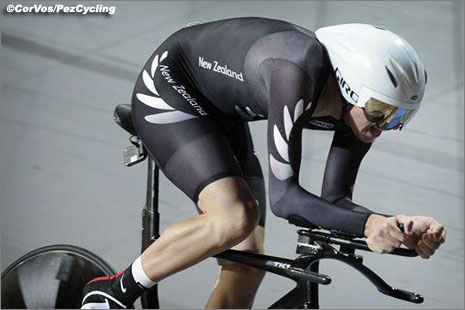 For 2011 he stepped up from the U23 team to ‘The Shack’ and on the way to his brilliant debut road season took another Worlds individual pursuit silver.

PEZ: Congratulations on the Eneco stage four win; it must be tough to TT at your best in the middle of a race like that?
Jesse Sergent: Yeah, we had a prologue then three stages so there’s a bit of racing in your legs; and the season is well on so everyone is fit – especially the guys who have ridden the Tour.

And all that rain takes it out of you; not to mention the pot holes – there’s always something going on in that race.

We all complain about it, but we’re all on the same roads and I guess it’s just part of the fun!

PEZ: In West Flanders you took the prologue and then defended for the two road stages.
JS: I was lucky because I had a really strong team around me and a great DS in Dirk Demol – without them it would have been impossible.

Guys like Gregory Rast and Sebastian Rosseler are very experienced and they’ve been in stressful situations before, so they know what’s required.

The last stage was very windy and it was all about positioning, you had to be at the front – the only thing was that there were 200 guys with the same idea! 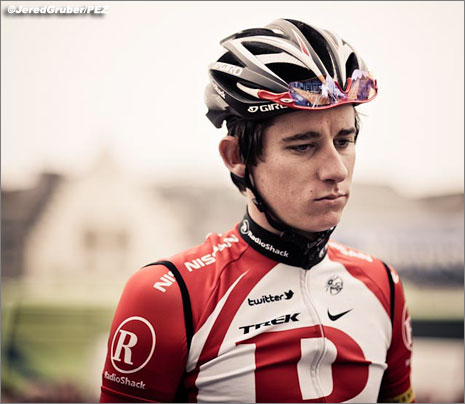 PEZ: How did you get the Trek-Livestrong ride?
JS: After the Olympics I was getting help with my career from a guy called Craig Adair, back in New Zealand; he has connections with Trek, and I know Ron Cheating the NZ importer for Trek – and there was my connection with Taylor Phinney from our pursuiting, all of that came together for me to get the Livestrong ride for 2009.

PEZ: Livestrong to The Shack – how much of a jump?
JS: The actual racing is the biggest jump because you’re so well looked after at Livestrong – bikes, TT bikes, support staff and the race programme wasn’t massive; it let me target virtually every race.

They didn’t race you into the ground and that was good for me, coming from the track.

I enjoyed the stints in Oman and Qatar early season and our time in Europe in May and June.

I was a stagiaire with Radio Shack at the end of 2010 and that let me see what the Pro Tour level was really like – it motivated me to get out training whilst I was back in New Zealand for the European winter.

PEZ: Where’s ‘home’ in Europe?
JS: Gerona, I stayed there with my team mate Sam Bewley for spells in 2010 and there are so many people to train with – Hayden Roulston, Greg Henderson, Jack Bauer and all the Aussies, too.

If you get a problem with something there’s always someone to help and the training routes are awesome – into the mountains or along the coast.

PEZ: How do you fit in specific TT training?
JS: Up until recently I didn’t have a TT bike at home, but since I got one it’s given me a big lift and I’ve been getting out on it.

What I tend to do when I’m home from races is to do my recovery rides then fit in time trial training when I can, after that. 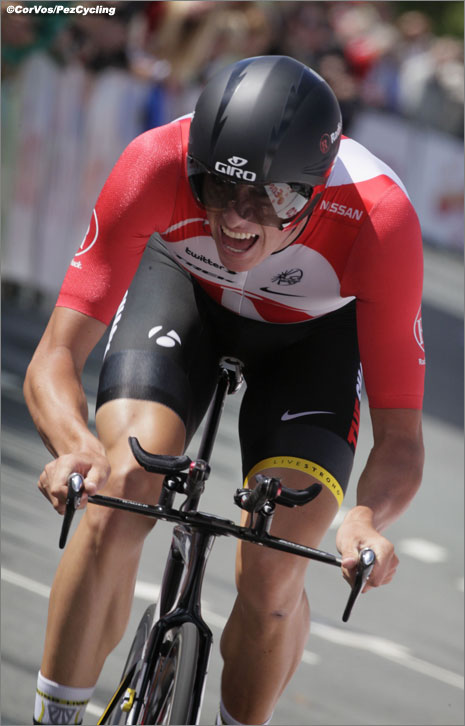 PEZ: Your TT position is pretty radical.
JS: Yeah, that position comes from my track work – where you make little aero adjustments – and I took it to the road.

Although there’s the aero aspect you have to be comfortable – I spent a little time in the wind tunnel in 2009, but really the position is the one I naturally fell into.

PEZ: The Road Worlds?
JS: New Zealand has three selections for the road race and two for the time trial – I’m on the ‘long’ list and looking to ride the TT.

I’ve been thinking about it, but it’ll be the first TT I’ll have done that’s over 40 K – the Worlds is 46 K and I have to get exposure to that kind of distance.

I won’t put myself under too much pressure; it’s more about adapting to the distance.

PEZ: The Olympic team pursuit?
JS: One of my goals is the London 2012 team pursuit – not the individual time trial; I see the track as my best chance for success and there’s no individual pursuit anymore.

New Zealand still has the six guys from the Beijing medal squad but we also have young guys pushing up – we’ll use the Worlds in the spring as a stepping stone.

It’s hard to say exactly how my road programme will be next year, but the team was very supportive of my Worlds preparation this year and for me it’s ‘full gas’ for London. 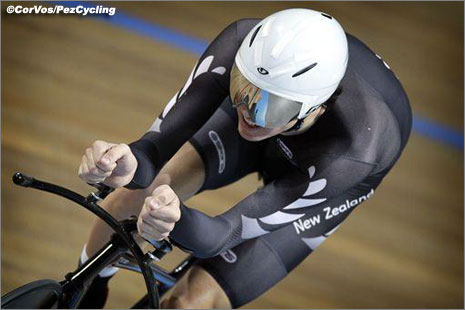 PEZ: Bradley Wiggins had to lose weight to fully realise his road potential.
JS: It’s definitely a big topic and it does make a difference; but I’m young and it’s not something I’m going to get carried away with – but I do watch what I eat.

PEZ: Who coaches you?
JS: It’s my first year at this level so I get a lot of advice from my DS here at Radio Shack, Dirk Demol.

But the man who has been my mentor all through my track days is Mike McRedmond from back home in New Zealand; he’s the one who’s worked with me on my track efforts and power.

PEZ: Is it home to NZ for the Euro winter?
JS: Yeah, I go home after Paris-Tours – but I’ll have to ride some track; we have to qualify for the Olympics through the World Cup.

My first road race will be the Nationals in January. 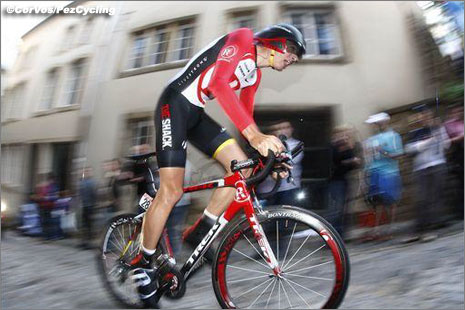 PEZ: 2012?
JS: The Olympics are a big goal and I’d like to ride a Grand Tour, for sure – not the Tour de France, not with the line up this team has.

But I think the Giro or Vuelta is do-able; and I want to have good start to the season.

***
You’ve been warned – with thanks to Jesse and to Shack PR Phillippe Maertens for his help in organising the interview.