Catching Up With Superstar Chris Hoy!

PEZ has been stalking him since Beijing; and at last, we’ve cracked him – Chris Hoy, Olympic gold medallist in the team sprint, keirin and individual sprint.

We’ve heard that he now retains Max Clifford, “PR guru to the stars,” as his agent, so we decided we’d better check out the financial aspect of the interview, first.

PEZ: Will Max charge us, if he finds out about this interview, Chris?
Chris: The invoice is already in the post!

PEZ: What’s the daftest question you’ve been asked?
Chris: There’s the one about; “why are you not riding The Tour?” and there are the standard ones that I’ve answered a hundred times; “what’s it like standing on the podium?” and “is the medal real gold?” 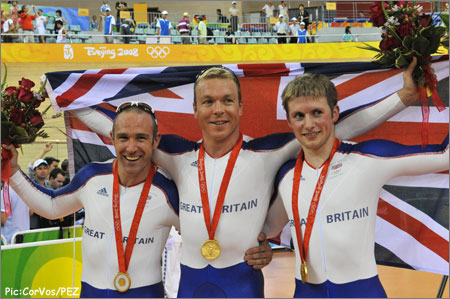 PEZ: In Athens you took one gold; in Beijing it was three; what’s the difference in terms of media attention?
Chris: It’s a whole different scale altogether; one gold gets you attention, but if it’s a track and field gold or a multiple medal win then it’s just mad. You wouldn’t believe what it’s like – just a constant demand for interviews and personal appearances. It’s very exciting, but I simply haven’t had any time to myself. Since I came back I haven’t had a single chance to go out and have a bite to eat and relax with my friends.

PEZ: Your favourite Beijing moment?
Chris: At the very end, after I’d won the individual sprint because I could finally relax and enjoy the moment. After the team sprint and keirin there were still other events to come, so I couldn’t switch off. 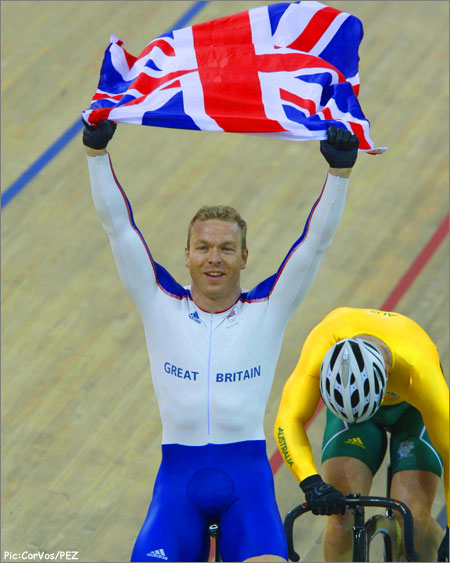 PEZ: Do you think the GB domination at the Worlds in Manchester meant that a lot of your rivals were beaten before they started?
Chris: I don’t think so, Sireau (France) gave an interview in Beijing where he said that he didn’t think that the GB team sprint squad would go as well in Beijing because we wouldn’t have the advantage of the home crowd. When I heard that, it was a huge boost to me – because I knew we were going even better that at Manchester!

PEZ: Sireau and Bos (Netherlands) didn’t seem to have any ‘sparkle’ in Beijing.
Chris: I think they were shell shocked after we broke the world record in the qualifying for the team sprint. The French team was on the line after us and I could see in their eyes that they were stunned by the ride we had just turned out. I think that qualifying ride high lighted the gulf we have created between ourselves and most of our rivals.

PEZ: Jason Kenny (GB) – in the winning team sprint squad and second to you in the sprint.
Chris: It’s not just the physical aspect – he also has the right temperament for training and competition. He was a big factor in the team performorming so well – he pushes us, keeps us on our toes. I don’t think there’s any doubt that one day he’ll beat me in a big competition. His presence is a challenge, and I need that to keep me fighting.

PEZ: La Paz and the failed kilo world record; any “with hinsights” and will you go again?
Chris: It would take a lot to get me to go again – like the kilometre being reintroduced to the Olympics. As for La Paz, more time would have been good and little things, like using an aero helmet instead of my sprint helmet. But the more time you are there, the more it costs and the budget was tight. 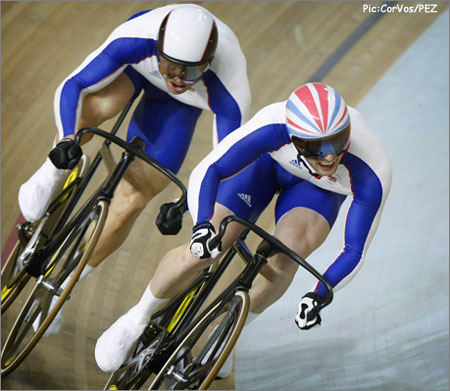 PEZ: What about Bos’s 200 record?
Chris: Definitely, I wasn’t far away at Beijing and when they ran the qualifying time trial, it was in the morning and the temperature was only 21 degrees. If it had been warmer, I think I would have got it. The record can be broken in Moscow – and it’s a lot easier to get to Moscow than it is La Paz.

PEZ: Sprinting seems less tactical these days.
Chris: The tactics are still there, but not as obvious. A lot of the sprints do look like drag races but you still have to manoeuvre so that you can ride to your strengths. One of the things that has changed, is that gears are higher and sprints start a lot earlier – maybe 500 metres out instead of 300.

PEZ: Did you notice the ‘tweaks’ to the GB “superbikes?”
Chris: Not really, they were all small things, but management told us they were beneficial and it helps with your confidence.

PEZ: Any sixes planned?
Chris: Milan, there’s a three day sprinters competition there, and Rotterdam where there are sprints every night. 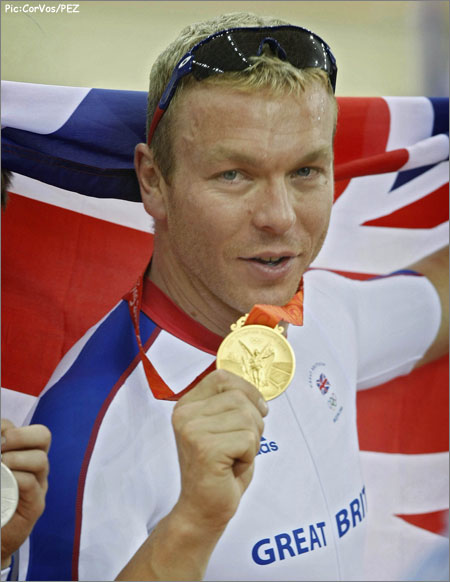 PEZ: Every kid in Scotland wants to be Chris Hoy, but there’s no indoor track.
Chris: One is to be built for the Commonwealth Games in Glasgow, but we need two – one on the West coast and one on the East. But Meadowbank velodrome in Edinburgh is being demolished. If you’re an elite athlete then you can jump in the car and drive from Edinburgh to Glasgow to train on the track. But it’s not about elite athletes, it’s about the kids. It stands to reason that if you have two tracks, then you double the chances of getting your next track stars. If there had been no Meadowbank, there would be no Chris Hoy!

PEZ: What now?
Chris: Right now, it’s more luncheons and functions – I have three days off in the next five weeks. I’m looking forward to just getting back on my bike. Race-wise I have the last World Cup in Copenhagen and I’ll definitely be at the track Worlds in Poland – although I don’t know how well I’ll be going.

PEZ: And the big goal is still London, in four years?
Chris: Definitely!

***
With congratulations and thanks to Chris – how much did you say that invoice was for, Max?!