‘The Tour of Qatar’ – pro bike racing in the desert; what’s that all about? We asked Cervelo Test Team’s Daniel Lloyd; who was fourth on GC and a member of the winning team – they put six in the first ten on the overall.

The new kids on the block also won a stage with Roger Hammond – who kept the GC jersey warm for Tom Boonen for one stage – and the Points and Young Rider classifications with Heinrich Haussler. The race was marred by tragedy however, with the untimely death – in his sleep – of 21 year-old Freddie Nolf from Team Top Sport Vlaanderen.

PEZ: Cervelo hit the ground running, Dan.
Dan: Yeah, the whole team was on a high coming out of the race, it was a dream start; we couldn’t have done much better. We had a good training camp in the Algarve for two weeks and even though the weather wasn’t brilliant there, it certainly set us up well. 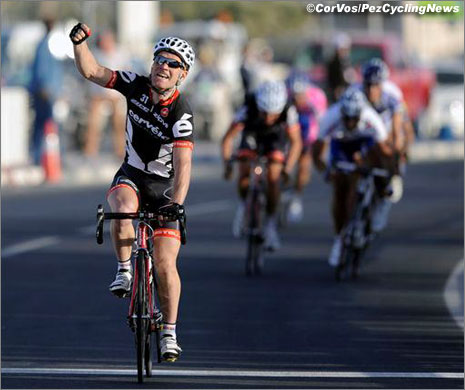 Hammond drew the lucky turn and soloed to the win in Stage 1.

PEZ: On the stage that Roger won, you Cervelos were attacking in turn.
Dan: We had six guys in the front group, but we weren’t going to beat Tom Boonen in a sprint so we had to go on the attack. It was fantastic feeling to see Roger’s arm go up for the win; I don’t often get big surges of adrenaline, but I did then! The sponsors are very happy and even Boonen was saying nice things about us; that we’d taken the race by the scruff of the neck.

PEZ: Roger is looking skinny.
Dan: Well, this is his time of year; he’s very motivated and happy with the team – he’s put in a good winter. 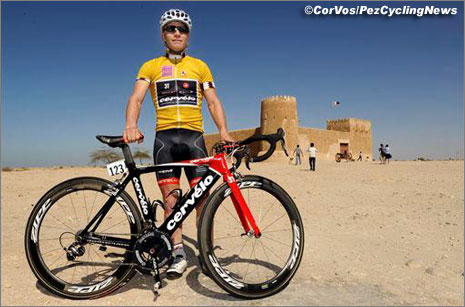 PEZ: How did Cav look?
Dan: He won two stages, so he’s obviously in good shape, but not top form. 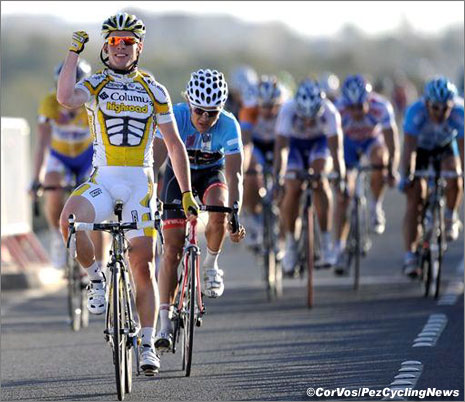 Two stages…not too bad for Cav.

PEZ: What about this wind we heard about?
Dan: It was unbelievable; into the wind we were doing 32 kph but there were spells with the tail wind where we were sitting at 64 kph. One of the stages had a 54 kph average and for the last hour it was 60 kph all the way. You had to concentrate very hard in the cross winds, if you lost the echelon then that was it, you were just spat out.

PEZ: Fans were a bit thin on the ground.
Dan: The powers that be in Qatar decided they wanted their own Tour de France, so they involved ASO and the race came to be. But despite the race being on the front page of the local papers, I’m not sure there’s that much interest among the locals. Doha is the only real city, so there isn’t really that much opportunity for place to place stages.

PEZ: The stages are a bit featureless, do the kilometres drag?
Dan: The scenery’s not fantastic but you’re always aware of the wind direction; you’ll see an intersection coming up, so you have to ready for that. Coming into the turns you have to fight for position and you have to make the echelons when they start or you’re out the back. Once you’re in an echelon, you’re concentrating so hard that the time zips past.

PEZ: With the stages being short, were any guys doing extra kilometres before or after?
Dan: I saw Cav behind the car after a stage one day and I saw Brad Wiggins doing a bit extra before a stage, but that was about it. 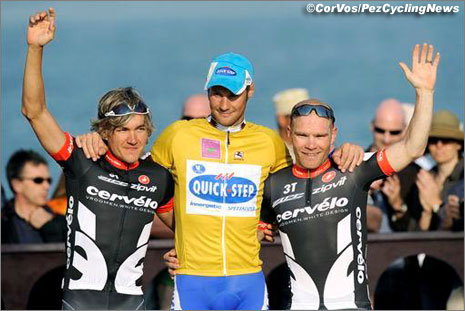 Cervelo put two on the final podium, but could not push Tommeke off the top step.

PEZ: Was Tommeke impressive?
Dan: Yes, he’s an incredible rider, at one point we had him isolated; there were eight of us there but we couldn’t take the leader’s jersey from him. I don’t think that the QuickStep team he had with him this year was perhaps as strong as it has been in the past but I’m sure they’ll all be on top form for the classics.

PEZ: How did you hear of the Freddie Nolf tragedy?
Dan: Some of the guys heard at breakfast, but I’d actually gone up to my room and was in my racing kit; Jez Hunt came in and told me. From outside the rooms you could see down into the reception area; you could just tell that something awful had happened.

PEZ: AN Post to Cervelo – quite a jump for you.
Dan: It is a huge level up, but I wouldn’t say a wrong word against AN Post, they took me on board at short notice last season. Kurt Bogaerts, is a good manager and he did a great job on the budget available – at that level you won’t get a better race programme. 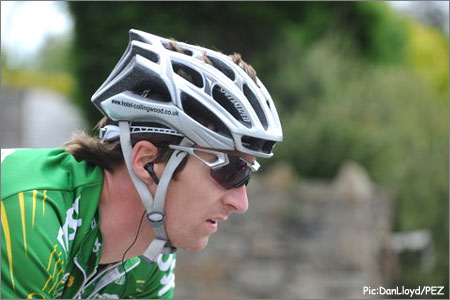 Lloyd is grateful for his time with AN Post.

Being with Cervelo gives you confidence though, because every angle is covered; back up, equipment, nutrition – everything. In Qatar we had two mechanics and three masseurs; that’s one of the big differences from a team like AN Post; here all of the staff are full time and there for you all the time, no one is part time. 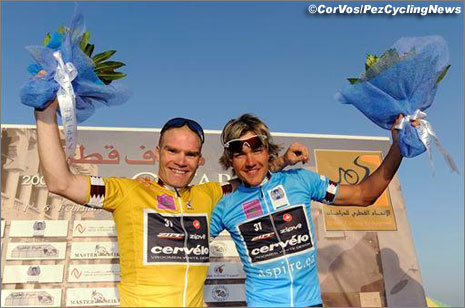 Stage 2 was a big day for Cervelo – the stage, overall, and young rider!

PEZ: How’s the new wheels; and are you testing anything?
Dan: Brilliant; it’s a fantastic bike – we’re on the S2 but will be riding different frames as the year goes on. I’ve got a special bike here at home which I’m testing, it’s pretty radical but I can’t tell you anything about it. Roger Hammond is testing new equipment too, for use in the cobbled classics. 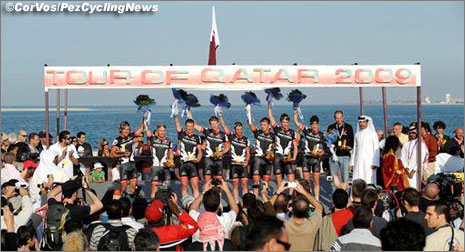 The Cervelo TestTeam was brilliant in Qatar – and took top team honors as a result.

PEZ: Are you enjoying being back in the UK with the rain, sleet, snow, cold, wind. .
Dan: I only ventured out to take my son to school today – It just hasn’t stopped raining! I have good form and don’t want to compromise it by catching a cold; but if it’s still raining tomorrow, I’ll have to wrap up warm and go out and do a couple of hours.

PEZ: What’s next for you?
Dan: I may be riding the Tour of the Algarve; but failing that I have two one day races in Switzerland at the end of the month – then I’ll be riding the northern European races, like Brabantse Pijl for example. I think I’m looked upon as a climber, but I like those races, particularly the constant fight for position. And I better go and ride up some hills – I haven’t seen any for a while! 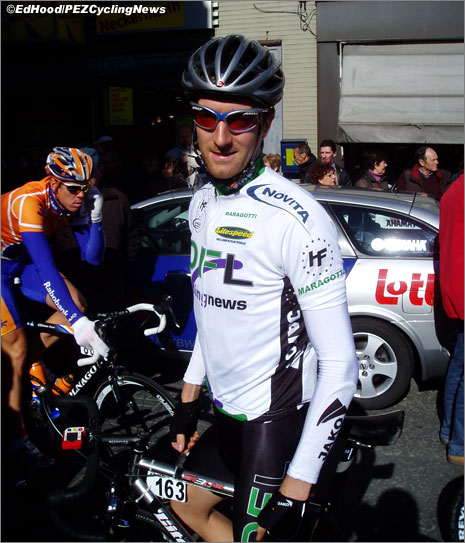 For a climbing type, Lloyd is not afraid of the cobbles – here he is before the start of De Panne a few years back.

PEZ: A good start to 2009, then?
Dan: One of the biggest things about success in cycling is what’s going on in your head – and our morale just couldn’t be any better!

I did press him for the low down on the ‘trick kit,’ but he explained that if he told me, then he’d have to shoot me! With thanks to Dan for his time; we’ll be talking to him again as the season progresses.