Heinrich Haussler – he’s one of the favorites for the Primavera. But even the most ornery of sprinters can’t make it into the record books as the winner of the 100th Milano-Sanremo without their pistolleros; the hard men who’ll keep them out of the wind, make sure they’re at the front for that right hander at the bottom of the Poggio then give it all for the head honcho as the red kite flashes overhead. Haussler has one of the best: Jez Hunt. 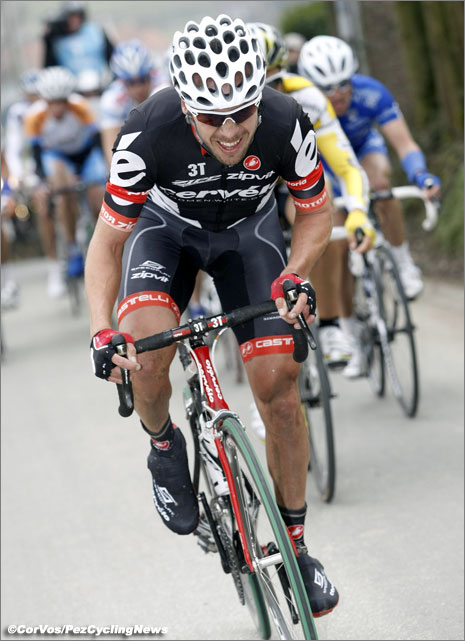 Despite all that cosmo stuff, he’s never lost his Devon accent, folks down there in South West England don’t get too upset by anything – and Jez is no exception.

We caught up with him after Paris – Nice; to talk to him about his excellent third place at Kuurne – and who’s gonna win the Primavera.

PEZ: How were the legs on the Sunday morning, after Het Nieuwsblad, the day before?
Jez: I had good legs; I missed the move on Saturday so I was able to hide in the bunch for the last 60 K of Het Volk. It’s not actually easy, but it’s a big peloton of 100 riders and you can position yourself so it’s not too bad.

PEZ: How important is massage between two races which are as hard as those?
Jez: Vital, that and stretching; we’re lucky at Cervelo because we have very good physios. 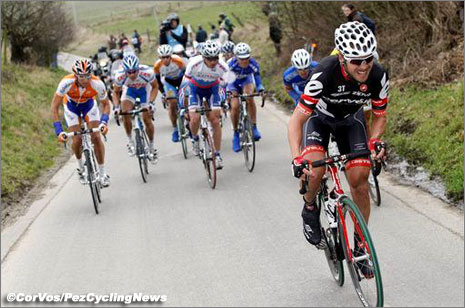 PEZ: What was the Cervelo game plan for Kuurne?
Jez: Cover the early breaks and make sure that we were well positioned for the three climbs that come in quick succession, starting with the Kruisberg, Oude Kwaremont and Cote de Trieu – miss the split there and it’s finished.

PEZ: Is there much difference in degree of difficulty between the two races?
Jez: I think that Kuurne used to be the harder race, but they added more stretches of cobbles to Het Volk and its tougher now – but at Kuurne, you have the 200 K from the day before in your legs.

PEZ: Tel us about your technique on the cobbles.
Jez: If you’re going good, you get over them; if you’re going shit, you don’t – there’s no technique, but the minute you lose momentum, it’s finished. 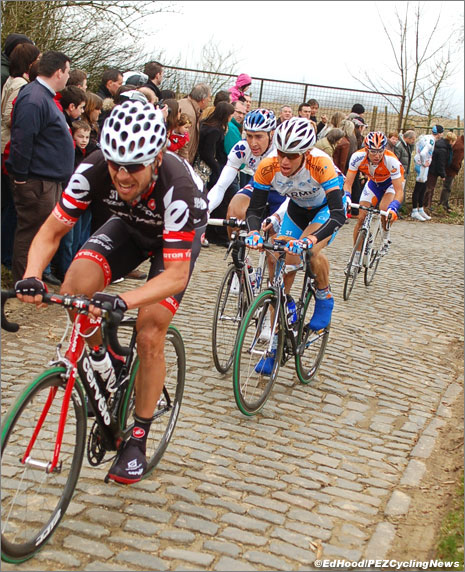 PEZ: The approach to the climbs can be hairy, I believe?
Jez: It’s worse than a bunch sprint, you have to be in the front row, if you’re there, you can set the tempo, if you’re 30th, it’s hard, if you’re 100th, forget it.

PEZ: Flecha’s tactics were a bit puzzling.
Jez: When you attack, sometimes no one reacts and you’re away, a lot of times it doesn’t, but you never know – he always tries to get away in the last four or five K. 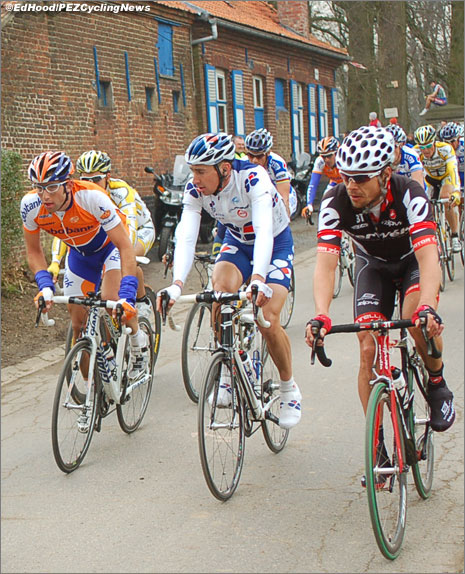 PEZ: Tell us about the sprint.
Jez: I was covering the moves for Heinrich Haussler but he was taken out the back and I was on my own. I was watching because I thought maybe I could get into a move, but it stayed together. I led out from 175 metres, you have to be careful not to go too early or you’ll die and ten guys will pass you in the last ten metres. As it was, only two passed me and one of them is the best in the world, so I can’t be unhappy. 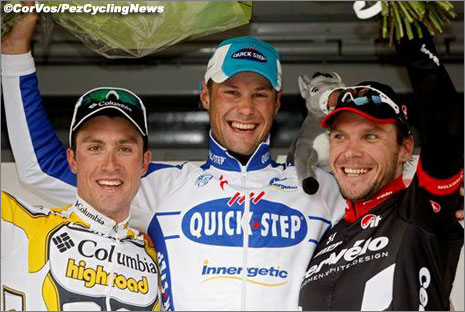 PEZ: How was Paris – Nice?
Jez: It was good for the team with Heinrich Haussler’s stage win and it was good for me; I’ve come out of it well, a bit tired yesterday but better today. Tomorrow we’ll do four or five hours, take in the Cipressa and Poggio with a couple of hours behind the motor bike after that. Then Thursday we travel to Milan. 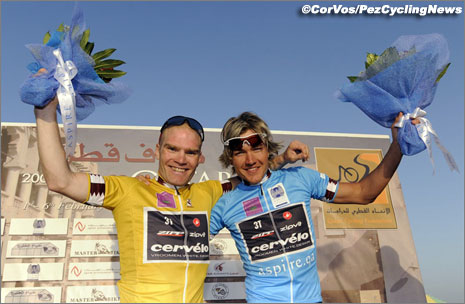 PEZ: Will we see you in the Primavera?
Jez: Yes!

PEZ: Who else is a favourite?
Jez: Thor Hushovd is going well. 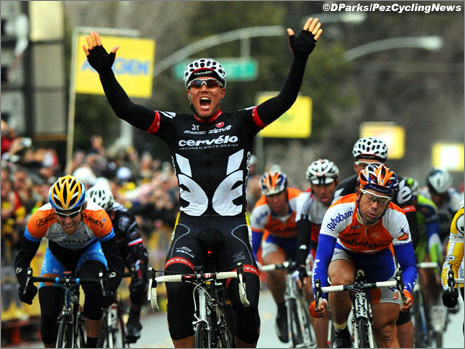 PEZ: Has he recovered from his crashes in Paris – Nice?
Jez: I’ve been training with him for the last couple of days – take it from me; he’s going just fine!

PEZ: Other favourites?
Jez: The usual ones; Petacchi, Boonen and Chavanel maybe, but I don’t know how he’ll fair in a sprint.

PEZ: And worst?
Jez: I’m not going to tell you! (No wonder he gets a contract every year!) 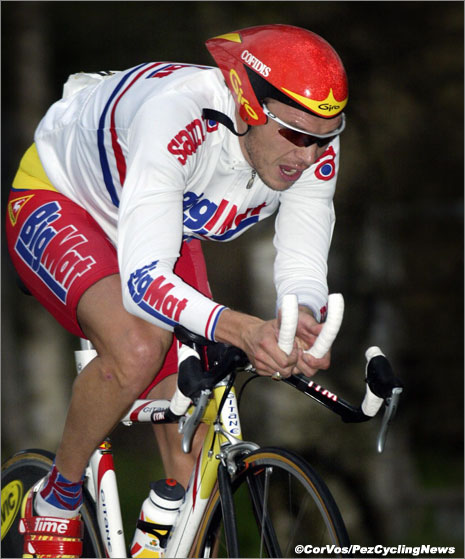 Jez has seen it all when it comes to bike racing.

PEZ: You’ve been on a few French teams; what do you say to the adage that the French don’t train hard enough?
Jez: At the training camps, I’d say they train harder than anyone, but I think it’s when they’re at home they don’t do the work.

It’s more of a mental thing anyway, most Belgian and Italian riders are motivated, they want to race; but with a lot of the French they’ll say; ‘I wish I wasn’t here, I wish I was there,’ or whatever – they don’t have the motivation.

PEZ: The win that means most to you?
Jez: Plouay. 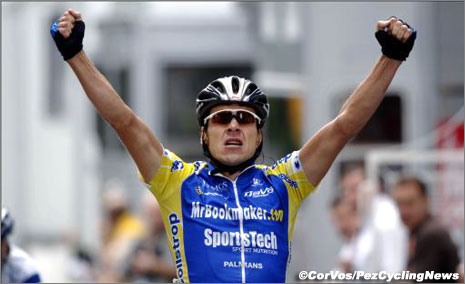 Mr. Hunt has won a fair many times over his career.

PEZ: I remember you getting round ‘Cipo’ a time or two.
Jez: Yeah, but that was ‘back in the day,’ he’s not racing any more – but I did it in the Tour of the Med, Aragon and Majorca too, if I remember correctly.

PEZ: Will this be the year you finally get your Tour ride?
Jez: We’ll see, it would be nice but there are a lot of good riders in this team.

PEZ: What about the new SKY team?
Jez: You never know, we’ll see, but I have a contract with Cervelo through 2010. 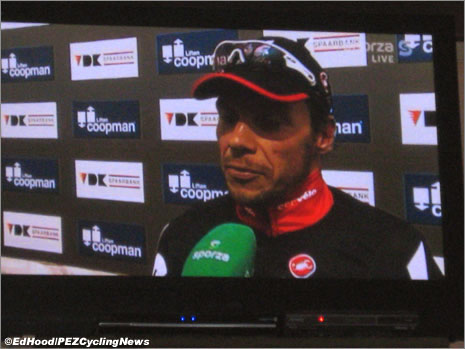 Jez interviewed after his podium finish at KBK.

PEZ: Are you beginning to think about life after racing?
Jez: I’ll be 35 this year, so yeah, but I think I have four or five years left in me; I’m still going well and I want to race.

***
Watch out for Jez in the human tide that pours off the Poggio on Saturday – Heinrich Haussler will be right behind him.