It was the last place I thought I’d see one of cycling’s historic heroes. Marooned on a small traffic island in a quiet part of a quiet town, a balding, portly, bearded and slightly confused looking man caught my eye.

I looked at him, and he looked through me, bemused. Spectacularly lacking in subtlety, I did a double-take, and I’m sure it was him. Charly Gaul, ‘The Angel of the Mountains’, stranded at a pedestrian crossing, taking great care to get safely across the road.

One day shy of his 73rd birthday, Charly Gaul’s spirit did what his body often looked like doing, by shunning gravity and all earthly limits for good. 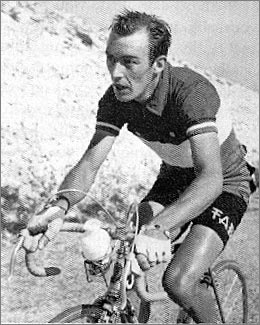 Charly Gaul was the “Angel of the Mountains” and one of the first ‘pure’
climbers. But even more impressive: the worse the weather, the better he
liked it.

He was a rider and a man who had fascinated me since I started reading about cycling’s history. This was the guy who smiled when he looked out of his window and saw hail and snow; the guy who took on the best of a generation and won – once at the Tour, twice at the Giro – as part of a Luxembourg national team that was weak compared with the might of France, Italy and Belgium.

And it was a generation of the best – Anquetil, Bobet, Altig, Geminiani, Bahamontes and Nencini.

His great talent was finally confirmed when Luxembourg combined with Holland at the 1958 Tour, giving him the team and platform to take the overall. He reached the mountains closer to the leaders than he’d normally be. Spinning obscenely low gears at leg-snapping pace, he treated both mountains and opponents mercilessly.

He thrived in an era when riders could turn around ridiculous deficits with one grand day out in the mountains. When he won the Tour in 1958, he started the stage to Aix-les-Bains well in arrears, but was confident enough to ride up to Louison Bobet to tell him exactly where and when the attack was coming.

Gaul and Bobet pretty much hated each other, and the aggressive, arrogant approach worked – when the acceleration came climbing the Luitel, Bobet crumbled. He crawled over the line nearly 20 minutes behind. The day’s yellow jersey, Raphael Geminiani was in tears even further back.

The 1956 triumph at the Giro was a forerunner of Andy Hampsten’s epic on the Gavia pass three decades later. With blizzards suffocating the Dolomites, Gaul started 15 minutes down overall, but ploughed through the snow to swing enough time around on the Monte Bondone to win the overall. He smashed the field as much as the weather – 57 guys abandoning in the snow.

The last time a rider demolished his rivals in really severe weather at a modern Tour was when Marco Pantani crucified Jan Ulrich in the freezing rain at Les Deux Alpes in 1998.

It’s no surprise that Gaul was a fan of Pantani, seeing a lot of himself, physically and emotionally in the Pirate; they had similar demons. He opened a bar after retiring in 1965, but quit his day-to-day existence within months and vanished. 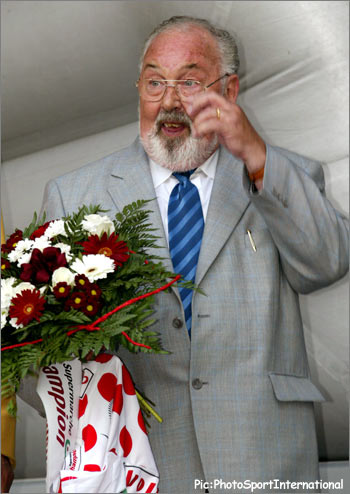 Charly Gaul, reportedly lived like a hermit in a Luxembourg forest after
he retired, but later came back to the sport he loved… albeit as a much
different looking man. In this photo from2002, Gaul gets emotional moments
after Lance Armstrong presents him his KOM jersey.

He spent most of the next twenty years as a recluse in the Ardennes, living in a forest with no electricity and no running water. He’d been through two marriages, a career of great highs and despondent lows and it looked like ‘Der Engel der Berge’ had permanently rejected the modern world.

In 1983, he emerged, showing up at the Tour, and married again. He gradually returned to what our sometimes twisted world regards as a normal existence, appearing at the Giro and other races. But his blue eyes always hinted he did so strictly on his own terms

Charly Gaul would have been 73 on December 8th. The next time the road ahead tilts heavenwards, send a few thoughts in Charly’s direction.