– Faster Than A Speeding Bullet – World Champion, Olympic Champion, World Hour Record Holder, Tour de France stage winner and six days in the Maillot Jaune, who could ask for a better career? I had the wonderful opportunity to speak to one of the greatest British riders of all time, the superfast Chris Boardman, actually Chris Boardman MBE (Member British Empire). 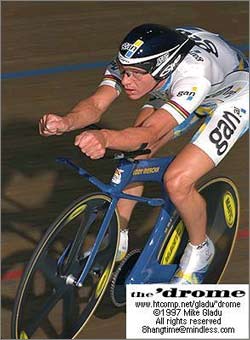 One sight I will always remember is that horrible crash at the Tour de France in 1995. Trying to repeat his 1994 Tour de France Prologue victory and first time in the Yellow Jersey, Chris pushed himself to speeds of over 50 MPH/80 KMH. The winding 7.3 KM course was soaked with rain, slippery and very windy. That did not stop the natural speed demon, and then it happened – the crash. A fractured left ankle and right arm ended that year’s Tour before it even started.

Chris wore the Maillot Jaune on 6 occasions at the Tour, the last time in 1998 when Chris was forced to drop out while wearing the Yellow jersey after another horrible crash. The Tour has always played a major part of his Career with 3 Prologue wins including the fastest one ever recorded.

If I was asked how to describe Chris in one word, it would be “Fast”, because most of his victories have come alone against the clock. His major victories include 1992 Olympic Pursuit Champ, World Pursuit Champ in 1994 & 1996, World TT Champ in 94, 3 Tour Prologue Victories, Grand Prix des Nations Champ in 96 along with a victory at the GP Eddy Merckx and then those 2 World Hour Records (the first in ‘96 and the second on a stock track bike in 2000). 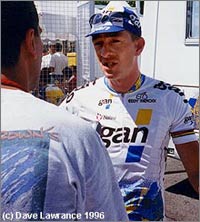 Rob: As a World Champion, Olympic Champion, World Hour Record Holder, Tour de France Stage winner and Yellow jersey wearer, did you ever think when you started you would be so successful?

Chris: For many years I paid only fleeting attention to where I would ultimately get to, and concentrated on continuing my progression, trying to leave no stone unturned in order to wring every last drop out of my body. This process took nearly 18 years from start to finish.

Rob: You have had some highs and lows at the Tour de France. The fastest ever prologue at 55.182 Kph and then crash in 1995 where you fell and broke your left ankle and right arm. Add that to 3 stage wins and then being forced out in 1998 while in the Maillot Jaune. How do you remember the Tour?

Chris: The Tour is the ultimate sporting challenge bar none. It is the only sporting event that requires the competitor to have a hair cut in the middle! As such, some of my very best and worst moments where realized during The Tour. It is the only race I ever road that meant something just to finish it.

Rob: You rode using Mavic Zap components even after they were recalled, do you still use them on your bikes and will you switch over to the new electronic gears from Campagnolo when they come out?

Chris: These days, it doesn’t matter to me what I use as I seldom ride a bike! I liked the electronic gears with which I only experienced two faults in 8 years. The problem with them, is that they either worked….or they didn’t. They also required the pedals to be turning to change gear so at the bottom of a steep, narrow climb in a Belgium classic, where everyone has ground to a halt on 53X12 and now needs to be in 39X23, they were very slow and a real problem. They were at their best for time trials. 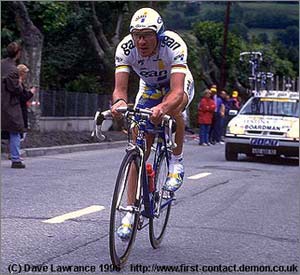 Rob: What are you doing these days?

Chris: A lot, I am technical advisor to the British Cycling team, I mainly advise coaches and support staff rather then riders I am currently setting up and educating an Irish National Track Cycling team, that project is due to last another 2 months and is great. I write regular articles for Procycling magazine, a job I accepted because it meant I could visit my former colleagues from time to time. I also write regularly for DIVER magazine, reviewing diver training courses. This is my primary passion these days. I have advised the British Triathlon team, although I haven’t been able to fit that in this year. I do occasional commentary work for Eurosport and the BBC which is fun. As for the rest, I undertake 20 charity appearances a year and up to 20 other projects of various nature as and when they crop up.

Rob: What is the best memory you have of your racing days?

Chris: Winning my Olympic Gold was obviously special as it opened the door for me and everyone on the planet can relate to that. Setting the World Hour Record in 96 which remains the best physical peak I ever managed to create as an athlete. Winning stage one of the TDF in Dublin, which came as a complete
surprise as I didn’t think I had the form. And of course, the final hour record, which was a great way to be able to finish and as it was by just 2 tenths of a second, it was also the most painful.

Rob: What is your worst memory of racing?

Chris: Stage 16 (I think) of the 96 Tour when I couldn’t stay with the peleton after just 5km with 260km and 7 mountain passes to go, it was the worst 8:30H of my sporting life, but I still managed to get inside the time limit.

Chris: None. We all make mistakes, myself included, but that is part of life.

Rob: What is your favorite bike you have ever ridden?

Chris: Terry Dolan’s as he built what I asked for as apposed to others who built their interpretation of what they thought I needed

Rob: As one of the United Kingdom‚s greatest riders of all time, who do you see as the next great British rider?

Chris: There are a few with potential, but at the moment, they are lacking a little
direction and focus.

Rob: Was there ever a rider you feared when they were on form or
at the front of the peleton?

Chris: I never ‘feared’ anyone, I never set out to be the best, only to be as good as I could be. If you take this attitude, you realize that no one else can effect what you do.

Rob: What do you think should be done about the current drug situation in pro racing?

Chris: Life bans is the only way, if you can’t detect the drugs; the risk has to be made greater than the potential reward. I don’t envy the UCI in this quest.

Rob: Do you think anyone will ever be able to beat your incredible world hour record of 56.375 km. You beat Moser, Merckx, Indurain and Rominger, that must be an incredible feeling?

Chris: Of course, records will always be broken, that is what they are for. Bradley McGee is already bearing down on my World pursuit record and without the equipment and position I enjoyed.