We got lucky enough to catch up to Saturn’s Chris Horner while in Carolina fresh off a shocker at the Carolina Crit, and semi fresh off taking the GC victory at the first Tour De Georgia.

PCN: So with Georgia in the bag and looking at the last couple of years, you do the damage early on. Does it just work out that way, or is it always the plan.

Chris: Yeah, most people call it early season, but if you look at the US calendar, this is the time you do your damage and earn a contract. Redlands, Solano, Otter and now Georgia, they are all pretty early on. With SF, NY and maybe Philly, those are big races, but to try and peak for a one shot race like SF means risking too much. I don’t want to waste the time I have to be away from my family risking it on one race, and the season just works out that way. 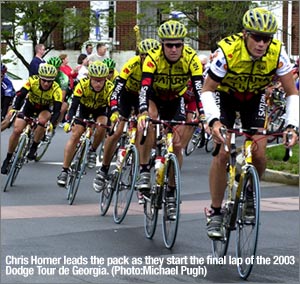 PCN: How do you keep it together on the road with kids and such?

Chris: Well it’s not easy being out 180 to 200 days a year. Not at all. Their mother takes care and gets things done, and there’s no way to do this job and earn a living without being on the road. The sacrifices are not just in the training time away… But that is a great form of motivation. I mean, if I am gonna be away from my family, I better be good at my job!

PCN: What moved you to Bend Oregon?

Chris: I really like the seasons there and it’s got clean air and plenty of road, but more than anything, it’s affordable. That and it’s so much less crowded than Southern California.

PCN: This year Saturn looks, er well, is dominant so far. What are 3 things that have made the difference this year.

Chris: The team is gelling really well. We’ve only had one case where everyone wasn’t doing there job this year exactly like they were supposed to. The leaders are delivering and the guys with support rolls for that race have been almost perfect. A couple of years ago this team had basically Trent [Klasna] and last year they had lots of people that were trying to step up but not all of the one’s stepping up had the legs at the right time to do it. I think this year there is a crew of people that can get the job done and I think everyone is comfortable believing that if they do their job, the leaders for the race can deliver.

Adding O’Niell’, Danielson and Dionne, I think made us stronger as well (cm “No Shit!”).

Another thing here is the support staff. Everyone gets the job done and it makes things a lot easier when a team runs this well. 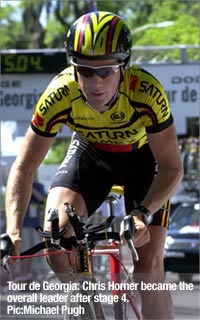 PCN: If you could pick 3 guys from any domestic team to bring to Saturn, who would it be and why?

Chris: Fraser [Gord] for sure. He is so consistent, you know he’s gonna have his arms in the air a dozen or more times a year.

Henk Vogels, because he’s just a hard, hard man. If he has to support you he can flat out produce, and if he’s in his element, he will win a few too. But mostly he’s just hard.

For purely selfish reasons I would also like Mike Sayers. The guy’s just the ultimate guy to have supporting you…

I have to add though, that this is if I had to choose guys not already on my team. This team is amazing right now, and we have guys to do the job’s that I just mentioned and be great at it! The talent here is Huge!

PCN: Watching three Saturn guys run away from the field doesn’t happen too often, did you have any thoughts of sending flowers to Vaughters?

Chris: Laughing, well it might not happen again for a while. It was just a strange deal with Jonathan pulling and Clinger not to far off on GC, we had to be there. Jonathan pulled so hard that it created a gap and it just got immediately clear that we should go, because nobody was in a position to chase with the right amount of force. Jonathan, Clinger and Pate will get better this year, no doubt, but the only guy that stood a chance of chasing was Pate, and he couldn’t do it alone. 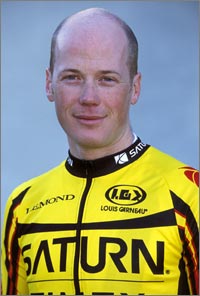 Chris: Not like that it doesn’t. You might not see that again for a while, or ever… Right now there are just so many teams that the power is spread really thin. Too thin actually. It makes for a real advantage when the strong guys are all on different teams.

PCN: Do you like being the 800 pound gorilla of cycling or does it take any fun out of it?

Chris: Out of winning (said with a “are you nuts” tone…)? No this is a great place to be. That said, last night we both got it from Erik [Saunders]! (Erik Saunders won the Carolina Crit from both Saturn and Navigators by launching a great flyer with a few laps to go and holding it for the win). I love it when guys lay it all on the line like that. If you are gonna lose, you like to see someone just lay it all on the line and beat everyone.

PCN: We all know you won, but of more concern to me was the quality of the race. How was the Tour De Georgia as far as organization and quality goes and what could it use?

Chris: As far as organization and professionalism, absolutely nothing! That race was every bit as good as it gets in the US. It stands toe to toe with Dupont or any other race. They really did well. As for what it could use… Just more stages. I would love to see it get bigger and become more important for points. It was all top notch.

PCN: What do you think the race scene in the US could use to prop up the sport?

Chris: More Phillie’s, more San Francisco’s. Just a more professionally produced product. I have nothing against other category riders, not at all!, we all started somewhere, and the next big thing is probably a cat 5 or junior right now. But for the sport to get the attention and hold it, we need more races where it is simply a professional event. Just the pro’s. We have a beautiful, marketable sport with great personalities, cool equipment, the whole thing. But to get bigger we need to have people see a completely professional sport, and it means having separate events where you get all the flash. You don’t get that with guys changing in parking lots, or worse… or mix and match team gear and clothes… Like I said, I totally support racing at all levels, but we need more pro only events that stand up to a high profile. 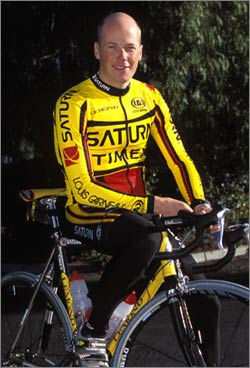 PCN: What will the rest of your year be like?

Chris: Hopefully holding some form for Philly. Maybe being there for San Francisco, but you have to be top flight there because there is nowhere to hide on that course. Then I would like to ride worlds, If nothing else, Just for the experience you get being among that kind of competition.

PCN: Last but not least, the most important thing is, How do you like the new bike?! (Lemond’s new Tete de Course)

Chris: It’s super! They realy did a good job with these. I like the ride, and it goes when you push it… And they look so good. They will have a hard time coming up with a better paint job than the team issue. It really is a hot ride.

NOTE: I broke it off after talking for another 20 minutes and immediately started thinking about how to try and steal one of the new Lemond’s (Dionne and O’Niell are my size and should not leave their bikes unattended!) But I was also left with the feeling that I just talked to a Pro, simple as that.

I don’t have enough room to write down an hour long conversation, but if I did, you’d have liked the read and come to the conclusion that Chris is a guy who not only understands what he does for a living, but also knows what is going on around him and has an appreciation for team mates, competitors and the people that we don’t see on the camera.

Best of luck to Chris and Team Saturn (or better yet, best of luck trying to everyone else!). You can check em out at www. SaturnCycling.com.