After the official launch ceremonies were complete, Horner talked with PEZ about his new roll leading the young team, and we picked up the reverse side as young guns Tim Aiken, Griffin Easter and Luis Lemus explained how things on the team are different a bona fide Grand Tour winner as their leader.

Can you catch lightening in the bottle twice? If you are Chris Horner you definitely think so. In 2004, Horner turned the small, domestic pro team, Webcor Builders, into the most successful squad in the American peloton. Fast forward 11 years and the stars seem to be aligning yet again with his new squad, the Airgas/Safeway Cycling Team.

Horner looks back fondly to that 2004 season. “Webcor was the most fun year I had racing my bike. It was stress-free. It was just a bunch of guys going out having a good time and we won everything and everyone on that team won. It felt like when you went home you came from a vacation.” 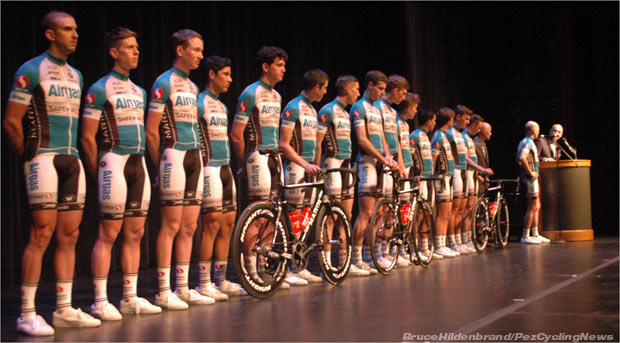 And he sees that same scenario with his Airgas/Safeway teammates. “As soon as I walked into the room I thought this is exactly what I was hoping for. We are going to have a good time. We are going to do some of the biggest races in North America and it is going to go down as a year of just good memories, good friendships and just enjoying bike racing again.”

Certainly, Horner has proven that he can win races. But with a team that’s third oldest rider is only 23, it is Chris’s experience and his ability to mentor the young riders that will be the key to the overall success of the team. “When I won Tour of California I had [Matthew] Busche there. We were rooming together. Busche is all motivated. He’s psyched up. He’s like ‘man, I want to make guys hurt here.’ My response was ‘Save it. We have a couple more days until this thing starts then we have a couple more stages and then we will let you loose. But, right now, just keep that stuff bottled up. Keep that energy.’

We get to the day on Sierra [Road] where I won and we are going up [Mount] Hamilton, the climb before Sierra, and he just wants to get to the front and destroy everybody. He’s been chomping at the bit for five or six days. He wants to light up the whole field. I am telling him ‘Not yet. Not yet. We have a couple of other guys who can do that right now.’ We hit Sierra and he just lit it up and destroyed everybody. He was amazing. So it was really be fun to be part of that and see that energy and see that excitement and have a helping hand in letting him show the world what he can do,” said Horner. 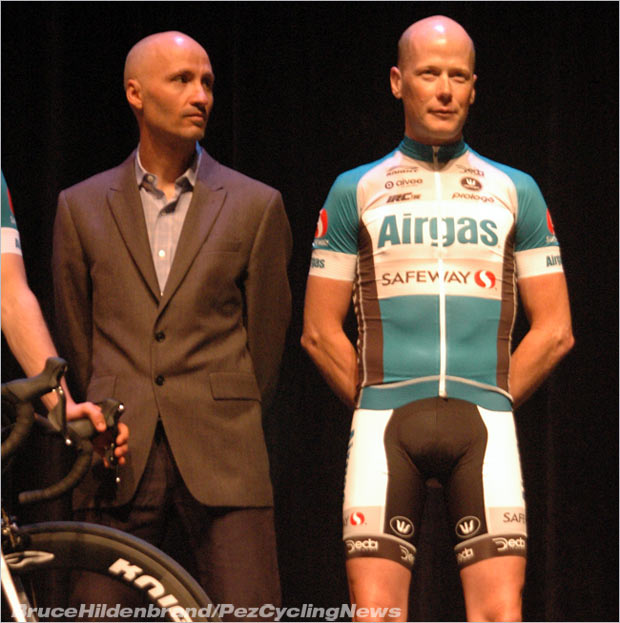 Can the same thing happen with the Airgas/Safeway Cycling Team? “I see that already in the training camp we have been having. There are five or six really strong guys and we are only here in February. I expect the same thing [as with Webcor]. I expect the guys to step it up. Go to the next level. That’s what they want to do. They want to go to the next level as professional riders and go to Europe and do the Tour. Now is the time,” said Horner.

And there is a lot to learn. “When you go from the amateur level to the professional level, as a bike rider, all you know is how to turn circles. Maybe you can go downhill fast because you are young and dumb. Then you crash a few times and slow down. But, what really everyone needs to learn is when do you use the power. When do you save it. Where to use it.

Team Director Bart Bowen, who won two US Professional Road Race Championships as a rider offers his perspective of the Horner signing. “We are not racing for scraps anymore. We have a legitimate contender and, really, a couple of guys who are legitimate contenders. When you have that it changes your whole mentality. You can go out and race for a purpose and not just to see how I can do or you can do.”

“What’s cool about Chris is that he loves to race his bike. And the reason he loves to ride his bike is because he is good at it. He’s not just going out there watching his watts. He’s a good racer. He has a good head on his shoulder. He’s won crits. He’s won the Vuelta. That’s a pretty vast range,” adds Bowen. 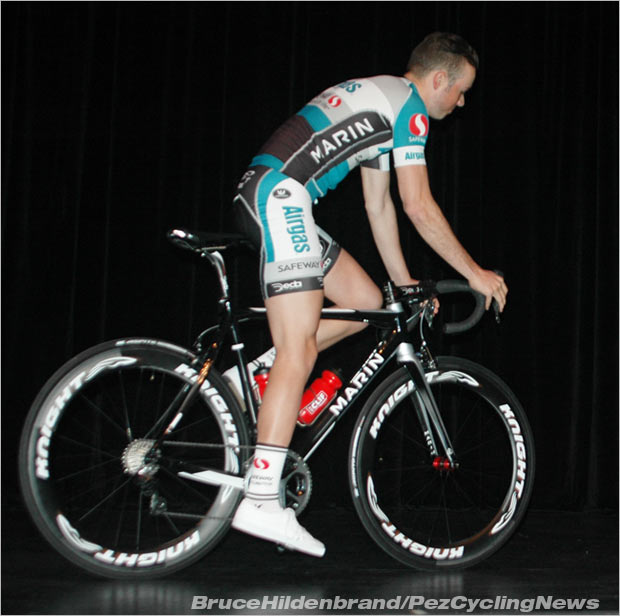 Tim Aiken rolls onto the stage.

Tim Aiken is a sophomore at Stanford University majoring in Computer Science. “It’s a hard balance. It’s like two full-time jobs. I love school and I love cycling. I wouldn’t give up either one. It gets tough at times, but both are really rewarding and it helps fill out my life. Not many people are doing what I am doing maybe that just means I am a little bit crazy. But they are both amazing opportunities and I have to take both of them.”

Aiken, who will turn 20 this year, is ready for the challenge of having a grand tour winner as his team leader. “Racing with Horner… it is sort of a requirement that you raise your game. That was a huge, surreal moment when I heard he was going to be on the team because I knew the opportunities that would open up and I knew how much we could learn from him. He’s been a professional longer than I have been alive. He has had so much experience and he can teach us so much.

He is renowned as the one of the smartest tacticians in the pro peloton. So, just teaching us the ins and outs of how to read a bike race and what to do when is valuable. Also, the responsibility of racing for someone, like Horner, makes you learn how to be a good worker. How to be a good domestique,” adds Aiken. 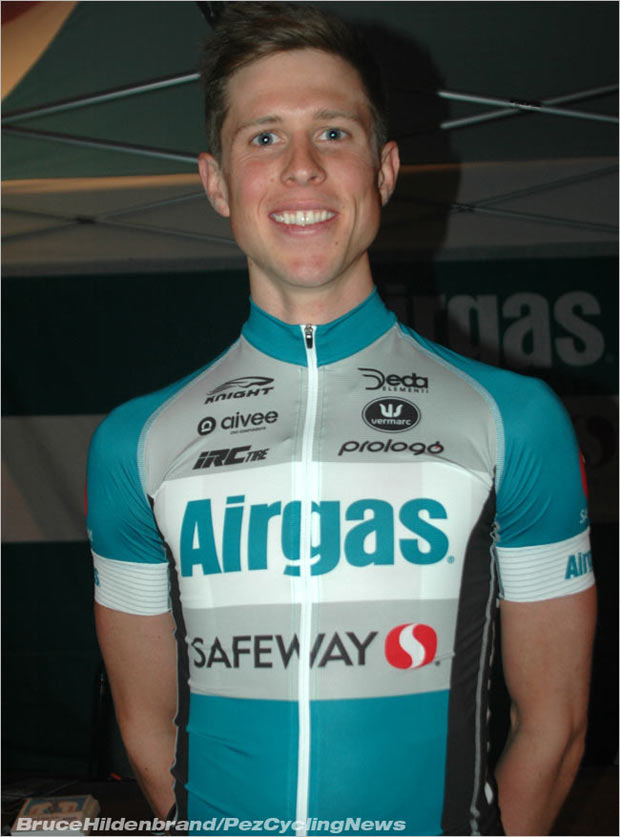 Griffin Easter, finished one place ahead of Aiken at last years Collegiate Nationals while winning the Road Race is one of the few returning members of the team. What different between 2014 and 2015? “There’s definitely more organization and with Horner being on the team there is a whole, new atmosphere and energy to everything. There is a feeling that you want to give as much of yourself as possible.

I think it will be really cool having him inside the peloton when we are racing. Having him right next to you to tell you ‘don’t do that. You need to do this.’ Or ‘go back to the car now.’ Or that there is a crosswind coming up. Just stuff like that is going to be a game changer,” adds Easter. 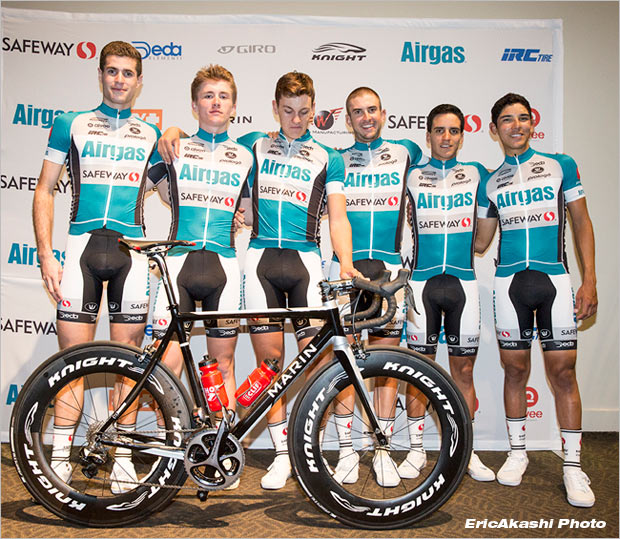 Luis Lemus is a two-time Mexican National Road Race Champion. “Even though I am still young at 22, I have some experience racing in the biggest races in North America. I do have some responsibility, but I don’t really feel any pressure. We are all looking forward to racing as a team so that takes a lot of pressure off of me,” said Lemus.

Like Aiken and Easter he is looking forward to riding alongside Horner. “He’s a really relaxed guy who gets along well with the guys on the team which makes it very easy to pass along his experience. Also, though I am young, at 22, I have been racing in North America for three years so I can act as a bridge to help Chris get his knowledge to my generation. I know how the guys think. The doubts that they have right now because that was where I was a couple of years ago,” said Lemus.

The Airgas/Safeway Cycling Team has fifteen riders, but at the start of the 2015 season, cycling fans are familiar with only one of them. Under Chris Horner’s tutelage, hopefully, by the season’s close that won’t be the case. It’s happened once before, and all signs point to history repeating itself again.

Fifth Gold Medal For In Two Weeks For Moolman-Pasio

Tour de Pologne – Emotions and Behind the Scenes