You’re the Olympic kilometre champion, but the ‘powers that be’ decide to remove the event from the programme at the next Olympics – what do you do? If you’re Chris Hoy of Scotland, you go out and transform yourself into the best keirin rider in the world!

PEZ: We’ve heard a lot about the kilometre being axed from the Olympics, but why did they do it, Chris?
Chris: The bottom line is the number of events in the Olympic programme, there are so many events that if one is added then one has to go. In this case BMX was added, so the kilometre and 500 metres for the women were removed. China supplies 90% of the world’s BMX bikes, so they were happy with the change, plus it’s a ‘youth’ sport – which they like to have in the Games. 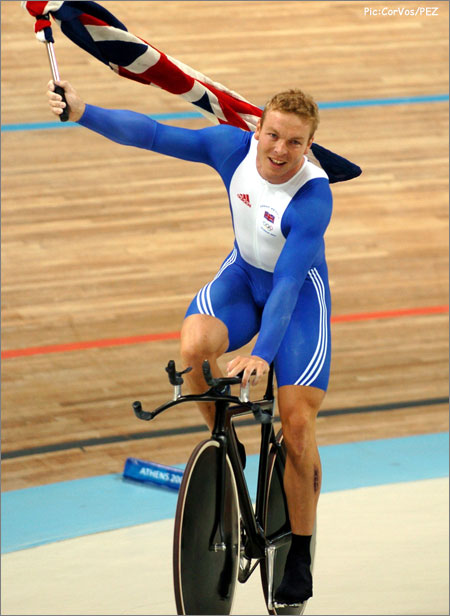 PEZ: I’ve seen different figures, how many keirins have you actually won, ‘on the trot?’
Chris: In international competition, it’s 19 in a row; I lost one at the national championships, though.

With the team sprint and kilometre you have to be able to switch ‘on’ and ‘off’ between rides, at a World Cup, if you get to the finals of both events, you’ll be up on the track eleven times and racing throughout the whole programme of events.

Your focus has to be tempered, so you don’t burn yourself out. 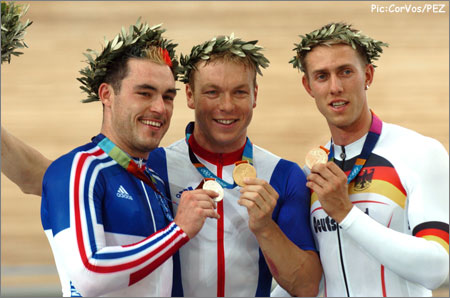 PEZ: Who are the ‘danger men?’
Chris: There’s no one in particular, there are so many good guys that it’s pointless to focus on one of them. In the sprint at the Beijing World Cup, I qualified fifth, but I was only 6/100 of a second behind the fastest guy – that’s how competitive it is. What you actually do is to look for other guy’s weaknesses, so maybe you can exploit them in the future.

PEZ: Who’s ‘dangerous’ in the literal sense of the word?
Chris: Anyone getting too physical will very quickly be pulled-up by the commissars; it’s a lot safer at Worlds level than it used to be. It’s at national championship level that you have to be careful, young riders coming in with the perception that it’s a ‘rough and tumble’ event.

At the highest level it’s more about sustained speed, the dangerous bits tend to happen at lower speed, if you’re riding at 10.5 tempo, you don’t have much scope to move around!

PEZ: Do you have a tactical mentor or adviser?
Chris: I have Jan van Eijden and Ian Dyer; Jan was world sprint champion in 2000, so has ‘hands-on’ experience; whilst Ian doesn’t have a cycling background, but he’s very insightful and analytical, he’ll see things that other people would miss. 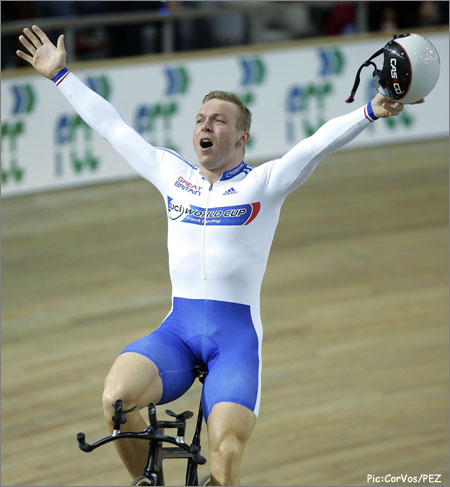 PEZ: Give us some keirin ‘secrets.’
Chris: Speed is essential; you have to train like a sprinter. You have to have a game plan when you get-up to ride, but you have to be flexible, able to adapt if something happens that you’re not expecting. You have dictate, rather than waiting on the others, you have to get your move in first; nowadays the ‘waiting game’ is risky.

The event has changed a lot, with the kilo coming out of the Olympics it means that the kilo specialists are looking for another event, so the speed goes on from further out.

The sprinters are a bit miffed, especially those guys who relied on a late jump. 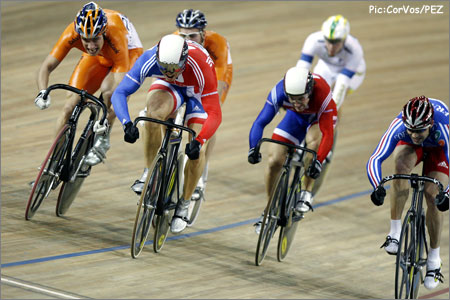 Moments away from winning the World Championships in Mallorca in the Keirin.

PEZ: The team sprint; there’s a lot of competition to make the GB team now.
Chris: There’s no animosity among the riders, but it’s very competitive and every place has to be earned, you can’t take anything for granted; but it has to be like that if you want to field the team that can win the Olympics.

PEZ: The Netherlands has appeared as a track force.
Chris: I think that’s down to them having a few talented individuals who they make the most of, rather than strength in depth; also a lot of their medals come from the ladies side, which maybe isn’t quite so competitive.

As far as the team sprint goes, France are the team to beat; world champions and world record holders – a tough nut to crack. 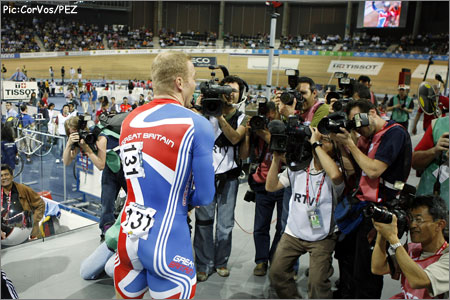 PEZ: Word is that the GB ‘stealth’ bikes are set to be even more special for Beijing?
Chris: I think so, we’re kept out of the loop; the riders who test them have to sign confidentiality agreements. It’s not just bikes, we’ll have new helmets and skinsuits; all designed to give better aerodynamics. We haven’t seen them yet, but I should think we’ll be using them at the Worlds in March.

PEZ: Final question, the London Olympics 2012 – do you hope to be there?
Chris: Yes! I’ll be 36, so it’s not that old, as long as I’m still enjoying it and still improving – you never know, they might even bring the kilo back for then!

With thanks to Chris for taking time out of his busy schedule to talk to us, and wishing him all the best for Manchester and Beijing in 2008.