Retro Rider Interview: As the season moves to Belgium for the Spring Classics and the ‘proper’ racing gets under way, Ed Hood talks the hard-man of Herentals – Geert Omloop. Class on a bike isn’t easy to describe, but take a look at Geert Omloop and you’ll get a good idea. 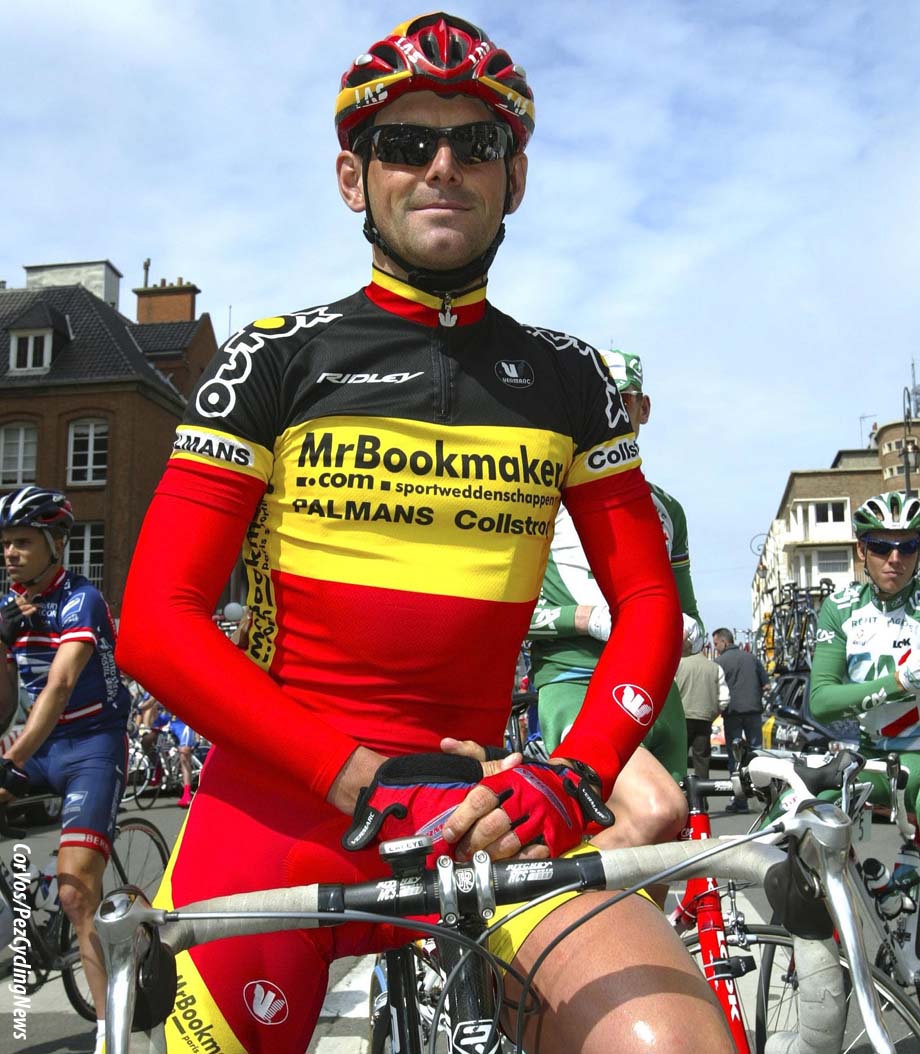 ‘Coolness’ is hard to define, most professional riders are smart, well turned out but only a few are ‘cool.’ Belgian Geert Omloop was one such rider but not only was he cool, he was hard as nails, a master of the art of the kermis and on his day capable of beating Belgium’s very best to win the National Elite Road Race Championships. 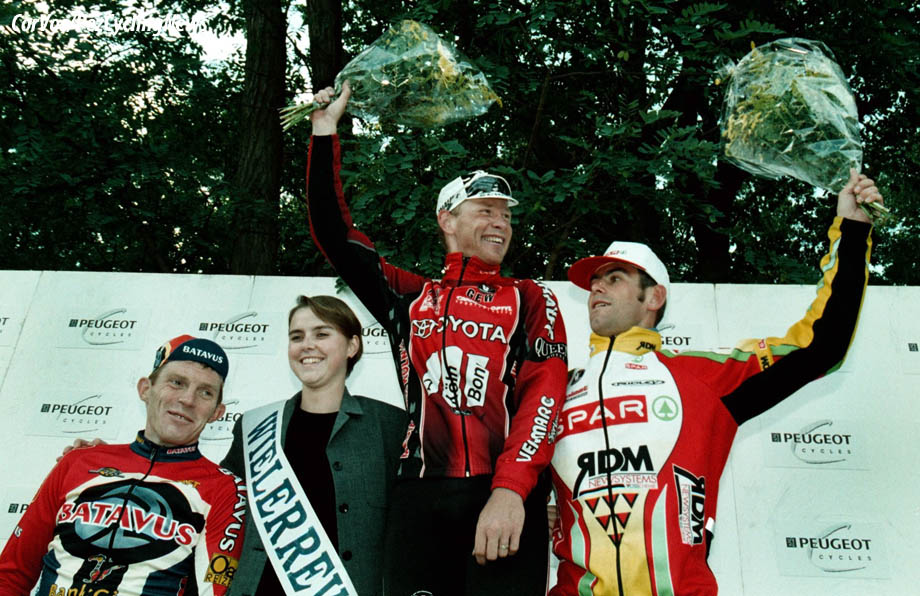 He first turned pro in 1997 for small German team EC Bayer and demonstrated his potential in the Belgian season-ending Putte-Kapellen race where he finished second. For ’98 he was with Belgian squad Spar RDM and won the GP Melckenbeeck remaining with the team for ’99 and winning the tough Omloop van het Waasland as well as netting a heap of podium places. 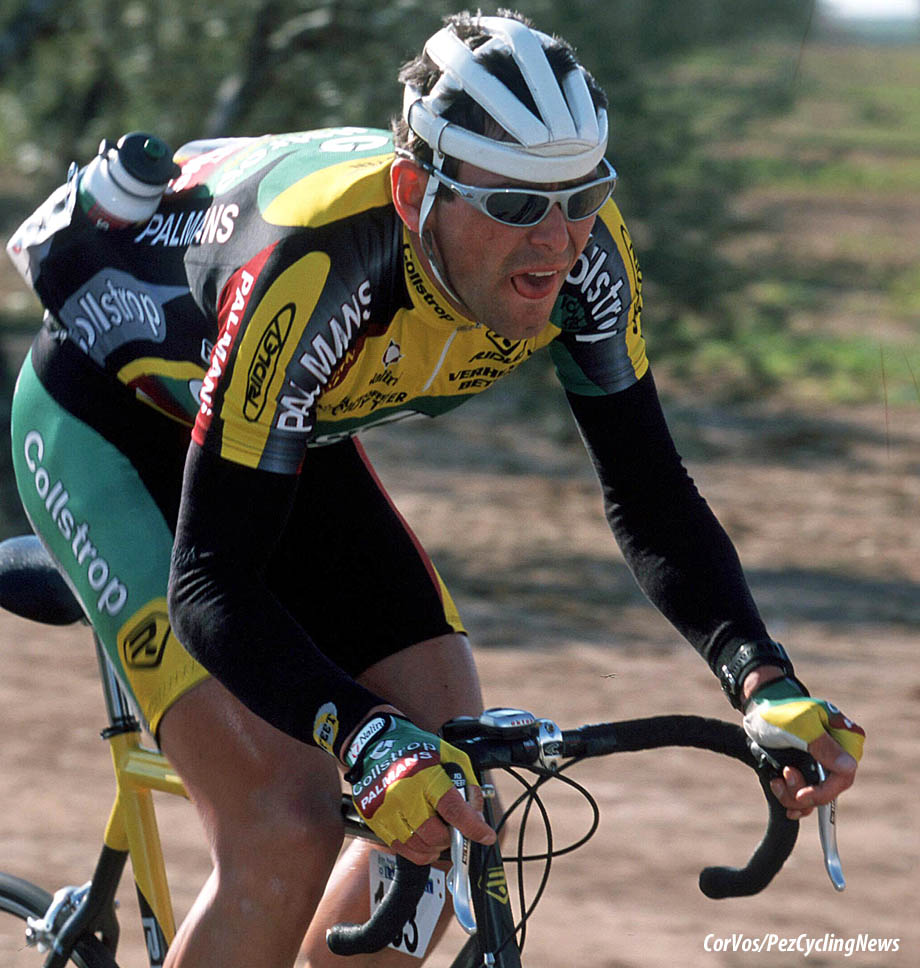 Season 2000 saw him with Collstrop, winning in Houtem and piling up the podiums again. He remained with the team in 2001 winning the prestigious GP Dhaenens and the Mei Prijs. The name on the jersey changed to Palmans-Collstrop for 2002 but the wins kept coming, notably the Memorial Fred de Bruyne and Putte-Kapellen. Still with Palmans for 2003 he had his best season, winning the National Championships and the Waasland again as well as numerous other kermises. 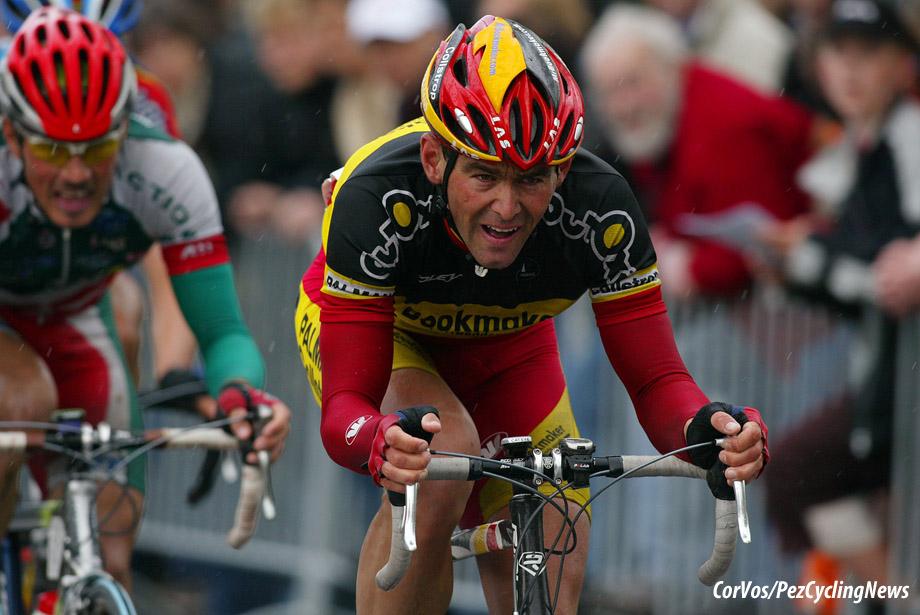 Mr. Bookmaker it said on the jersey for 2004 and only super-fast Tom Steels could deny him his champion’s jersey defence but there were wins in the Dhaenens, again and in the GP Frans Melckenbeeck. He stayed with Mr. Bookmaker in 2005 winning in Meulebke but 2006 was less successful as his Unibet team struggled as a pawn in the ASO v. UCI power struggle – despite that he won in Heusden. 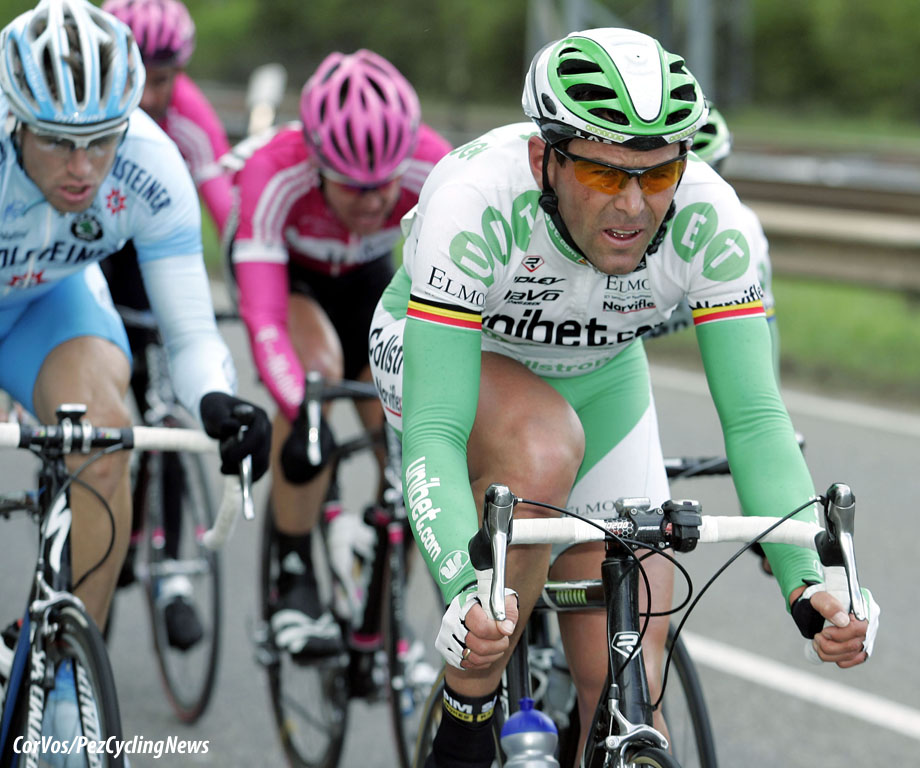 There were no negs in 2007 with Jartazi just a clutch of good wins including the GP Marcel Kint. He was with Mitsubishi in 2008 and won the Heiste Pijl. Back with Palmans for his last two seasons he win the highly desirable Ronde van het Groene Hart in the Netherlands in 2009 and the GP Raf Jonckhere in his final year, 2010. Geert took time to chat to PEZ. 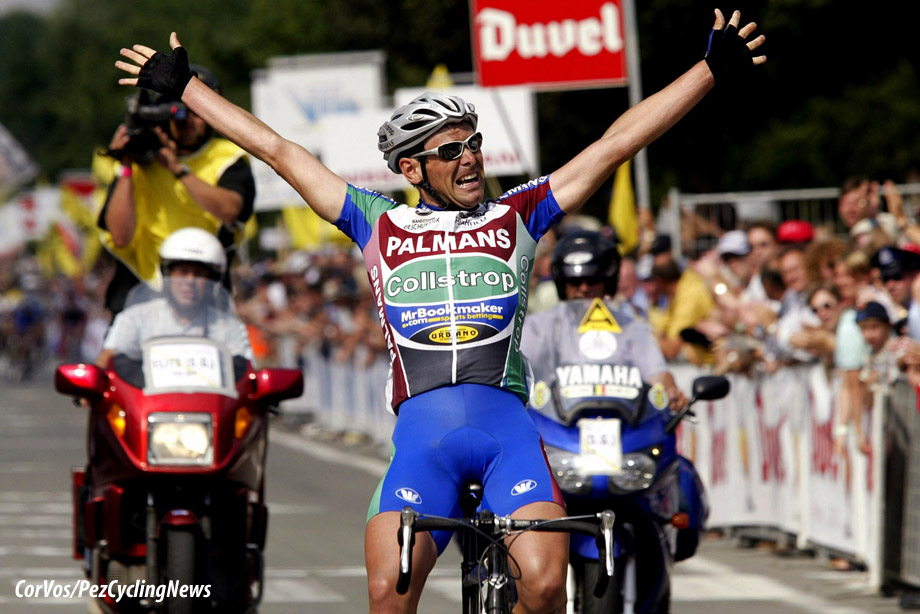 PEZ: Your win in the 2003 National Championships, very special, please tell us about that day.
Geert Omloop: It was a very warm day in Belgium. As I’d shown good condition in the races prior to the championships, I knew I had a chance to win. At 70km from the finish we got in front of the race with a break of 14 riders. I felt really strong and in the end Jurgen Van Goolen dropped everybody except me and I beat him in the sprint. 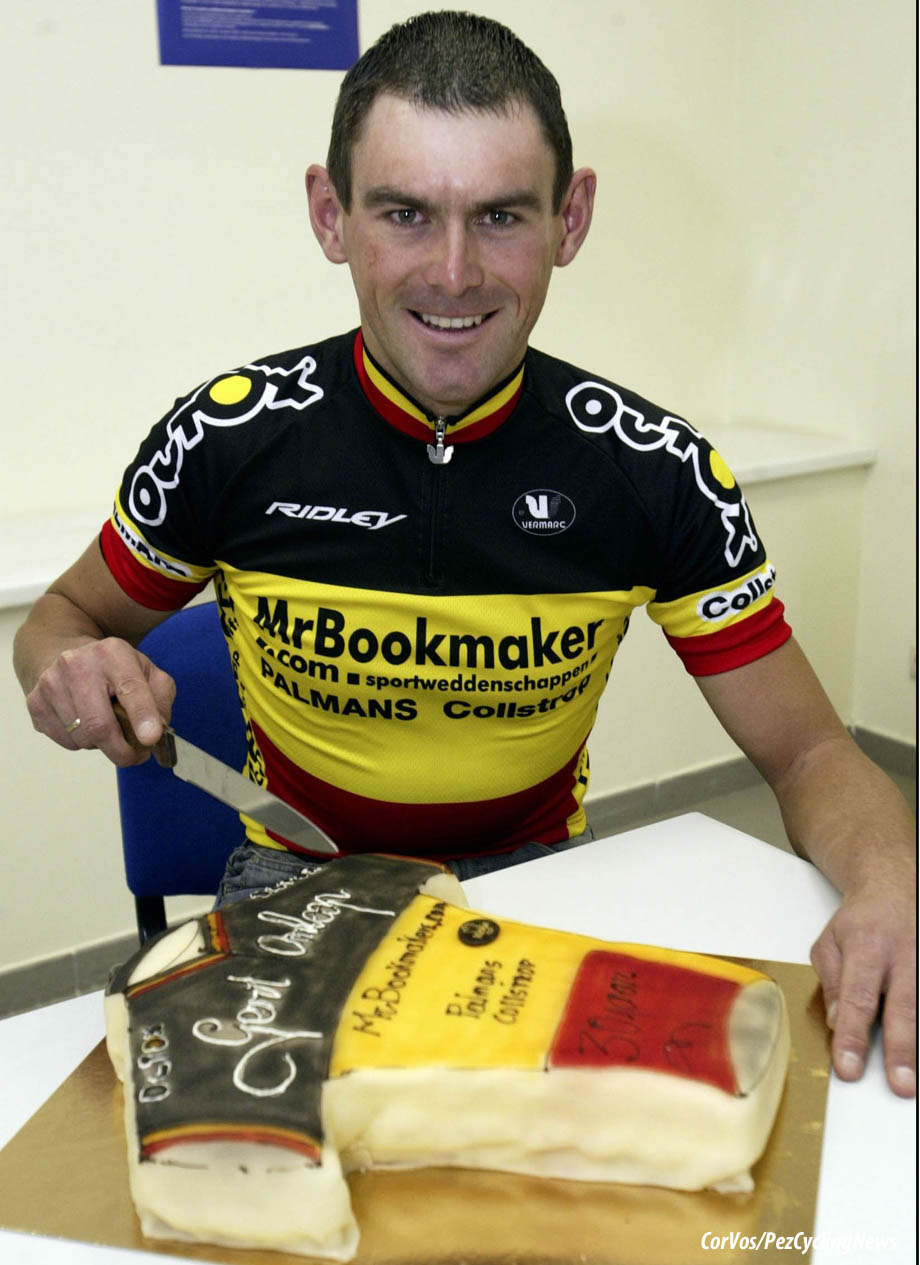 PEZ: And it took Steels – one of the very fastest – to beat you in 2004.
That day I was the strongest in the race but I was not able to drop Tom Steels. In the sprint he beat me by a few lengths. 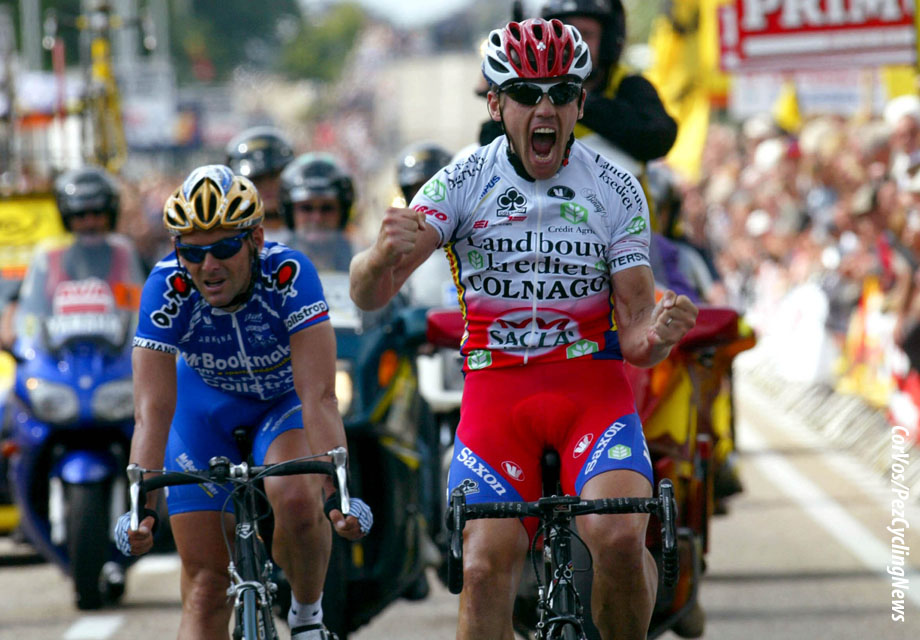 PEZ: In ’96 you were with a Polish team, tell us about that.
Actually I started in ’97 with a German team; the year before I was stagiaire in that Polish team.

PEZ: So your pro career really started with a German team?
Indeed, I started at EC Bayer; a German team with almost only neo-pros. It was a great experience. 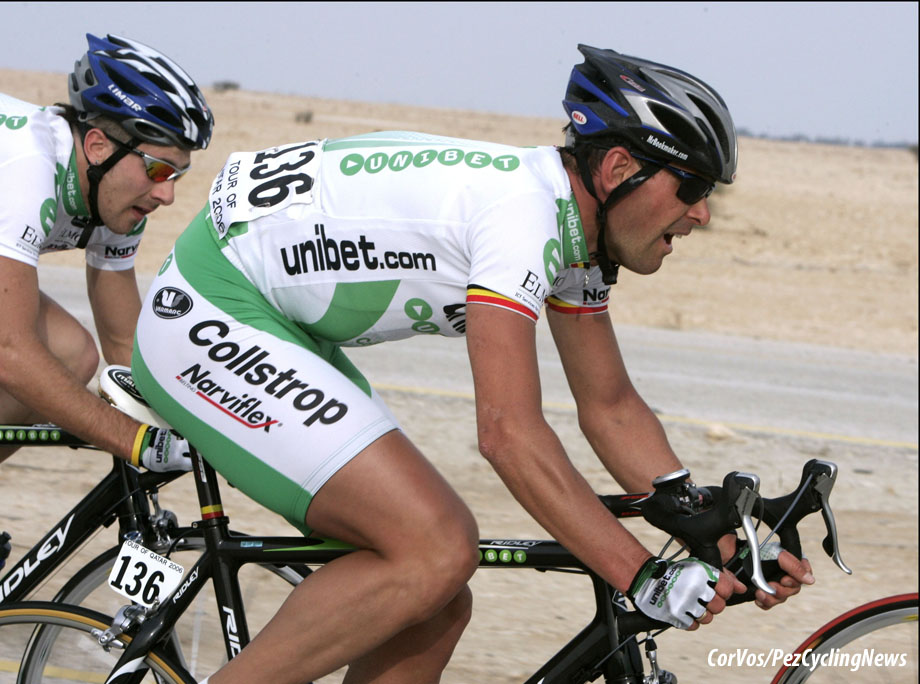 PEZ: You were with Unibet – the UCI failed the riders badly there.
I have to admit that the riders were not helped by all the bad news, the politics between the UCi and ASO but we tried to focus on our job and to do the best we could.

PEZ: Which team did you enjoy being in the most and why?
My first years at Palmans Collstrop were really fun. We were a bunch of young riders with the same ambition – Erwin Thys, Peter Wuyts and Roger Hammond; we were all good friends and we still are in contact with each other. 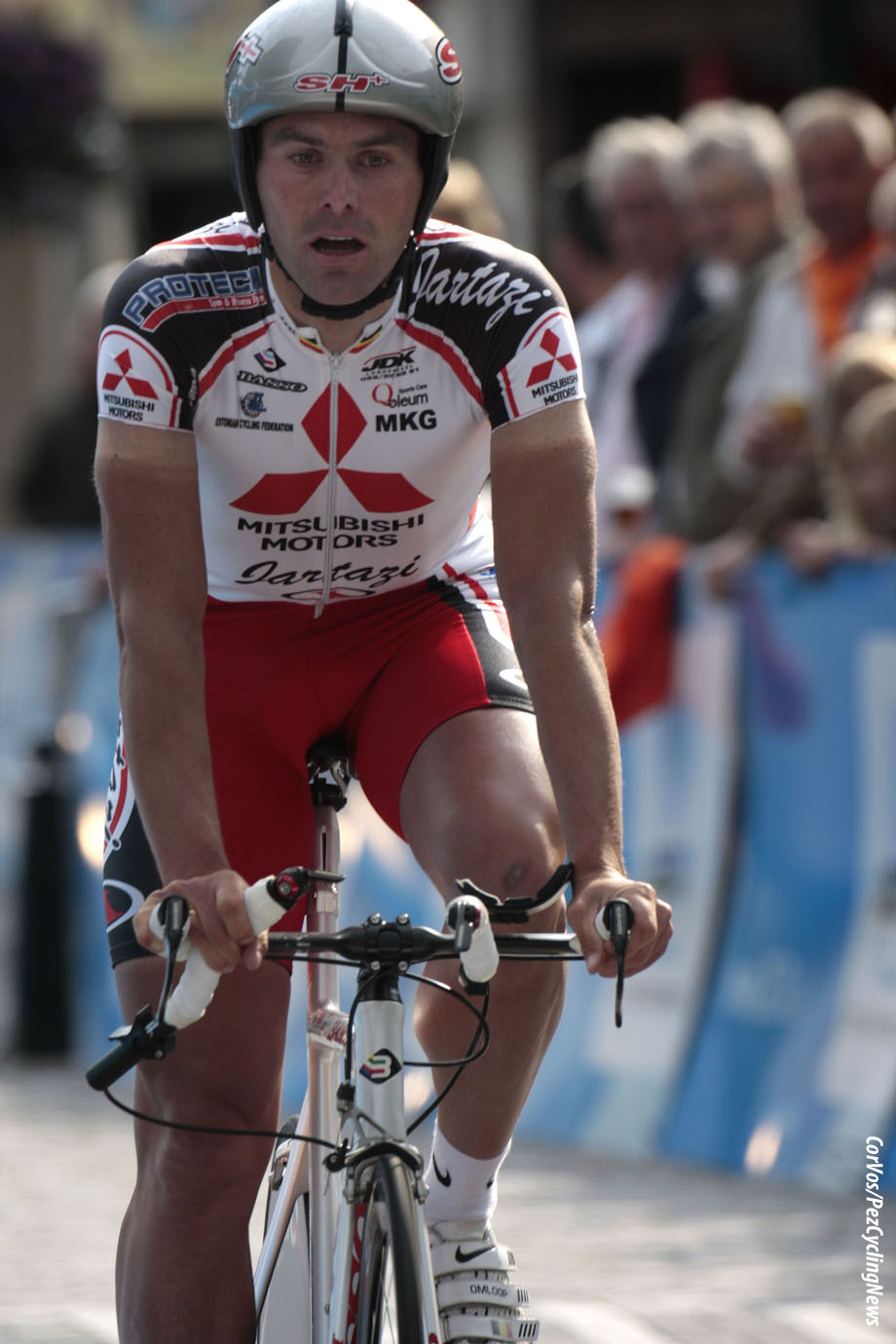 PEZ: You were always a rider who paid a lot of attention to your appearance – tell us about that.
I was not focused on that really, but looks became more and more important, so a nice bike, shoes, helmet and glasses were a must.

PEZ: Which was your favourite race?
As my focus was on kermis races a lot I was really happy to ride these types of races. But my favourite race was for sure Paris-Roubaix. 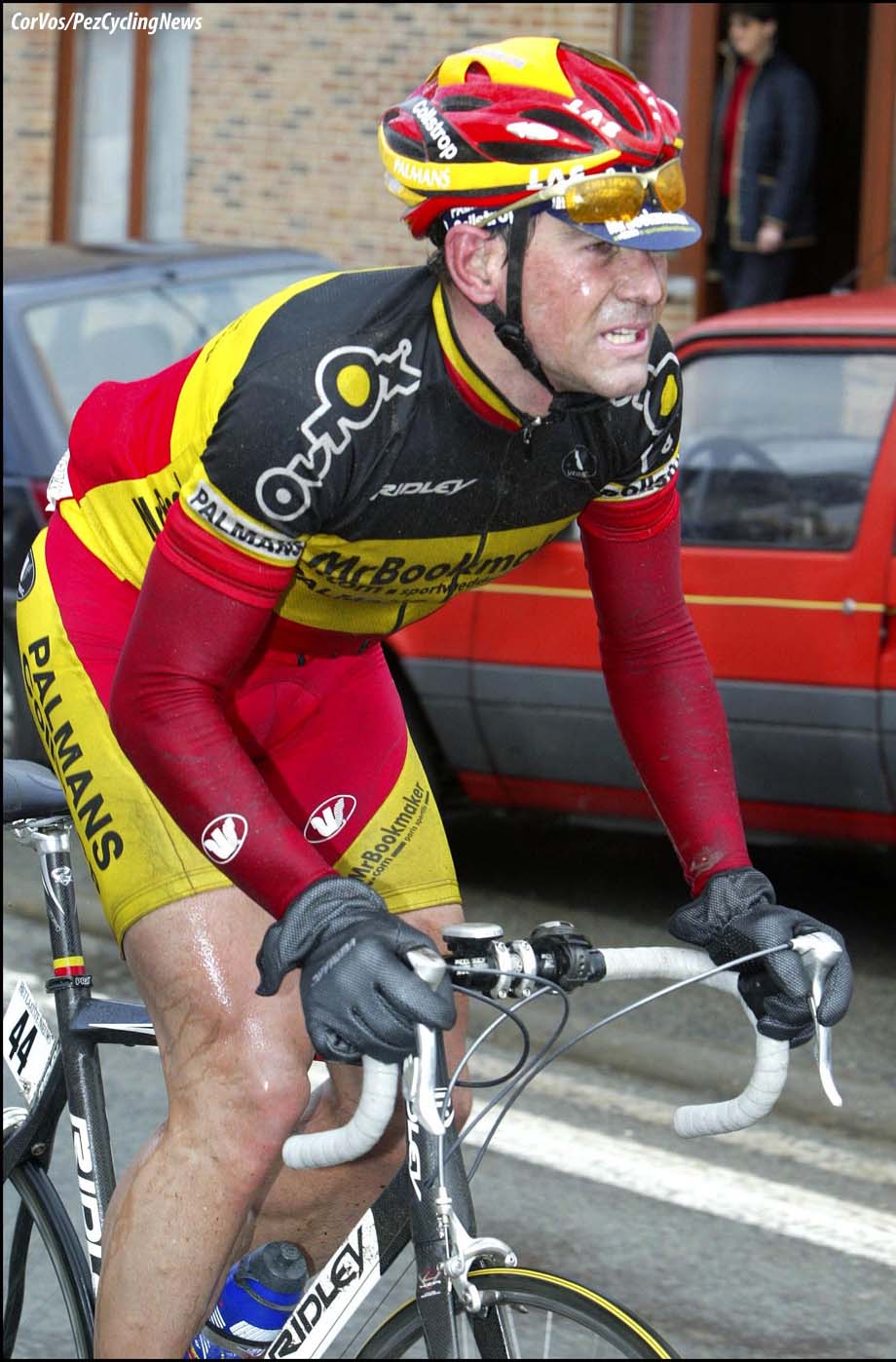 PEZ: Is there a race you should have won but didn’t which you still think about?
That would be Paris-Roubaix; but my capacities were not good enough to win such a races.

PEZ: You quit after 2010 but were still winning – at Westrozebeke – why stop?
I got a job opportunity as rep for Ridley, and I was already 36, it was a good time to stop. 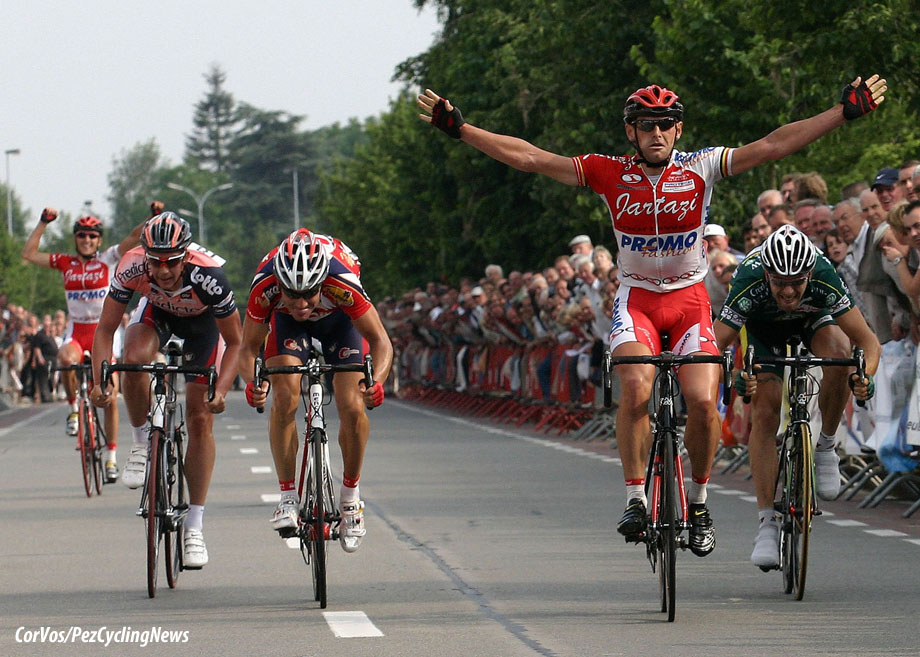 PEZ: Tell us about how you trained – were you ‘old school’ with hours on the bike or ‘scientific’?
I didn’t train scientifically; I trained on my own feelings and experience.

PEZ: You rode 14 full pro seasons – what were the biggest changes you saw in that time?
In my years as a pro the material changed a lot during those years; aluminium frames became carbon, electronic shifting, carbon wheels… 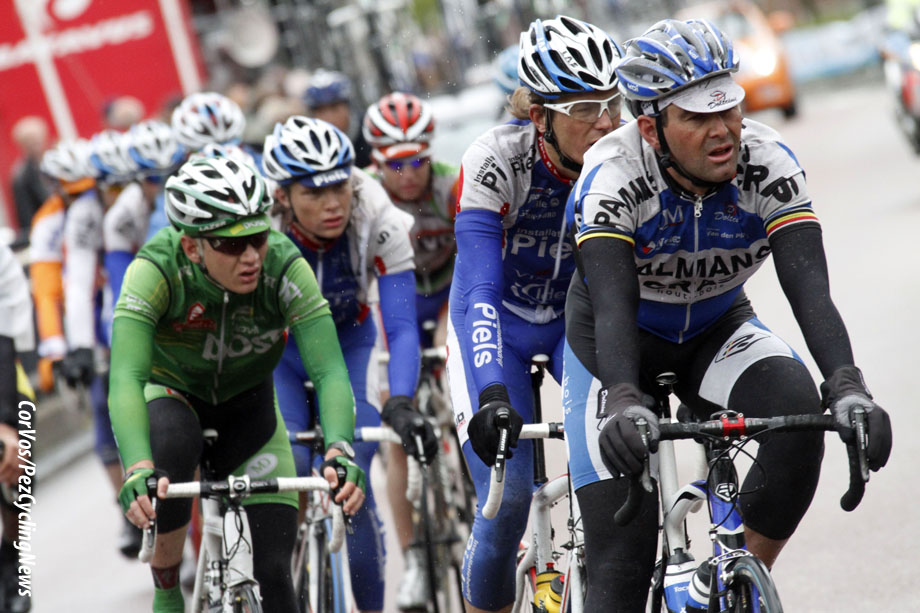 PEZ: What do you miss most about being in the pro peloton?
The life of a pro; every day ride your bike – and the competition too. 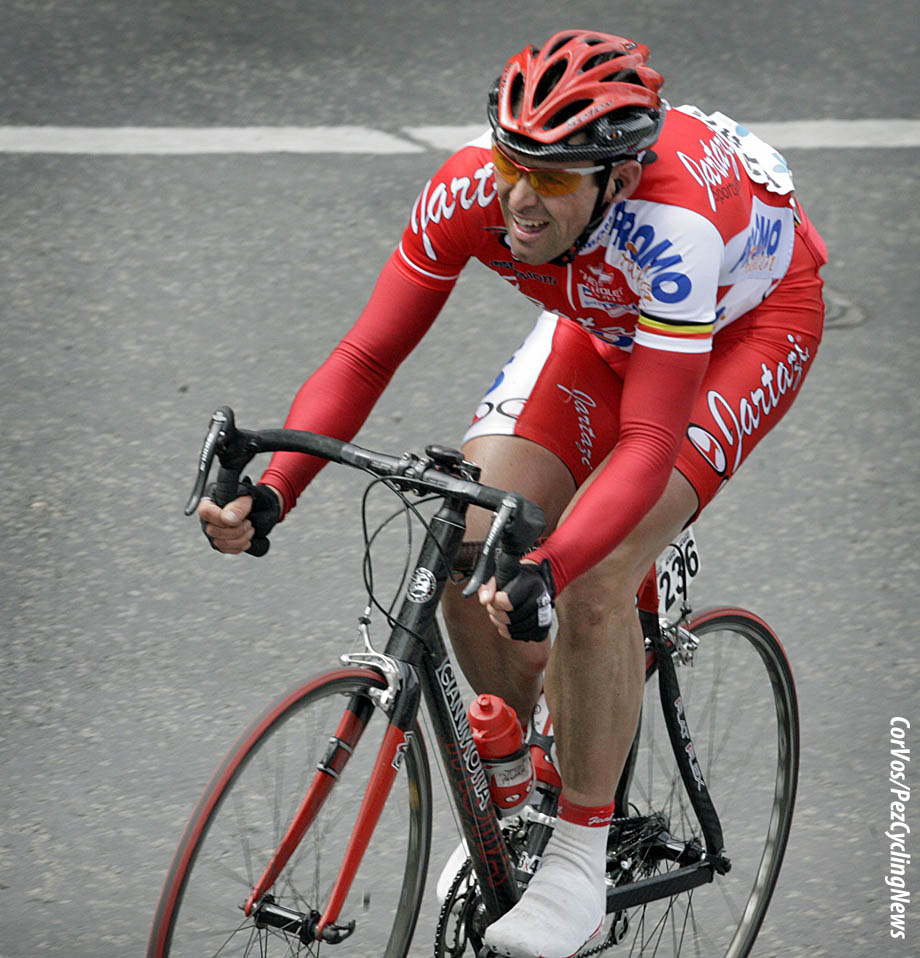 PEZ: What don’t you miss?
Training in cold and bad weather and the risks during those competitions! 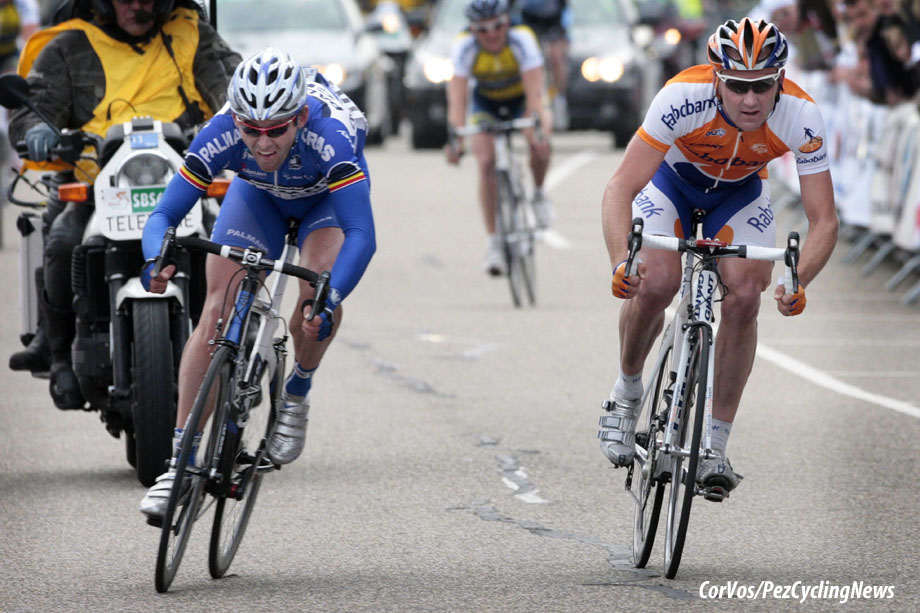 PEZ: Is Belgian Cycling better or worse than when you started, in your opinion?
I think it is at the same level at the Classics and even better now in the big Tours.

PEZ: What do you do now?
I am working for Specialized in sales and events. 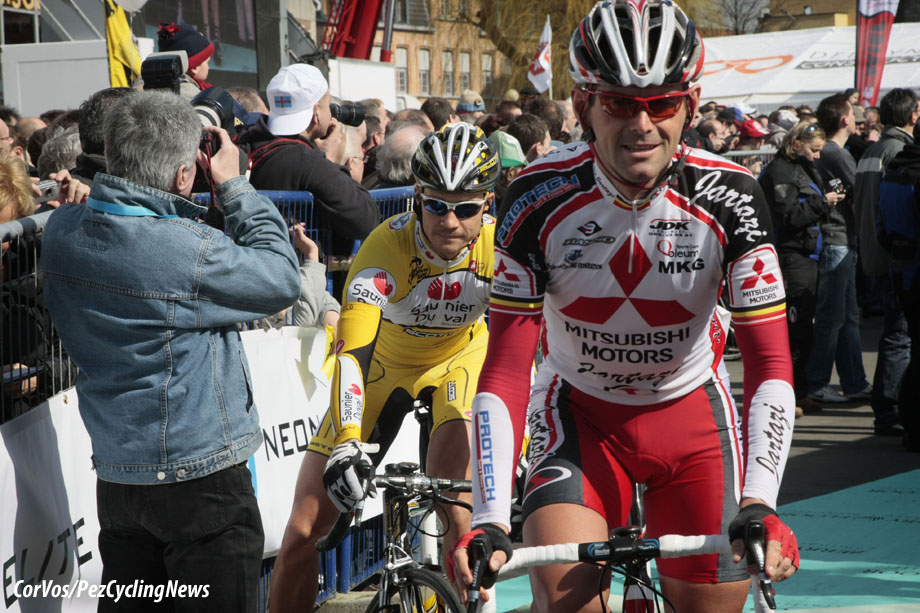 PEZ: Is there anything you wish now you had done differently with your career?
No, not really, but perhaps I should have had more confidence in the beginning of my career so I would not have focused directly on kermis races so much. 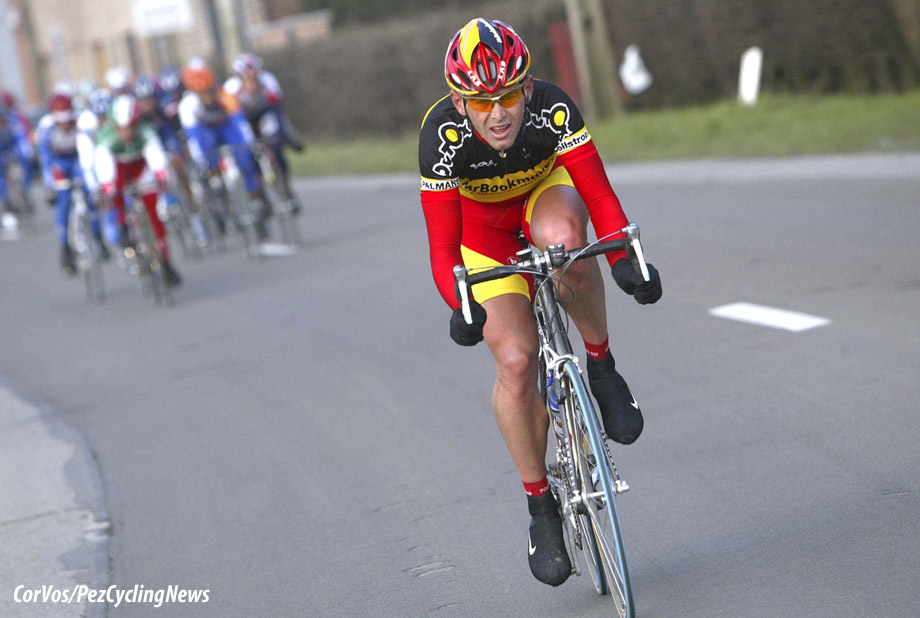 # No ‘scientific’ training, we could have guessed that one. With thanks to Geert for his time and for sharing his memories. # 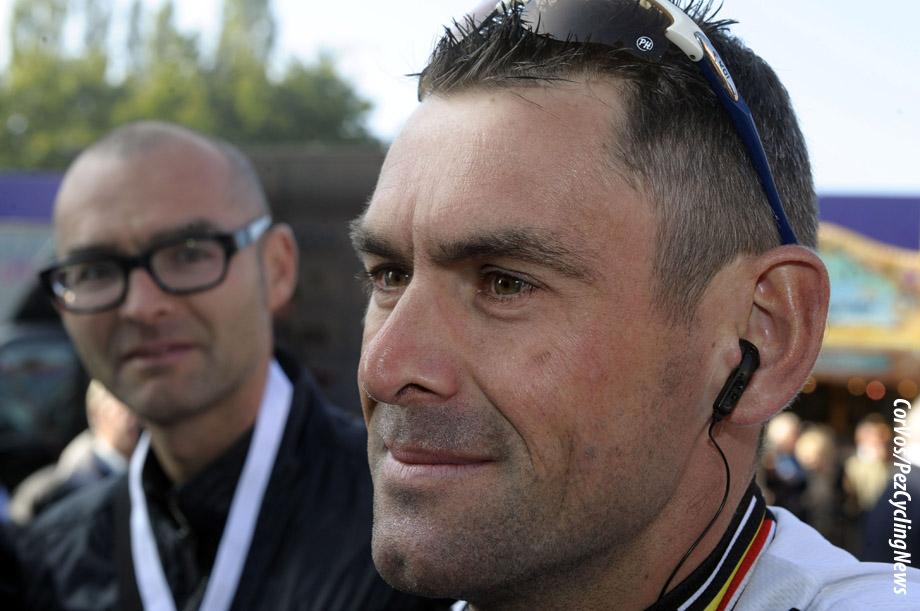