Rider Interview: No races at the moment and the World of cycle sport has stopped. What do the riders think? Ed Hood tracked down James Shaw of the Danish Riwal Readynez team to get his lowdown on the lockdown. 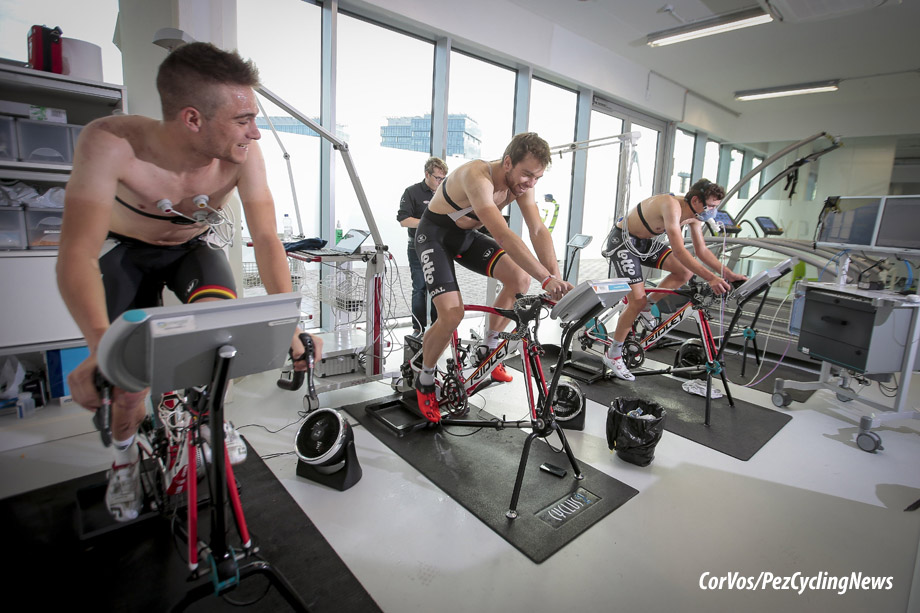 Back to in-door training for James?

Corona Virus, it’s the only topic in town right now and if, like me, you can’t imagine life without cycling then it has much to answer for; not to mention the drastic effect it’s having on people across the world. We caught up with professional James Shaw who rides for the Danish Pro Conti. Riwal Readynez Cycling Team to ask about how it’s affecting him as a pro with his season just getting into its stride then having the rug pulled from under him.

Although only 23 years-of-age Shaw is an experienced rider who spent two years on the World Tour with Lotto Soudal then a season back in the UK with SwiftCarbon Pro Cycling before ‘bouncing back up’ to Pro Conti. with Riwal Readynez. We spoke to him at his new home in Derbyshire, England’s scenic Peak District. 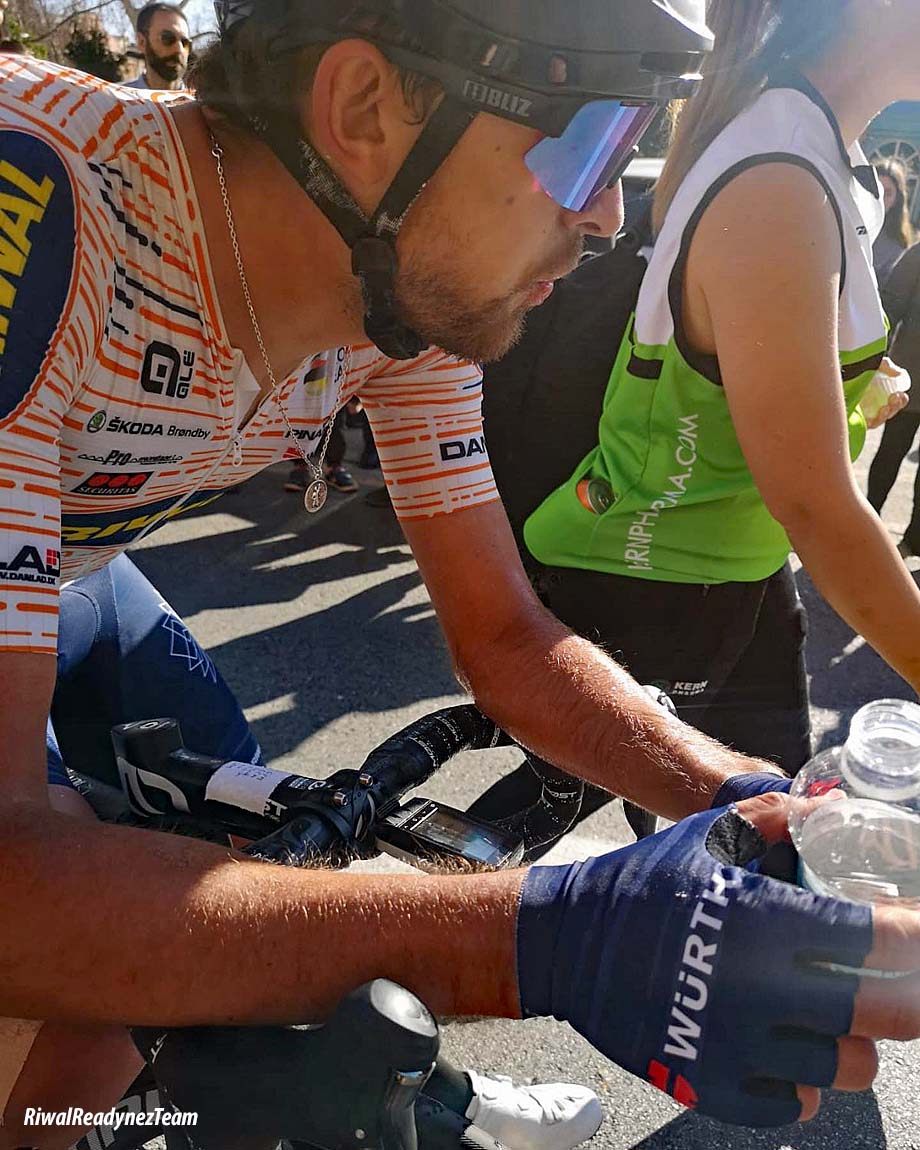 A bit of sweating for James in Arabia

PEZ: You had a nice start to season, James with top 20 in the in the UCi 2.1 Saudi Tour.
James Shaw: Yes, after that I had the Ruta Del Sol and then to France for the UCi 1.Pro races the Faun-Ardeche Classic and Royal Bernard Drome Classic. I caught a bit of illness on the plane to Saudi but soldiered on and whilst I wasn’t at my best I was reasonably happy with my result. And we had Andreas Kron from the team in the top 10 overall.

PEZ: And how’s Riwal Readynez working out?
Mega – it’s exceeded my expectations. In the past I’ve been on teams where there was money but the organisation was lacking – here it’s the opposite, the budget may not be the biggest but the organisation is excellent. And I’ve forged good links with my team mates and management so I’m very happy with things. 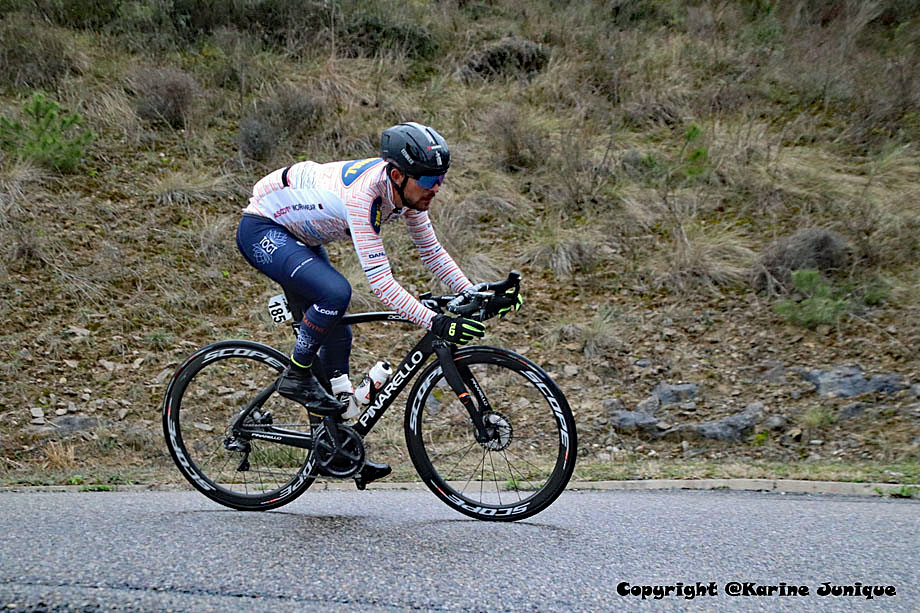 PEZ: How was the step back up from UK domestic racing to jousting with the likes of Bahrain and UAE in Saudi?
It was good to be back and competitive every day – stuck in at the front of the race. It’s a good place to start racing and if you’ve been starved of racing for a few months it’s sometimes hard to find that last bit of speed – but like I said, I was happy with how it went.

PEZ: Ardeche and Drome are tough races; the French ‘Opening Weekend.’
They were new races to me but I must say that they were good races if very cold and wet! I wasn’t going so well in the Ardeche but had better legs the next day – no massive results but I gave it my best. I preferred starting there rather than in Het Nieuwsblad and Kuurne; I’ve ridden up there in Flanders in the past but I’m not crazy about those cobbles. It’s not as if the French field is second string, Nibali, Bardet, Barguil, Alaphilippe were all there – you could say it’s a climbers ‘Opening Weekend.’ ‘Horse for courses’ as we say. 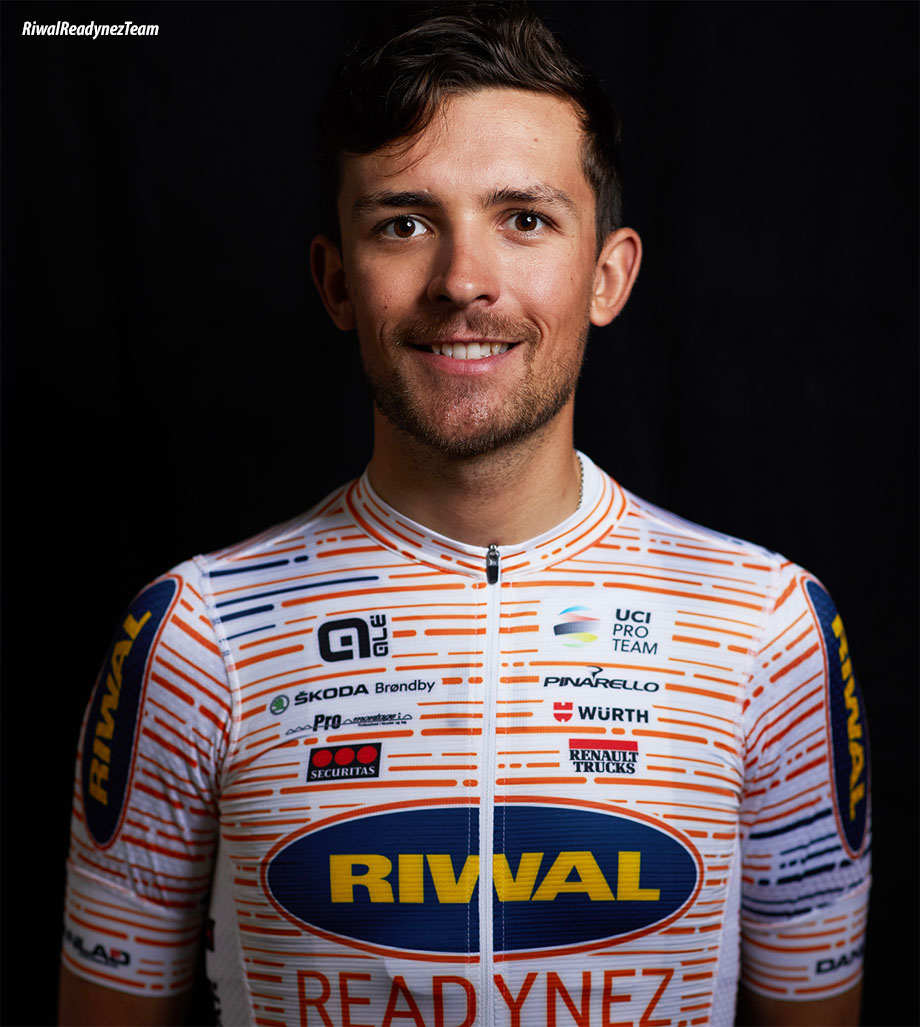 PEZ: When did you get first inklings of the ‘Corona crisis?’
The first signs came when some of the early season races in China were cancelled. But I guess it was on Monday March 9th that it got really serious with the team locked down in Denmark due to Danish Government policy. The team had no option but to comply and I know that a similar situation applies in Spain and I think France is going to follow suit. Luckily I was home in England before it all ‘hit the fan.’ I was actually meant to go to Spain training, but think I made the right decision given the situation there where you’re not even allowed to go out on the bike on pain of the police stopping you. There’s actually a ban on riding bikes and fines can range from €500-€3000 for, “unnecessarily being outdoors.” My ‘other half’ is actually stranded out there just now and we’re trying to figure how to get her home.

PEZ: What’s the brief from the team?
Stay healthy, maintain base form, don’t get fat and if racing starts up next month, be ready. But to be honest we’re all a little lost because no one really knows what’s going to happen. I’m having a few days rest then I’m going to get back into training seriously. But to be realistic, it’s pretty much inevitable that most of us will contract the virus and I’d rather catch it now and get it over with rather in a couple of months when we’re racing again and I have good form. 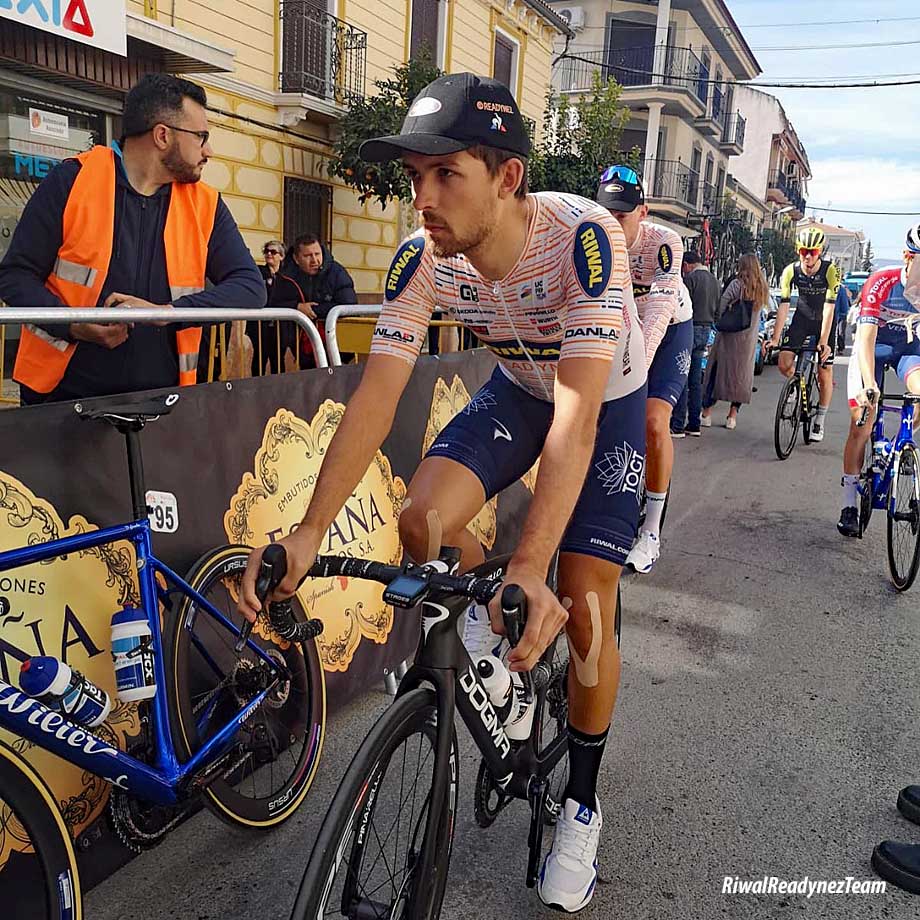 PEZ: Remind us who coaches you and what’s their advice?
I’m trained by TrainSharp, John Sharples’ organisation. I was supposed to be racing in Limburg after I came back from Spain but the methodology now is not to lose form but not to get into speed work until the time comes when we know what’s happening.

PEZ: What’s the situation where you are?
I’m in Derbyshire, the Peak District and there’s been a bit of a panic buying in the shops; they’re sold out of Paracetamol, toilet rolls and hand sanitizer – it’s a bit crazy. So far there have been two fatalities in our area; they’re not testing anyone and the advice now is to self-isolate but schools and shops are still open. 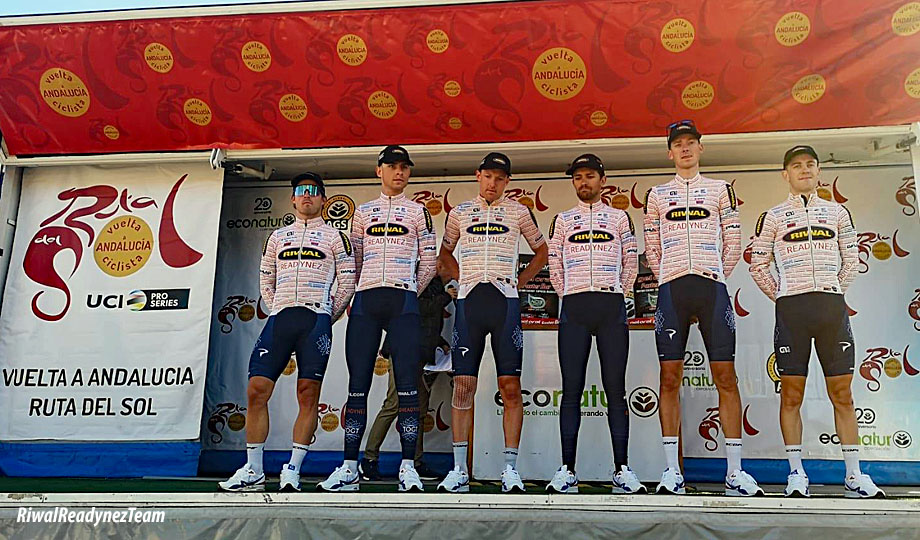 The team line up in Spain

PEZ: Are you keeping in touch with your team mates?
We’ve set up a group chat on social media and we’re encouraging each other to keep our heads screwed on. It’s easy if you’re training for and motivated to ride the Classics and that’s taken away from you for your head to go down and start eating French fries. You can start thinking, ‘what’s the point?’ And that has to be avoided so we keep each other’s heads up. It’s time to do stuff that perhaps you wouldn’t if you had a busy training and race programme – perhaps a bike fit or get yourself into the wind tunnel to work on your time trial position. All of that said, it’s hard not to feel a little lost.

PEZ: Does the time lay heavy with you?
I’ve just bought a new house which is a bit of a wreck, the plan was to start work on it in the off season but I can get on with that now. 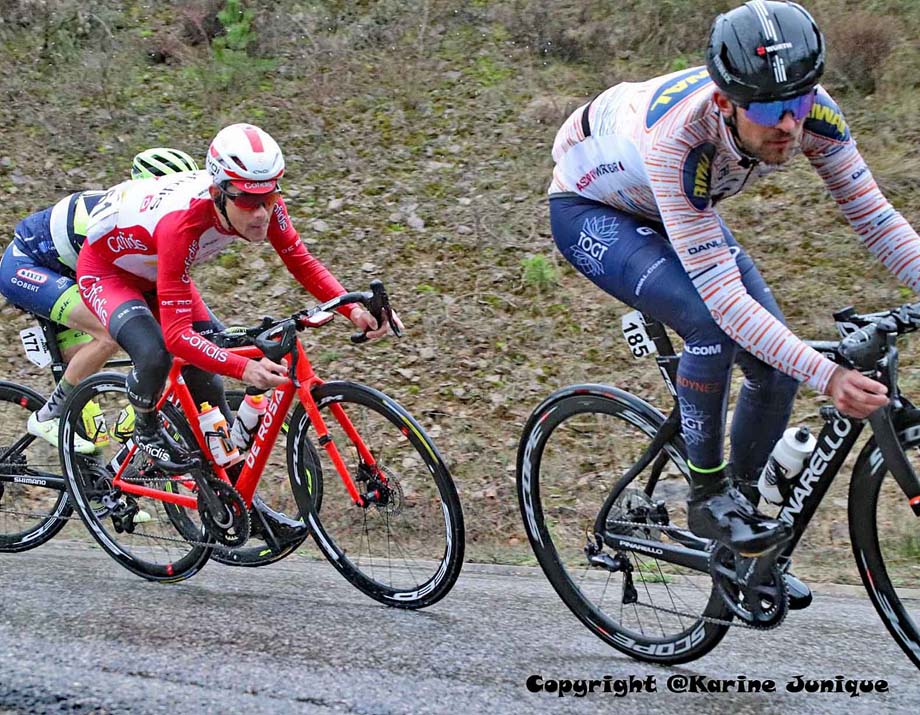 PEZ: What about the financial aspect as it affects you?
As far as I am aware the team will continue all per our contracts – the Danes are very open and up front about such things, but I think it’ll have a very negative effect upon the UK scene where sponsors are on the brink and this could well push them over the edge – getting no return for their investment. Personally I’m going to work hard at pushing my social media, if there’s no racing all year I don’t want to get forgotten about!

# With thanks to James for his time and insights – troubling times for all of us. More info on the Riwal Readynez team HERE. # 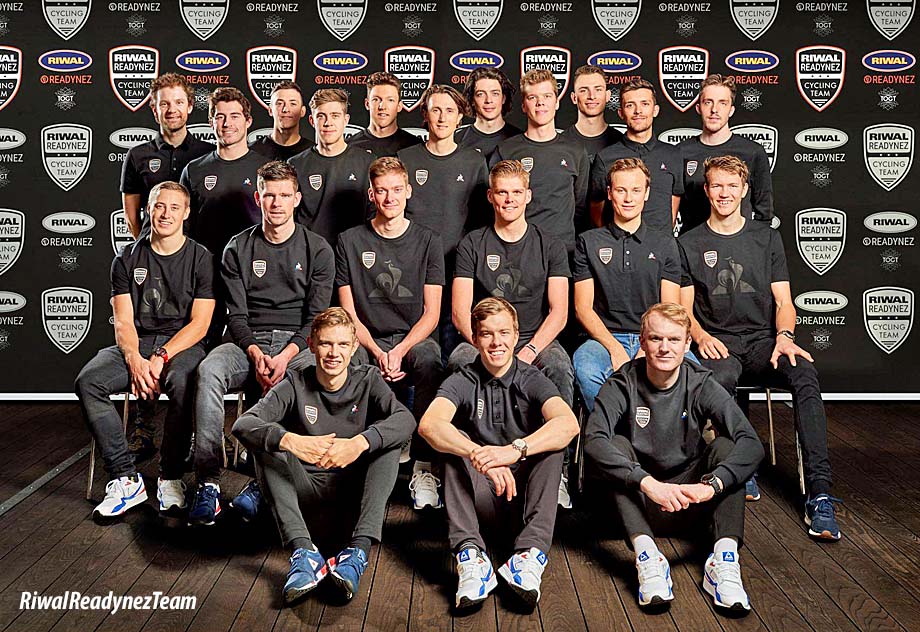 Life Under Lockdown for the PEZ Crew