If a man like Franco Ballerini tells me that the young star to look out for this year is Daniele Bennati, there is only one thing to do… Slam-Dunc him!! While I was at Domina Coral Bay in Eygpt I spent some time with this very pleasant lad. Just to put a little touch to this interview, a week later at the Giro delle Mediterraneo, he blew away his challengers to win the second to last stage…….a stage that in 1992 a young Italian rider called Mario Cipollini happened to win!!!! 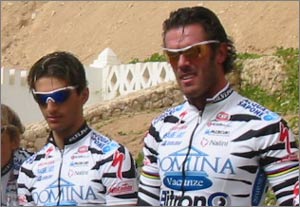 PCN: What do you like most about cycling?
DB: EVERYTHING, I grew up with cycling. My father is a cyclist, so I grew liking the atmosphere.

PCN: What do you like least about cycling?
DB: Long Climbs!!!!

PCN: Who is your/was your idol?
DB: I like Ullrich for the Stage races as he is sheer power: For the one day races , I will obviously say Cipollini but I admire Musseuw!

PCN: Which race do you think is suited to your way of racing?
DB: The Milano- San Remo, Flanders and the Parigi- Roubaix

PCN: If you could win any race which would it be?
DB: All the ones above but if I had to choice just one……mmmmmm……The Flanders

PCN: Franco Ballerini was asked in a PCN interview who would be a young Italian cyclist that would explode this year and his answer was Daniele Benatti. What do think your strengths are ?(then I’ll tell you what Ballerini thinks your strengths are!!)

DB: OH……Ballerini is impeccable! We have a mutual respect for each other. We have a very similar way of riding, maybe I’m slightly quicker in the sprint. Why he thinks of me as the young rider to explode this year…… maybe as I am able to sit and ride through the cobbles using my power. (Note: Ballerini said that Bennati will explode this year as he already has a good balance between physique and thought.)

PCN: What are your aims this year?
DB: To do well in the races I said before, I will obviously be there for Cipollini in the Milano: San Remo and Flanders and to learn, then in the Parigi-Roubaix ,which I didn’t do last year as I was injured, I hope to have a bit of space to do a good race. 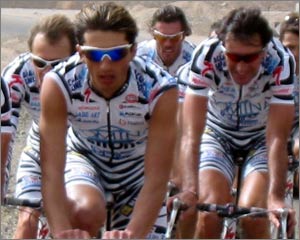 PCN: What are your aims for the future?
DB: I just want to do well this year so that I can understand my possibilities for the future. They will always be the Milano-San Remo Flanders and the Parigi-Roubaix.

PCN: How do you pass your spare time?
DB: Nothing much. I spend a lot of time with my family and dog as I’m away a lot, also with my girlfriend Chiara. I like to take the car a go and visit places in one day.

PCN: The first name that comes into your head when I say:
– TDF? Armstrong
– Parigi_Roubaix? Ballerini
– Sprinter? Cipollini
– Climber? Pantani

PCN: Who do you think will be the man that can beat Armstrong in the next TDF?
DB: ha ha ha, very very difficult. I think they will be battling it out for second place but I think an “in forma“ Ullrich would make Armstrong’s TDF very difficult.

PCN: Who do you think will be the man that is capable of beating Cipollini constantly into second place in a sprint?
DB: Again very difficult. Mario 100% is virtually unbeatable. He is such a pro from his preparation to tactics, to team spirit , to believing, to sprinting. There are only a few like Mario for this.

PCN: What makes these two great athletes so good (Cipollini Armstrong)?
DB: There is 1 Cipo and 1 Armstrong. They are both the best in what they do. I don’t know Armstrong but I think he has the same idea of professionalism as Mario. Nothing is left to chance.

PCN: What have you learnt from Cipollini?
DB: To believe in myself.

PCN: What would you copy from Armstrong?
DB: Well if I copied Armstrong I would win, wouldn’t I!!!?? I think I would copy his professionalism.

PCN: What has been the best advice you have received and from who?
DB: Difficult as I’ve received lots. Probably the one I remember most was from my girlfriend, Chiara. Being mentally prepared in cycling is so important but 2 years ago I really didn’t believe in my potential. The results were coming in and I knew I had a certain talent but I didn’t believe it was good enough for the professional world of cycling. I spoke a lot about this with her and she convinced me a made me believe in my talents.

PCN: Duncan wants to Challenge you and you can choice from one of the six following things; Eating a doughnut without licking your lips, Game of Squash, Game of Pool, A feet first 100 meter swim race, giving me a 30 min start on any climb of your choice, the most number of press ups in a minute?
DB: It will have to be 30minutes on any climb.

After the these questions we carried on talking. He is a good lad, very calm, pleasant and good fun,very much like Ballerini!

On the Ballerini note, we spoke about him and Daniele couldn’t find enough words to say about him, but finally he said “Ballerini is just impeccable!” On the 3 hour training ride with part of his team, Domina Vacanze- Elitron- RDZ, in the Desert near Sharm El Shiekh, he spent most of the ride on the front. He has a great physique and looks good on a bike and yes he has power and the agility of another great one day classic rider in the making.

He was already a reserve for the National Team in Zolder and Hamilton is more his type of course……..mmmmmm Could this be the surprise?? WATCHOUT FOR HIM!