PEZ: Congratulations on silver Michael, are you happy with it?
Michael: For sure, yes, it was our first Olympics and we were aiming for a medal.

When you’re an athlete you don’t want to be beaten and to loose the final was disappointing, but to get Olympic silver was great. 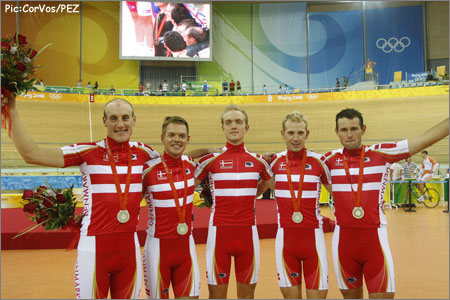 PEZ: The team only did 4-02 in the qualifying, tactics?
Michael: No, I didn’t ride the first round but I was there, of course and I could see that the guys were very nervous.

There was a lot of expectation upon us after being second in the Worlds and you could see the pressure.

PEZ: Round two and 3-56, did you think you could win, at that stage?
Michael: No, we knew it would be tight between us and New Zealand, but we were lucky and they died with three laps to go.

And of course, we knew that the Brits would be fast. 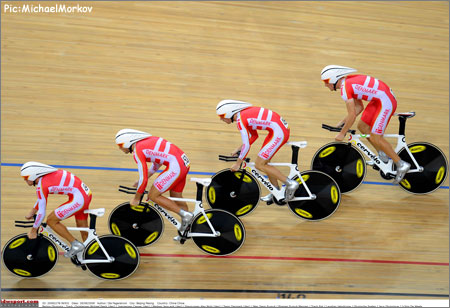 PEZ: The final – and you went slower.
Michael: Our legs were a little heavy, but we couldn’t see the GB team across the track, they went ahead of us from the start and we lost momentum.

PEZ: What were you up to between the Worlds and Beijing?
Michael: Pretty much on the road.

At the Worlds I rode the Madison but not the team pursuit; I wasn’t strong enough to push the big gears that you ride in the event these days.

During the summer, I did a lot of power training and the road racing was good for building my strength too. 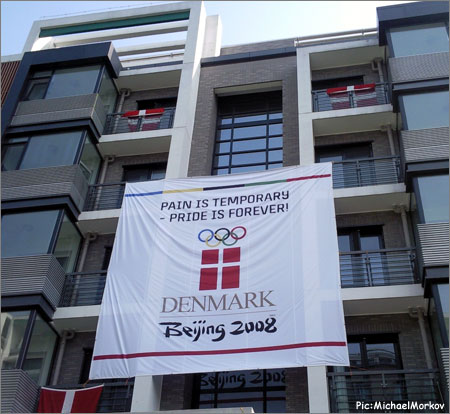 PEZ: What about team pursuit training?
Michael: We had a ten day training camp at Ballerup indoor track near Copenhagen where we did work on standing starts and a lot of short high speed efforts.

Spending a lot of time on the road and then fine tuning the speed with specific track work is the best way to prepare for the event.

We rode on Vittoria tubulars with a gear of 51 x 13, which is a tough gear; we tried 52 x 13 in training, but we weren’t sure how fast the track was and didn’t want to risk it.

I’m the ‘equipment guy’ in the team, we try to figure out what is the best for us, then buy it, or see if we can get a sponsorship deal for it.

PEZ: The GB team has the ‘Secret Squirrels’ who analyse every aspect of the bikes, diet and training in minute detail; are there Danish ‘squirrels’ out there?
Michael: No, that’s the big difference between us and the Brits – they have a coach for power, a coach for endurance and a coach for speed.

They have Chris Boardman leading a team for the bike development; guys looking at the food they eat – maybe 20 staff to back the team.

With us, there are six riders and the coach, that’s it – but we’re like a little family.

PEZ: The Madison – a disappointment?
Michael: After the bronze at the Worlds, yes we were disappointed with sixth.

I was in good shape coming in to the race and I think we rode the smartest race we could, we grabbed a points early and then the plan was to watch Risi/Marvulli of Switzerland and Wiggins/Cavendish of GB and when they went for the lap, go with them.

As the race went on though, it became obvious that neither of them was going well, and by then it was too late for us to go, everyone was marking us too heavily. 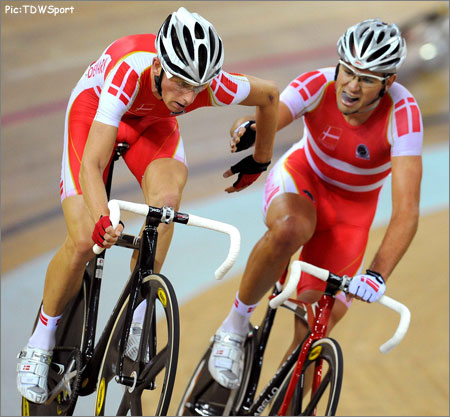 PEZ: Marvulli/Risi – I thought they’d win.
Michael: At the Worlds they should be in good shape because it’s not too long after the sixes, but it’s hard for them to get in real shape for the Olympics.

They’re not in road teams with a programme, like we are, and the Brits are, so it’s down to them individually to get in shape – that’s difficult.

PEZ: Wiggins and Cav were ‘flat’ too?
Michael: I think that Wiggins was stuffed from all of the individual and team pursuit rounds he’d ridden; it’s down to Wiggins, he’s the power, if he’s not going then that’s it.

PEZ: The rest of 2008 for you?
Michael: I had the week off after Beijing and now I want to get in good shape for the sixes.

Alex (Rasmussen) and I want to defend our title at Grenoble, we also want to get on the podium of some of the big races in Germany – and Copenhagen, of course! 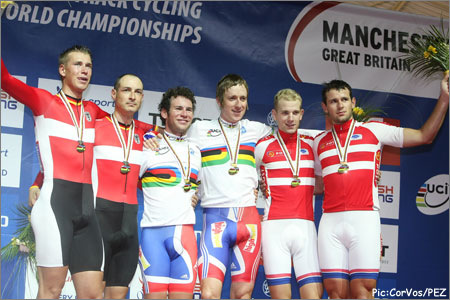 Rasmussen and Morkov are not strangers to Worlds podiums…the top step is in sight.

PEZ: You race 12 months-a-year, how do you avoid staleness?
Michael: For me, it’s the lifestyle I love. I love to train and race, there’s nothing I like more than to be on the start line in great shape, whether it’s a big race or a little one.

PEZ: 2009?
Michael: My current team (GLS – Pakke Shop) has made me a good offer and that gives the possibility of being able to ride the track as I want.

I spoke to big road teams and whilst it would be good to move to that level, all of them are negative about my spending time on the track – but my heart is on the track. 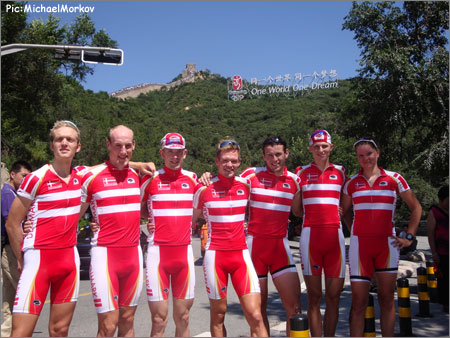 PEZ: And – apart from money – if you could have just one thing that GB has, what would it be?
Michael: The equipment, but I don’t think that we should use the money as an excuse not to beat them.

I admire them for their perfectionist attitude, we don’t have them as heroes or anything, but we respect them.

When we’re at training camps, we’re always thinking about them, what they’re doing – and how we can beat them!

With thanks to Michael for always having time for Pez.