Ex-Rider Interview: There is so much more to the career of Jesper Skibby than being run over on the Koppenberg by the race director’d car during the Ronde van Vlaanderen. Ed hood delved into the palmarès of the ‘Great Dane’ and had a word or two. 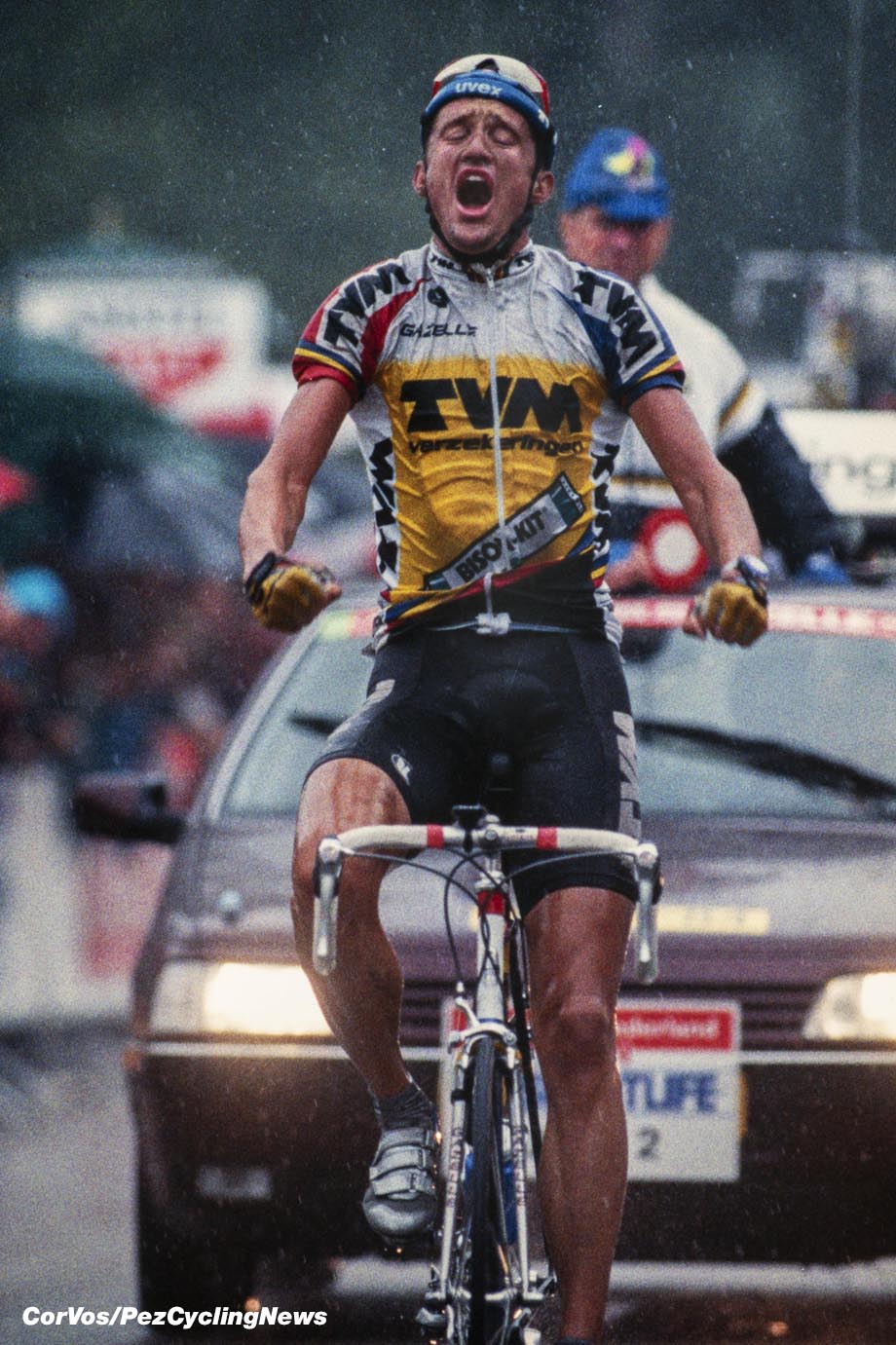 It’s a shame that Jesper Skibby is best known as; ‘that guy who got run down by the car on the Koppenberg in the Ronde,’ because there’s so much more to the man than that. In a pro career spanning some 15 season there were stage victories in every Grand Tour as well as stage wins in races like the Tour of the European Community, Tour of Denmark, Vuelta a Asturias, Tirreno-Adriatico and Tour of the Netherlands – a race which he won overall. And then there were multiple top finishes in the Classics; second in the Wincanton, third in the Baracchi, fifth in the Amstel, sixth in Flanders and Lombardy, seventh in Milan-Sanremo and Paris-Brussels. 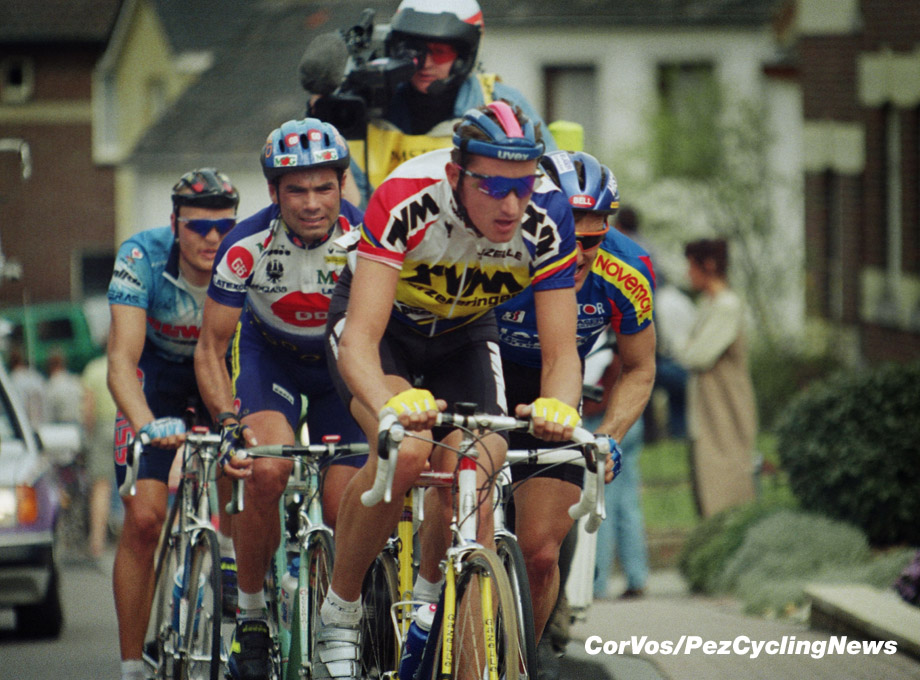 With a Dane in the rainbow jersey, high times we caught up with one of Danish cycle sport’s original stars. When I called at the time we’d arranged, the phone rang out, ‘maybe he’s changed his mind and can’t be bothered talking about his career?’ I thought to myself. But 10 minutes later the phone rang, Jesper’s wife to tell me that he’d been sleeping but once he had a coffee down him he’d be fine and would call me.

The phone rang again, amid hearty chuckles Jesper explained that they’d been to the beach and when they got home he’d fallen asleep. Laughter early in an interview – always a good sign. . .

I opened by asking if his stage win in the 1985 Grand Prix Francois Faber in Luxembourg – a top amateur race back then and still held as a u23 event which numbers Bob Jungels amongst recent winners – had been a big factor in getting him a pro contract with Belgian squad Roland – Van De Ven?
Jesper Skibby: Yes, but that was a thousand years ago! It was a small team, not much money but we were young and having the time of our lives – Brian Holm and Bjarne Riis were on the team with me, it was a lot of fun. 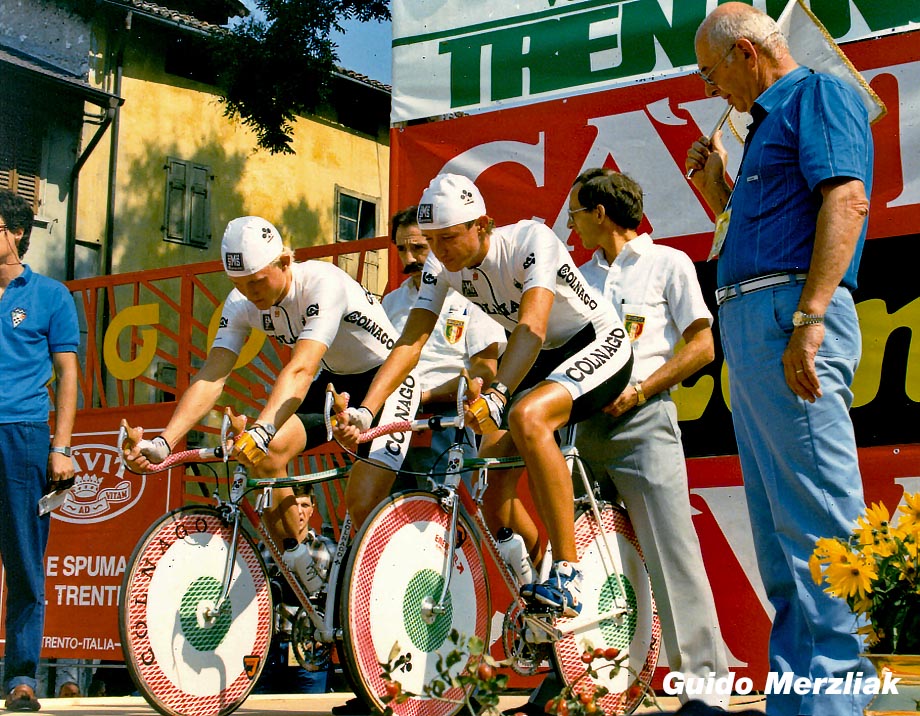 PEZ: Third in the Trofeo Baracchi team time trial behind Saronni and Piasecki as a neo-pro in ’86 – a strong performance for a young rider.
The team rode Colnago bikes and I think it was because of Ernesto’s connections in Italy we got the ride. I was paired with Brian Holm, he was so strong, so fast, I don’t remember the last 20K, it was just a blur! 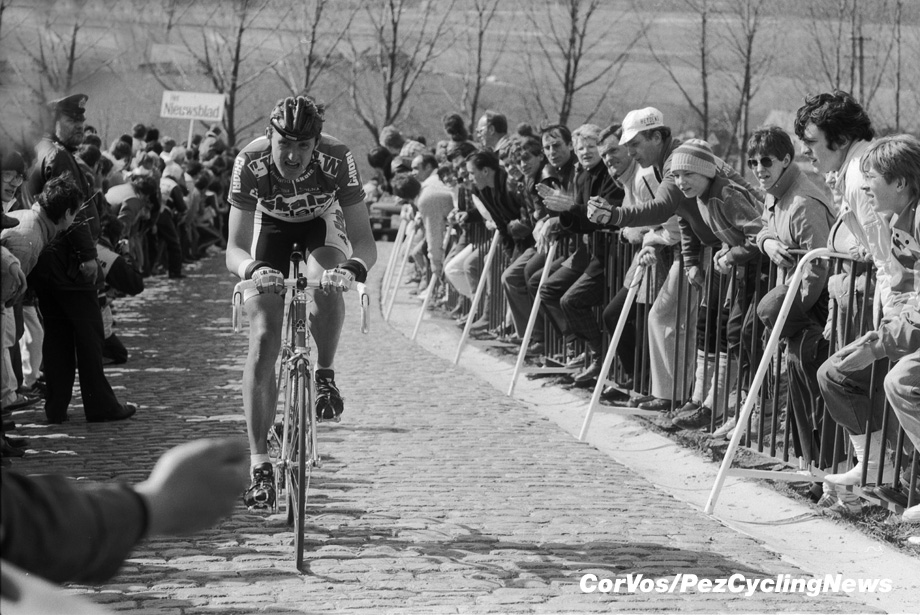 PEZ: Your first pro win came in the Tour of Denmark in ’87.
Yes, a time trial stage at Kolding, it was nice to have my first win at home. I also rode my first Tour de France that year where I took fourth in the final time trial; I started 11 Tours de France and finished eight of them during my career. 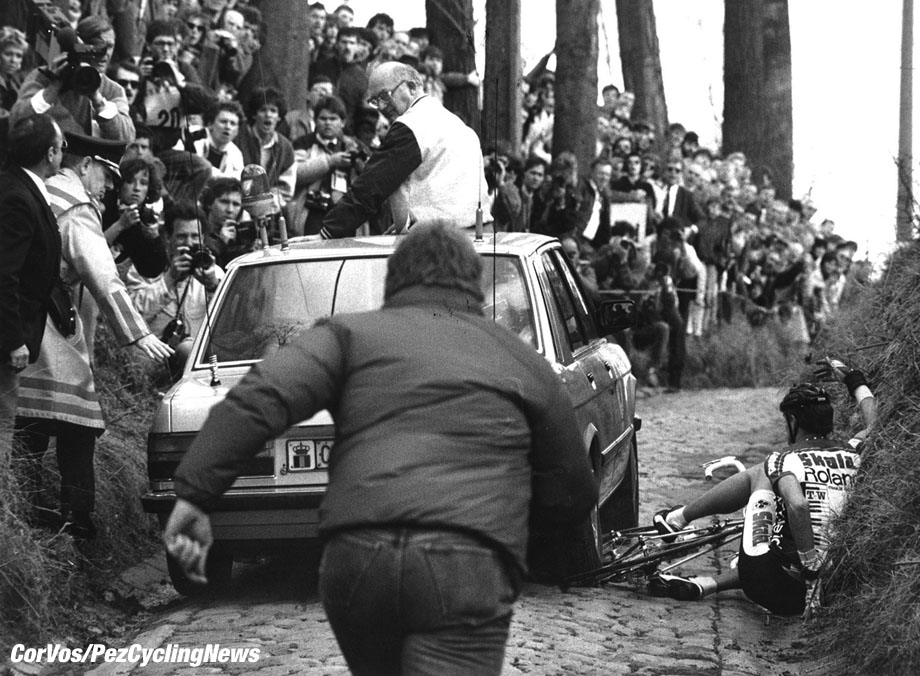 PEZ: And ’87 was the year you got run over by the race director’s car in the Tour of Flanders.
I’d been away in a break away all day, I’d never ridden Flanders before and was thinking; ‘what are these big stones we’re racing on – and what about these steep hills?’ Then I came round a corner and there was the Koppenberg, I remember thinking; ‘how do I get over this, it’s impossible?’ So it was actually a bit of a relief when my bike got run over by the car! 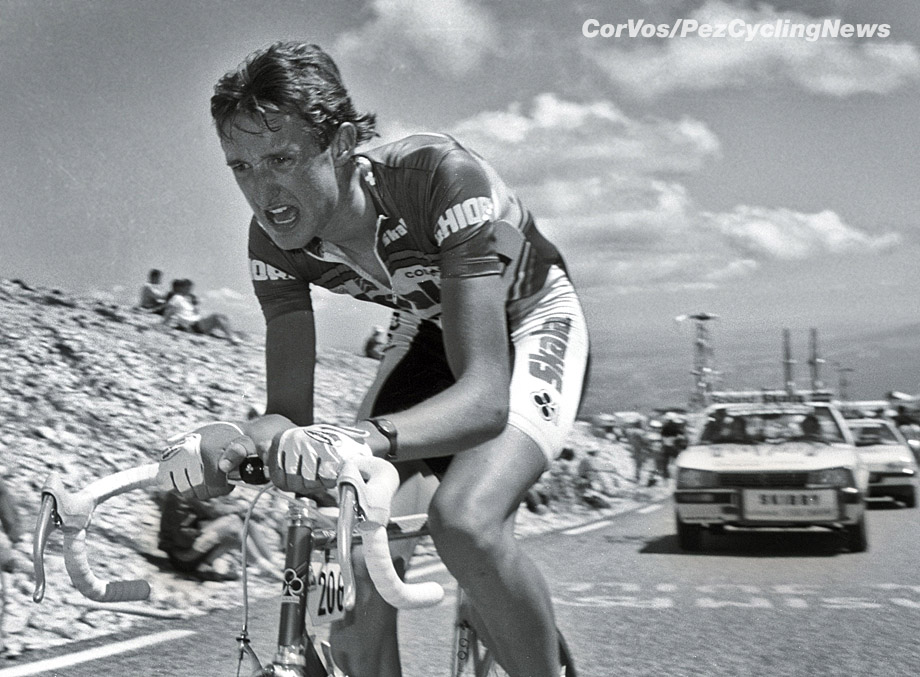 PEZ: You went to TVM in ’89, we spoke to Scott Sunderland recently and he said that perhaps it wasn’t the best organised team?
JS: Scott Sunderland! I love that guy! He’s right, there was plenty of money but the organisation wasn’t the best – the thing was though, it was a group of friends and I liked the atmosphere, I was with the team for nine years. That seems unbelievable now but I was a sensitive soul and felt safe there – and I made the results for them. Cees Priem, the manager was a hard guy but he was always good with me, like a second father. 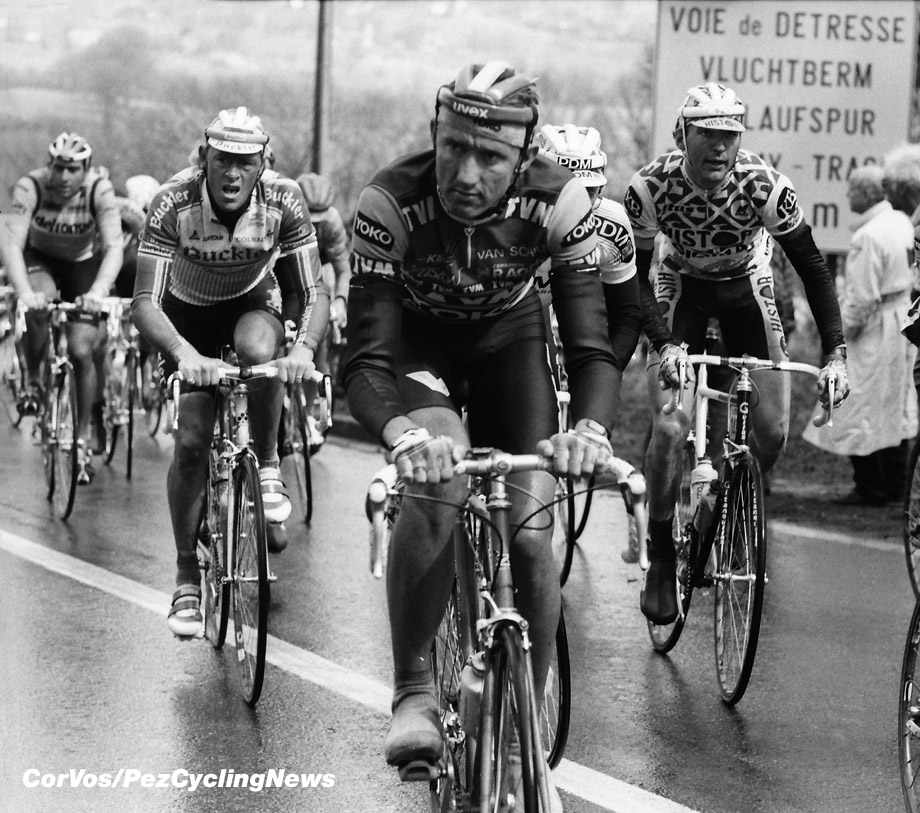 PEZ: Your first Grand Tour stage win came in the ’89 Giro.
If you were to ask me what my best win was, I’d say that one, Stage 19 in Piedmont. Phil Anderson played a huge role in setting that one up for me, as a young guy, to have a big star like Phil riding for you, it was amazing. He was a cool guy, always calm and a terrific rider. 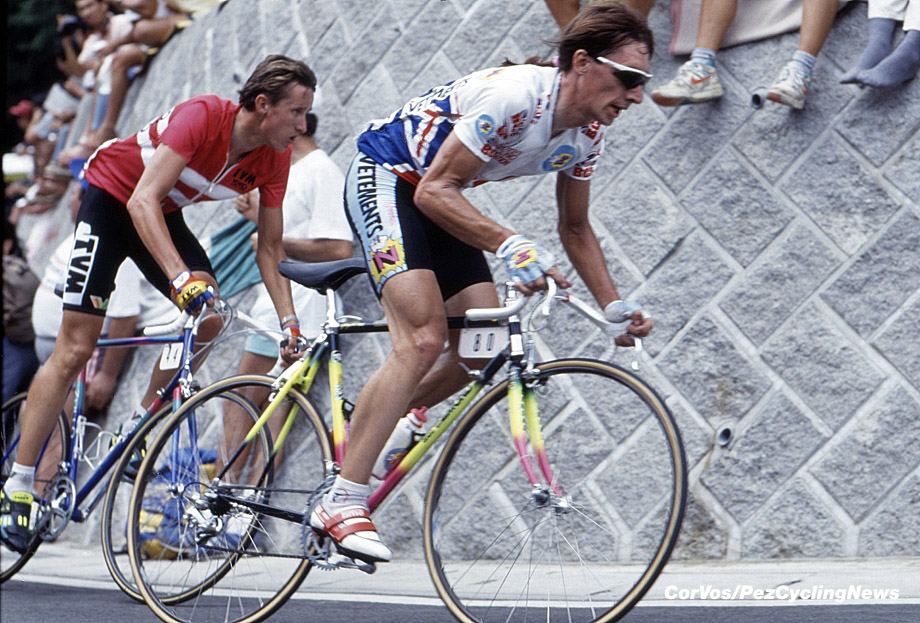 With Scotland’s Robert Millar at the 1990 World’s in Utsunomiya, Japan

PEZ: Two Vuelta stages in ’91.
That was a good year but my first stage win in Seville probably wouldn’t be allowed to stand nowadays, it wasn’t a ‘pure’ sprint. [British magazine, ‘Cycling Weekly’ described it as a; ‘A mass violent sprint with Skibby clashing elbows with Germany’s Uwe Raab (PDM)’, ed]. The other stage came on Majorca in the Circuit of Palma stage. 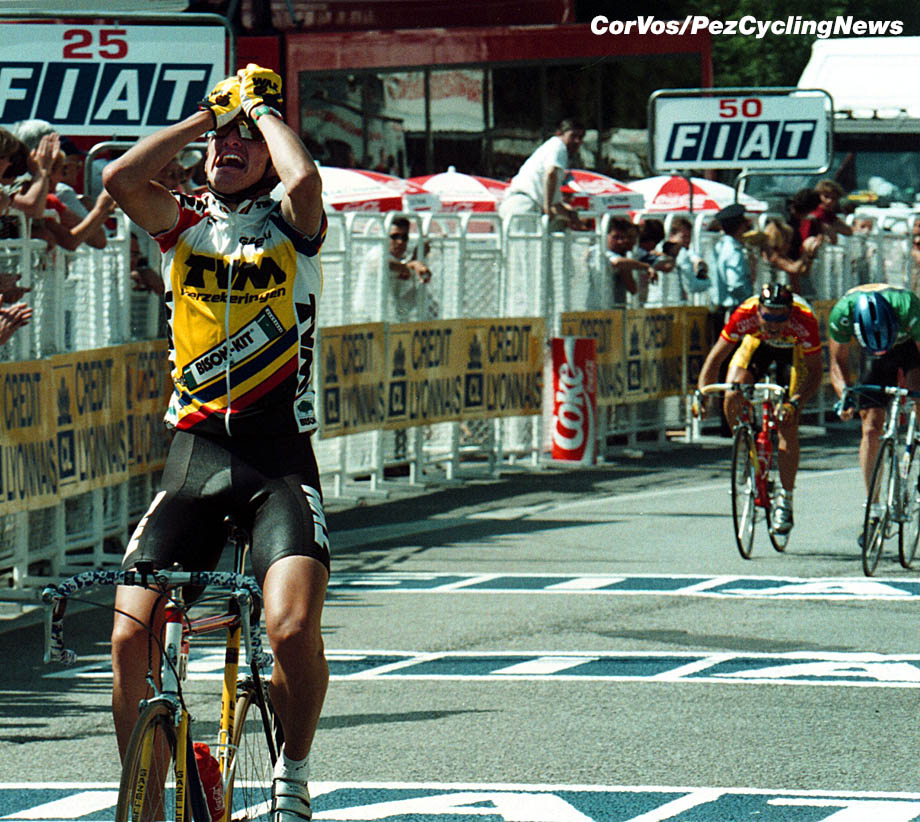 PEZ: Season ’93 was a roller coaster, a terrible crash in Tirreno then a Tour de France stage win.
I came down in a bunch sprint on Stage Five in Tirreno and fractured my skull. When I first got back on the bike I couldn’t keep up with 60 year-old cycle tourists – and in one race in Northern France I got dropped in the neutralised section. Priem came to me and said; ‘I don’t want you to go home, I’m going to put you in every race, the Tour de France is still two-and-a-half months away, don’t worry about results, just get back into shape.’ It was a very special win, Stage Five into Evreux, I was afraid to get involved in sprints after my crash so attacked with 1,000 metres to go and held on. Priem came up to me at the finish and said; ‘I told you!’ 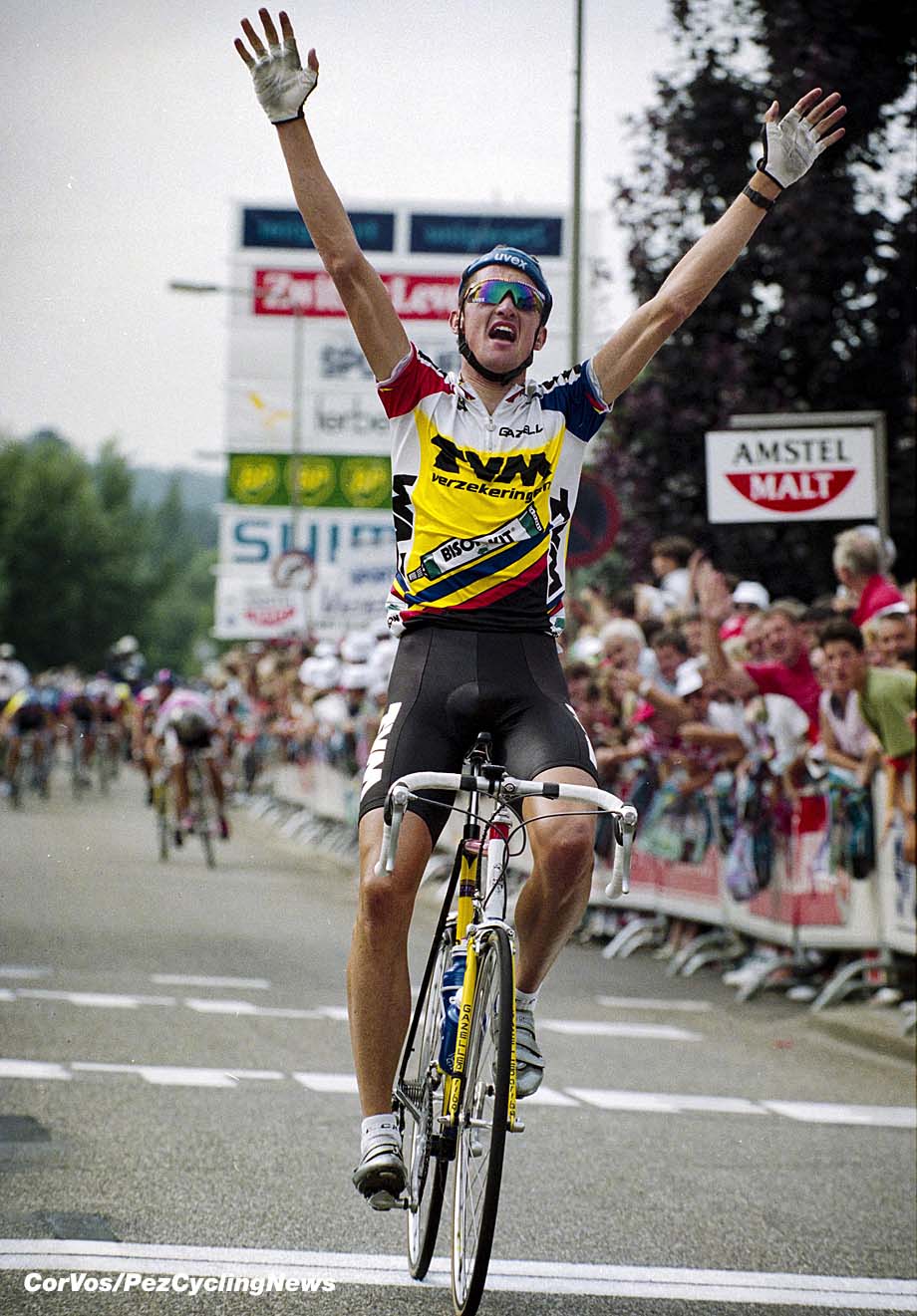 PEZ: You won the Tour of the Netherlands overall in ’94.
With it being a Dutch team that was a big result. The final day was in the ‘Dutch Alps’ and I was going for the stage win but I was building a nice lead; Abdoujaparov had the leader’s jersey but he had no Polti team mates to help him chase, I won the stage and gained enough time on him to win overall. 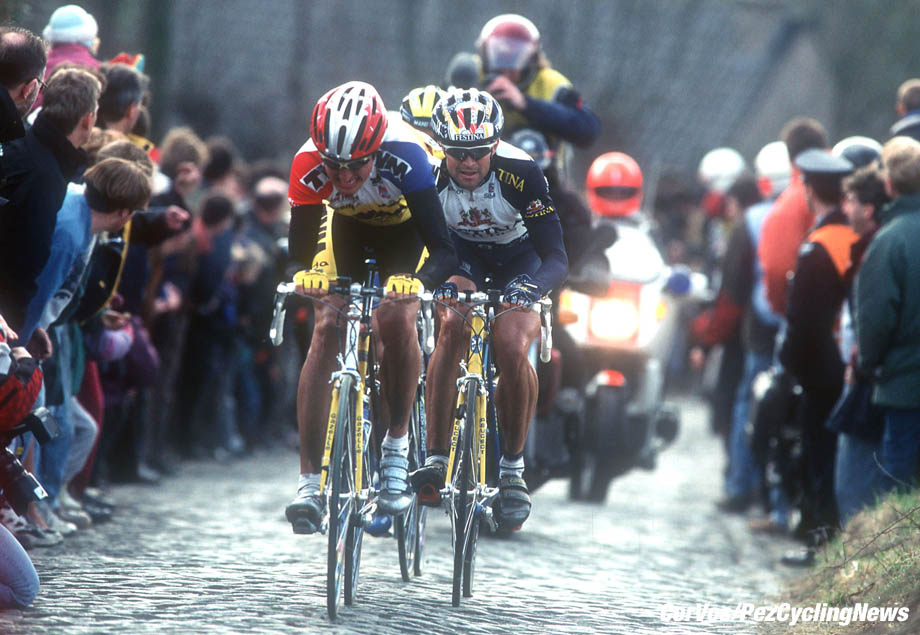 PEZ: Season ’95 was a strong one for you in the Classics; ninth to Sanremo, sixth in Flanders and fifth in the Amstel.
I won a Vuelta stage and two stages in the Tour of Denmark that year too, I was conscious that I need to get UCi points to qualify for the ’96 Olympic Road Race in Atlanta where I just missed going top 10. It was a good season and whilst I won Grand Tour stages, I never won a Classic – that was something I always wanted to do, ‘close but no cigar!’ 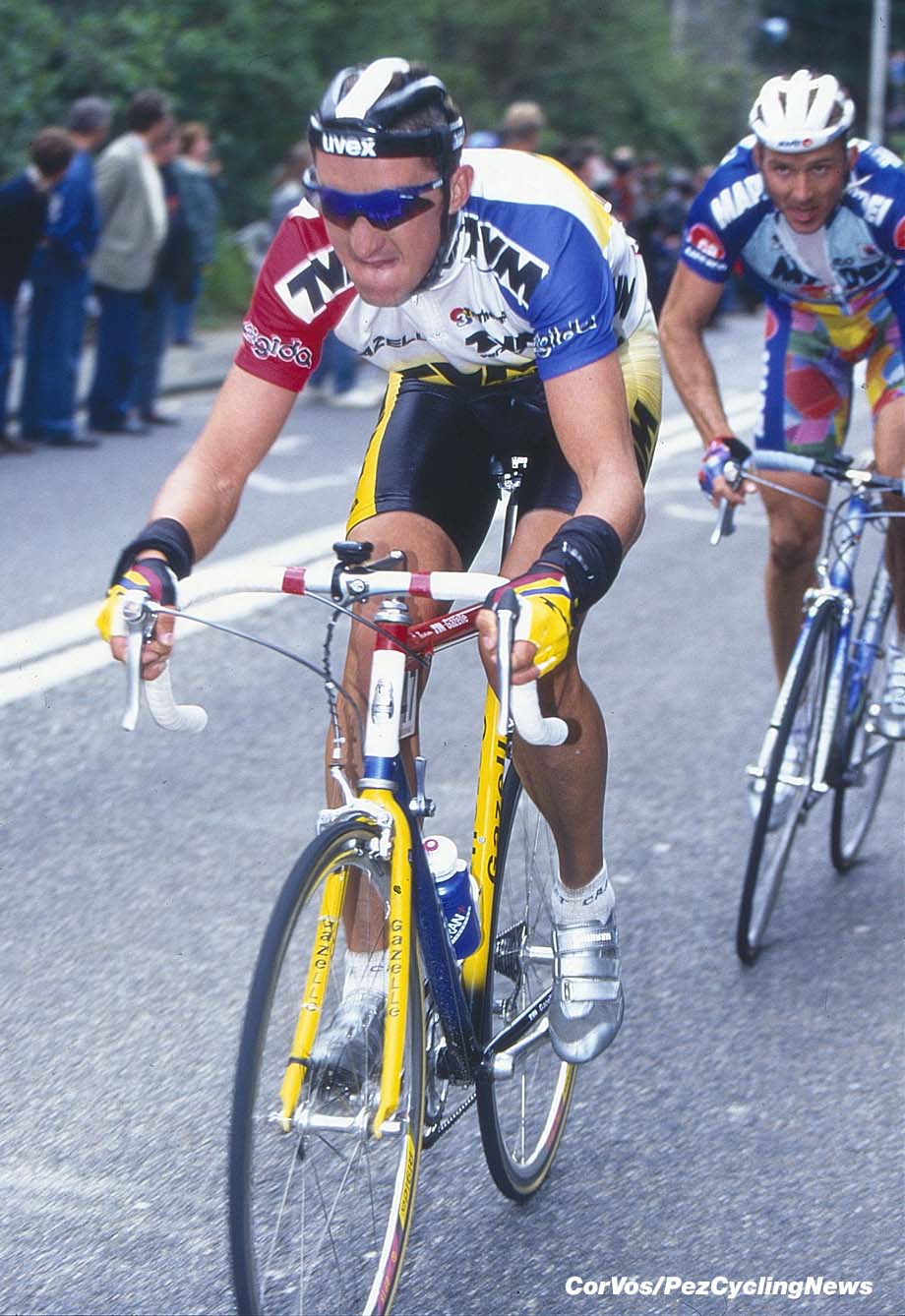 PEZ: Team Home – Jack & Jones for ’98.
Bjarne Riis, Rolf Sorensen, Brian Holm and I used to discuss how good it would be if there was a Danish team which we could all ride for; and here it was – Brian and I joined it. But maybe it wasn’t my best ever decision and if you were to ask me about things I would do differently then I would say this was one thing I do regret. I should have stayed with TVM for one, maybe two years more then quit, I was still well up the hierarchy within the squad. I’m sure you’ll have spoken to other riders who have moved from a big team down to a smaller one – it’s hard. And when I look back, my last years in the sport, I was burned out. 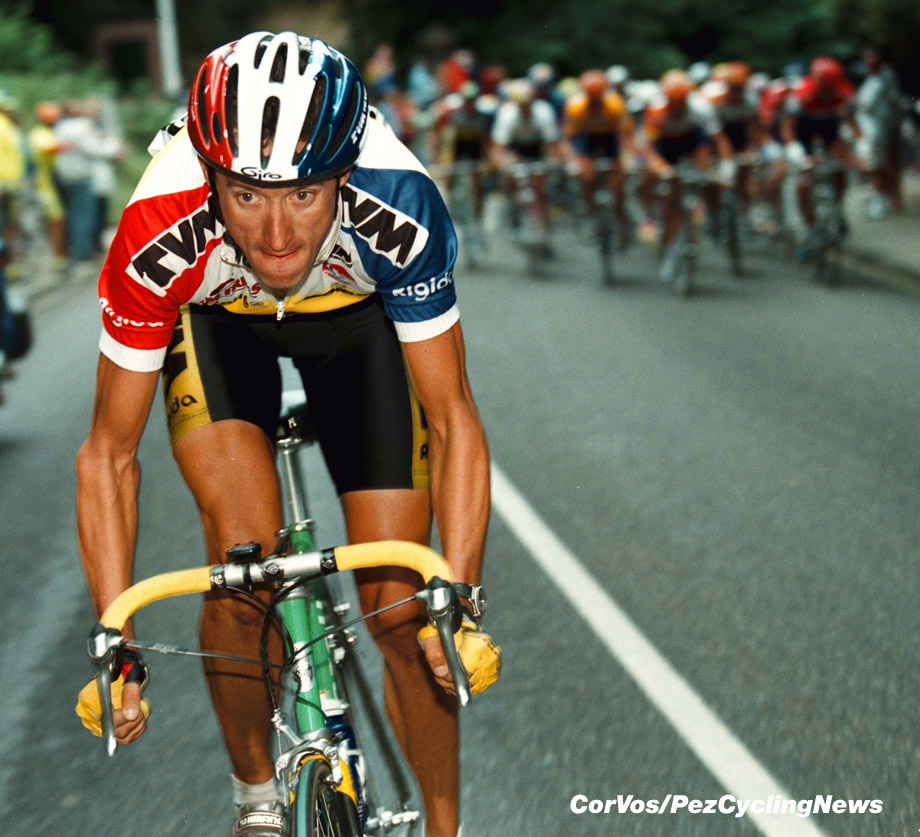 PEZ: But you were still getting good results, second in the ’99 GP Merckx time trial and top 10 in the 2000 Brabantse Pijl.
The GP Merckx was team time trial format that year, I rode with the Belgian guy Marc Streel, he was very strong – the Dutchmen Wauters and Dekker won but we beat Boardman and Voigt into third place. I did get some decent finishes like that one in the Brabantse Pijl but I wasn’t getting the results I was used to. My body wasn’t on the same level; in 2000 Memory Card – Jack & Jones got into the Tour de France, I asked if I could miss it; ‘are you crazy, it’s the first time a Danish team has been awarded a place?’ the team said to me. But I was burned out. 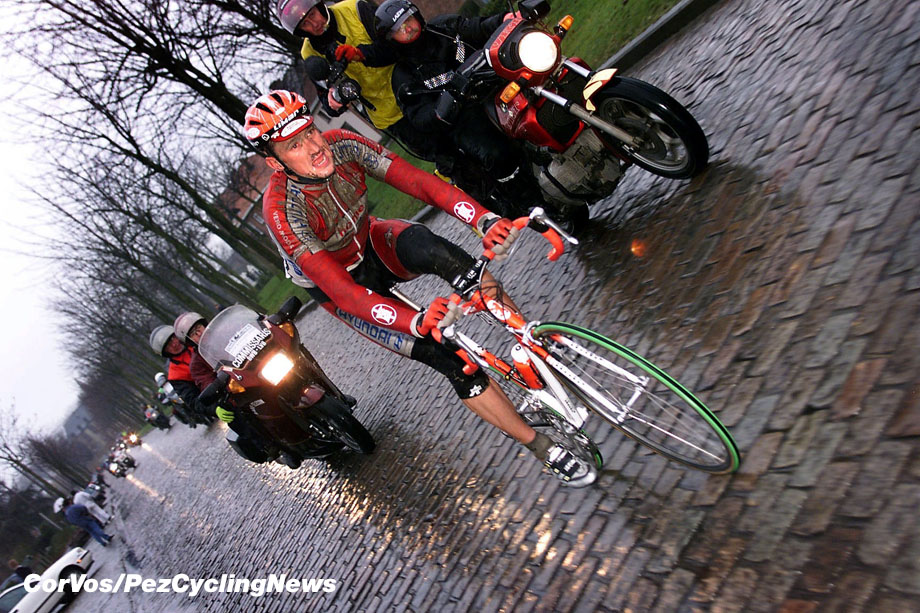 PEZ: How did you handle retirement?
It’s no secret, I found it hard, when you stop riding you lose your identity, I wasn’t prepared for that. And you know, just like in the ‘real’ world when someone leaves a job, you say; ‘we’ll keep in touch and see you soon,’ but no one ever does. I missed my team mates and felt a bit like I was standing in the desert and didn’t know whether to turn left or right. I started going to discos, Thursday, Friday and Saturday nights, I was drinking and not watching what I was eating. I was piling on weight and did have a drink problem. 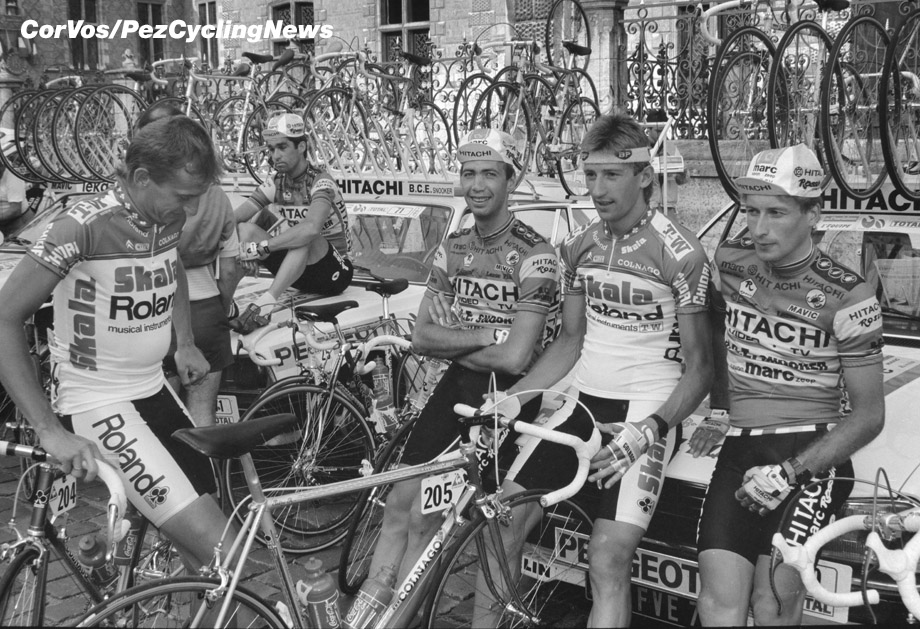 Friends at a Tour’87 stage start

But I’m a lucky man, I have friends who are successful business men, they said to me; ‘you have a good personality and you’re good at selling,’ and I became involved with the hospitality industry, I’ve been with the FC Copenhagen soccer team in a PR role for 20 years now. When you are a pro rider you’re in ‘bubble’ you have no ideas how to handle ‘real’ life. I don’t know all the answers now but I know that if I ask the question then one of my friends will have the answer. Life is good for me now. I’m in DPCC, the danskeprofesionellecyclistersclub, along with Bjarne Riis, Brian Holm, Rolf Sorensen – the World Road race Champion, Mads Pedersen is a member too. We old pros are all a lot calmer and now, if we have a problem we sit down and discuss it – and we don’t leave the table until the problem is solved. I think a lot of people could learn from our philosophy . . . 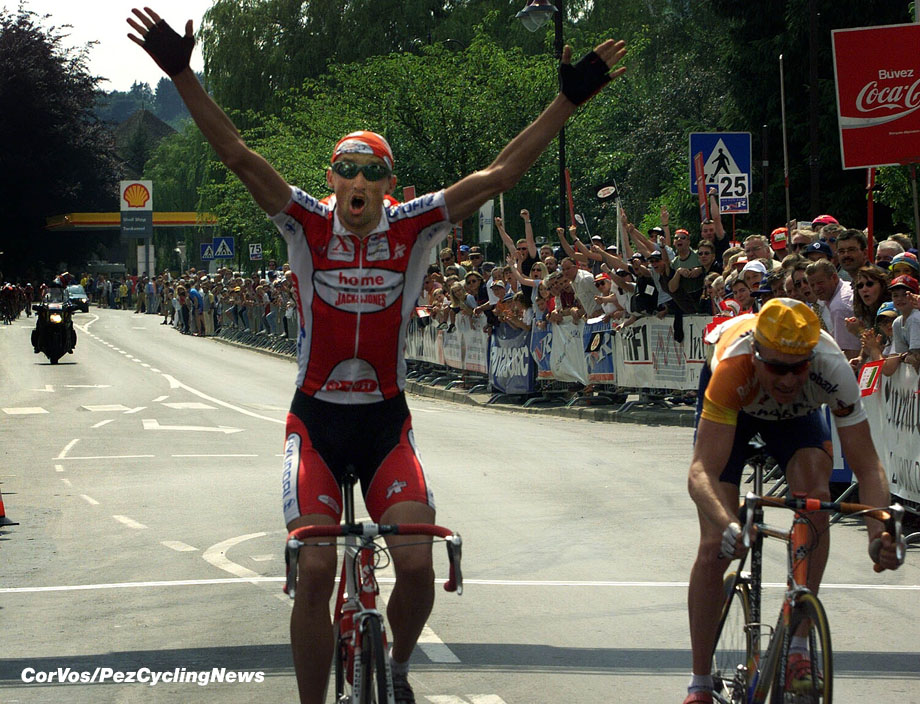