It’s not often you see a sprinter’s leadout man battling with gc leaders in the high mountains, but that’s just what Dario Cioni did at last year’s Giro d’Italia – eventually taking 4th overall. In today’s second part of our PEZ-Clusive interview, we talk big Tours, and high hemocratic levels, with a rider on the way up.

THE BIG TOURS
PEZ: This past Giro, you were instrumental in several of the final mountain stages. In fact, it certainly looks like if it weren’t for you, Cunego would have had a hard time hanging onto the Maglia Rosa without attacking Simoni himself. What was it like being such an instrumental player in the most political grand tour of the year? How were you able to recover from your days as a lead out man on the flats early on, and still have enough gas left to keep up with, and beat, the big guns of the race?

Dario: I have already done something like four Vueltas, three Giros and a Tour, and I had always performed well in the third week, so I was pretty confident that I could do well. I was simply trying to gain as much time as possible, thinking basically for my own GC standing. In those last two mountain stages I went from 8th to 4th, which was a big improvement. And I knew that Cunego would be able to stick to my wheel without actually having to attack, but I had nothing to do with any of the politicking. It was a different story from mine. 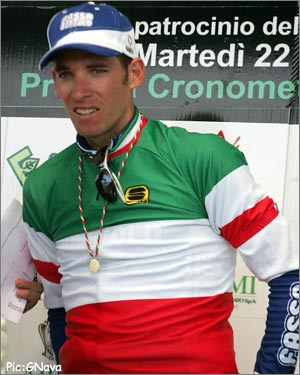 Dario earned the rights to the Italian tricolor jersey by winning the national TT title on’04.

PEZ. Now you have ridden two grand tours in a year on a couple of occasions. How difficult do you find that, and what do you think your prospects are for you two grand tours this year?

Dario: I’ve twice done a Giro-Vuelta combo, and once Giro-Tour. A Giro-Tour double is more difficult because they are much closer together. And the Giro-Vuelta is, I wouldn’t say easy, but perhaps just a little more comfortable. I sort of specialize in stage races because I’m pretty strong, and because I can mentally handle the pressure and the concentration that is required for racing 20 or 21 days straight. For me, I’ve always had good times and experience. We’ll have to see how it goes this year, but I want to do well in the Giro, and then see how we fare for the Tour.

PEZ: In addition to doing well in the Giro, will you have any other goals in 2005?

Dario: Well, looking at the calendar, the Giro and the Tour, those races are big enough to really dominate your whole season. Inside the Giro, I certainly have smaller goals. There is a stage that goes by my house near Florence, that I would really like to do well in. And of course, trying to get the pink jersey is another big goal. I would also like to improve in the GC from last year, but that won’t be easy because this coming Giro will probably have an even tougher field to race against. The quality of racers will be even greater, so, we’ll have to see.

After the Tour, I will decide what I will do next. Probably I will want to call it a season, but I may still try for the World Championships. Maybe the time trial. I would really like to do well there, especially after what happened this past year. 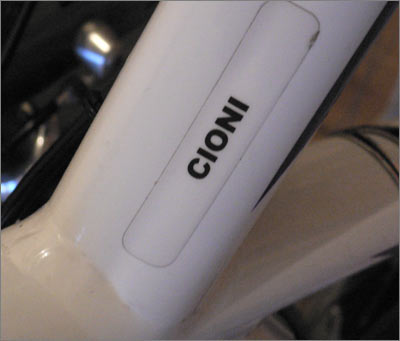 THELOWDOWN ON THE NATURAL HIGH
PEZ: You were kept off the Italian team for Worlds because of a high hematocrit level, which was subsequently proved to be natural. How did you feel in those few weeks when you were waiting to be exonerated?

Dario: Well, it was terrible because I had really worked hard to get ready for the Worlds. Because I had already had a full season with the Giro and the Vuelta, I could have just called it a season after the Vuelta, but I wanted to ride well for Worlds, and so trained really hard, and largely used the Vuelta to be ready for Worlds. And then to have been kept off the team for something that I didn’t even do. I felt really disappointed, especially since I knew I had done nothing; I hadn’t cheated.

I believe that the people I know, my friends and family and team mates believed me, but then I was all over the Italian news and news papers, and for a very bad reason, very bad news. A few weeks later, when I was cleared of any wrong-doing, and received certification for my naturally high hematocrit levels, the sports newspapers were quite good about writing about it, but for the general newspapers, there really was no coverage about my being okayed. And that keeps you wondering about, you know, that guy you read about with the doping issue. Especially when I know I have done nothing, and only ever tried to be an honest and successful rider, it makes it hard to be accused like that.

You know, the 50 hematocrit level rule is alright for some people, but not for everyone. And every year some people, who should have nothing to fear, get “caught”, and publicised as possible dopers, only for it later to come out that they were clean, but just with a naturally high level. So people are wrongfully being punished, or even just temporarily doubted, because the rule is too general, and doesn’t take into account that not every racer is the same. But still you have to be tested as “positive” before you can prove that you are naturally high.

PEZ: I read where you tried on a few occasions in years past to bring this issue of your naturally high hematocrit level to the attention of the UCI, and were told they couldn’t give you a certificate for it.

Dario: Yeah, they said it wasn’t consistent enough to certify. I said, “well, okay, I am quite close to the limit, and have on occasion gone over”. But it had never gone over during competitions; a couple of times I had been very very close, and I had tested over out of competition. But that wasn’t good enough for the UCI, until I tested over at Worlds, and had to get all the documentation to prove my innocence.

PEZ: Geez, that’s tough when they won’t let somebody clear himself before he’s stuck with a positive that can be naturally explained.

Dario: Really. Maybe the worst thing is when they say, “okay, we know you’re probably not guilty but we’ll have to keep you off the team”, and people can remember you as that guy who maybe was cheating.

PEZ: Well, we’ll really be looking forward to seeing you improve upon your fantastic placings in the coming months. PEZ will certainly be down at the Giro for a bit, so I hope that we can snag a few minutes with you after some stages.

Dario: Sure, I hope so. I’ll be looking forward to it.

And thanks again to Dario for taking the time to talk with us.

Soon you can check out Dario’s new and improved web site at www.dariocioni.com

Read Part 1 of the PEZCycling Interview with Dario Cioni.