Dario’s Diario #3: From Tirreno To Coppi

Time goes by very fast. The last time I was writing I was in an airport coming back from the team presentation, today I am in an hotel room, waiting to go home, after today I was a DNS in the 4th stage of Coppi and Bartali. I hate retiring from races, but today’s decision was an investment the future, as we are only ten days away from Pais Vasco, a very important race for the team and my preparation for the Giro.

As I am not feeling 100% healthy, a small cold and sore throat and a rainy and cold stage was awaiting me, we decided to take no risks and call it a day. I have two extra days to recover and I do not want to get a real cold and have to stay a few days off the bike. 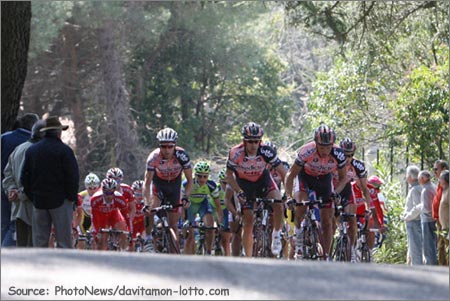 McEwen’s surprise stage win at Tirreno was a hilite.

Recently I have done a lot of racing, Tirreno- Adriatico and San Remo shortly before the Coppi and Bartali race. This makes 12 stages in 16 days so I assume I have had enough intensity lately. I must say they have been very positive on the results point of view, as we won the team time trial in the Coppi and Bartali, and we are well placed in GC, and Robbie McEwen won one stage in Tirreno and got 4th in Milano San Remo.

Know Your Leaders
These races have been very useful to me as I have started to get to know the team leaders better, especially I have a much better understanding on how Robbie rides. I will have to make a few adjustments to my style, as he is very different to the sprinters I have worked together with in the previous years, he does not need to be at the front all time, but he prefers to be in the right spot at the right time, not waste energy before.

I really made a great move in Tirreno, when he won the first stage, with a non sprint… he managed to surprise everyone with an early move, before an S bend, and the only thing the other sprinters could see of Robbie, was his back in the last 200 meters. They knew they were racing for second!

My First SanRemo
Robbie is riding really well and in San Remo the whole team was riding just for him. It was a very difficult day, as the race is 300Km long, the speed was crazy from the first kms and everyone was attacking. We had chosen to wait, and make no effort for the first 100Kms and we acted according to the plan. But we had a nasty surprise, as we crested over the Turchino and down in Genova, it started raining, and it was not just wet, it was freezing cold… the team needed about 20Km to get all the clothing we needed on, as the speed did not drop and the peleton was single file.

But this was not the only bad surprise, as eventually it stopped raining but there were some wet stretches of road, and there it felt like riding on ice. Needless to say, there were many crashes and in the biggest one, nearly all the team went down. We got back to the peleton and then we were just waiting to get to the bottom of the Poggio. My light turned off at this point, as I had no more energy left, and could only wait to get to the end and get the results. Robbie finished 4th but was not lucky in the sprint. He was just a few centimeters away from the podium.

This was my first San Remo, and maybe the last. I can understand the race is special, but you must also be a bit crazy to win this race. 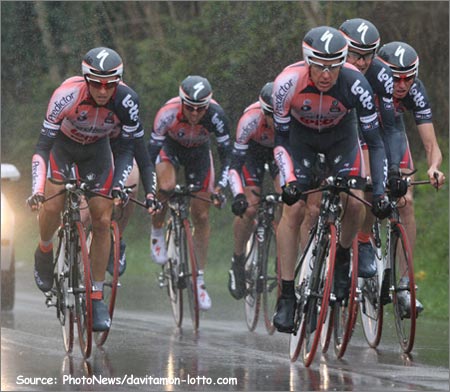 Racing to the TTT win at Coppi & Bartali.

But anyway, everything changed after the start, as we got in to our aero position and started riding as fast as we could. Usually everyone is afraid to be the weak link in the time trial, but I must say everyone road really good, especially Cadel and Summy. The gave good and strong pulls. I was surprised to hear we had the best time, but our average was over 51Kmh in the rain, and that is fast!

He had to wait for 10 teams to finish before we could celebrate, but no one really came close to our time, so it was podium time… not bad, after two years with no wins, this is the 2nd in 50 days… I hope I can hold this winning rate, it would be very nice…