Dario Cioni, our inside-man with Liquigas didn’t finish the Swiss tour, but he was happy to talk to Pez on Sunday night on Ulle’s Swiss win, Tour predictions, and hopes for the Italian national TT Champs this week…

Pez: What was the reason for your Suisse DNF, Dario?
Dario: I was very tired, three of us from Liquigas rode the Giro and in Switzerland – me, Charly Wegelius and Franco Pellizotti – none of us finished. I think this shows that it’s not just how I feel, the last week of the Giro was very hard. The heat in Switzerland was a big factor too, when you are tired the heat affects you even more: it was 35 degrees in the valleys and even for the descents it wasn’t necessary to pick-up a cape it was hot even up at 2,000
metres. 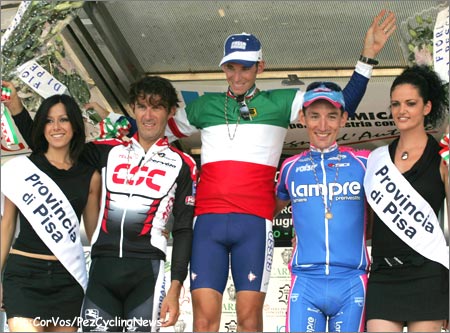 Dario won the Italian National TT Champs in ’04 – and will be back again tomorrow for another go.

Pez: Is that you into a rest phase now?
Dario: I have just one more race before I get to relax, the Italian time trial championship on Tuesday. That was another reason I didn’t finish in Suisse, I said to my manager that if I finished I would do nothing, but if I pulled-out early then I might be able to do something in the time trial championship. I will not be riding the road race championship on Sunday though, the course is not for me and it is a long way from my home.

Pez: What’s the plan after the TT?
Dario: I will have seven or ten days with no bike at all, than I will start to build back up again. My first race will be a stage race in China which starts on July 15, it is at altitude so we will be treating it as training. After that I have the Tour of Germany, the Vuelta and Worlds.

Pez: You were right with your prediction about Jan Ulrich.
Dario: It wasn’t hard to predict, the difference in him is incredible from the Tour of Romandie, he is so lean, especially on his upper body. I still think that he will win the Tour de France.

Pez: Apart from Jan, who is looking good for the Tour?
Dario: Ivan Basso and Cadel Evans will be there: I am not sure with Landis, maybe he was too strong too early. Vinokourov has either hidden himself well or is behind, I’m not sure which but you can never write him off, he is the kind of rider who is not frightened to go in a break from a long way out, if that works you can pull back a lot of time.

Pez: Your team mate Michael Albasini rode well in Switzerland.
Dario: He is Swiss and is always motivated to do well at home, his morale was very good and he took both the sprints, which he won last year, and the Mountains. He is a rider who is very good at the long breakaway.

Pez: How do you think Stefano Garzelli will do at the Tour.
Dario: He is not thinking so much about the overall now as much as winning stages, he has a good sprint if he gets into a break.

Pez: Finally – what about the World Cup?
Dario: I am not a huge fan but I saw the Italy v USA game, it was not a good game for Italy, remember I support England too, so I hope they do well.

I had forgotten that his mother is English – Dario supporting England? I thought that dude was perfect too!

We’ll let you know how he does against that stop watch on Tuesday and catch-up with him again later in the season.