Since we last heard from Predictor-Lotto pro Dario Cioni last month, things took a decided turn for the good at the Volta a Andalucia (Ruta del Sol), where he scored a stage victory and second overall. Dario recounts the race for us…

Here I am in Eindhoven waiting for my flight to Pisa, after yesterday’s team presentation in Sanct Nikolas (Belgium). It feels like airports inspire me, while writing my diaries, as I often end up writing an article waiting for a plane. But then, I think it is a good way to kill time while waiting for a flight and this happens quite often.

Today I do not need to do much thinking, about the diary’s subject: my first victory of the 2007 season and my first result with my new Predictor-Lotto jersey.

To me it was a pleasent surprise, as it happened in the first stage of the Ruta de Sol in Spain. I had only ridden one race before, il GP Costa degli Etruschi in Italy, a sprinter’s race, close to my house, and now I was in Spain ready to race my first real race. I felt ok, had good training during the Winter, had good feelings during the training runs and was happy to be racing with my new pink jersey. I do not know what you think about the new Predictor-Lotto team outfit, but it is very popular in Italy, and also Spain, and quite a few friends have old me it is the nicest jersey in the peleton! I agree with them and am very happy to be wearing this outfit. 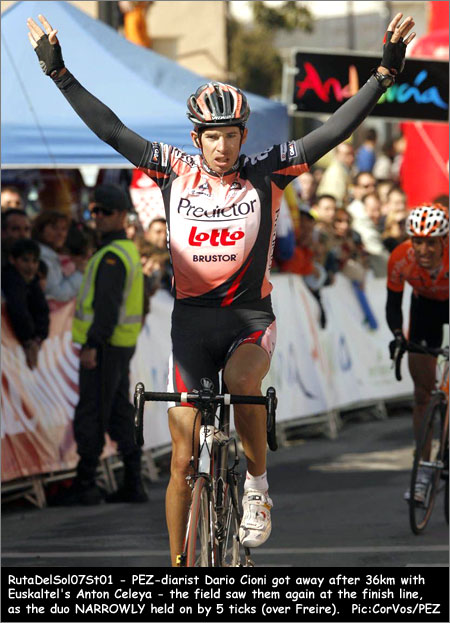 So here we are, at the start of the first stage, difficult in the first kms and then easier in the final, and during the team meeting our plan is to get in the breaks, as Robbie (McEwen) had just got back from Australia and was still getting used to the European Winter. If we arrive in a sprint, we will try to lead him out.

The race start is fast and furious with attacks from the gun, as always in Spain. The result of a slightly uphill road, with side wind, is that a group of 15 -20 riders gets clear from the group. And I am in this group.

The main group is chasing behind a few seconds back. Then we hit the first climb and I get clear with 4 riders. After the KoM there is a difficult descent and I bridge up to a solo rider. When I catch him, we agree to ride together up to the 2nd KoM and see what happens. We go over the top with 1 minute on the group, after 35km and 125 to go.

We find a strong head wind but are happy to take turns and power on. Behind the group stops and our advantage increases ….up to 8 minutes at the feed zone….when the group starts chasing. At this point we start riding faster and we manage to keep the peleton over 5 minutes away for many kms. With 25Km to go I start to think it is possible to make it, as we still had a good advantage. At this point I also start to be afraid of my break companion as I know nothing about him.

When taking turns I feel stronger but I am not a sprinter and would like to win a stage… after all it is nearly 2 years from my last win.

As I get closer to the line I realize we might make it, and take comfort the finish comes after a 1.2Km climb. The finish line is getting closer and closer, like the chasing peleton. 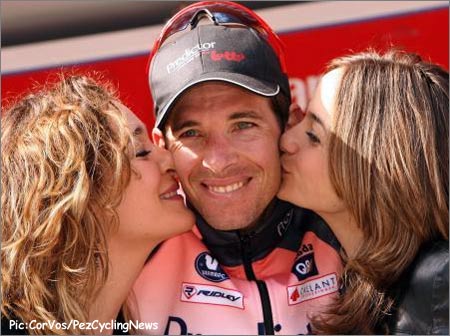 Dario enjoys the moment. This is what winning bike races is all about…

Here we go, under the last km sign, but the group is still at a reasonable distance, we can make it, now I must think about the other rider. 300Meters to go I try to accelerate and I see I get a small gap, so I go for it and yes… I made it, I have won the first stage with just 5” over the group. Not much but enough.

Well if you want to know how it ended, I lost the GC to Oscar Freire in the last stage for just 1 second. I feel sorry about this, as the team and myself had done a lot of work to defend the leadership, but then I have lost to a three time World Champion, an incredible rider.

At the end I must be happy about the stage win and the 2nd overall in GC.