If you want the real low-down on pro bike racing and in particular who’s gonna win Le Tour, then ask a pro bike rider. Italian Liquigas pro, Dario Cioni gave us his insights all through the Giro: currently he’s in action in a rather unruly Tour de Suisse and he took time-out after stage five to talk to Ed Hood.

Pez: Did you have a good rest after the Giro Dario?
Dario: Too little a break, but I get a proper rest after this race. I am still tired from the Giro I think – the last week was really hard.

Pez: So, how is the form?
Dario: Like I said, I am tired: the stages here are long and fast. Also, the heat is causing a lot of problems, in the Giro I never wore my lightweight jersey once but here I have worn it every day. It’s strange, you don’t come to Switzerland and expect a heat-wave but it has been a real problem. 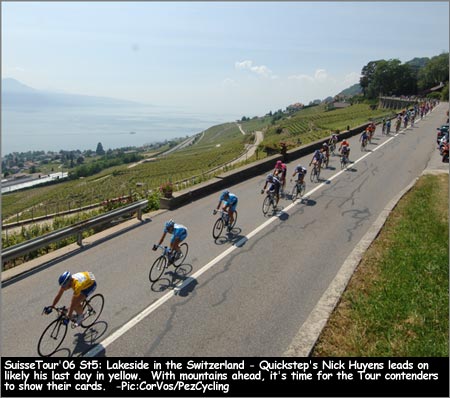 Pez: Looking at the results in Switzerland it seems like an unusual race,
breaks are staying away all over the place.
Dario: It’s because the GC leader’s teams are not exercising control, Boonen and Nuyens (both Belgium & Quickstep) knew they wouldn’t keep the jersey with the high mountains to come, so they did not put the team to work. If there is no control it goes crazy, everyone thinks that they can get in a break and the break might work so every one goes up the road, it has made it a very hard race.

Pez: Who has impressed you in the race so far?
Dario: Without doubt, Jan Ulrich (Germany & T-Mobile), this year I have
ridden with him in Romandie, the Giro and now here. He has lost weight, is very powerful and is getting better and better: it’s the best Jan Ulrich I have ever seen but Cadel Evans is riding well too.

Pez: I see Michael Albasini (Switzerland) is riding well for Liquigas.
Dario: He was sixth overall, but punctured at a bad time today, he’s leading the intermediate sprints and mountains. I think maybe the mountains will be difficult to keep but we will be working hard for him to keep the sprints jersey.
He has good morale and now that he has lost time and is not a threat on GC
he may get in a break. 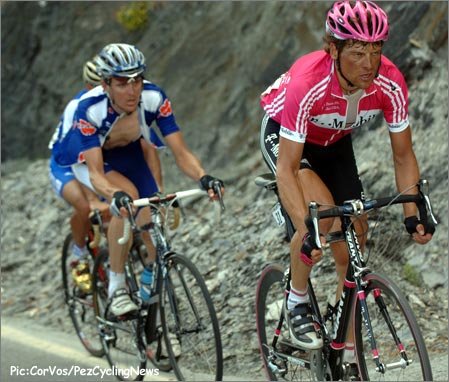 Pez: How is Danilo Di Luca doing?
Dario: As you know, he is not riding the Suisse: he is training for the Tour de France.

Pez: Who is your tip for overall victory here?
Dario: Jan, as long as he doesn’t lose too much time in the mountains –
but I don’t think he will and he is so powerful no one will beat him in the
time trial.

Pez: And you tip for Le Tour?
Dario: Jan.

We’ll be talking to Dario again after the last stage to see if his predictions of victory for The Kaiser‚ stack-up, but I have to tell you – I’m with Dario on his Tour tip!