Dario’s Diario: Into The Tour

Who best to ask about the Tour de France’s sojourns into England and Belgium? An Italian, of course! We connected with Predictor Lotto’s Dario Cioni after stage 2 last night to get the racer’s view on the action so far.

Pez: What are Predictor/Lotto’s goals for this Tour?
Dario: We’ve achieved one of them already; that was for Robbie McEwen to win a stage as early in the race as possible. The other is to take Cadel Evans into a good final position in the GC.

Pez: How do you interpretate the prologue result?
Dario: Cancellara was the big favourite, so his win was no surprise. Kloden and Vinokourov performed well, but the seconds won and lost in the prologue will mean nothing in the third week. Our only aim in the prologue was for Cadel to do a good ride and he achieved that. For the rest of us it was case of not crashing or losing too much time. 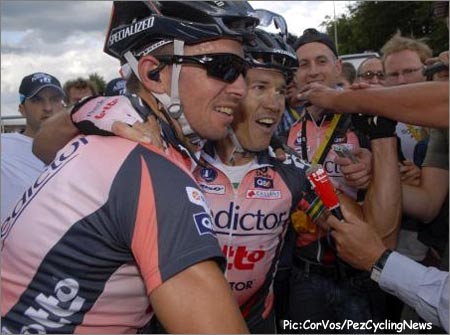 Darion and Robbie Mc celebrate an astounding win at stage 1.

Pez: The Tour in England – historic or just hassle with transfers?
Dario: Historic, definitely – it was great for British cycling; it’s a minority sport in Britain, but look at the amount of people who turned-out – It shows the potential the sport has. In London it wasn’t just tourists who were watching, it was local people; in every village too, the crowds were huge. The riders definitely saw it as a special experience.

Pez: When Robbie came-down on stage one, did you think that was the stage-win gone?
Dario: Robbie wasn’t actually in the crash, a rider rammed into him from behind, it was a secondary effect of the crash. I saw him very soon after it happened and things didn’t look good.

Pez: Tell us about the chase.
Dario: I didn’t come down in the crash but I had to take to the grass. Van Summeren was right beside Robbie so he was first on the scene, then me. We got Robbie back on his bike and started a chase immediately, then Van Severant and Aerts came back to us to help. We chased hard, but initially didn’t seem to be making any ground, we could see the cars but they weren’t getting any closer. As we caught and passed each car though, it was a boost for our morale and finally we got on to the tail of the bunch with around seven kilometres to go. Then, of course, we had to take Robbie up through the bunch. It was a good piece of work by us, I think.

Pez: What was Robbie saying at dinner?
Dario: He was saying that he still couldn’t believe he’d won. We had a little champagne, not too much, but we always celebrate a good ride, it’s nice, good for morale. 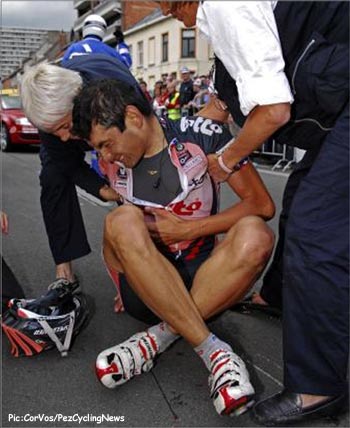 Freddy took it hard in the stage 2 pileup, but a few stitches and full-length arm wrap were enough to get him ready for stage 3.

Pez: Should T-Mobile have been better-organised with regard to Cavendish’s crash?
Dario: Close to the finish it’s difficult to organize a chase, sometimes the picture isn’t clear, it’s not that riders don’t want to go back and help, maybe they just don’t know. We always have two riders close to Robbie, this is so as they can help if anything happens and also they can radio the car so as the DS knows there is a problem.

Pez: Did Robbie use-up all his andrenalin in Canterbury, so there was none left for Ghent?
Dario: No, he was delayed in the crash and by the time he had got back to the front, the sprint was already developing and he’d used a lot of energy. Also, Steegmans was very strong in the finale at Ghent.