The days are long and transfers often seem longer – so it was late Monday when we finally got through to Predictor-Lotto’s Dario Cioni. He finished today’s first mountain stage with a small group at 4:51 down, and now sits 65th 1:28 back on GC.

Ed: Yeah, yeah, I know, but I’m not dealing well with reality, can’t I do the race reports?
Pez: I got that covered, Ed.
Why not do some interviews with riders?

Dario’s Race After Stage 9
Pez: How was today, Dario?
Dario: Everyone was happy that it wasn’t a tough stage, we were all quite wasted after the day before.

Pez: Napolitano; a surprise winner?
Dario: Not really, he would have won on Saturday on the circuit at Mugello if he hadn’t been boxed-in, he’s fast.

Pez: How’s Robbie?
Dario: He’s had one stage win, but it could have easily been three. There’s a lot of luck involved in sprinting and it hasn’t been going Robbie’s way. That stage that Forster won, if Robbie had kicked half-a-second earlier then he would have taken it. 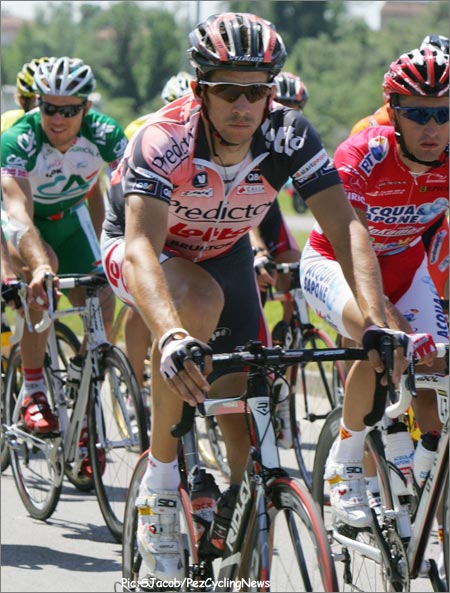 Pez: Does Predicto/Lotto still have a full team in the race?
Dario: Yes, we’ve been working for Robbie and doing a good job, I think.

Pez: Tinkoff have been burning-up a lot of gas.
Dario: Yes, they have had a great start to the Giro and gained a lot of TV publicity for the sponsor but I think when we enter the mountains they must be more calm. Today is the only day they have missed the break of the day. Their tactics must be based around breakaways because they have no sprinter or GC rider.

Pez: That was a good move you forced on Sunday, it took you up to 9th, didn’t it? Dario: Yes, I had to work hard to promote the break though; I was in four or five moves before we managed to get clear.

I’m 9th just now, but tomorrow (stage 10 to Santuario Nostra Signora Della Guardia) will see the GC change completely; it’s really the first mountain stage, long and with a tough finish. Montevergine wasn’t too hard at all. As I said to you in Sardinia, I’m just taking it one day at a time.

Pez: Simoni, Savoldelli and Cunego have all been pretty-much invisible so-far.
Dario: Yes, but that’s normal, the Giro is won in the third week and the big GC guys usually stay quiet until then.

Pez: Does the Giro pass close to home for you this year?
Dario: No, today was as close at it gets, about 100 kilometres, I saw a few faces I know but it’s not really home ground.

Pez: What about the Zoncolan?
Dario: As I said in my diary in PEZ, I have been to see it. But for me the stages to Briancon and Lavaredo are tougher. When you arrive at the bottom of the Zoncolan, it’s just like a mountain time trial, everybody rides-up, as best they can at eight or nine kph. On the other two days I mentioned there are several very hard climbs and it’s possible to lose a lot of time.

Let’s hope Dario isn’t losing that time – we’ll be talking to him again in a day or two.