Dario’s Diario – The Mountains Of Suffering

It’s been a torrid week for Dario; the mountains haven’t been kind to him and there’s only a small bit of relief in sight…after the Zoncolan – we spoke to him on the rest day, before he set out on the final arduous run into Milano over the Giro’s last six days.

PEZ: A tough time for you in the mountains, Dario?

Dario: My pre-Giro build-up didn’t go exactly as I would have liked, I was a little sick after Liege and didn’t ride Romandie so I’m down on base condition. I was going well in the first week but in the mountains that lack of condition caught-up with me.

PEZ: I’m guessing the transition stages 16 and 19 will be targets for you now?

Dario: Yes, I will be trying to do something in stage 19, before the time trial. If I don’t get with the move then I will try to put in a good time trial.

PEZ: How is morale within Predictor/Lotto?

Dario: It’s OK, the team target for this Giro was to win one stage; we did that right away, so the goal was achieved. The team put in a lot of big efforts for Robbie and with just a tiny bit of luck it could have been three stage wins.

PEZ: Was it pre-planned that he would retire on stage 12?

Dario: We knew that he wouldn’t be going all the way to Milano and once the race entered the mountains there was really only one more stage which suited him. The Tour is his big target and there is no point in him going through the mountains, it’s better to save his legs for France. 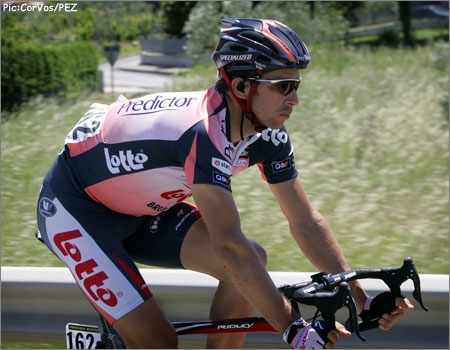 PEZ: Can Di Luca go all the way?

Dario: Yes, I think so; there are still some tough days to come but he has been very strong on the climbs so far. I think that the Zoncolan favours Danilo more than it does Mazzoleni.

PEZ: Mazzoleni has been a surprise.

Dario: Yes, we had thought that Savoldelli would be the challenger for Astana, but Mazzoleni is a strong, experienced rider.

PEZ: Who else has surprised you?

Dario: Andy Schleck, he’s so young and so close to the podium. It’s not really a surprise, but I’m very pleased for Marzio Bruseghin who won the mountain time trial. He’s a good friend and a good person – he deserved the win and he’ll be one of the riders in the frame for the final time trial.

PEZ: Is Simoni’s day past?

Dario: No, he’s still in line for a podium place – which isn’t so bad. He’s still a dangerous rider who’s not afraid to attack from a long way out.

PEZ: Will the decision be made on the Zoncolan or in the time trial?

Dario: The Zoncolan, if Danilo does not have a bad day there, I think he will win the Giro. I think Danilo will win from Mazzoleni, third is still very open between Schleck, Simoni and Cunego.

Pez: Given the scndals being revealed in the press, how are the crowds?

Dario: I think that they are bigger than usual. The TV figures are very high with 40% of all viewers watching the race when it is screened.

PEZ: Not a question I like to ask, but it can’t be ignored; what’s the feeling in the peloton about the EPO revelations in the media?

Dario: In the last year or two there have been many changes in the sport. It has not been a good past for cycling but it’s very different now. I’m not just saying this because It’s what I think people want to hear but because it’s true – it’s a new ball-game now. Everyone realises that things can never go back to how they were or the sport would simply wither and die.