Our man Dario Cioni signs in after a month of post-Tour recovery – which for a pro means lots of bike riding – but when the menu incldues several of the lucrative criteriums, the racing become a lot more fun …

The month that follows the Tour is quite strange for the riders. You find some that will try to maximise their condition, racing as much as possible. Others prefer to take it easy, relax after a month full of stress and take more time with the family and friends, and maybe race a couple of criteriums. 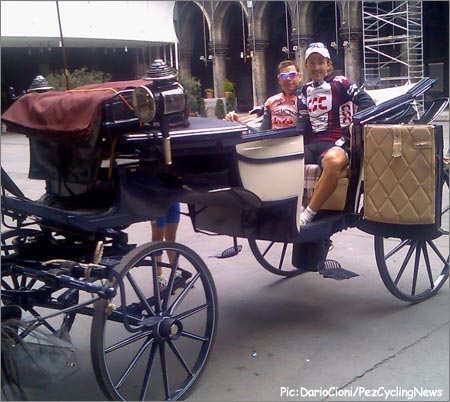 Cadel and Fabian arrive to a crit start in romantic style (no word yet if there’ll be a second date.)

Let’s make an example. During the month of August I raced 4 criteriums with Cadel. The first was in Wien, followed by two in France and ending with one in Holland.

I met Cadel at Malpensa Airport (Milan-Italy) and then we caught the same flight to Wien. By chance there was a flight leaving for Bilbao just 30 minutes before, going from the gate next to ours. Well, when we arrived at the airport we found the whole Lampre team (including Cunego, Ballan, Bruseghin and others) and they called us when they went towards the gate. When we answered that we were not flighing to Bilbao but to Wien for the criterium they were surprised, and well also jealous as a 50Km criterium is a different race from the Classica di San Sebastian. 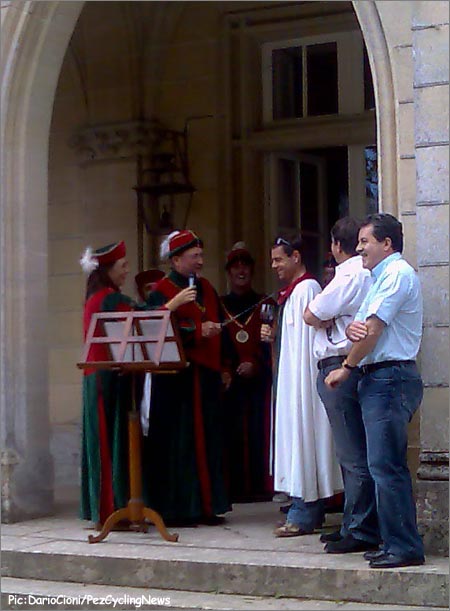 Certain riders receive special privileges at the post Tour crits, like being made an honourary knight. It helps if you’ve finished on the podium at Le Tour.

The Criteriums some positive features, the first being you just go to the start a few hours before the event, not the day before like a normal race. This would save us many days away from home in our racing career. The second is that the atmosphere is fantastic, with a huge amount of spectators and cycling fans. In Wien we rode around the course in a horse drawn cab, stopping at the finish to be presented. Cancellara won the criterium with Cadel finishing 3rd.

Dario’s own olives go into his own olive oil – see the link below to buy a bottle.

The next two crits were in France in the Bordeaux and Limousine regions. Here I was surprised by the amount of people that would come to the criterium, that were not organised in cities but in small villages in the middle of the country. Both courses were hard, including a 1km climb to be repeated 30 or 40 times. The last Criterium was in Holland, very similar to the French ones but with a flat course.

…Coming to a wine bottle near you.

My first official race was Hamburg, but nothing special.

On the private side of life, I have tried staying as long as possible with my wife at home. It was not too hot, and this is the best part of the year to live in my town, as no one is around, the traffic has drastically decreased which makes it very good to train on the road. The only mistake I made once was to ride up to San Gimignano on a Sunday. There the certainly was more traffic than usual…

On the agricultural side I have been checking my wines, as this is the first time I will make my own Chianti wine and things are going very well. We also had some rain after a very dry and sunny July, that has helped to grapes to develop well and get nice and big. Also the olives are growing, bigger and bigger. It is not the best year for quantity but quality should be very good as usual. I will start picking the olives immediately after Lombardy. Yes I am racing until the Tour of Lombardy, still some time to go…

BritTour07 Inside: Down But Not Out