We connected with Dario after Stage 16’s second day in the Spanish mountains – and even with Madrid finally in sight, the race was not out of the … mountains yet. Some of the hardest racing came early in the stages…

Pez: How do you feel after two days in the mountains?

Dario: Tired, yesterday we expected to be hard but today surprised us – it was very tough indeed.

Dario: Yes, it was a very hard start, I actually went with an early break but Discovery missed it and went full-gas to get it back because it would have cost them the team prize if it was allowed to go. When we were caught I needed a bit of an easing-up to recover but there was no slowing-down. It was crazy, flat-out after just 25 kilometres and it was like that for the whole stage, there were 60 riders in the gruppetto – that speaks for itself. I thought that Vinokourov would fight to make the podium but I didn’t envisage him trying so hard to get the jersey.

Dario: Yes, but like I said it was crazy and will be interesting to see what happens tomorrow, maybe Astana will continue to attack but the pressure is on Illes Balears now. 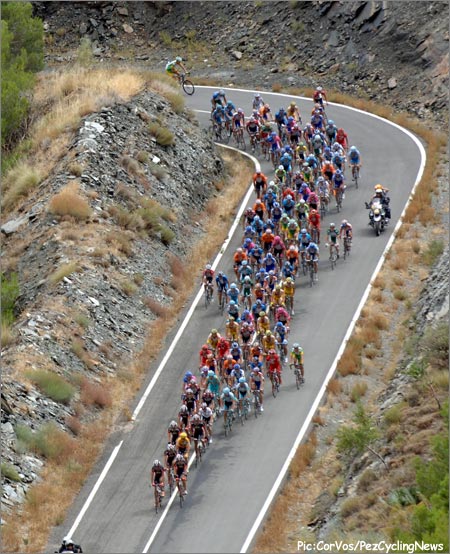 The incredible shrinking bunch begins the climb to the stage 16 summit finish.

Pez: It’s not over for Valverde though, is it?

Dario: No, but he must attack and try for the stage win tomorrow, the bonus for the win would put him back in the jersey. Vinokourov has been getting stronger as the race has gone on. In the time trial on Saturday I think Vino will go better than Valverde will, so it’s up to Valverde to go on the offensive tomorrow.

Dario:He was very tired today and lost a lot of time today. I don’t know if he’ll go to Madrid or not now, it will depend on how he feels when he wakes up tomorrow; he may decide to go home to rest for the Worlds, but if he decides to rest for Salzburg then he should go now.
[Ed Note: Di Luca retired from La Vuelta on Stage 18.]

Pez: You know Danielson from your Fassa days don’t you?

Dario: I roomed with him there, he was new to the team and with my speaking English it was my job to introduce him to the job. He’s a good rider, usually very consistent and today he must have been feeling very strong, he went with every move. I think his start to the race wasn’t the best; however he’s obviously ridden into good form. At this time of the year it’s often down to who can cope best with the fatigue of a long season.

Pez: You were in the gruppetto today.

Dario: It took quite a while for it to form today; the various groups had to catch each other. We had to ride pretty hard it was no easy day we were 12 minutes down at the foot of the last climb so we took that steady then rode very fast on the descent.

Pez: How was the rest day on Monday?

Dario: It’s just a distant memory now – it seems such a long time ago. We can see Madrid on the horizon though and tomorrow is the last major day, although Friday may turn out to be harder than we all think – there are no mountains but it’s up and down all day.

Dario: Yes, he arranged with the team to do just two weeks so as he could prepare for the World Championships. He won a stage and had several top ten placings so he had a good race. He’s won medals in the Worlds in the past, a bronze in the elite and silver in the under-23.

Pez: Does the team have any more goals for the race?

Dario: We’re all a bit tired now and the team is depleted but if the right break goes and we can get with then you never know what can happen.

Pez: You must be looking forward to a rest?

Dario: Yes, it’s been a long season but I have nearly two weeks to recover because the weekend after the Vuelta is the Worlds, so if you are not selected it means you can rest.

After that I have Zurich and a couple of other races, but it’s not so bad at the end of the season because there are race every few days this means you don’t have to actually train too much – just race and recover.

Pez will be keeping in touch with Dario right to the end in Madrid on Sunday.

• Check out Dario’s fresh new website at CioniDario.com, see his team at TeamLiquigas.it