It’s all over; Basso has proved the doubters wrong, big Jan has given us all food for thought, there are broken dreams lying all over Italy – and Dario? He’s on the motorway heading home, but he still had time to talk to that pesky Scottish dude.

Dario: ‘Very hard, I decided not to try and follow the lead group and rode with the grupetto, the pace was OK for me and I was with them for 100 kilometres, at this stage there is no point in wasting energy.’

PEZ: “And what about today’s final stage?”

Dario: ‘Usually a final stage is tranquilo until the circuits, but CSC rode hard most of the way (Ed. thank Missaglia for that), right through until the last lap, we were lapping at 50 kilometres per hour at the finish which is very fast on a course like that. 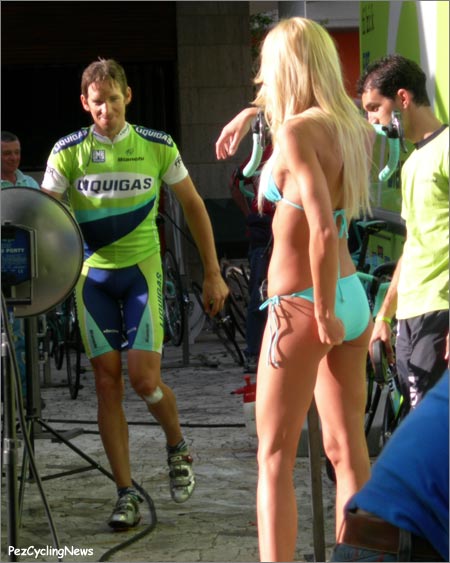 I was with Franco Pellizotti and we were lined-out, so whilst it was fast, it was safe because there was no fighting for position, I was pleased because I felt comfortable during the closing stages. I think Basso just wanted to stay out of trouble, but CSC were very strong.’

PEZ: “Can you sum-up Liquigas’ Giro?”

Dario: ‘We did not meet expectations, maybe these were too high before the race and we did have a lot of bad luck with crashes. Danilo was not the same Danilo as last year, but on the other hand we had a good stage win with Pellizotti and Wegelius was one of the surprises of the Giro – he rode very well.’

PEZ: “And what about Dario’s Giro?”

Dario: ‘I am not happy with it, I did not meet my expectations; I have always ridden well in the Giro and I prepared well this year, but there is nothing you can do about bad luck. The crashes affected me badly, before the Giro I had not had a crash for a year then I had two heavy falls within a week. I was happy with my time trial, but I never really felt like myself after the crashes.’ 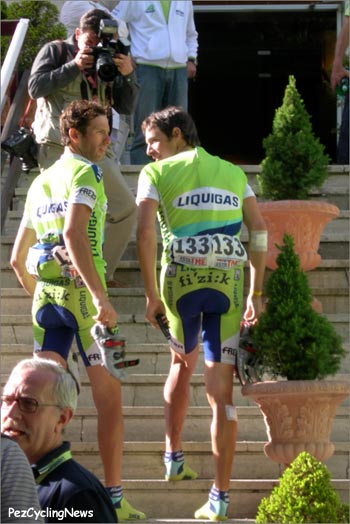 One more climb to go (into the hotel), and Andrea Noe and Dario try to determine if the bikini girl is real or a mirage.

PEZ: “So what were your best and worst moments?”

Dario: ‘The best was my ride in the time trial and my worst were all the mountain stages, of the five Giros I have ridden I rate this my worst performance.’

PEZ: “Have you lost much weight in the race?”

Dario: ‘If you have prepared properly you should be skinny at the start and not have much weight to lose, I have lost maybe a kilo.’

PEZ: “Is there a big celebration tonight?”

Dario: ‘Liquigas held a small buffet to say “goodbye” to all the team personnel who were on the race but we all want to get home now and I am on the motorway already (7.30 pm); I have been away from home for 45 of the last 50 days.’ 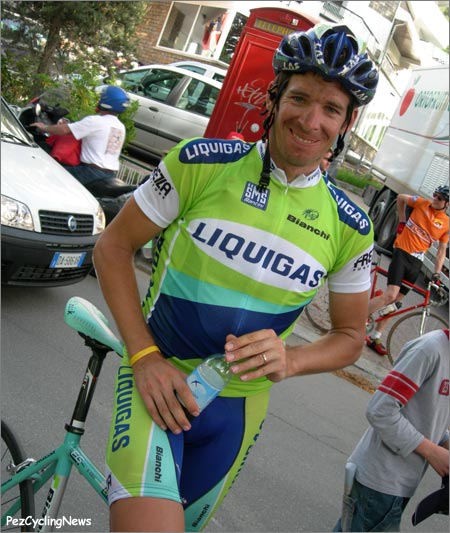 Even after 7+ brutal hours on the bike, Dario manages a smile for PEZ.

PEZ: “Will you be resting now for a few days?”

Dario: ‘Yes, but I will still ride my bike a little tomorrow and the next day, it is not good to just stop riding, you must wind-down into your rest period; if you just stop your body wonders what is going on and reacts badly.’

PEZ: “What is your next race?”

Dario: ‘It’s the Tour de Suisse in about 12 days time and we’ll see how I have recovered from the Giro…then it’s the National Championships and I’ll start thinking about the second part of the season.’

PEZ: “No Tour then, so what are your goals for the rest of the season?”

Dario: ‘No, I have taken a lot out of my body with the Giro and the Tour would be too much; I hope to ride the Vuelta and I want to gain selection for the World Championships.’

It just remained for me to thank Dario for taking the time to talk to me – no matter how bad a day it had been he always listened carefully and gave me insightful answers; I hope you enjoyed his words as much as I did.

Only problem is – I’ll have to get used to not saying to my buddies; “When I was chatting to Dario Cioni today . . .

Be Your Own Coach I: The Basics