The countdown to the February 18th opening of the Tour of California is on and Team CSC is assembling in NorCal for three weeks of training. American time trial stud Dave Zabriskie talked to PEZ about his chances at this year’s ToCA, and how last year’s all-out effort may have hurt him later in the season.

PEZ caught up with Dave Z at a San Fran fundraiser for the Breakaway from Cancer Initiative (breakawayfromcancer.com). The guy with the world’s most perfect TT position rode a trainer inside a San Fran bank, and the sponsors kicked in bucks for every mile covered. Zabriskie is known for his Sphinx-like exterior, but he seemed to open up quite a bit this day. He even clowned around a bit on the trainer before we sat down and talked about the upcoming season. 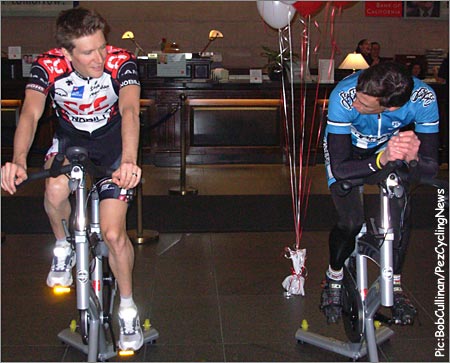 Dave and Bob chat while raising money for the Breakaway from Cancer Initiative.

PEZ: As you go into the Tour of California this year, do you go in with the conscious effort to win the overall, or is there another team strategy, or is it too early to even say?

Dave Z: It’s a little early. I don’t think I’m going into it with the form I had last year. I’m taking a bit easier, just trying to focus on the length of the season instead of one race in February. But obviously we’ll bring one of the strongest teams to the race, so we should do well.

PEZ: You ended up second last year. Was that a surprise to you, or was that part of your plan?

Dave Z: I wanted to win…that was my plan.

PEZ: Did you pay for it later in the season, because you might have gone too hard too early?

Dave Z: I think I did, a little. I think I was paying for it at the end of the race itself. I think the strongest month I had last year was January, so I’ve made a conscious effort not to do as much this year. 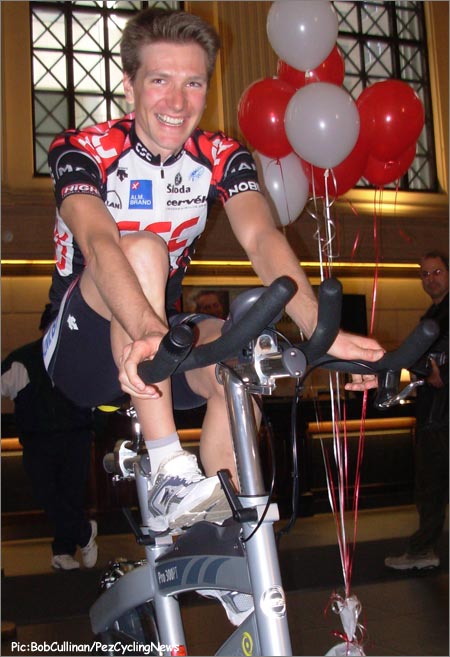 PEZ: What have you done differently this year?

Dave Z: More cross training. Definitely not as much mileage. Last year, I’d go out and do four or five hours a day, consecutively, until I got tired. Then I’d do a few easy days. There’s definitely more structure this year.

PEZ: Is that your plan, or is that a plan that Bjarne (CSC team manager Bjarie Riis) put you on?

Dave Z: It’s basically mine. You kinda have to be responsible for yourself.

PEZ: Because you say you don’t have the form this year, and you said your best form last year was January, are you working toward a different peak later in the season? A peak in May, or a peak in July?

Dave Z: I don’t really know when peaks come like that. I’m not sure you can really plan it out. There’s so much racing, and travel, and everything else. I just think that if I can take it a little bit easier, I can maybe be stronger throughout the rest of the season.

PEZ: Is there any event that you see, in the first half of the year, that you particularly want to be strong in? Do you want to do Paris-Nice, or the Dauphine…anything leading up to the Grand Tours?

Dave Z: I’m doing Paris-Nice, but I don’t know how that will be for me.

PEZ: Do you want to be part of the CSC Tour de France team?

Dave Z: Yeah, that would be nice. Obviously, that’s what everyone cares about. I might go the Giro again. But it’s always political. The Tour is like, at the meeting they say, “OK, if you’re good, if you’re ready, you can go.” Oh, alright. So if they’re not going to think about it until a week before the Tour, then I’m not going to either.

PEZ: With out Basso, CSC is obviously a different team. Do you see a clear leader out there?

Dave Z: I think Carlos (Sastre) proved to be capable last year. I think he’ll be our guy. 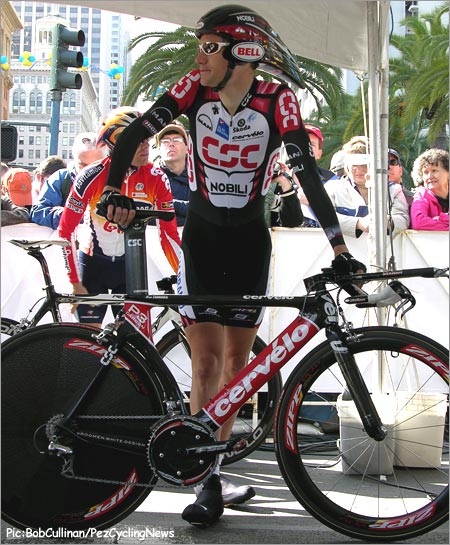 Lining up for the 2006 Tour of California prologue.

PEZ: Who is the CSC GC guy for the Tour of California?

Dave Z: It’s a team where anybody could do it. Bobby Julich, Christian Vande Velde, Fabian Cancellara…me! And it’s the same for Discovery. They’ve got Ivan, George Hincapie, Levi Leipheimer. It makes the race actually quite hard. Damn…someone goes up the road, and one of us who’s not equally as good as him, we have to dig in. It can really make the race hard.

PEZ: As the Tour of California shapes up, do you look at each stage and say, “Here’s where we are…here’s who’s strong this day…here’s who we want to put up front.” Or will that be a decision that happens even before the race starts, when you decide, “We’re going to support this guy”?

PEZ: What do you remember from the prologue TT in San Francisco last year?

Dave Z: I felt very good. Unfortunately, I dropped my chain when I took the first left-hand turn, but I still got top ten that day. It’s a pretty straight-forward prologue. I think would have won last year if I hadn’t dropped my chain. I took that left turn, the chain slipped and I almost had to unclip. It got back on at the last second.

PEZ: The first stage goes from Sausalito to Santa Rosa. The hill profile looks like a real bitch to us, but a pro rider told me that’s it’s basically a flat day for you guys. Is that a flat day?

Dave Z: Well, flat is flat, obviously. It’s not like a mountain day, that’s for sure. A mountain day is like 15 or 16 thousand feet of climbing…that’s a lot.