Despite the fact that he is still banned from competition until just before the start of the Tour de France, Britain’s David Millar is still very much a professional cyclist. We caught up with the Scot at the team’s first training camp of the season in Spain, and talked about his suspension, his return, and lots more…

Having been recently signed by the yellow clad Spanish ProTour team of Saunier Duval-Prodir, the former TdF yellow jersey is continuing his preparation for the French Grand Tour which will see his comeback. After leaving his home in Biarritz to re-establish himself in the rural Peak District in England, he’s found life to his liking, perfect for logging the long miles fr his return. 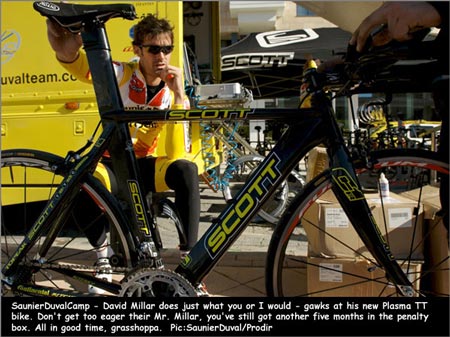 Parlez vous Espanol?
Having ridden for a French team for his entire professional career. David has made the move to a Spanish team with a distinct international flavour. What are his impressions of the new set-up? “Its completely different, it’s clichй but its chilled and relaxed, really effective, its effortless professionalism. For me it’s the perfect environment. You don’t get baby-sat, they trust us”.

Making Motivation
Its not very often that a cyclist aims to prepare for a race such as the Tour de France without racing, it takes the modern notion of more training, less racing to the extreme. I was interested to find out how David is staying motivated without the immediate demands of constant competition. “It’s different than it’s had to be in the past, it was a constant pressure of racing, I’ve spent the last six months planning and I’ve got myself into a mindset now of being able to train and train and train.” In the past, David had a reputation for being fond of racing but less so of training. What changed? “It’s harder to do big training blocks when you’re racing, you’re so tired mentally” he said. “I can see now when we used to race and people would say ‘how do amateurs go out on their bikes every day’, It’s actually easier than I thought it would be.”

So what does this preparation look like? “I have a structured programme leading me up to the Tour. It’s blocks of training. Kilometres for the next couple of months then mountains then time trial work.” After the transient lifestyle of a pro cyclist, will the former French resident be abiding en Angleterre until July? “My pied а terre is going to be near Manchester, in the Peak District. Then I’ll switch between Spain for little training camps and also go with the team and train whilst their racing, just to break it up really. The only problem with the Peak District is the weather, it can be unpredictable and also you need a good group of Pros to train with for the level and the distance.” “I’ve been living in England just over a year now, it’s nice, I’m really loving it. I didn’t think I’d say that after living in France, in England everything is so much more simple. There’s a much more pragmatic way of going about things. When all the chips are down I’ll always go back to the UK. When I lost everything, that’s where I went back to regroup. I don’t have to modify my personality too much to fit in, where as in France you have to become French. I want to live abroad again just for my cycling to ride with other pros, that’s imperative. I think I’ll be back over here [in Spain] next year. I’m using this year to “scout it out.” 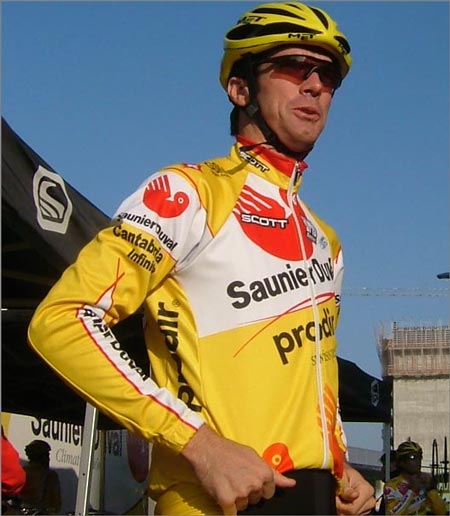 The Comeback
After admitting to using EPO, Millar was sanctioned by the governing body of British Cycling for two years. However, the performance director of British Cycling David Brailsford has publicly supported him not ruling out that he may represent GB in the future. What does this mean for David? “Outside of British Cycling, he [Brailsford] was a personal friend before everything. That friendship comes first. Obviously, he’s had to distance himself professionally but that’s completely normal. As soon as I’m back, I’ve paid my price and as long as they [British Cycling] stick to their guns, they’ll support me. That’s good to know.”

Speaking of friends, there’s nothing like hard times to sort the wheat from the chaff. What was David’s experience of this? “Actually, every single one of my friends stuck by me and if anything, I found more people supported me; especially in France, people who wouldn’t have come up and said hello came up and expressed their support. I really didn’t expect that. I don’t think one person has come up and given me sh*t. They generally save that for letters. My friends and family have been enormous‚ through it all.”

I learned that David had been working with a University in Britain, specifically as a subject at Cardiff University for a Phd study. “It was all on a King-cycle [stationary bike for power measurement]. It was hard, really hard. I came out of it shattered. It was good for me because it was in that kind of dead period in October and November and it was a dilemma as to how we would tackle it. I was basically a guinea pig.”

This was a far cry from the Millar of old who had been reported to shun heart rate monitors and power meters in favour of a traditional approach based on “feel”. But how accurate was this portrayal? “They raced me so much when I was a young pro that ‘dd never get more than 10 days without racing. You can’t do structured training. Cycling has changed a bit now. Training is becoming more important. I’ve got a lot more respect for it now. I’ve had to with the situation I’ve got myself into, it’s all I can do now. I do believe that if you do it all properly, you can win the biggest races without drugs.” 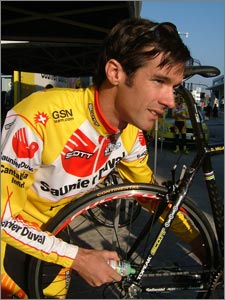 Even the pros get to oil their own chains… sometimes.

So what does it take to win clean? “You need the engine, you need the workload, the right trainer and be able to pick your goals properly. As you get older you get better at doing it, increasing the workload. Guys with the bigger engines have to train harder so you have to have the head to do it. For me it’s taken until I’m a bit older to be able to absorb that workload week in week out. It’s going through those days that you’re shattered when it’s hard.”

Before his ban, David was making more regular appearances on the track. I asked him whether a return to the boards and no brakes was on the cards. “I’d like to, just for fun, maybe World Cups, I’d like to do the Team Pursuit, its such a cool event. I want to just enjoy it when I go back. Maybe do some track races in the winter and see what happens. I’d like to do the hour record as well and get more and more time on the boards to get the technique down. We’ve got such a great facility [at Manchester].” I posed the question as to whether he had been tempted to make a early return to racing by donning a crafty disguise, perhaps a beard or moustache. “No, the problem is that everybody would spot me a mile off! I’d have to change my position and everything!” 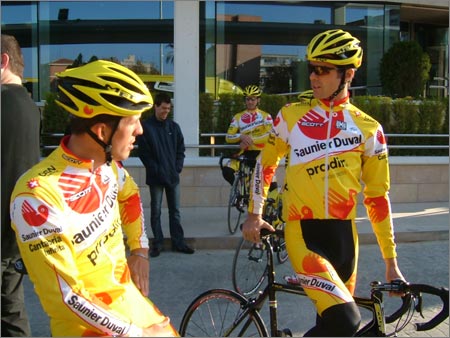 Millar advises Aaron Olsen on proper use of the Queen’s English.

Do As I Say – Not As I Do
David was, and is an inspiration to many young cyclists as an example of someone who made the move to the continent at a young age and progressed to have successful professional career. After his conviction leading to ban from the sport, what is his advice to young riders aspiring to pro careers and how can they avoid the pitfalls he fell into? “F*@^in‚ don’t take drugs, that’s number one, you don’t need to. You can win the biggest races without drugs. I’ve done it. It’s just greed and that brief period of my life when my morals were a bit left field (if you like) that made me do it. Secondly, it’s to understand the amount of work it’s going to take. If you’ve got a big engine and you’re super talented you’re going to have to work so hard. It doesn’t come easy even for the best of these guys. There’s a lot of suffering and a lot of time by yourself. From that first year amateur, the first four years are hard, your friends are going to be at university, you’re not going to be partying, you’re not going to be drinking, you’re going to be lonely but once a month you’re going to have a day in a race where it makes it worth while and stick at it because once you get through that then you can come out of it and its all worthwhile.” 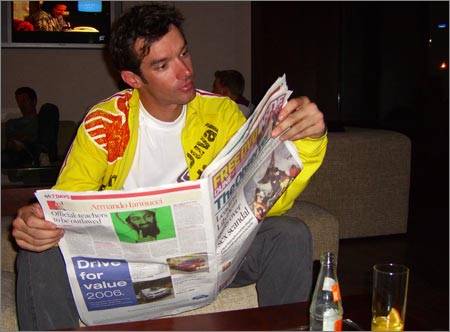 Nothing like a little reading to pass the down time.

We’ve established that the life of a full-time rider can be hard, so what techniques does David employ to ease the tedium? “You need some Boredom Evasion Tools.” and what is on the top of the list? “My girlfriend, ha, ha!” he said only half joking. “When I was in France I used to read a lot and listen to music.”

And what is floating his musical boat at the moment? “I just love electro, for three or four years I’ve been into it. Music’s such a good way of wallowing in whatever emotion you’ve got at the time. I love Underworld, they’re probably my favourite. Everything Everything [album title]…watch the DVD, 20 years from now if you want to see what Dance culture was in the 90’s, watch this DVD.”

Besides basking in multimedia electro experiences, what else did Dave get up to in his amateur days in France? “I used to go to the supermarket every day at five or six o’clock and eat a chocolate baguette. Great days!”

The PEZ SPEED Round
I thanked David for his time and we concluded the interview but not before a round of quick fire questions:

Keep an eye out for Millar this July because I have a feeling that we could well see him sporting another kind of yellow jersey.

LeTour 07: London’s Grand Depart “A Stroll in the Parks”!