We recently talked with American racing pioneer Davis Phinney, and the interview quickly became a fascinating discussion of many topics. A superb sprinter – we asked Davis about the evolution of sprinting, how it’s changed from his day. With the Tour going “full fast forward” – Davis’ thoughts on the subject make this is a great read…

We begin our series of chats with Davis as this great racer remembers some of his own victories and adventures, as part of the first successful American team to join the Euro-bunch – 7-Eleven. Davis did some amazing things for American cycling – winning stages almost 20 years ago in the Tour de France, and many other Euro races.

Our full interview will appear in several parts here on PEZ.

We interrupt this interview for this Special Announcement:
WIN A SEROTTA OTTROTT Dream Bike – AND HELP FIND A CURE FOR PARKINSON’S DISEASE Only 500 tickets will be sold, for $100 each. Draw date is July 31, 2004
Click here to visit the Davis Phinney Foundation and get your ticket:

We now return you to our regularly scheduled entertainment…

THE EVOLUTION OF SPRINTING – 1984 VERSUS 2004
Randall: You were arguably the best sprinter of your time when you were actively racing. Please give us your perspective on how things have changed. Now you have Cipollini and Petacchi sitting on these highly polished lead-out trains and they’re doing the last 150m on their own. My recollection is that sprinting wasn’t always that way and used to be more mano a mano.

Davis: I agree with your analysis that sprinting has changed. Cipollini ushered in the era of a team that was organized around a sprinter.

When I was racing in the Tour there was a very good sprinter named Jean Paul van Poppel who won 12 stages and the green jersey. If there was a breakaway on a flat stage his team would roll 4 or 5 guys to the front and try to pull it back together for the finish. 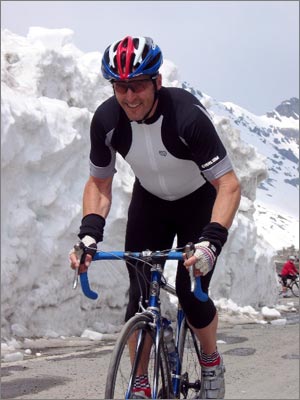 But the evolution of the train as you see it today was a Cipollini thing where you had a team that was dedicated to really, really punching it for the last 5-10 km. You didn’t have to do anything but sit on the wheel and not be in the scrum for 5th – 10th place in the last km. When Cipollini had Giovanni Lombardi leading him into the last 200m he was unbeatable.

I think Petacchi learned well from that. Petacchi was one of the guys that used to fight for Cipo’s wheel. Petacchi quickly realized he wasn’t like McEwen. He didn’t thrive off the bouncing and booming and jarring and the pseudo fisticuffs that go on behind the guy who has the best train. It wasn’t until he got his own train together that he started to excel and win.

When you watch the Petacchi train work to perfection and you watch his last lead-out guy pull off – then Petacchi actually accelerates and he jumps. Often times whoever ends up on his wheel, whether its McEwen or whoever, they lose ground sitting in his draft because his jump is so powerful.

That’s where you really see that clearly Petacchi is the best. He can accelerate off a wheel that’s already going 68kph and take it up to 72kph. Nobody else can do that. McEwen is the only guy who doesn’t get dropped off Petacchi’s wheel when Petacchi jumps. Even McEwen can’t make up any ground as soon as he comes out into the wind – he’s just stuck.

As Davis describes the sprint I find myself recalling the few times I went over 70kph on a bike and they were all downhill. Davis continues to enthrall me with his sprinting clinic – university was never like this…

CRANK IT UP TO “11”
Davis: A lot of what has changed with the conditioning and the athleticism of the sport is having that 11 has necessitated that the sprinters are that much stronger, and the sprints are that much faster.

I would love to have had an 11 because I was a power sprinter and had big muscular arms. Over here I always ran out of gear – a 53X12 just wasn’t enough gear. But I didn’t want to lug around a 55 chain ring and be over-geared the whole day to hopefully not run out of gear in the last 200m. I would have been better served to have the 11 based on my style of sprinting.

And then you see Freddy Rodriquez – he’s the only guy who actually beat Petacchi in the Giro this year. The stage that McEwen won, Petacchi got boxed in on his lead-out and didn’t even sprint, so that didn’t really count. Freddy jumped Petacchi’s train early. He had an enormous gear – a 54X11 or something, and you could see him pulling on that gear for all it was worth. He made a good move and that’s basically the only way to beat Petacchi at the moment.

It’s fun – there are a lot of good sprinters and I think that unlike the Tour of Italy there will be quite a few more really solid sprinters in the Tour de France.

In the Tour de France, just by the nature of the race, it’s much more difficult to control. A team like Fasso could not do tempo all day and control the race because the pace is that much higher and there are more teams trying to disrupt the rhythm of the race of a team like Fasso that is trying to roll it in every day. The guys would be totally blasted after a few days of trying to control the Tour because the pace is that much higher and it’s harder to keep the race together.

WIN A SEROTTA OTTROTT Dream Bike – AND HELP FIND A CURE FOR PARKINSON’S DISEASE Only 500 tickets will be sold, for $100 each. Draw date is July 31, 2004
Click here to visit the Davis Phinney Foundation and get your ticket: