Tour Rider Interview: Mark Cavendish won his thirty-third Tour de France stage on Tuesday, the man who shepherded him to the finish line was Michael Mørkøv. Ed Hood caught up with the fast Dane on Monday’s rest day to hear about history in the making. 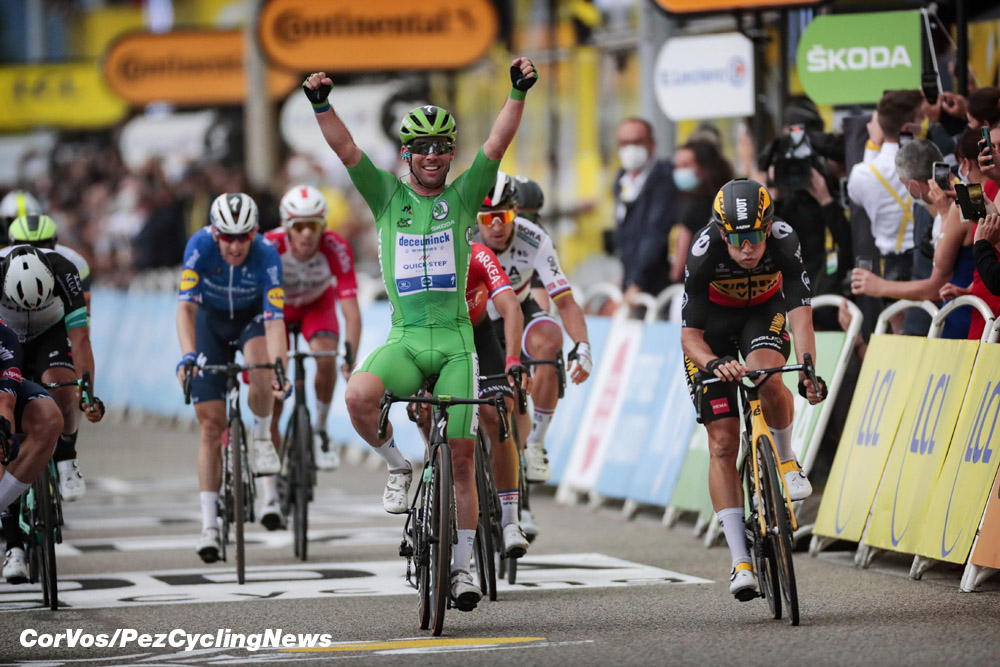 Tour stage win No.33 for Cavendish – Michael Mørkøv was the last ‘pilot fish’

By the time you read this it might be out of date again, I spoke to that stick of, ‘Danish Dynamite’ [copyright six day speakers across Europe] on the Monday rest day and was going to introduce him as the man who ‘pilot fished,’ ‘The Missile’ from the island where the cats have no tails to a double Tour de France stage win. But then on Tuesday he rendered that obsolete as Deceuninck and Michael Mørkøv lead Mark Cavendish to a remarkable third stage win within a week, taking him to 33 Tour de France stage wins, just one short of Eddy Merckx’s record – not to mention Deceuninck’s total for season 2021 to 36 UCi victories.

We kicked off by asking Michael, on a rainy rest day, how many Grand Tours he has ridden?
Michael Mørkøv: Actually, I passed a milestone two days ago it was my 100th Tour de France stage; in all I’ve ridden six Tours, four Vueltas and three Giros. 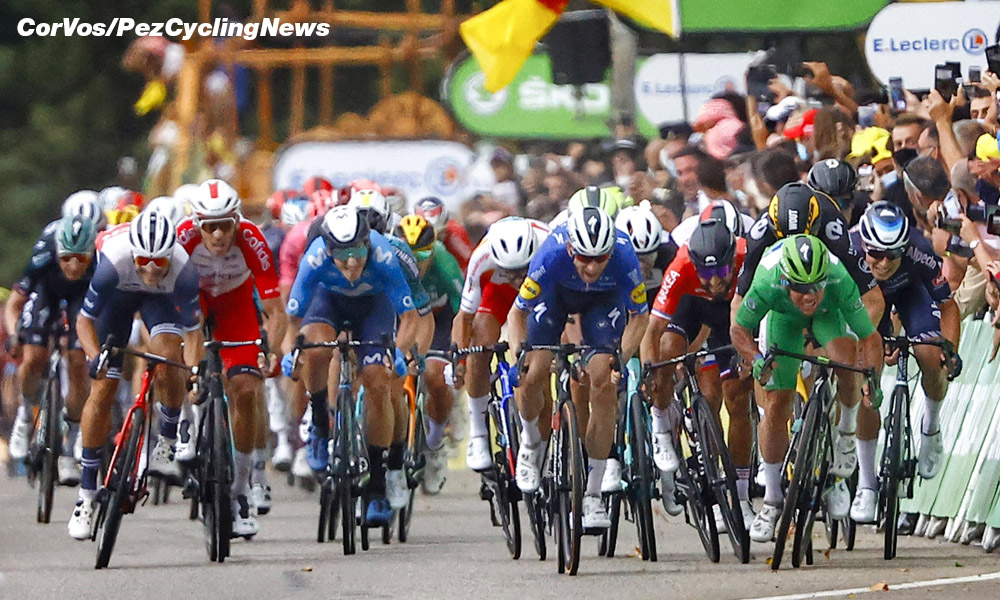 Mørkøv leading out on Tour stage 10

PEZ: And you recently re-signed with Deceuninck until 2023, that must bring you great satisfaction?
Absolutely, it was a very proud moment. What was also flattering was that I’ve had interest from other teams who wanted me to come and do my job for them; but as soon as I spoke to Patrick Lefevere he made me an offer which I couldn’t refuse and I’m very proud to continue with such a great team.

PEZ: What were your expectations going into the Tour with Mark rather than Sam Bennett as your sprinter?
Our expectations were lower given that last year Sam won two stages and took the green jersey. Mark’s call up was late when Sam had to pull out with his knee injury but we did believe that the team could lead Mark to a stage victory. He’s repaid more than that belief with his two stage wins.

PEZ: How much research do you do the night before the stage?
I spend quite a bit of time, as do the DS trying to get as much information as we can about the finish – we study the road book and use Google Maps so we know what to expect. 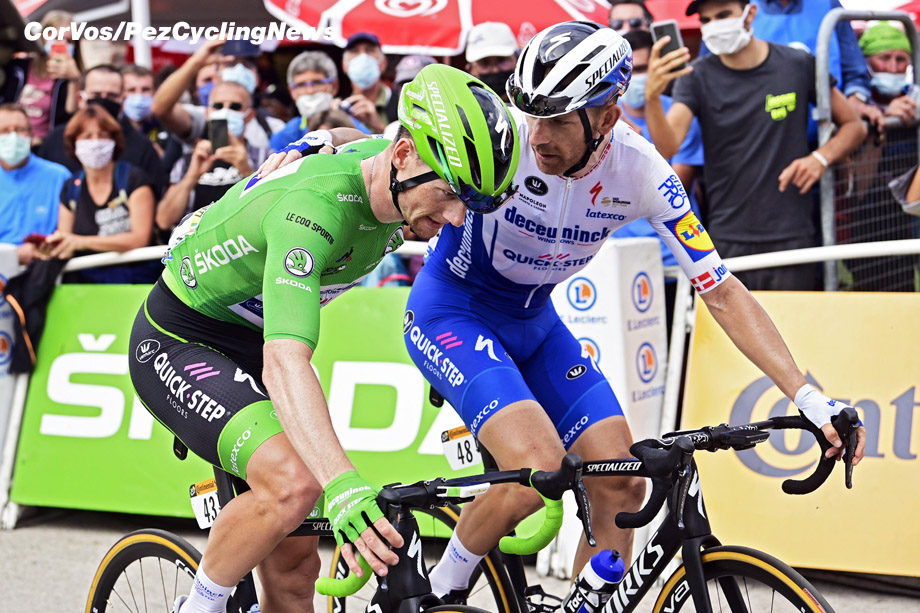 PEZ: How does Mark compare to Sam to work with?
I’ve worked with quite a few sprinters now and whist their personalities differ, my job remains the same – bring the sprinter to the place where they should be.

PEZ: The speeds in those finishes are crazy, 70 plus KPH, can I ask about the watts you’re generating?
Of course, there are no secrets with me, Chateauroux was extremely fast because it was slightly downhill but as regards watts it depends on the circumstances. On the third stage I had to get him into position rather than lead him out so I was around one minute at 600 watts but in a ‘classic’ lead out I’ll be generating 11 or 12 hundred watts for 15 to 20 seconds. I’m surprising myself, as you get older you expect your power to drop off but I’m actually gaining, not losing top end at all. 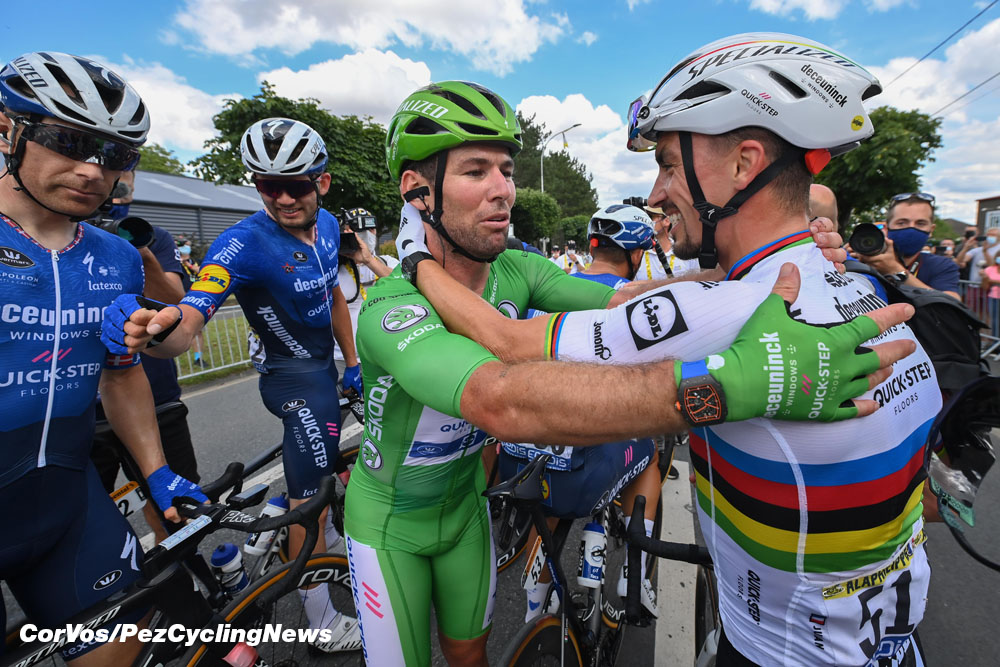 PEZ: Do you do a debrief after each stage?
Not formally, some teams do but we talk a lot about what has happened if things go wrong, on the bus and around the dinner table, so yes, we do evaluate but not a big formal type of affair. 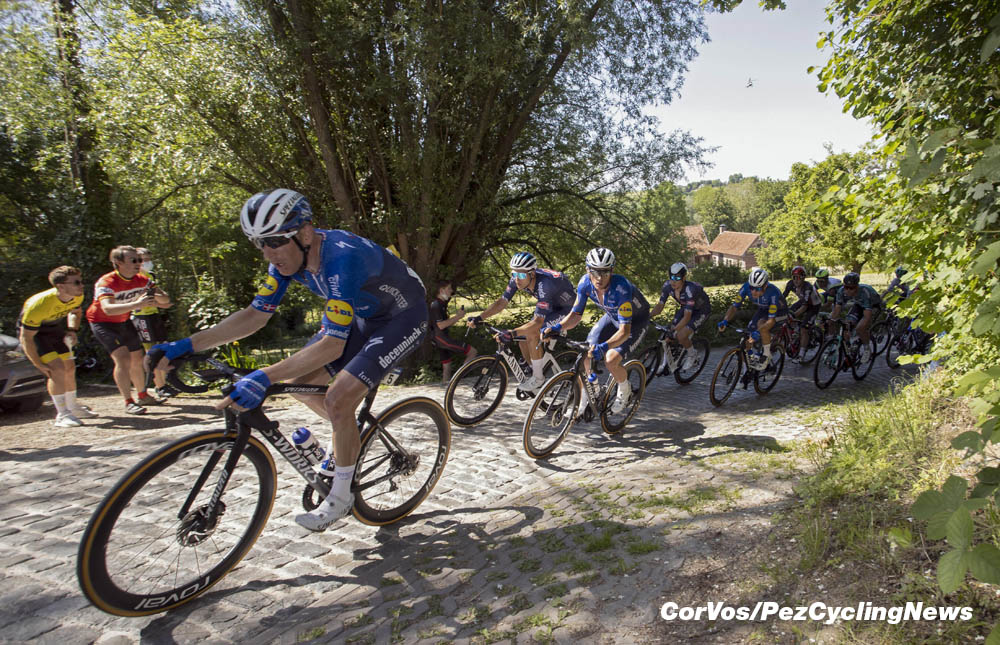 Work to do for Mørkøv

PEZ: Do you room with Cav?
No but we have a good understanding, despite the fact that we’ve both been pros for a long time [Michael since 2005 with Danish continental team GLS and Cav also since 2005 with German continental squad, Team Sparkasse, ed.] the Tour of Belgium was the first time I’ve worked with him – we’re like an old couple in a new relationship!

PEZ: Was there champagne after the stage victories?
Absolutely, always! We’re never shy to celebrate, the atmosphere on the team is always good, not just among the riders; the staff are fantastic too with good morale even when we don’t win. 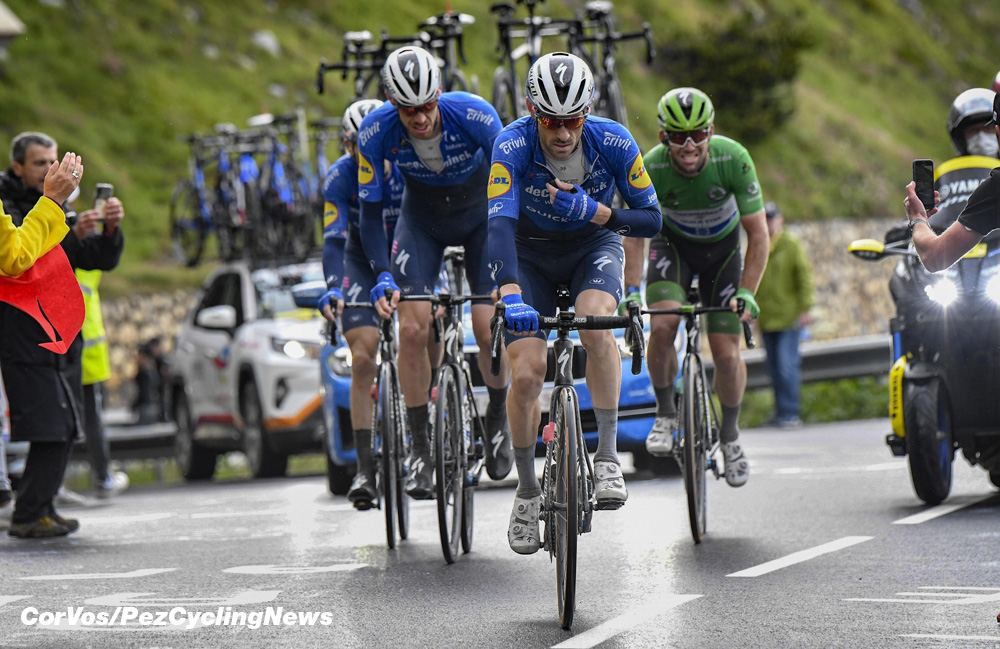 A tough days work on stage 9

PEZ: Stage Nine to Tignes and the time cut, inside by 1:31, a close one.
It was a tough day, we knew before that it was going to be a day on the limit, the stage wasn’t long so the cut was tight with no time to mess around. Mark slipped back after around 20 kilometres and Tim Declerq, Dries Devenyns and I stayed with him, we found a rhythm and just got on with it. I don’t often get emotional, in life in general or on the bike but I felt a tear coming when we crossed the line and knew we’d made the cut. But it was a hard day, knowing the knife was there at your throat for the whole stage. 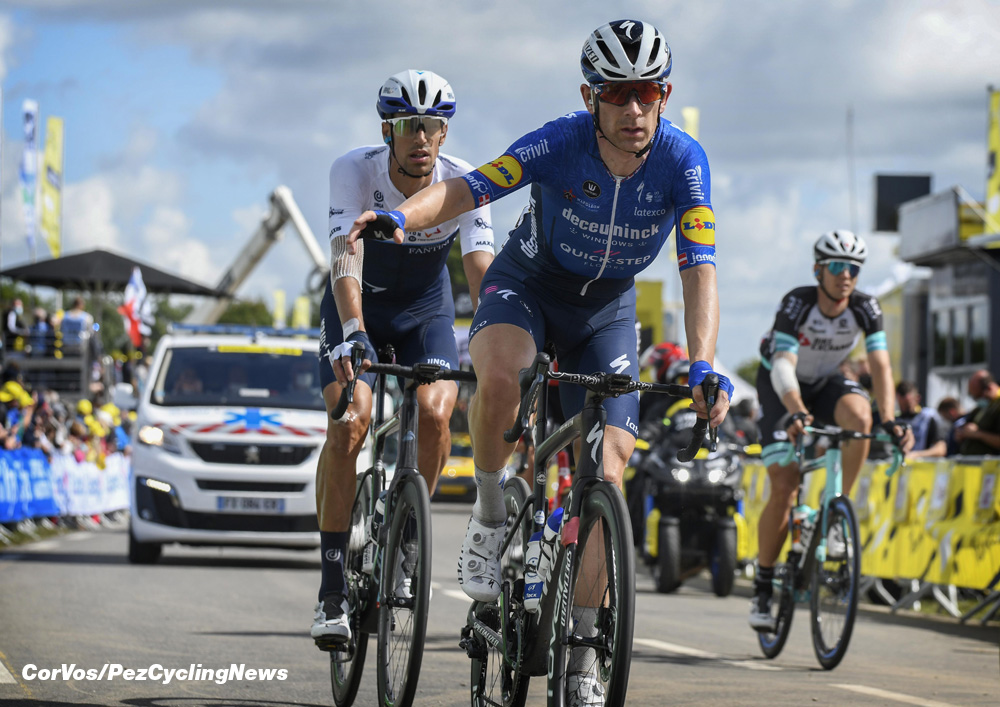 PEZ: The early crashes, down to the parcours?
Big, early crashes are not a new thing in the Tour de France, the first week is always extremely dangerous, nervous until the classement settles down. Everyone is fresh and take risks; and in final like Stage Three on narrow roads and technical descents it’s very dangerous – to my mind, that finish was fine for the last week of the Tour but not the first. 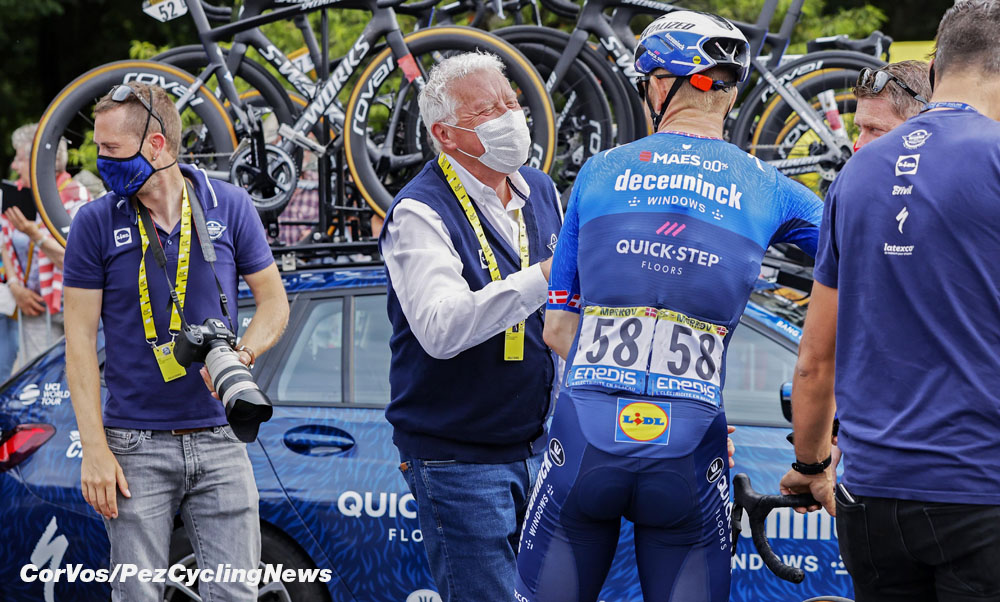 Mørkøv and the boss – Patrick Lefevere

PEZ: Some say that race radios contribute, every DS telling his boys to, ‘move up!’
Whilst I can understand why people might think like that I don’t think getting rid of race radios would make any difference. It’s true that sometimes I see teams stressing and moving up and I can’t understand why – but it’s their DS telling them in their ear piece to move up.
That said I think that riders would just use other methods to see where the places were where they should be at the front if there were no radios – apps on their handlebar computers for instance – and there would be no change. 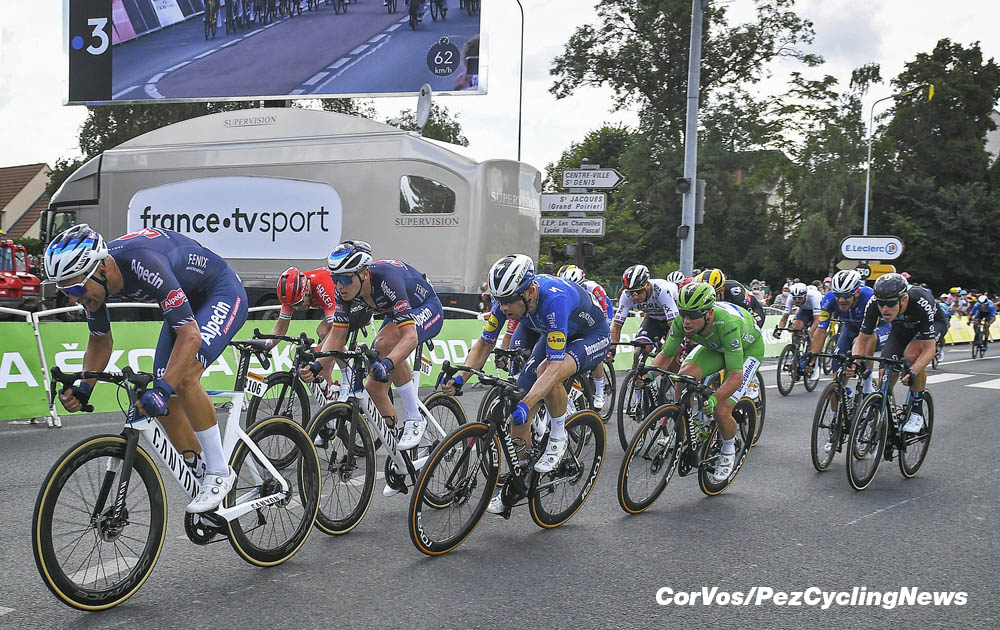 Hard work to control the sprints

PEZ: Things may well be harder for you to control now with Ewan, Merlier and Démare all out?
That’s about right, people think that it’s good for us that there are less sprinters to worry about but it also means that there are less teams with an interest in controlling things. Certainly with Caleb gone Lotto aren’t interested in sprints, nor will FDJ with Démare out but Alpecin still have Philipsen, so they should still work with us. 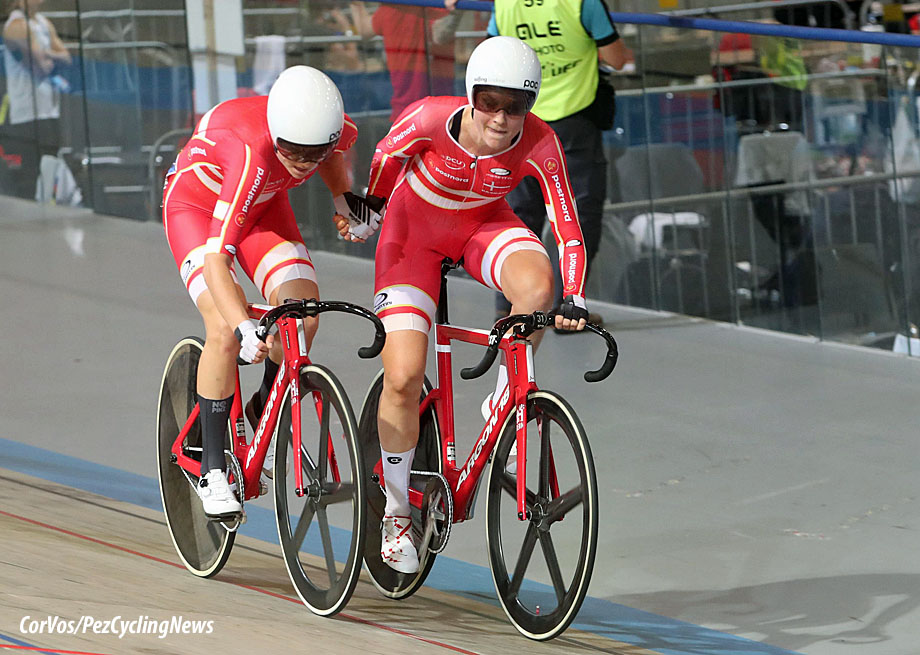 PEZ: Tokyo and the madison with Lase Norman Hansen with whom you won the world title?
Right now I’m focusing on the race I’m riding but I’ve already done a lot of preparation for the Olympic Madison in terms of knowledge of the conditions, the track, the opposition and equipment. I have 20 days between the Tour finish in Paris and the race, I’ll have 12 days at home to recover and get leg speed then I fly out to Japan. 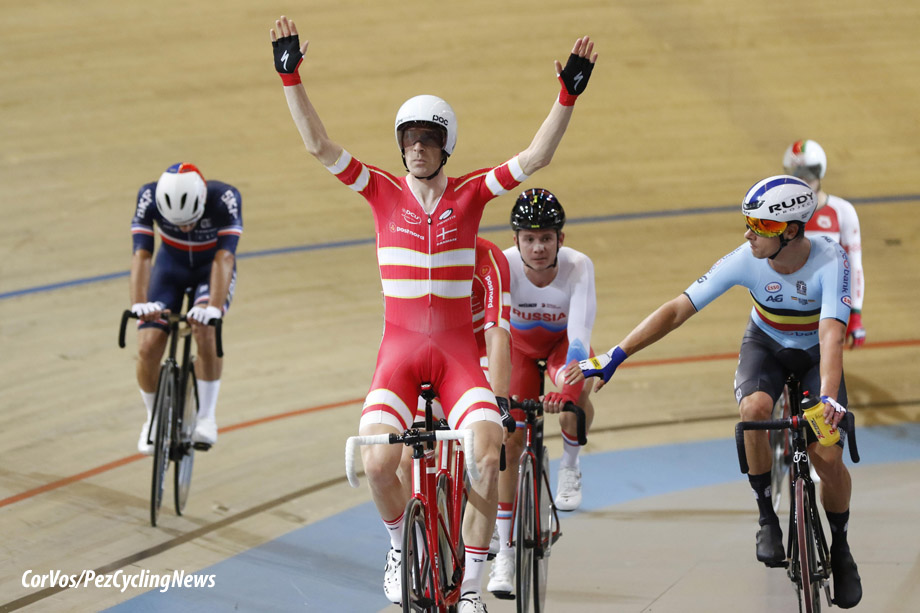 # I write this interview up on the eve of Stage 11 with its double ascent of the Ventoux – can Deceuninck shepherd Cav through this savage day and on to the ‘sprinters days’ of Stages 12 and 13 where that historic 34th win may be waiting? One thing is sure, it won’t be because Michael Mørkøv didn’t give his all for Cav and Deceuninck. #