Rider Interview: New Zealand’s Tom Scully might only be 26 years-old, but he has already had quite a full career. From national champion to podium in the Under 23 Paris-Roubaix via the Garmin development team and the UK criterium scene, he now rides for the Australian ProContinental Drapac team. His recent top performance in the French stage race, the Boucles de la Mayenne brought the New Zealander into Ed Hood’s interview cross-hairs.

The Giro then The Dauphine dominate the news – but there are OTHER bike races. . .

Take the Boucles de la Mayenne run in the Pays de la Loire in France involving the best of those not on the WorldTour hamster wheel. The prologue went to rapid little Frenchman Bryan Coquard (Direct Energie); Stage One to ‘oldie but goodie’ and former U23 World Champion, Italian Francesco Chicci (Androni Giocattoli-Sidermec); Stage Two went to Coquard – who would run out overall winner – and Stage Three went to a man we here in the UK are more used to see zooming round town centers – Kiwi, Tom Scully now with Aussie ProConti. Squad, Drapac Professional Cycling.

Then 2010 saw him take the national scratch title as well as figuring in UCi World Cups in points, team pursuit and madison and there were Oceania titles in the scratch and madison in 2011 by now with Jonathan Vaughters Chipotle Development Team. Still with JV for 2012 there was a cosmo program with races in his homeland, Singapore, Japan, Belgium and a stand out third spot in the U23 Paris-Roubaix. 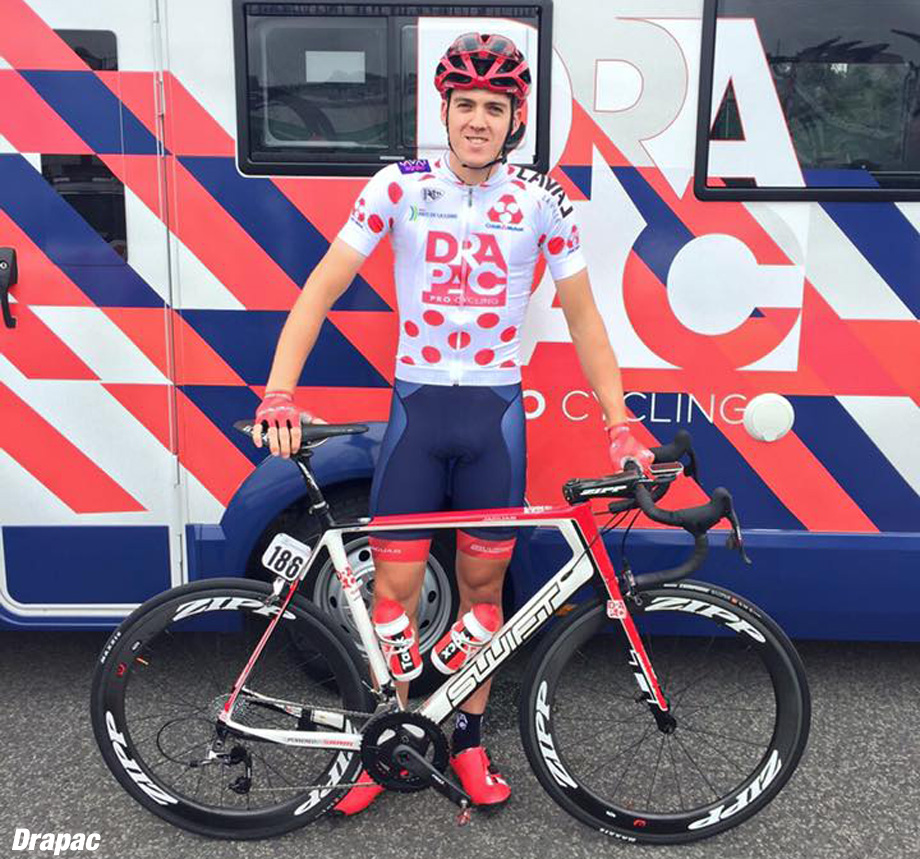 Despite a stagiaire spot with Garmin that year there was no 2013 contract – that came from resurgent UK squad, Raleigh. He made an immediate impression on the scene with crit wins in Redditch, London, Stafford and Ipswich as well as second in my home town of Kirkcaldy.

Season 2014, still with Raleigh saw a season split between road and track with the highlight a silver medal in the Worlds Points Championship behind Columbian flyer, Edwin Avila.

Last year saw him third on GC in the savage Tour of Normandie as well as adding to his crit score for Raleigh on the UK scene. But it was ‘all change’ for this season with a move to Aussie Pro Continental squad, Drapac.

We caught up with Tom soon after his victory in the Boucles and started by asking him to talk us through the day. . . 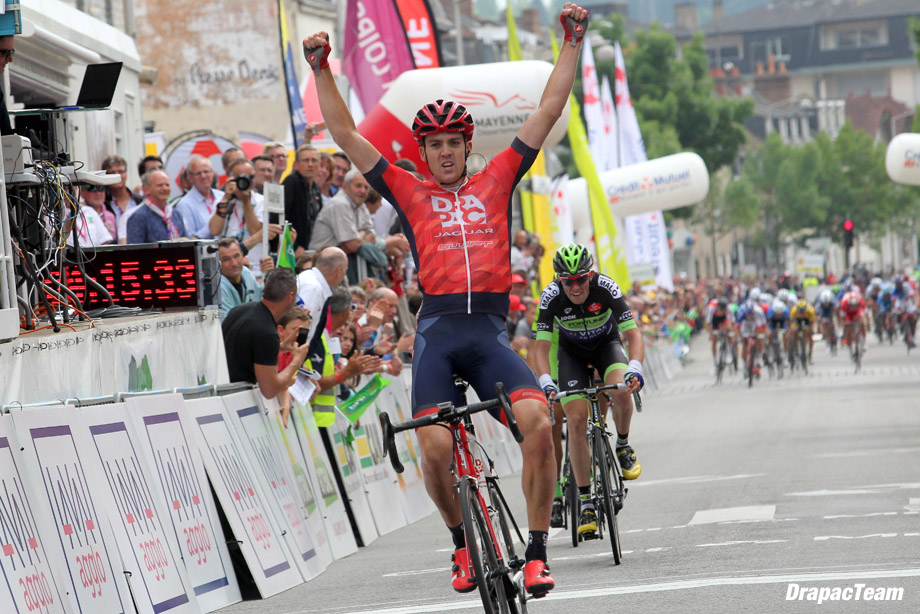 Tom Scully: The stage win Boucles was pretty special, I knew my condition was good after the previous stages so I had support from my team mates throughout the stage.

Will Clark was attacking when the break came back to make the race hard, on the run in to the final laps there was one last King Of The Mountains sprint; I could feel everybody was starting to get tired so thought a late break might go.

I followed the attack by Cofidis on that last KOM with two others and we closed a small gap to two others, we all worked well and rode hard until the final laps on the circuit in Laval.

The circuit in Laval was a lot like a criterium so suited my strengths, I knew six riders could ride much faster around all the tight narrow right left and right turns than what the peloton could, so thought we still have a chance when the time gap was hovering between 15-30 seconds.

The TopSport rider attacked up a small hill at 1.5km to go and got a small gap, the Fortenau-Jean Floc guy followed but couldn’t close the gap.

So I took over at a K to go with still two corners to go I knew there was time to make some distance up in the corners if I took them fast; I timed it perfectly and started my sprint early at 350m running in the draft of the TopSport rider, to come past and put the arms in the air for my first road win in Europe. 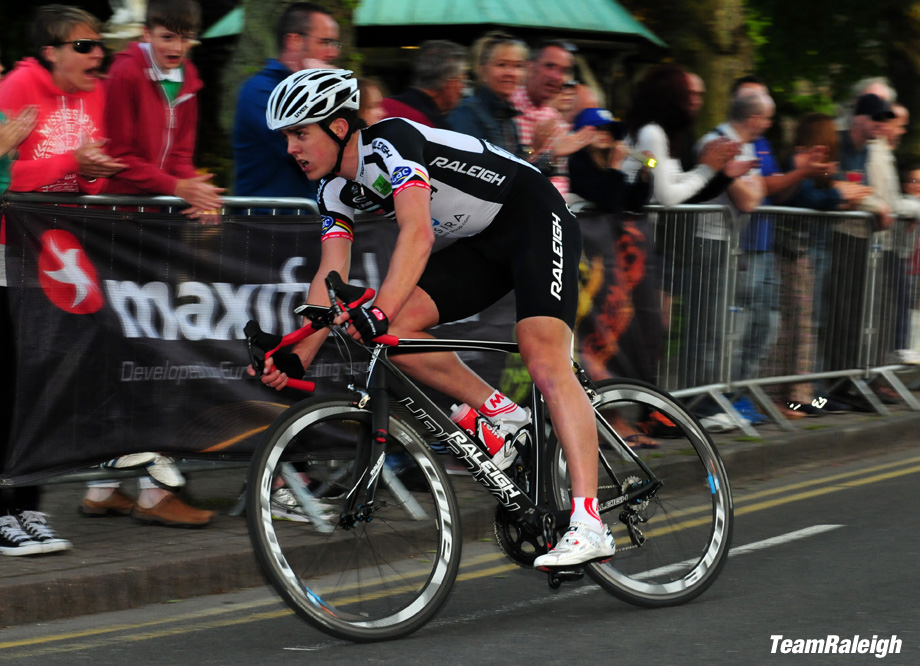 PEZ: You showed good form in the prologue, too.
Yeah, fourth; it was a technical time trial of 4.4km – short and sharp is what I like.

PEZ: And second on points overall behind Coquard.
At the start of the race I wasn’t thinking about the points, it just turned out that way, but yes Coquard is going well this season and hard to beat.

PEZ: And Chicchi still winning. . .
Yeah, congratulations to him.

PEZ: French racing suits you – third on GC last year in Normandie.
Yes, third in Normandie last year; a race also with a short technical prologue to start, I enjoy the racing in France the atmosphere at the start and finish towns, the passion of the French riders, small roads, and sometimes challenging weather seems to suit me. 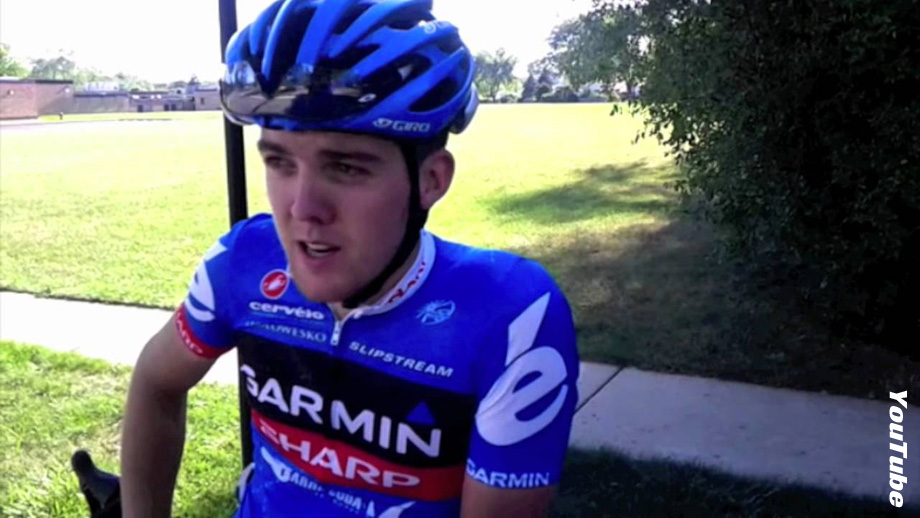 PEZ: You rode stagier at Garmin but no contract?
No – but looking back I can see I wasn’t ready for the step up at the time.

PEZ: Why the UK with Raleigh?
One door closes – another door opens . . . I always had an interest in racing in the UK, I had heard about the criterium series; I’m glad I went to the UK – I enjoyed my time and racing there. 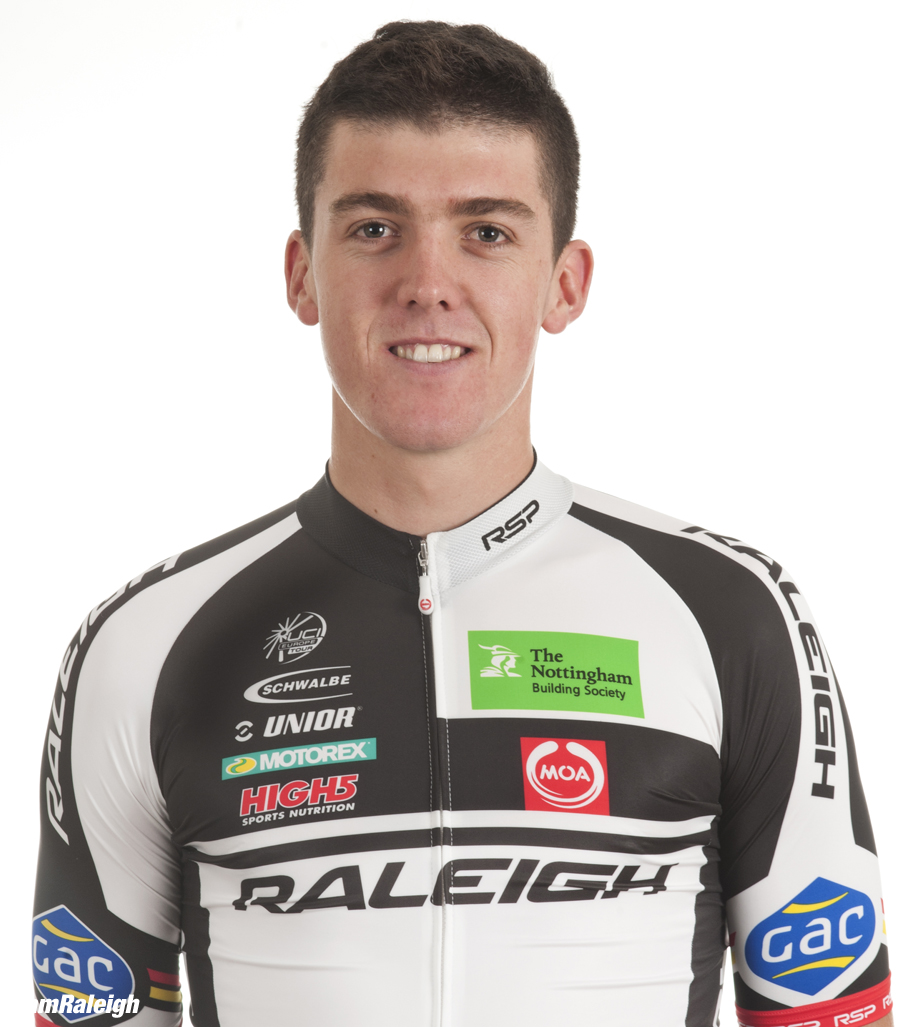 PEZ: A big change, this year.
I thought it was time to push myself in longer stage races of a week and more long.

PEZ: Do you miss the UK crits?
I really enjoyed racing town centre crits in UK, high power, high speed, but for now I’m not missing them – I’ve been watching the results from my team last year, and each time I see them I’m a little bit squirmish as I know how hard racing they are.

PEZ: UK squad to Aussie team, much difference in attitude?
The mentality of GB teams to Aussie teams is pretty similar, both have a really professional and determined attitude when it’s race time, but both know have to have fun also. 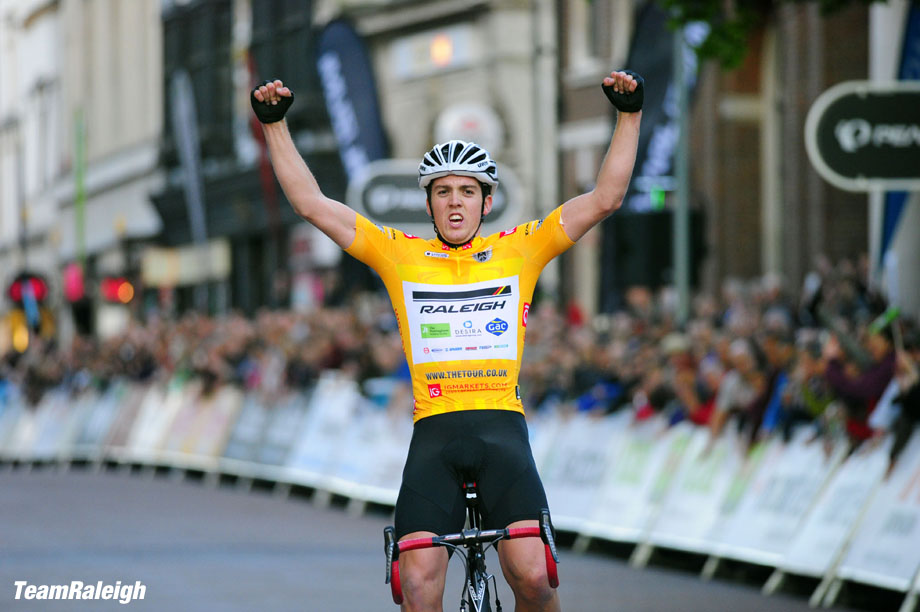 PEZ: Your program has been hectic: Herald Sun Tour, Langkawi, Circuit Cycliste Sarthe, Fleche du Sud, Tour of Norway. . .
Yes, lots of stage races this year for me, each one slowly building the engine more and more.

PEZ: Your were second in the New Zealand TT nationals in January; any ‘what ifs’?
It was a bit of a surprise for me, I only started with the TT bike one day at the end of Drapac team camp mid December. I guess the “what if” is what if I had started earlier and with more focus? But it it’s always hard at that time of year, when everybody is enjoying Christmas holidays.

PEZ: Where’s home in Europe?
This season home is Girona in Spain. 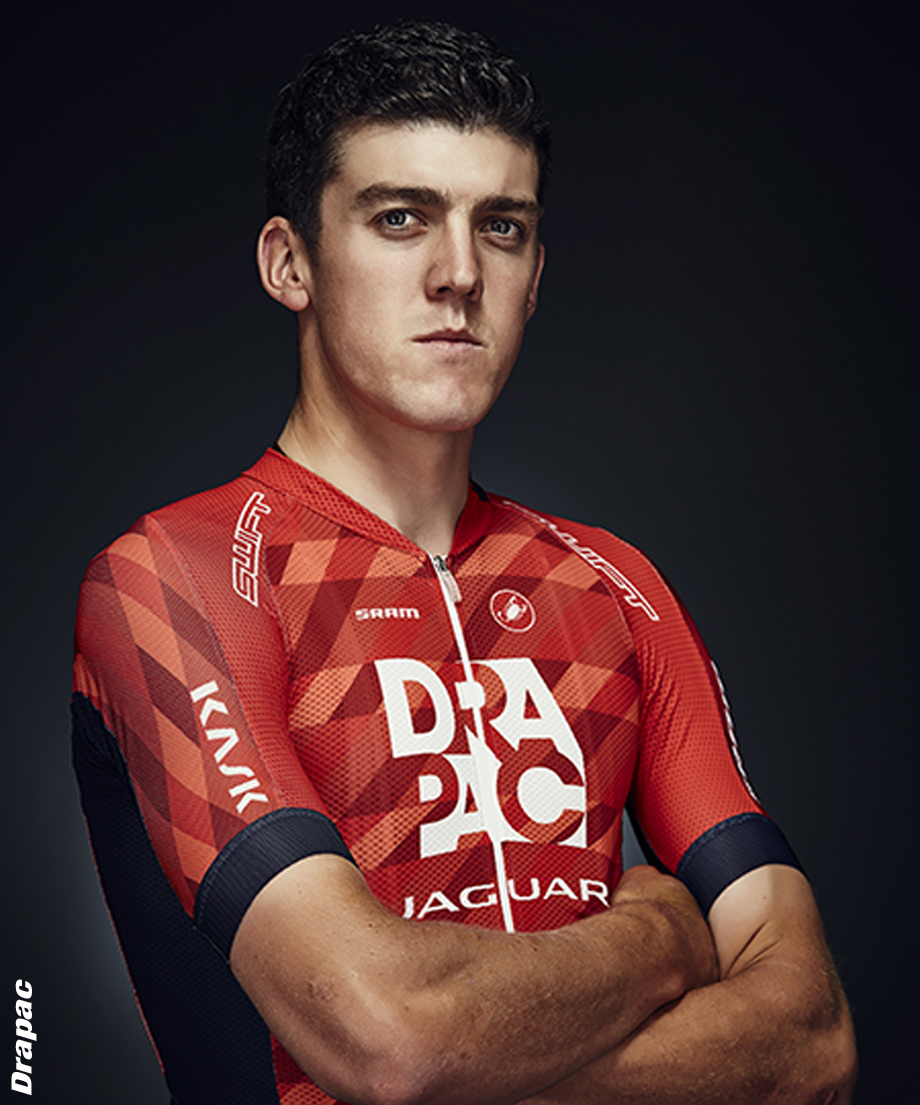 PEZ: What’s next?
ZLM, Austria, Portugal, Fjords and a couple of one day races sprinkled in the middle.

PEZ: You had good success on the boards, is it something you’ll come back to?
I like the crits and I’ve always loved racing the track; it can teach you so much – they’re both similar in some ways. But for now it’s all about the road – who knows though, if I got the opportunity to race a 6 day I wouldn’t say no. . .

Keep up with the Drapac team HERE.

Moolman-Pasio solos to victory in Germany