Interview: Edita Pucinskaite – In Her Own Words

Ask top North American pro riders to describe racing in Europe and you often hear terms like harder and faster. Edita Pucinskaite is one of the ladies that make it so. When I first contacted Edita I asked – are you Edita, the great bike racer? Her reply surprised me ‘I am Edita, a cycling rider’. You wouldn’t typically hear a reply this modest from a Cat IV club rider, but to get it from a former World Champ and winner of the 1998 women’s Tour de France was… shall we say refreshing.

Look at the results on the CDM (World Cup) circuit and the top ten names are usually Euro girls. We asked Edita Pucinskaite why that is, how Euro girls balance sport with sex appeal, and about life in the USSR. Edita is fluent in Lithuanian, Russian and Italian. But we’re not, so Edita took on the challenge of doing this interview in English. The Pussycat has no fear… 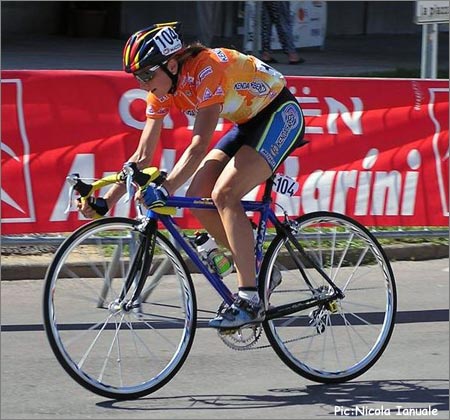 Here’s Edita putting the hurt on at the Giro di Toscana last year.

WHAT’S NEW PUSSYCAT?
Randall: Hey Edita, thanks so much for joining us on PEZ – we’re excited to have you. You live in Italy now – in addition to Andrea Peron does PEZ have many fans there?

Edita: Italy loves cycling and there are several worldwide sportsmen who can relate to the very interested Italian audience. In Italy there are dozens of professional sport clubs and hundreds of local clubs for amateurs who love to be on a bike.

Randall: You have 62 victories over the past ten years, not to mention numerous other podium finishes. You earned your victories in the most important races in women’s pro cycling. Yet they call you ‘Pussycat’. How did you get that name?

Edita: In 1998, during the Tour de France I was wearing the leader’s jersey for the entire race and after the finish of every stage I was always asked to climb on the winner’s stage for an honour ceremony. In the beginning, the French sporting speaker Remy Pigois had understandable difficulties pronouncing and remembering my name. 🙂 A few days after the Tour de France started, he came to me and asked with a smile – ‘It looks like you will never yield the leader’s jersey to your competitors! May I call you “Pussycat” because for me and everybody it will be much easer to refer to you by this new name?’

I agreed of course. Now I am used to the nickname in France and Italy but for friends I am still just Edi. 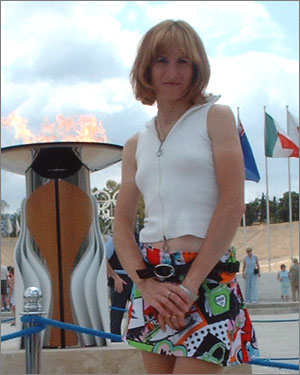 I’M JUST A GRRRL
Randall: Lance Armstrong has won the Tour de France 6 times in a row. You wore the leaders jersey in the women’s Tour de France for every stage to the finish in 1998 – the year of Lance Armstrong’s first Tour victory. I think a great champion like Lance would recognize what a tremendous accomplishment that was. Do you feel that great female racers like yourself get the recognition they deserve?

Edita: I would love to have won the Tour de France 6 times in a row instead of the one Tour de France leading wire to wire. 🙂 But surely I am happy also with my comparatively small achievement. However, women’s cycling still cannot be compared with the men’s cycling neither from the financial nor from the organisational point of view.

Women’s cycling is a small and constricted world that ploughs its way day by day constantly overcoming obstacles and challenges to its continued existence. Even though this way is difficult, it is still possible to go ahead. Currently the women’s world champion, the CDM and Tour de France winners enjoy the limelight only for a short moment after the V-Day, and then very soon they must return to their normal everyday lives. The life of a professional male cyclist on the other hand changes dramatically if he gets the same titles.

Anyway, after a victory, when you realize your potential and achieve the goals that only some years before seemed out of your grasp, you feel a real euphoria and a stab of joy. And then you to get the understanding that it is not the money, not the being sought-after/well-liked or your rating that matters. Everybody has her own values and for me those are health, a happy personal life, realising my goals, winning fame for my country and my team and gladdening my relatives, near and dear friends, supporters and fans. 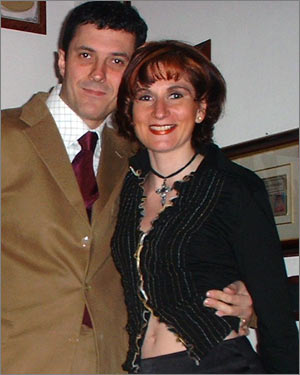 Edita and her hubby Edy Roby on Valentine’s Day.

Philadelphia Freedom
Randall: You won the Liberty Classic in Philly in 1997. When we talk to the top riders here in North America, the girls who race the CDM circuit, they say that racing in Europe is harder. Do you agree – why do you think that is?

Edita: The time in Philly in 1997 left an imprint in my biography and made an impression upon my personal life story. When flying to USA from Europe, in the plane by pure luck I met Roberto Rossi who some years later became my husband. At that time Roberto was also going to the USA with a professional men’s cyclist team “Amore & Vita” as a physiotherapist-masseur. During that week in Philly many incredible things happened. I got the chance to get to know Roberto better and after I won the Liberty Classic the week later I was the happiest person in the world and these days were the best moments of my life.

In Europe, especially in the most important CDM circuits, compete all the greatest elite cyclists in the world, who train especially for these prestigious races. The European clubs are attaching weight to these competitions, and subsequently every sportswoman turns up her sleeves and buckles down to win. The competition-spirit is at the top level and achieves the ultimate level in the European races. I could compare CDM with a world championship.

Randall: There aren’t so many girls from North America racing in Europe. How are they perceived by the peloton when they come over to Europe to race?

Edita: Every country has its self-identity and focuses on its own indigenous do’s and don’ts. I think the crucial issue is language when it comes to communication between different nations. I noticed that Anglophone sportswomen (Americans, Canadians, Australians etc.) used to find quickly common accord and to create an ambience, while other big groups of professional cyclists, (such as Italians or the foreigners which come to train in Italy) stick together.

During a cycling competition, all the barriers disappear and the girls are competing for the interests of her national, European or American team. I did not notice any discrimination or bias towards the American sportswomen in Europe.

It is a pity that the American cyclists rarely come to the European competitions. On the other hand, we Europeans often miss many great competitions in America where I would like to emphasise I adore the very good organisation of competitions, competition style, the better financial conditions and considerable respect towards sportsmen and sportswomen.

BREAKFAST IN AMERICA
Randall: Do you have any favourite riders from North America – any friends you want to say hi to?

Edita: Two years ago in my previous Italian teams “Acca due O” and “Alfa Lum” I had a great team friend Mari Holden, who was a strong chrono-woman and very sincere person, who decided this year to leave the sport of cycling.

Regrettably I had no chance to make a better acquaintance of Dede Demet-Barry (she also decided to quit cycling at the end of the year). I respect Dede for her great persistence and show my honour for her strong-minded spirit and the way she always proceeded with unfaltering steps throughout her sport career.

I remember very well the “Hewlett Packard” two-week competition in America in 1995, where I wore the leader’s jersey for every stage from the beginning until there were 2 days left in the competition. During the two weeks she and I, we fought a duel. At that time I was an unknown 19 year-old girl, while Dede was the most famous and strongest American cyclist. Two days before the competition finished Dede snatched away the victory and I lost the leaders jersey… 🙂

Stay tuned for Part 2 of our interview with Edita – as we talk about her origins in Lithuania, Italian teams, and her part time “career” as a journo!