Edward Theuns has been slowly and quietly working his way up the ladder of professional cycling. From riding for fun to racing with Belgium’s most famous ProConti team, Topsport Vlaanderen to the top rung of the WorldTour with Trek-Segafredo. On Saturday he was 5th in the first stage of his first Grand Tour and took the Best Young Riders jersey, Ed Hood caught up with the young Belgian in Normandy the evening before stage 1 of the 2016 Tour de France. 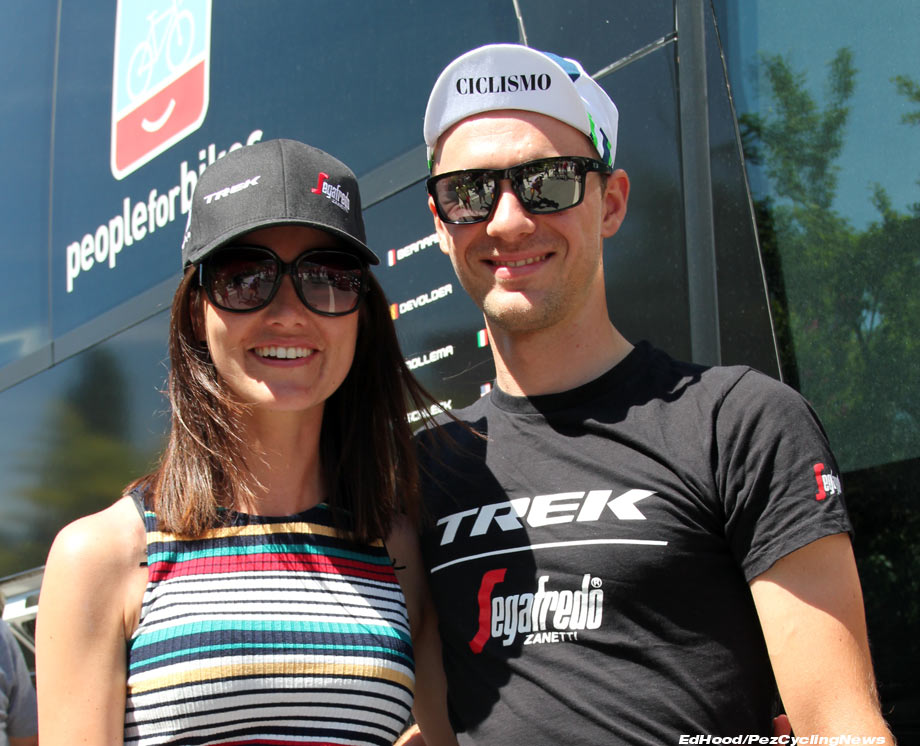 At the Dauphine stage 5 start, Edward posed with his lovely girlfriend Lien (you may recognize her from the Flanders Classics podiums…), and his newest piece of swag – a PEZ cap.

Cav’s in yellow – and green; Paul Voss (Bora-Argon 18) is in poids and Tour of Belgium stage winner, Edward Theuns (Trek-Segafredo) wears white as best young rider, grabbing fifth place ahead of the likes of Coquard and Kristoff in the mayhem of the Stage One finalé.

PEZ chatted to the 25 year-old Belgian – who moved up from pro continental Topsport Vlaanderen-Baloise to WorldTour Trek-Segafredo for season 2016 – on the eve of the Tour. 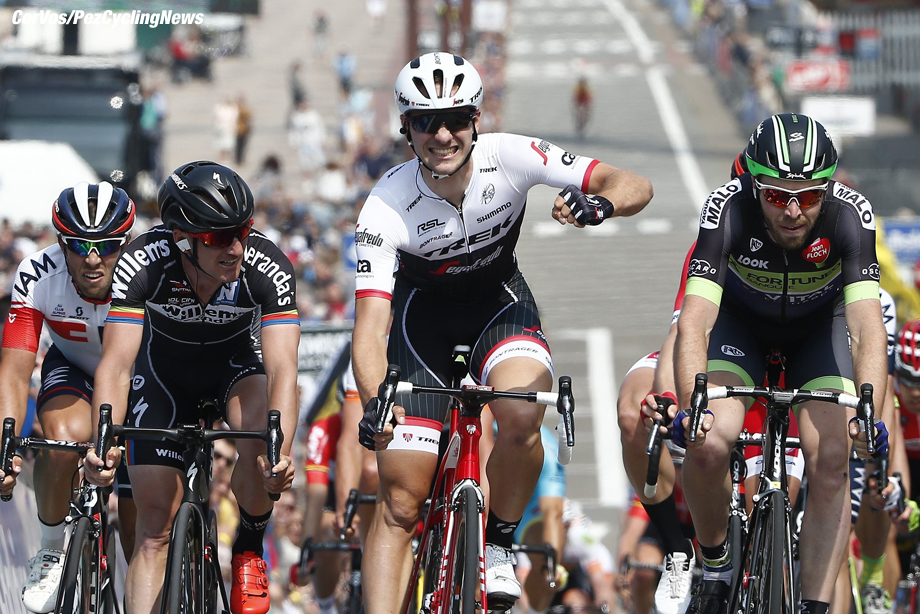 Stage 2 win in the Baloise Belgium Tour 2016 for Edward

PEZ: You were a soccer player, originally Edward?
Edward Theuns: That was a long time ago! I wasn’t bad but I was never going to be a big player.

PEZ: How did you get into cycling?
My brother had a friend who rode the bike and we’d all go on runs down to the Ardennes – so I started out just riding for fun then thought I would try racing.

PEZ: Who were your idols as a young rider?
I was a big Robbie McEwan fan, I don’t know why – maybe it was because he was so fast in the sprints or because he made the effort to learn how to speak Flemish? 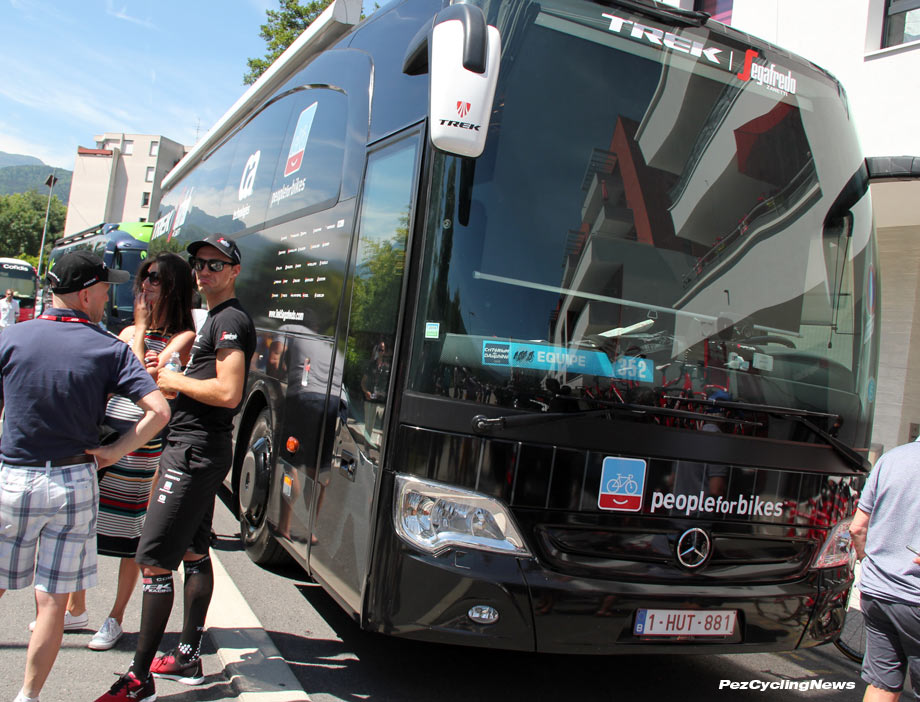 Edward’s teammates bestowed his newest nickname “Looney”… to match up with his last name Theuns (rhymes with “toons”).

PEZ: Was there a result which made you think; ‘I could be a professional’?
In my first year as a U23 I won the last stage in the Triptyque des Monts et Chateaux [a major Belgian U23 stage race and shop window for professional teams, ed.] I was surprised but thought; ‘maybe I can do this as a professional rider!’ [Edward doesn’t mention that he beat John Degenkolb and Taylor Phinney to win that stage, ed.]

PEZ: How did you get the TopSport ride?
I was doing well in my last year as a U23 and they picked up on me. It was a really good step – especially since I had no other possibilities to turn pro. I learned a lot with the team, gained experience and became stronger as a rider. 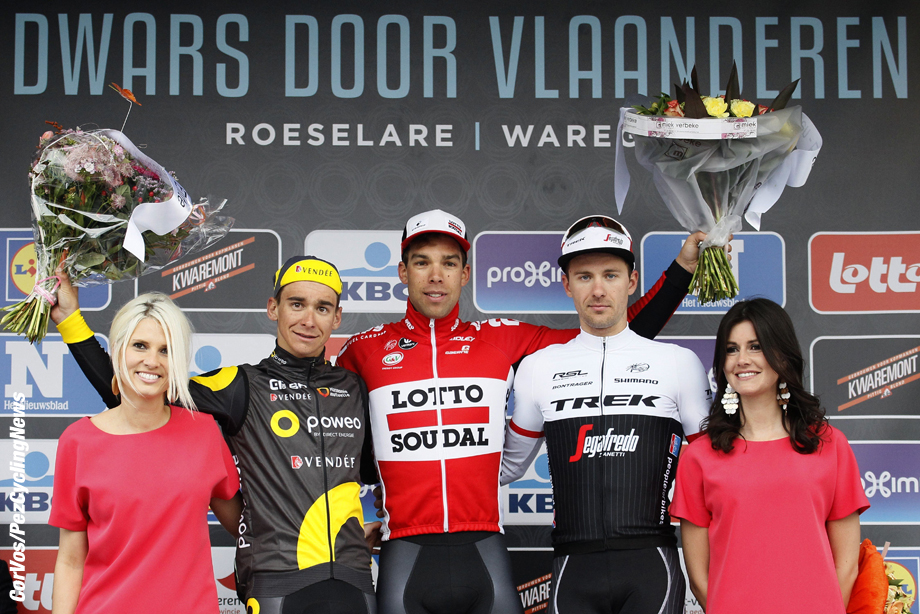 PEZ: How did you get the Trek ride?
My manager did a good job for me! I had other options but I liked Trek because of the interest they showed in me and also because of the quality of riders on the team and program.

PEZ: What are the major differences between riding for TopSport and Trek-Segafredo?
The Classics season is similar, Topsport get starts in all of the northern spring races but where it differs is in races like Paris-Nice and the Dauphine. Then there’s the Tour, which is going to take me to the next level – three weeks of racing, I’ll have to see how that goes. 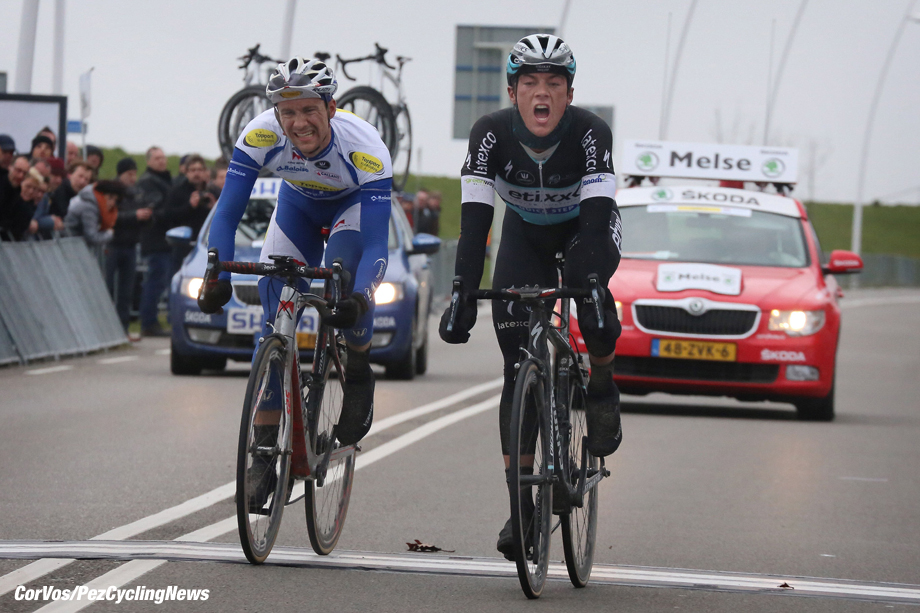 PEZ: King of the Mountains in the Giro della Regione Friuli in 2012 – are you a Belgian climber then, Edward?
No! That was a few years ago, I got in an early break, took points in the King of the Mountains competition and held on to it. I’m not a great climber but as a pro you have to be a decent climber just to survive in the peloton – all pros can get up hills.

PEZ: Which of your palmarès pleases you most ?
For me it’s still second place in Dwars door Vlaanderen, I felt on that day I could win a big race; the way the race developed and the team tactics played it was my team mate Jelle Wallays who won with me second but it was a sign to me that I could win a big race at this level – I felt it was a breakthrough.

PEZ: The Scheldeprijs is a race you do well in – second last year and fourth this year.
It’s funny because I seem to do well in the same races each year – maybe it’s because you did well before you have extra motivation to do so again? But yes, I’ve been close there twice now – it’s a race I’d like to win. 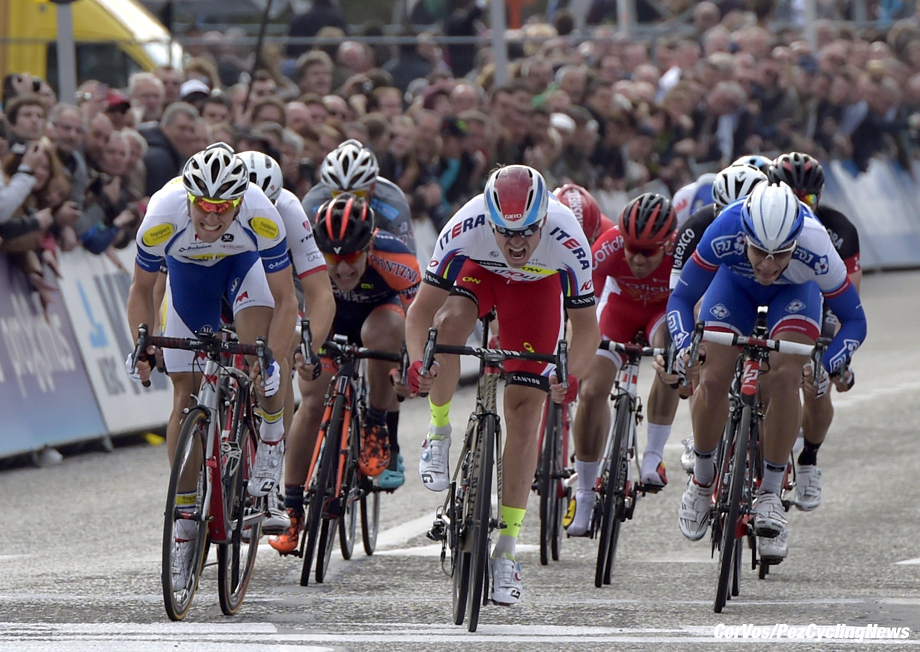 Sprinting against Alexander Kristoff (Katusha) in the Scheldeprijs’15

PEZ: Do you have a coach?
Yes, I work closely with the team coach – I started working with him over the winter. I use a power meter but talk to my coach most days, I think that’s important, sometimes you might feel tired and it would be best to do a little less – that personal contact between coach and rider is very important.

PEZ: Having left a Belgian team to go to a foreign squad do you still get as much attention from the home media?
Yes, I still get good attention but maybe a little more last year because if you get good results with Topsport – which is ProContinental rather than WorldTour – it’s more of a surprise for a ProContinental team to have successes whilst big results for a WorldTour team are normal.

PEZ: How are you settling in to your new aero Trek after your Topsport Eddy Merckx bike?
The team does a very good job with the material; it wasn’t so hard to get used to my new bike’s characteristics, the handling is very good – it’s always finding your perfect position on a new bike which is the most difficult thing. 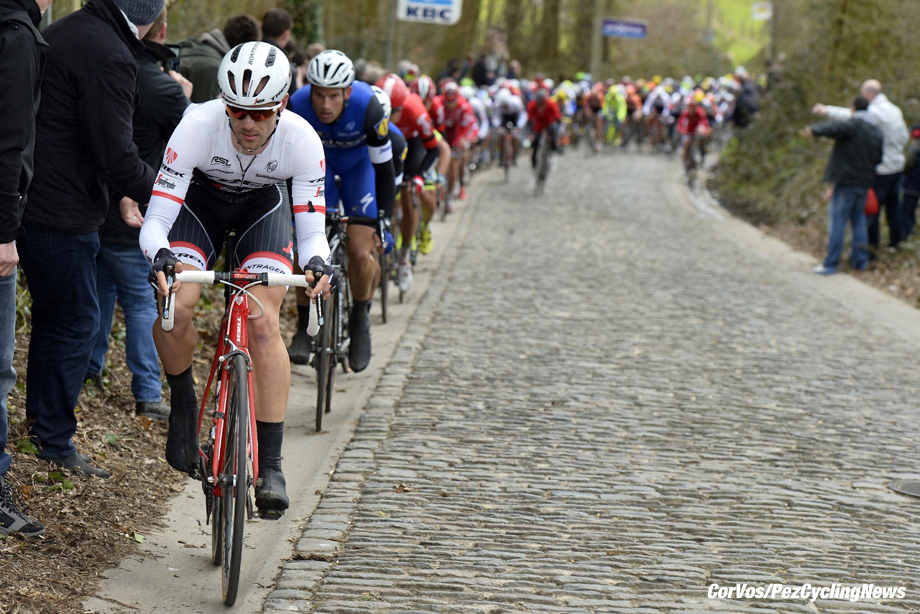 Taking on the cobbles in the 2016 Dwars door Vlaanderen

PEZ: ‘Motorized bikes’ – is there much talk in the peloton about this?
It doesn’t get spoken about much – I’d be surprised if it happens and I think most guys are like me and can’t imagine anyone actually trying to put a motor on their bike!

PEZ: You have a Bachelorship in physiotherapy – wasn’t the study hard to fit in to training and racing?
I achieved that when I was with Topsport; it wasn’t easy, it was hard work finding the time to fit it all in – when I look back I can’t imagine how I managed it but I’m proud that I managed to do it.

PEZ: Le Tour?
First of all, I’m excited and happy to have made the selection for the Tour within the team. I’ve never done a Grand Tour before so it’ll be a voyage of discovery for me. And it’s not just the race, it’s the things around it; all those fans, the media – it’s a big adventure! We travelled down to Normadie today – all the training is done now, so it’s easy runs and staying fresh for the Grand Depart. 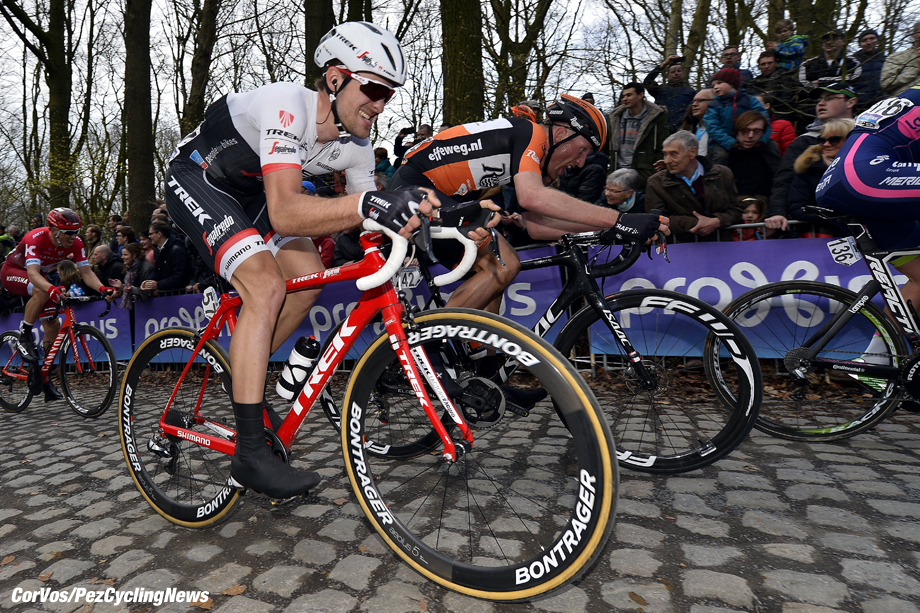 PEZ: And if you could win just one race in your career?
The Ronde van Vlaanderen – it’s special. 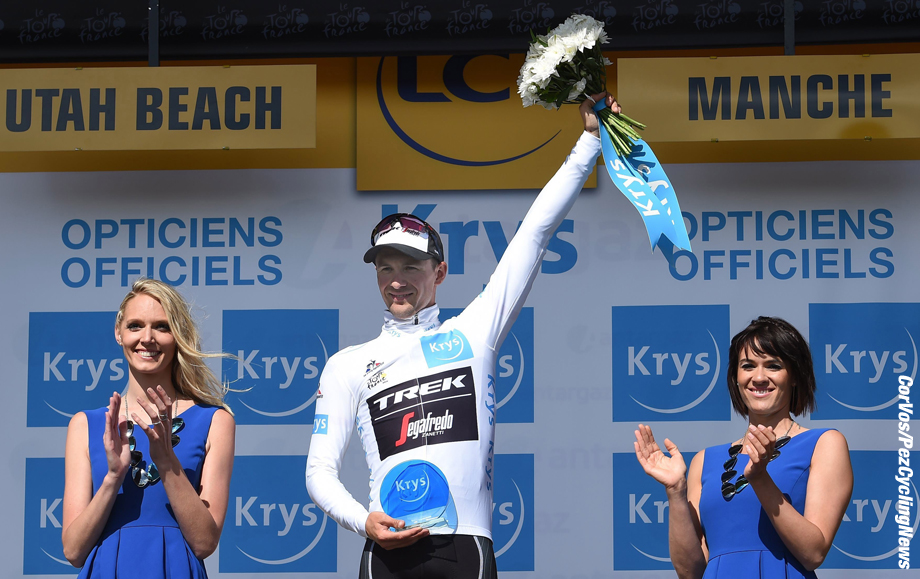