Rider Interview: Eros Poli is a big guy, with a powerful engine, good enough for an Olympic team time trial gold medal and a Tour stage win over the murderous Ventoux. Ed Hood talks to Eros about the Tour, Mario Cipollini and more ‘Super Bikes’. 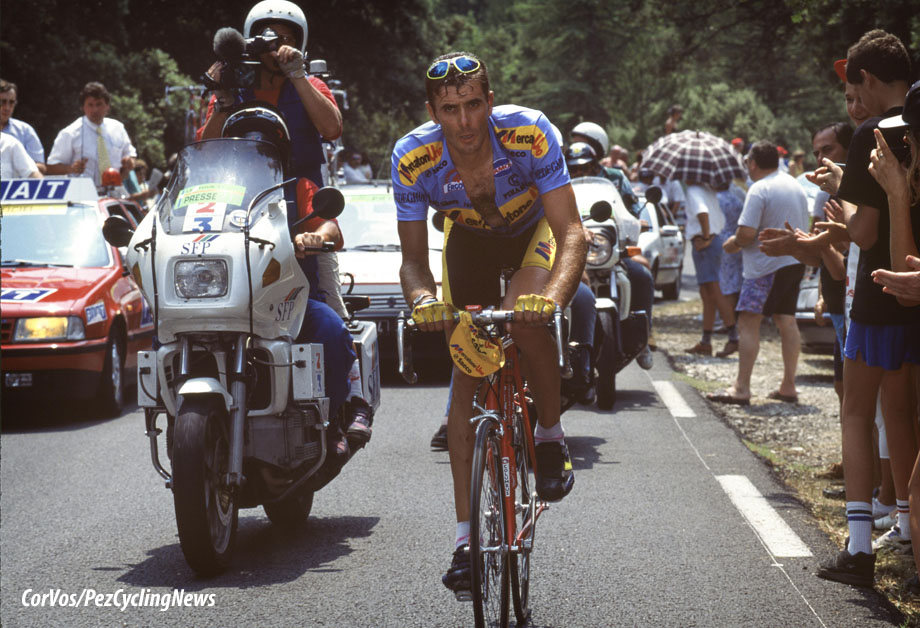 A day on Ventoux

“Un exploite extraordinaire!” Said the French TV commentator; “Bravo Monsieur Poli!” That’s Eros Poli; yes the big Dude who won that epic Tour de France stage over the ‘Giant of Provence,’ Mont Ventoux in 1994. That’s what the commentator was talking about – but there’s a little more to Monsieur Poli than just one ‘exploite.’ We spoke to Eros recently and our first question was to ask about the training that enabled him, Marcello Bartallini, Claudio Vandelli and future Italian Professional Champion and Vuelta winner, Marco Giovanetti to take Olympic Team Time Trial gold for Italy in the 1984 Los Angeles Olympics some four minutes clear of the silver medal-winning Swiss team.

Eros Poli: We trained three times each day, the first session was 15 kilometres at speed. The second session was between 70 and 90 kilometre with the first half of the ride a warm up then building up speed with the last five kilometres ‘full gas.’ The third session was 40 minutes motor pacing for two of us with the other two doing 40 minutes easy ride – we changed each day, taking turns about behind the moto. We did this four days each week with one easy day and one day where we rode distance. We did this for three weeks at our training camp in the Czech Republic. 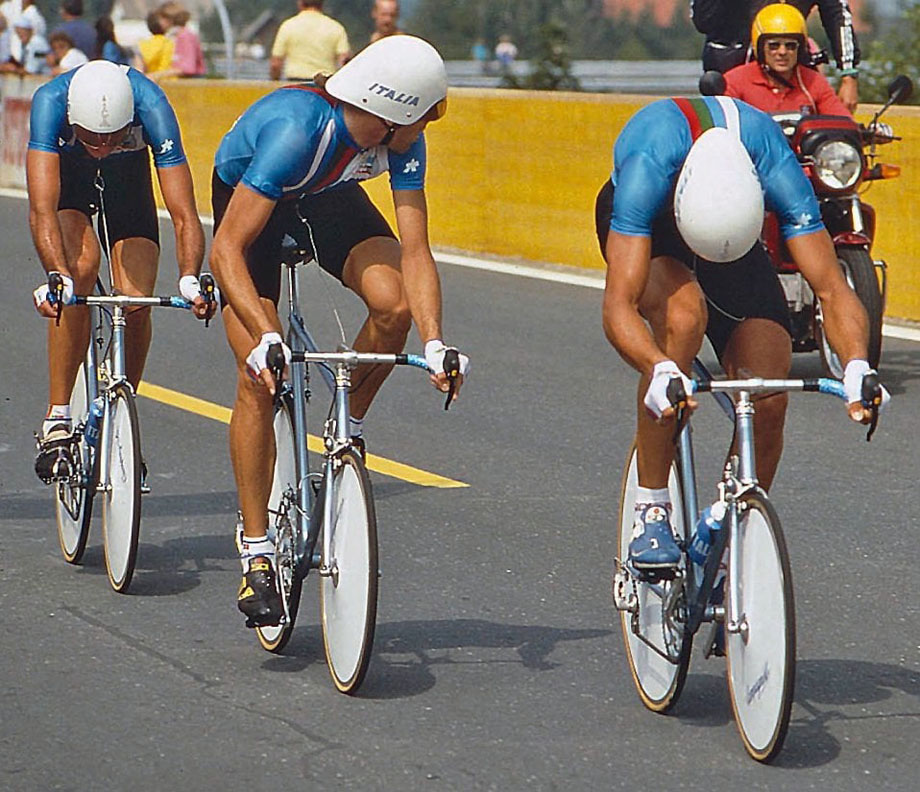 The front rider gave up on his cable

PEZ: What about handling those bikes with double discs?
Yes, we ran lenticular wheels front and back like Moser did in Mexico for his hour record,
but the front wheel was smaller, 24” so that diameter of wheel catches less wind; but that day in LA was hot and calm so it wasn’t a problem – and we were used to handling the bikes. The course was flat, 25 kilometres out and back, twice. The small front wheel is a big advantage because it lets you get 50 mm closer to the rider in front, the ‘train’ is so much shorter and aero. 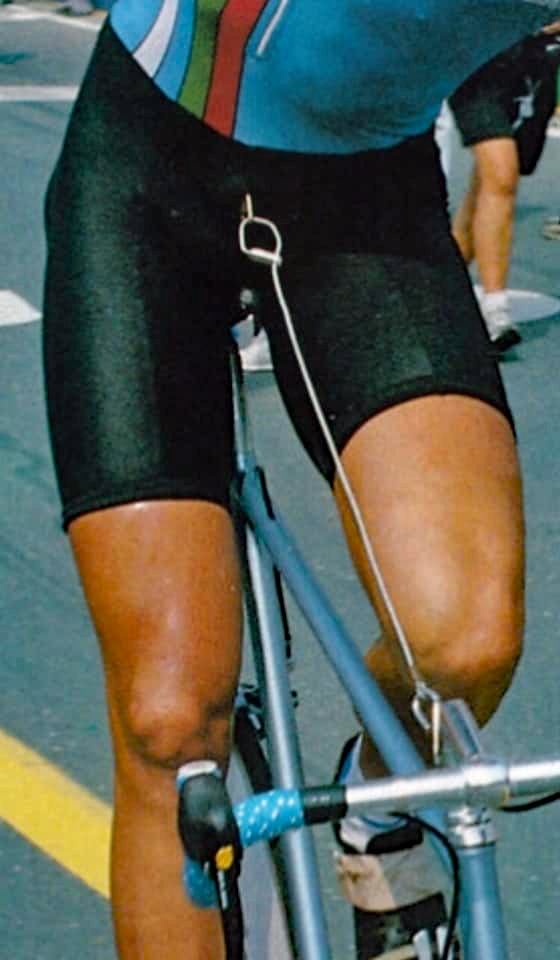 PEZ: What about the ‘cables’ you used in Villach in 1987 when you won the World TTT title?
The idea came from Assos, a belt around your chest with a cable attached to the front of it and the other end attached to the handle bar extension. Imagine you are seated and trying to push a box away from you with your feet – then imagine doing the same thing with your back against a wall. It’s the same principle but really it’s only really effective at lower cadences, there was a drag on the parcours at Villach but our cadences were high so it wasn’t really required. And once you’re in your crouch, that’s it – for two hours! However it’s a terrific aid to climbing a long mountain pass.

PEZ: You were favourites for the Seoul Olympics too but only finished fifth?
In the 1985 Worlds we were third behind the Russians and Czechs, then we were in second in ’86 and World Champions in ’87. In a pre-Olympic competition in Bulgaria prior to Seoul we’d put two minutes into the Russians; we were very confident and ready to win. But when we left Italy to fly to Korea, the rowing team’s equipment filled up all the space in the Jumbo Jet’s hold and our bikes were left behind because there was no room for them. We had no bikes for seven days before the race, we couldn’t train and only got our bikes the day before the race – it was a disaster. 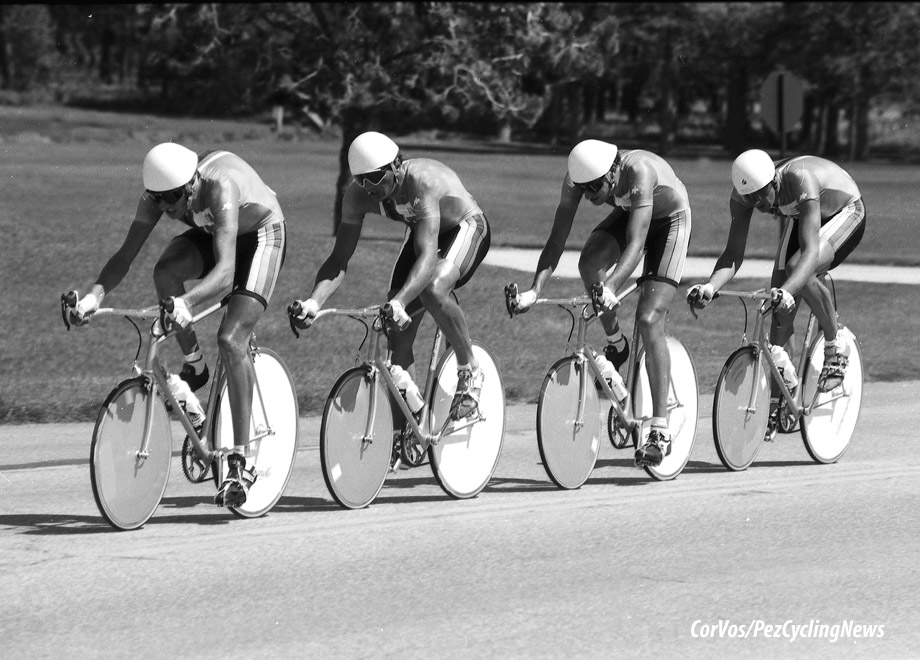 PEZ: You turned professional with Del Tongo-MG, how did that come about.
I was going to stop after Seoul, I’d met my wife there and thought I would perhaps get a job in cycling. My morale was poor after what happened in Seoul. I phoned my friend Luciano Rui who was a coach with the famous Zalf amateur team and asked if he had jobs available with the team? He suggested that I come and ride for Zalf, which I did in 1990, as lead-out man for Fabio Baldato. That’s what I did and in the Baby Giro, Fabio won four stages against Russian opposition. That got us the ride with MG-Del Tongo which was a very strong team with the likes of Franco Ballerini and Mario Cipollini, whose lead out man I became, I was his last man in the train, taking the final 500 metres. The team became GB-MG and I subsequently went with him to Mercatone Uno and then Saeco. 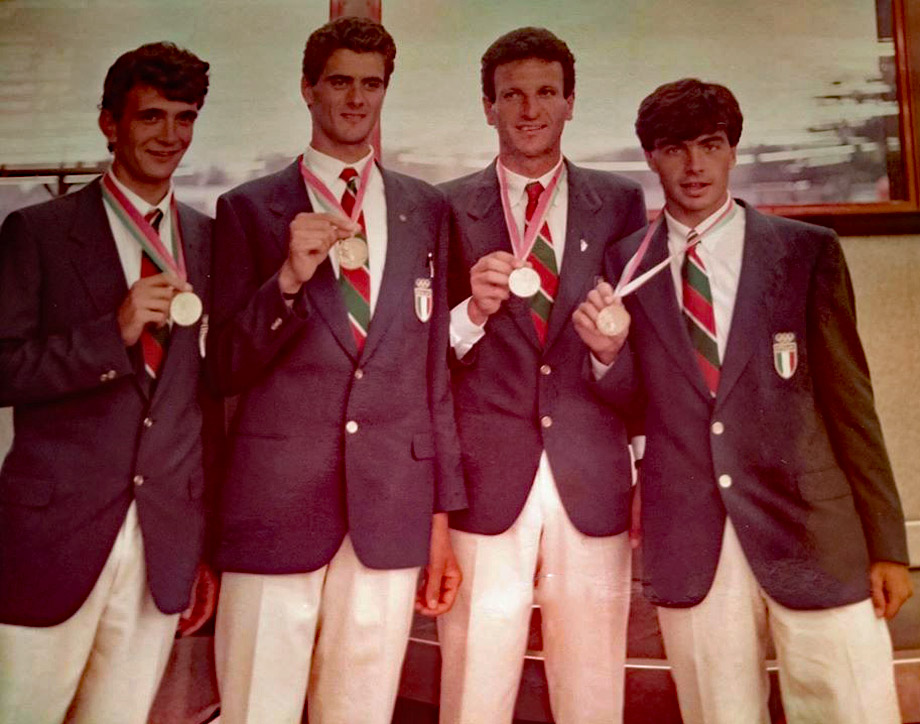 PEZ: How was your relationship with Cipollini?
In the job, we were close but not in ‘real’ life; he was very focused in his approach to his profession, training, diet – he was winning professional bike races from 1989 until 2005; that’s 17 seasons. 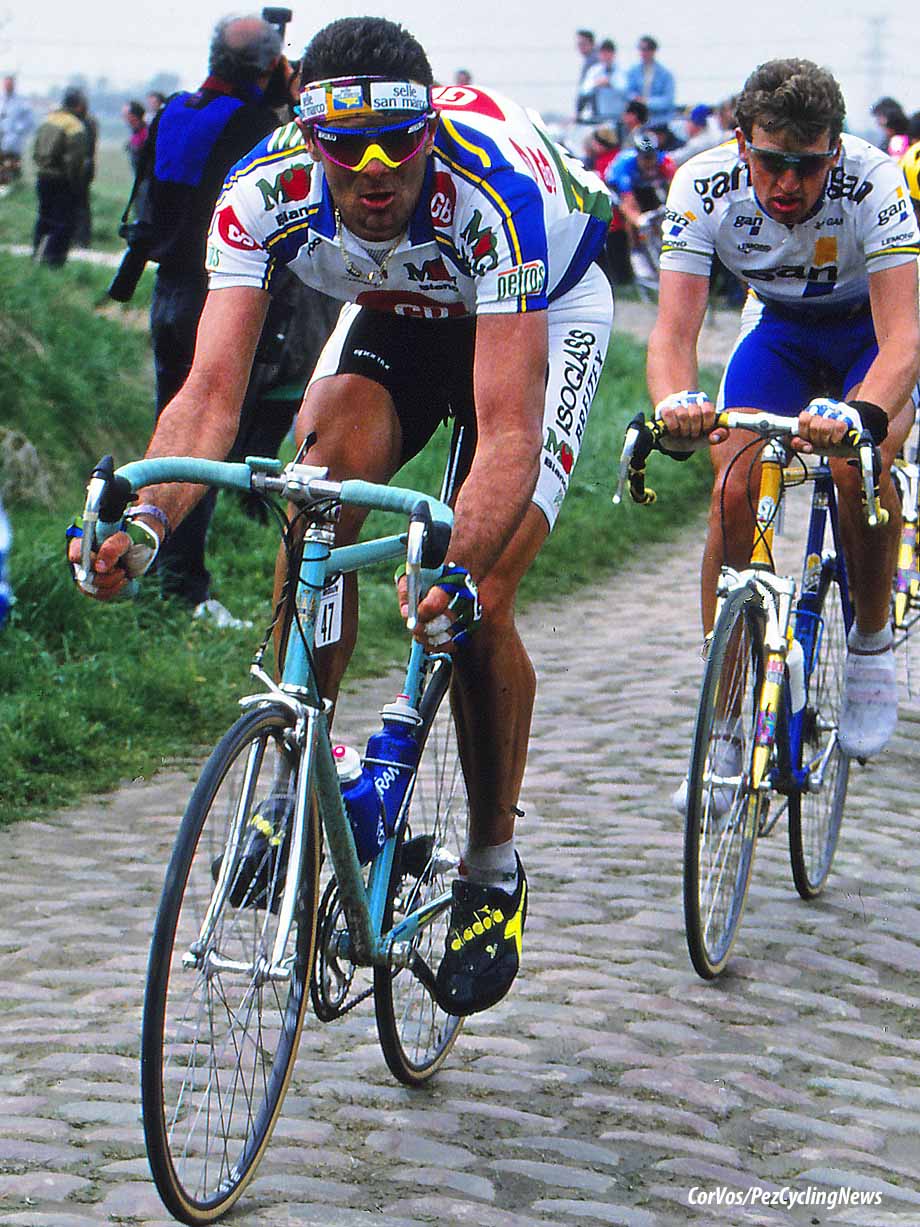 On the cobbles of Roubaix with GB-MG

PEZ: You guys were the first real exponents of the sprint ‘train.’
Yes, I don’t think there are teams now which ride like we did, we’d take it up with 20/25 K to go, the last couple of K we rode super-fast, me and riders like Mario Scirea. I used to be last man but then we brought in Silvio Martinello as last man – each year we tried to improve the strength of the train. 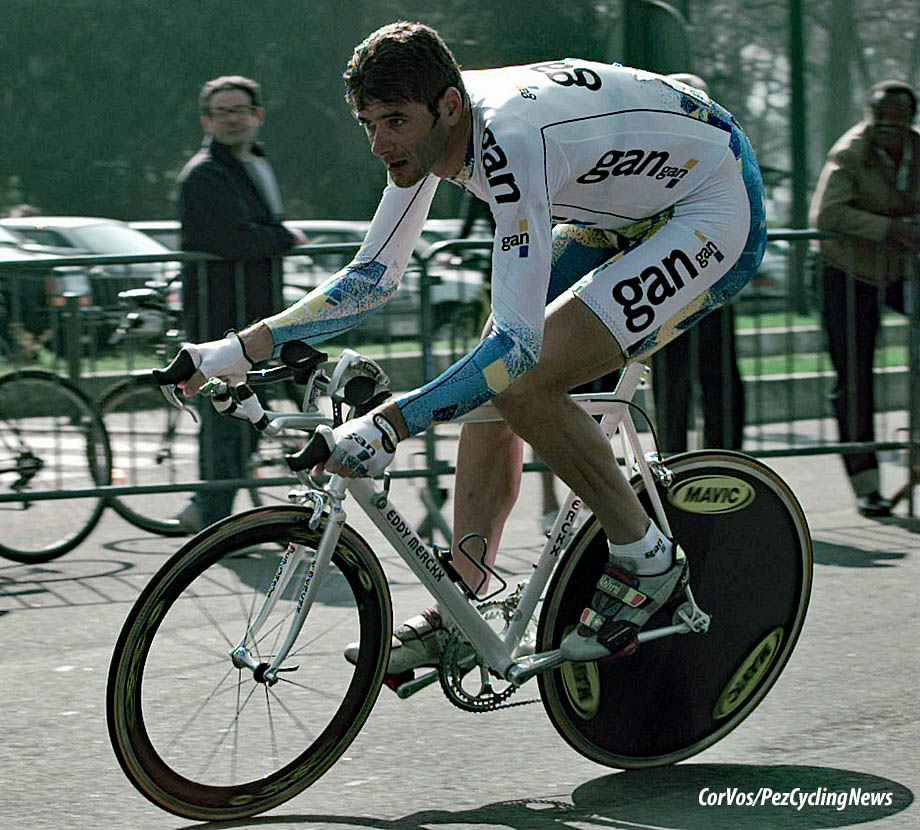 PEZ: You were six years on Italian teams then went to GAN; a French team which was unusual for an Italian in those days?
Mario didn’t keep me on at Saeco at the end of 1996, I wasn’t told until September, which was disappointing. I had no manager but was friendly with Fred Moncassin of the GAN team so I phoned Roger Legeay who was the GAN team manager and asked if there was a place for me as a lead out man for Fred and Magnus Backstedt? He said, ‘yes’ and I joined the team. I was proud to be an Italian on a French team. 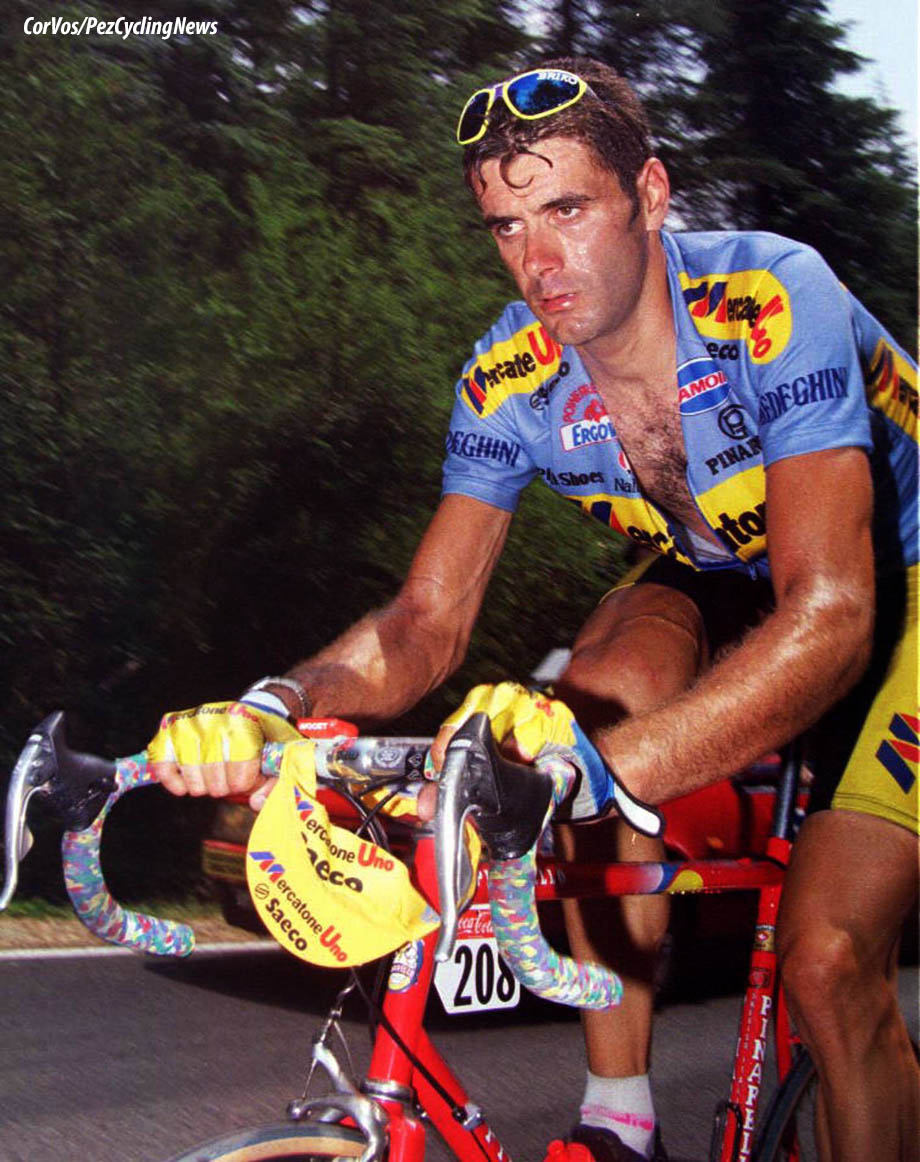 PEZ: And we must discuss your ‘exploite’ over the Ventoux, do you still get people coming up to you and asking about it?
Now more than ever! There was a list published recently of the 100 best stage victories in the history of the Tour de France and my win was included. When I go back there each year as a guide with InGamba Tours and climb that mountain I think to myself; ‘I can’t believe I won that stage up this damn thing!’ The section through the forest is just so hard with those long straights, there’s simply no respite.

PEZ: You made your calculations that day, just like you used to do as conductor of the, ‘Autobus’?
Yes, I was always one of the first to be dropped in the mountains; you lose one minute per kilometre to the leaders on the final climb of a stage, they go so damned fast; you’re riding around 15 kph but the leaders are doing 20 kph. The Ventoux was 22 K so I figured I needed 25 minutes at the base of the climb, I’d lose 22 minutes on the climb, wouldn’t lose on the descent but needed a margin of error too; I had 23:45 at the base of the climb and still had around four minutes at the top, by the time the line came it was still 3:39 so my calculations were good! 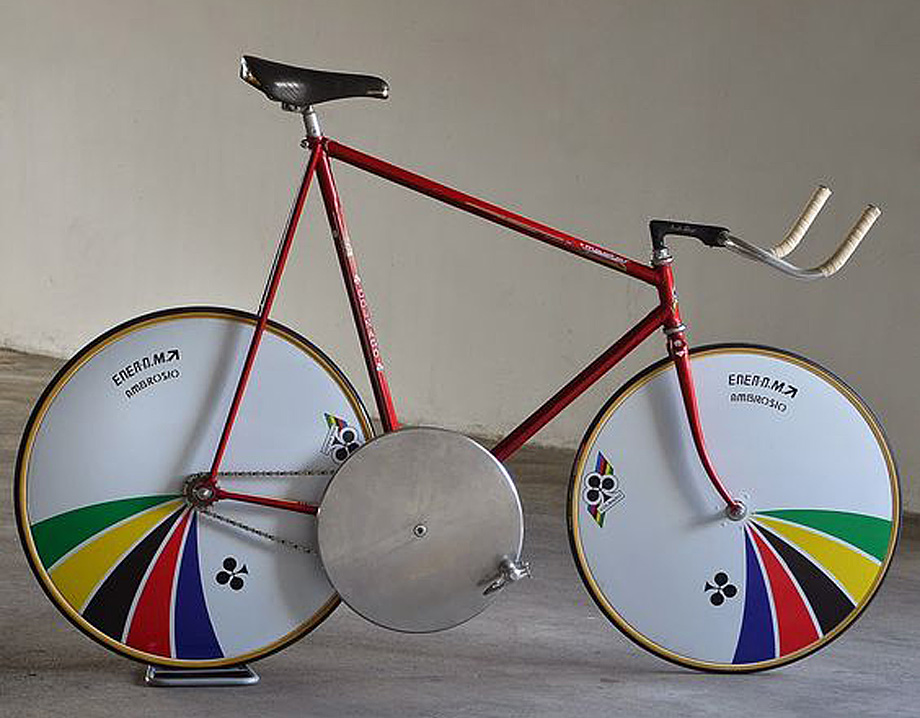 PEZ: What about these images I’ve seen of a massive Colnago track machine built for you to attempt the Hour Record?
I had sponsorship and the bike was built specially for the record in 1986; it was aero with a very narrow front hub and the drive train on the left because the bike only ever turns left [an idea adopted by Felt on the US ladies’ team pursuit bikes in 2018, ed.]. But it was a disaster, due to my physiology I suffered from compression of my urethra [the tube that connects the urinary bladder to the penis for the removal of urine and which runs through the area where a rider sits on the saddle, ed.] I had to visit hospital at the end of each season to have that attended to but on the track with the compression on the bankings it was impossible, after two kilometres it was just too painful. 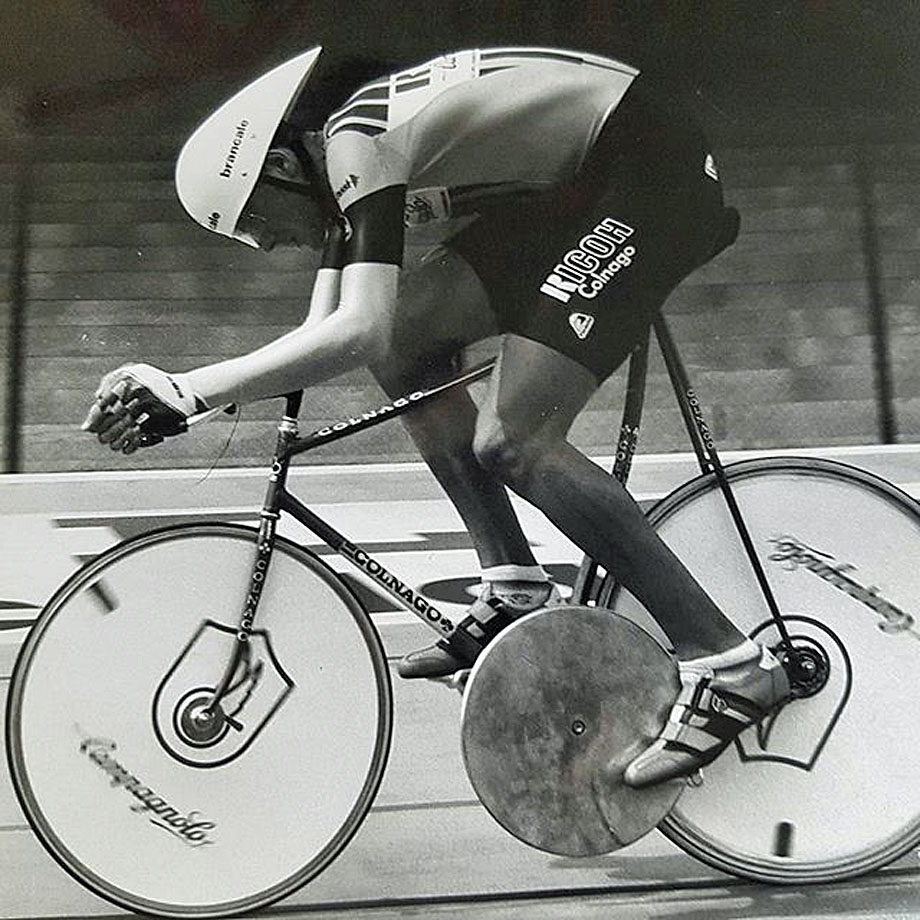 PEZ: How did you handle retirement?
I was ready for it, I ran two bars in the exhibition centre in Vicenza with my wife and sister and I’ve been driving a V.i.P. car at le Tour since 2005. I bought a bar in Verona but sold that to a Chinese guy in 2007 and went to work in insurance; but then in 2008 Fausto Pinarello asked me if I would be an ambassador for his company at the Giro. And I work with InGamba tours and go back to the Ventoux every year – but like I said, it’s not getting any easier! 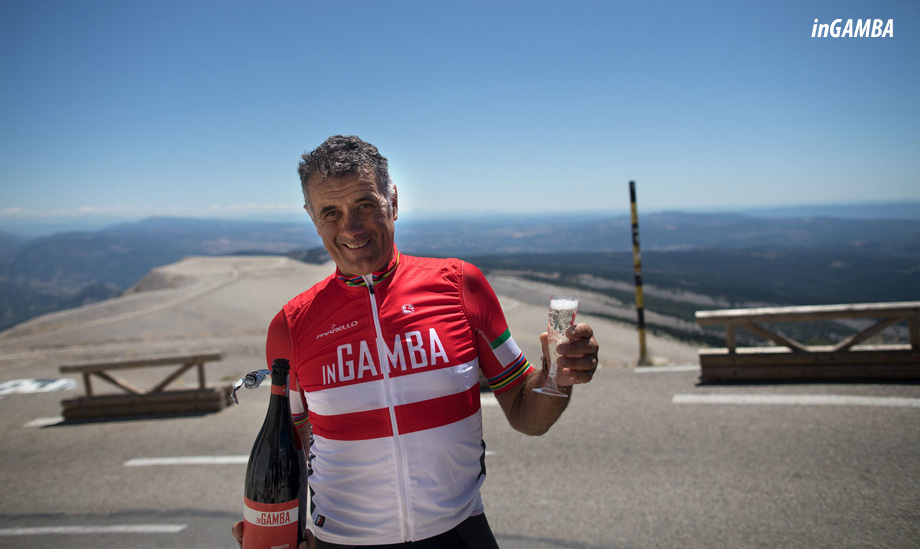 # One of the nicest things about this job is getting to converse with simpatico legends of our sport like Eros Poli. # 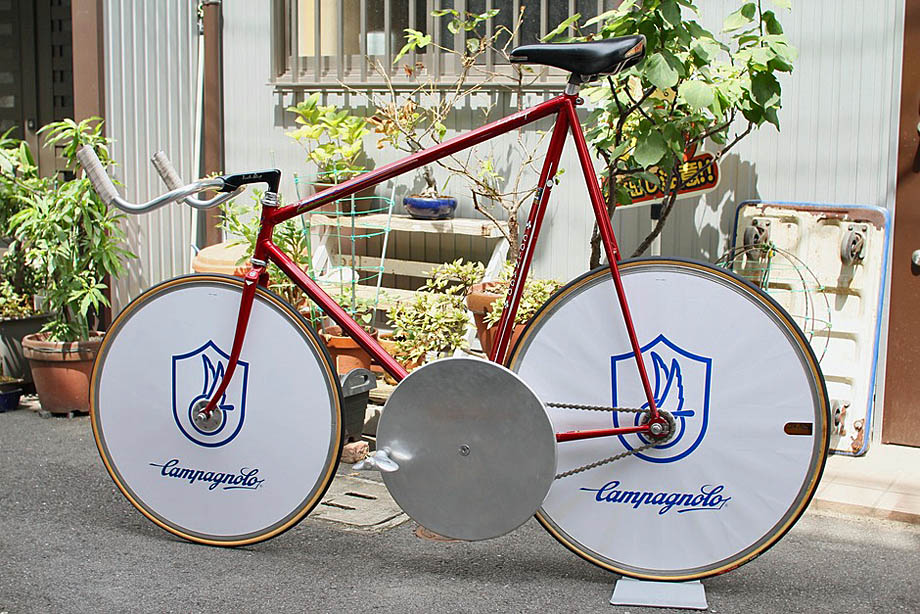