Sports Director Interview: Everybody remembers the Euskaltel-Euskadi team and the Basque riders attacking the Alpine and Pyrenean climbs clad in their emblematic orange kit. The team enlivened every Grand Tour took part in. The dream of those pioneering days has not disappeared, especially not if DS Jon Odriozola has anything to do with it. 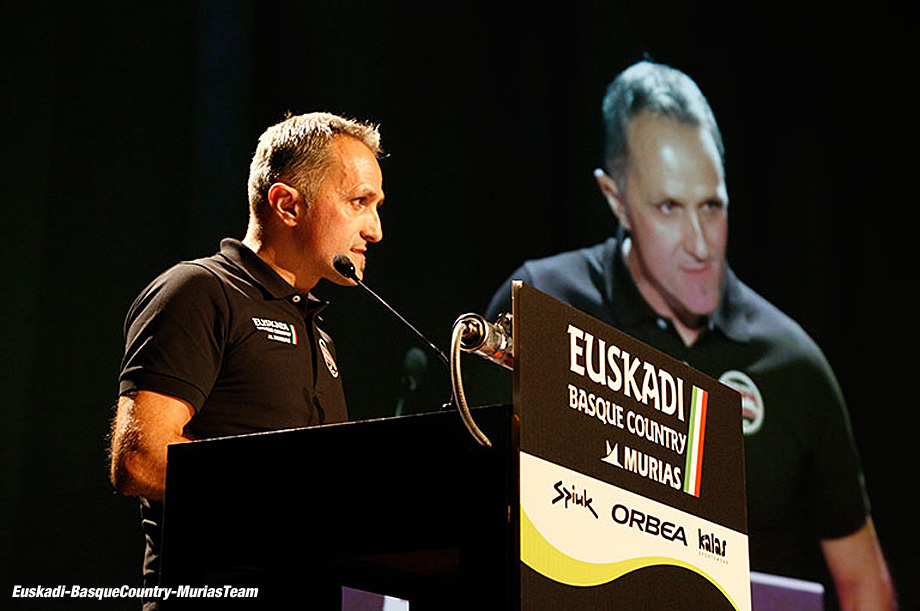 Jon Odriozola sets out his plans for the team

“Our goal is to go to the Tour de France with a team of Basque riders.”

Last May it was confirmed that the Murias-Basque Country team would make the jump up to Pro-Continental level and compete in the 2018 Vuelta España.

We sat down to talk to team founder and manager Jon Odriozola in his hometown of Oñati, deep in the heart of the Gipuzkoa region, the epicenter of Basque cycling. A former professional himself with Banesto during the golden era of Spanish cycling, Odriozola is on a mission to try and recapture the spirit in Basque cycling and return to the glories not seen since those of the Euskaltel – Euskadi years. 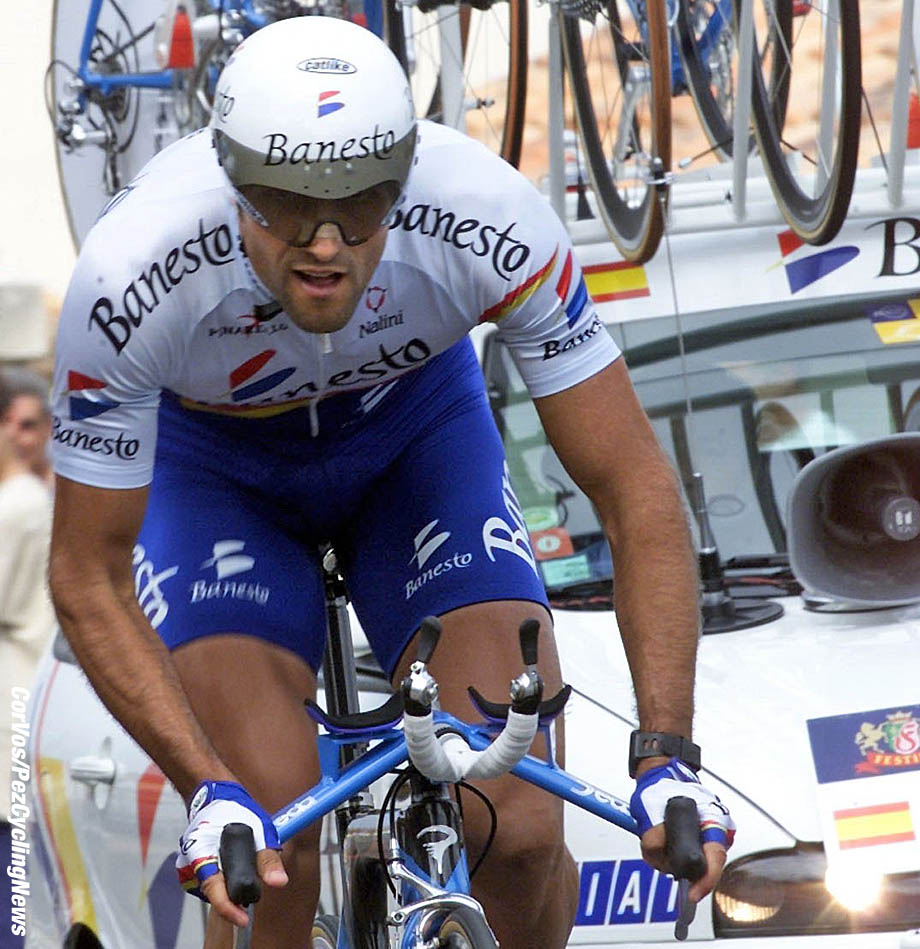 Jon Odriozola was 12th overall with Banesto in la Vuelta’98

Though many people may not know, the Murias team has been around for a few years now?
Jon Odriozola: Yes, but the thing is when you are a Continental team you are off the radar for most people. You don’t get the same attention from the media. When you are working in a World Tour team, like I was with Euskaltel-Euskadi, everything is very straightforward. You have the money and you don’t always need to be chasing people for favors. The reality of lower level cycling is very different. When you have less you have to work a lot harder to get things done. 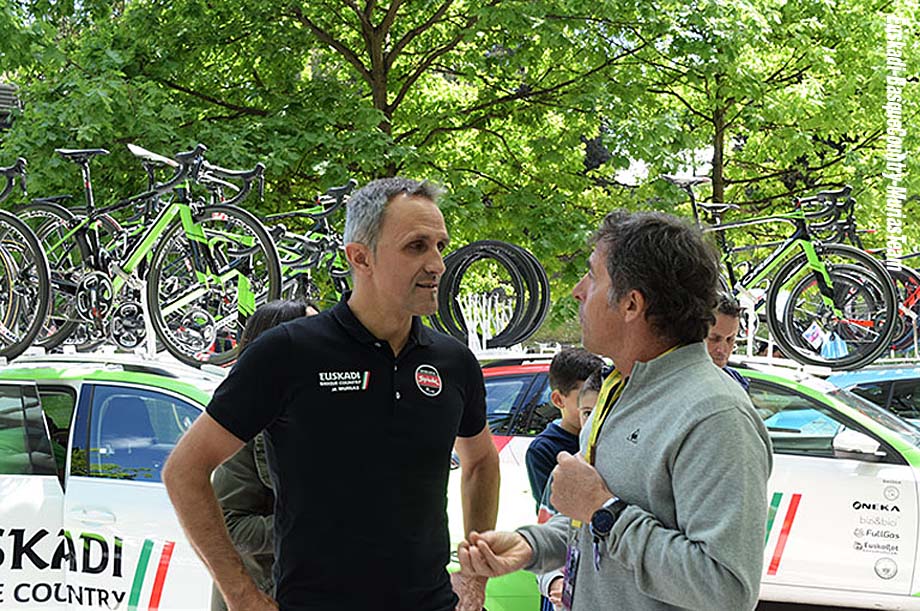 We see some of the more famous Basque riders in other teams like Mikel Landa and Mikel Nieve… will the idea be to bring them home?
This project is first and foremost to form Basque riders from a young age, to form the next Mikel Landa or Ion Izaguirre.To form riders like this takes time and we cannot promise to have riders at this level in two years time. We would love to go to the Tour de France next year with someone for the GC, but that is just not realistic. We will be a well funded team with a highly professional outlook but we will not be up there with the likes of Sky and Katusha in terms of budget, for us that is not our aim.

Our aim is to create future champions and bring them to the Tour de France and put Basque cycling back on the map. It is not just a cycling team, it will be a project that we feel can capture the spirit of the people whether they are cycling fans or not. 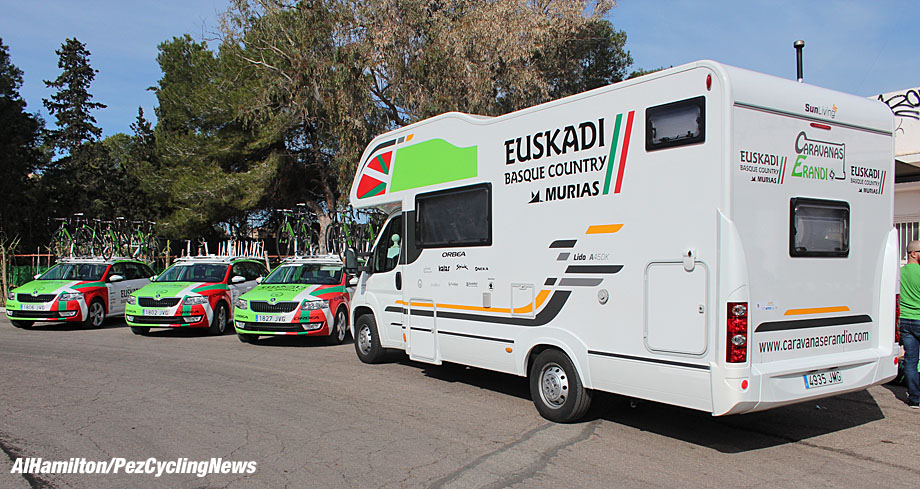 The team (vehicles) line-up for the Vuelta a Valencia

Is it a problem that Continental level teams are “invisible” as you say?
I believe that Continental teams should only exist as development or associate teams linked with Pro-continental or World Tour teams. In my opinion it should be treated strictly as a level for under-23 riders between amateur and professional. It is a level that provides a key section of the pyramid between amateur and reaching the top levels of pro cycling. 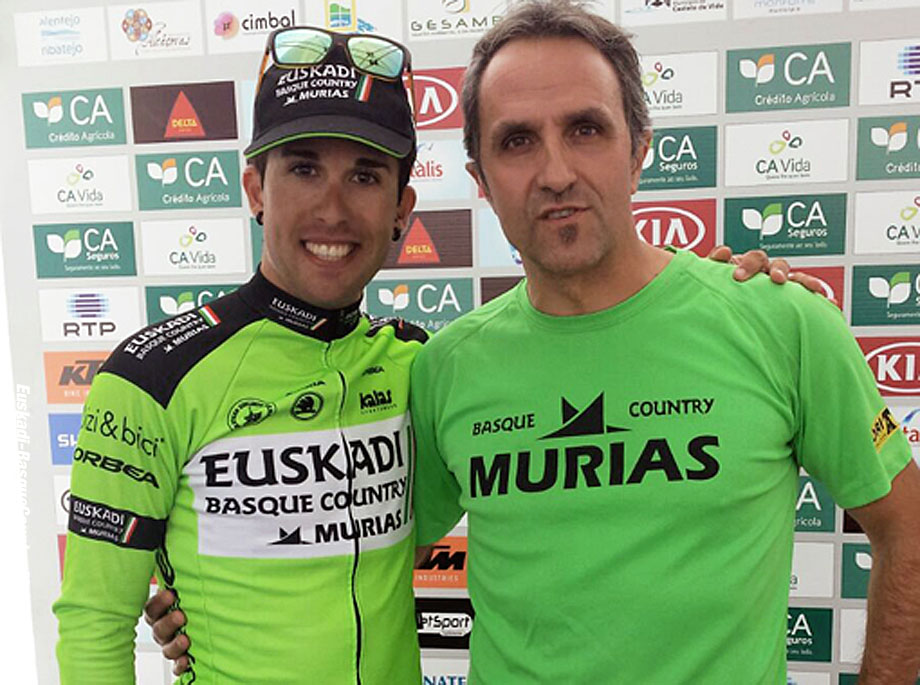 So do you think there should be an age limit on riders competing at Continental level?
Yes, I definitely think so. Though perhaps it is not so straightforward. For example sometimes you have riders who are finishing their studies who have not yet fully had the chance to realize their full potential. In such a case it is dangerous to put an age limit of 22 or 23, because for sure there are riders who are 25 who are still progressing and developing as riders.

However it is clear that Continental level cycling should not be for a thirty-something rider who has previously been at World Tour level. That is not a healthy trend. 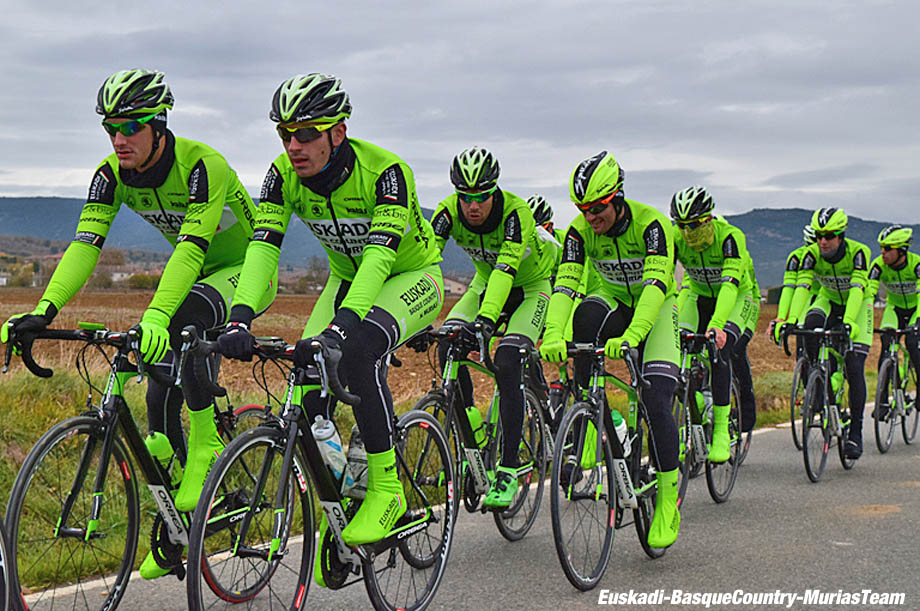 Winter training for the team

Will the team be made up of strictly Basque riders?
The exact details of that are still to be defined. Obviously as a Basque team the main idea is for the project to focus on Basque-born riders. Of course we have also explored the option to accept riders who have had their formation as cyclists in the Basque Country or with Basque teams.This would certainly open up further possibilities in terms of signings. We will not be signing established riders from abroad, that is certain. 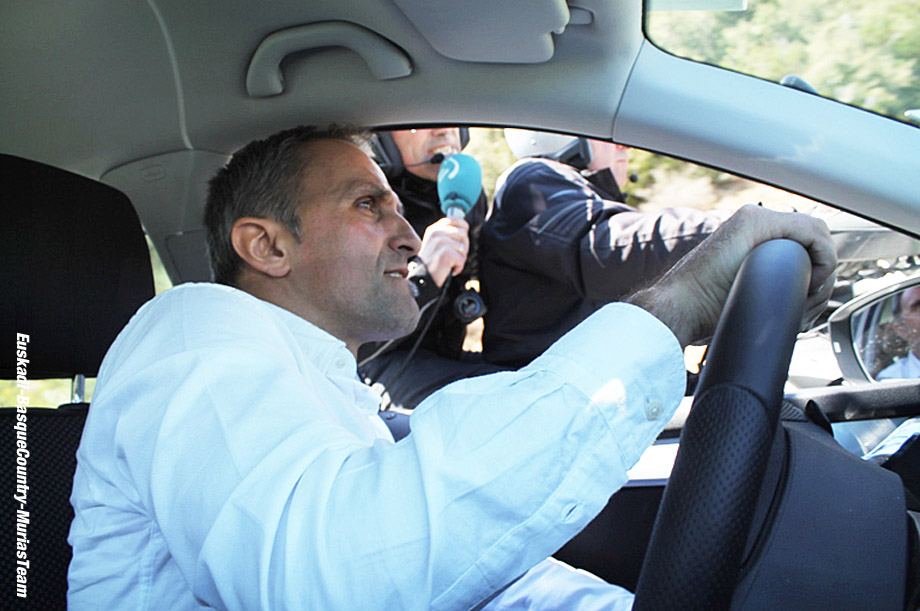 You have seen many cycling teams come and go yourself both as a rider and also as a director… what have you learned along the way?
Our goal is for this project to have longevity. If we get a big investment from a sponsor it will not be spent on a star rider, instead it will be spent to ensure the continuity of the team. We want this project to last for twenty years at least. This is why we need to be patient. We are thinking more long-term rather than short-term. Our message is very clear – we want to form riders from a young age and bring them through to compete at the top level. 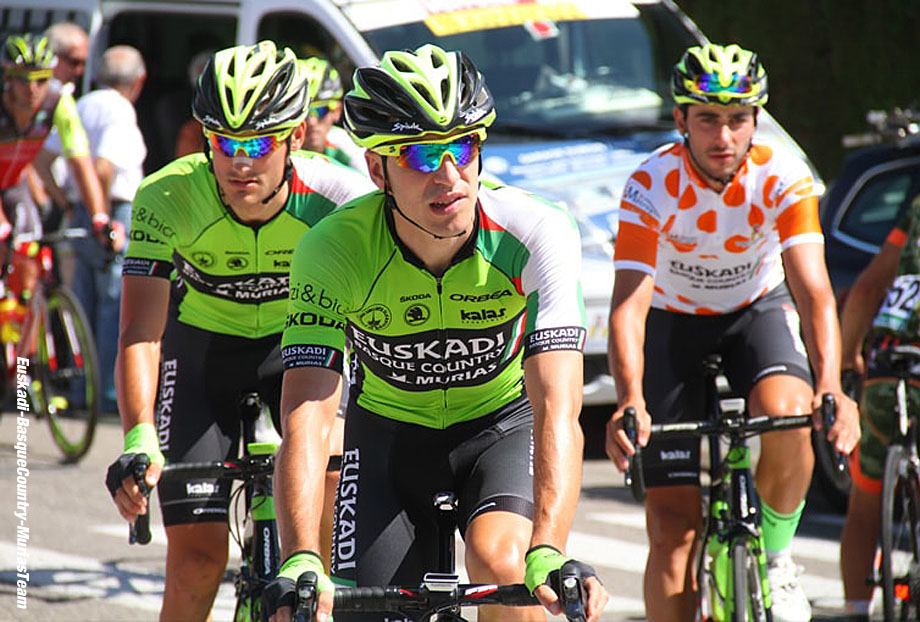 Will the long-term idea be to eventually become WorldTour?
For what we want to do I don’t think that is necessary. We want to ride the Tour de France because that race has a special place in the heart of the Basque fans. We want to be different to other teams in that regard. Though success is always welcome in any team, our philosophy does not and will not revolve around victories.

We are taking this team step by step. Murias started three years ago as a modest Continental team and will now make the jump to Pro-Continental level in 2018. Our next big goal will be to get to the Tour de France, but in four or five years from now. 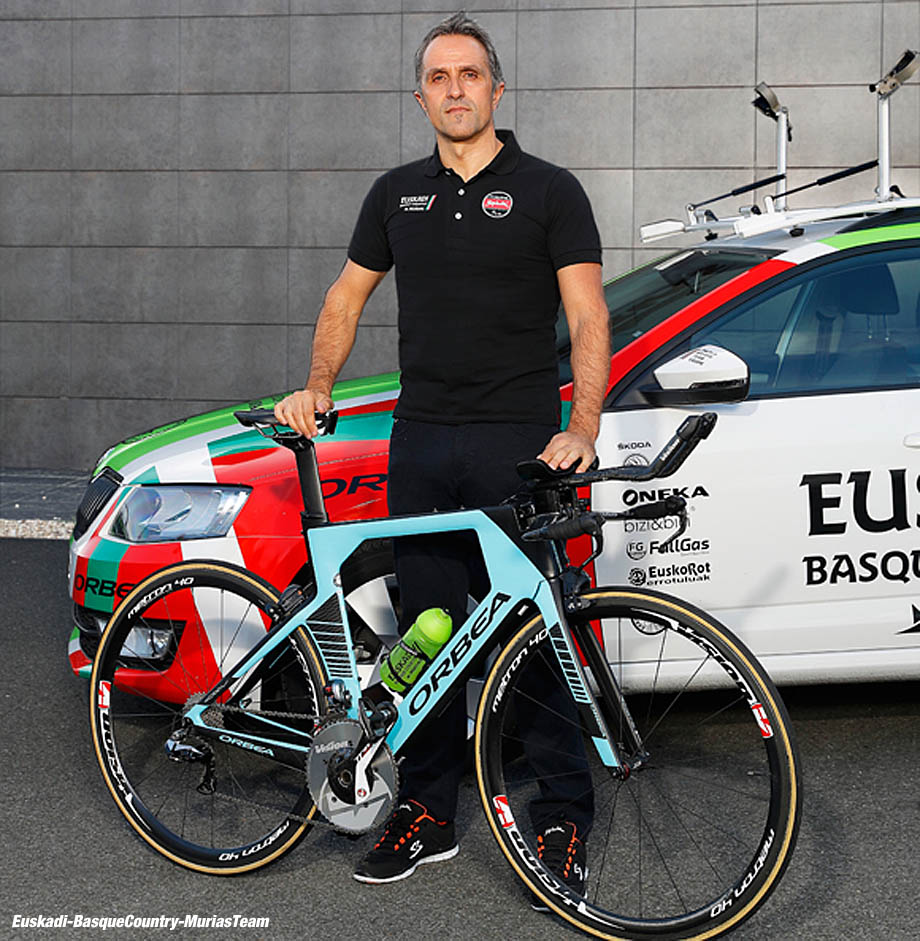 How is the search going for sponsors?
Murias will be staying with us that is certain, but we are also in talks with various other interested parties. The bigger the budget the more we can do.

I believe you have already confirmed participation for some big races for next year?
Yes, I have already met with Javier Guillén (race director) and he has guaranteed us an invitation to the Vuelta España 2018. Another important race for us is the Tour of the Basque Country which we have also been promised an invitation. These are big confidence boosters for us ahead of our first season in the pro ranks. 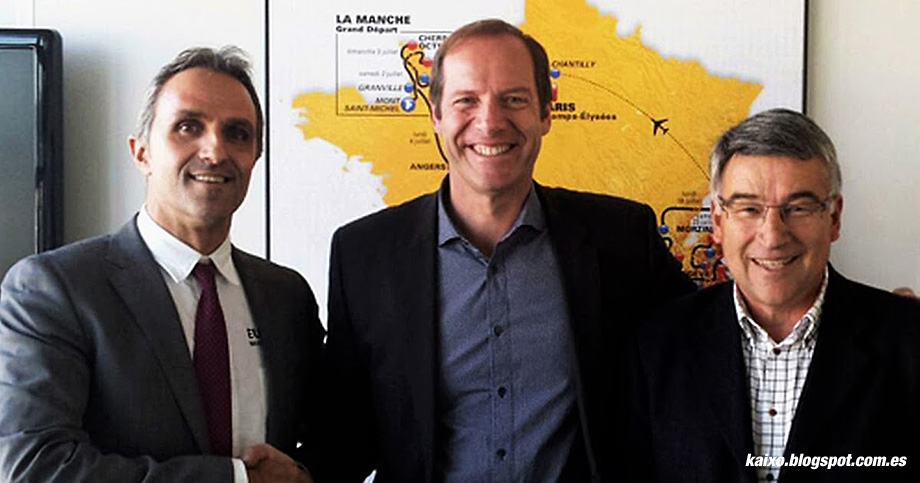 It is widely rumored that the Tour de France may be coming to the Basque Country for the Grand Depart in a few years, is that in the back of your mind?
I have met with Christian Prudhomme twice and it is true that there is an interest to bring the Tour here. If this were to materialize it would be a huge boost for our project and would be a positive step in reviving Basque cycling. We’ll see what happens.

Catch up with the Murias-Basque Country team at their website HERE. 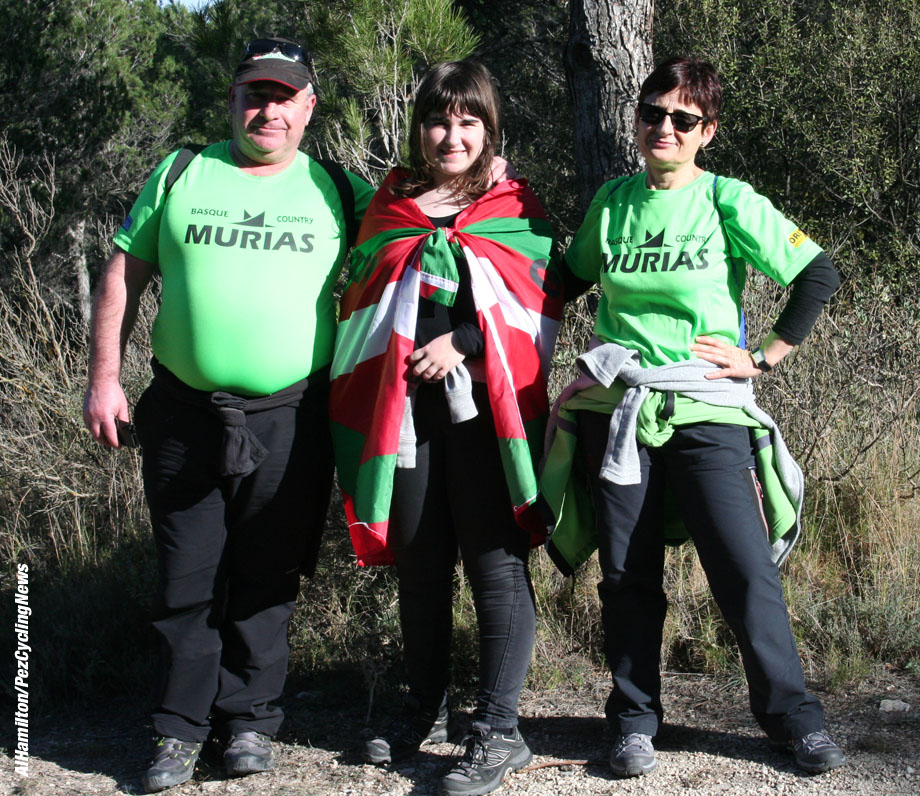 The team has a broad fanbase