– By Charles Manantan –
After doing a bit of shopping at THEPROSSTUFF.COM, it occurred to me that the person on the other end of the emails confirming my purchases was in fact Saturn Pro and current Under 23 National Road Champion Will Frischkorn, and with all the money I was spending, he might feel obligated to give me an interview! That being said, It wasn’t so much the purchasing, but the fact that Will is one of the nicest people I have come across in a sport that has it’s occasional Ego, and what transpired was more conversation than interview. I caught Will as he was about to head out the door and enjoy another off season day in Boulder Colorado and was shocked that I didn’t find him prepping for the Worlds in Zolder, but his answer was so clearly the right one. 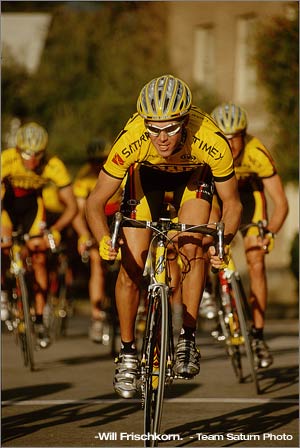 WF: Yep I am Fried at this point. The Season went really well, but has been a long one because my schedule (coming back from Injury and Illness) had me putting in a lot of effort sooner in the year than I normally do. It just wouldn’t be right for me to go to Zolder and take up a spot that should be given to someone else. I knew I wasn’t ready a couple of weeks ago when I went to do a mountain bike ride and, when made it to the trail start I was already dead… The Worlds would be a great experience without a doubt, but it wasn’t right to go just to show up.

We had a conversation for a few more minutes, and then the really important questions needed answering…

PCN: What’s the worst thing you have ever eaten as a pre race meal, either taste wise or something that just made you sick?

WF: Overcooked filthy European Pasta! No doubt about it. It so soft it sticks and you can hardly get it off the plate. That answers both parts of the question (Bad taste and makes you sick). You see so much of it that you get sick before you actually eat it. You start asking for rice!

PCN: Caffeine or no Caffeine?

WF: Both I Guess, I drink Tea some times and Maybe caffeine before a TT, But that’s about it. I don’t run from it, but I try and limit it.

PCN: I am surprised. After reading so many stories in Bike mag’s and stuff, I was under the impression that Team cars were fitted with Espresso Machines…

WF: Well it is like that to on a lot of teams to some degree, I might be the only Guy at Saturn that doesn’t drink much Coffee… I do Love Coffee Ice cream though!

PCN: Your favorite “VICE” type food during the season, something you shouldn’t eat but do (Note that Will’s Stats are 6’ 1 inches and 150 Pounds and with no weight problems, hasn’t exactly been known as the Jan Ulrich of the US pro peloton)

WF: Cookies and Ice Cream, Snickers flavored. There is a little shop here in Boulder that makes it and it’s the best!

PCN: How long is Off Season?

WF: about a month

PCN: What is your Favorite Off Season Activity?

WF: Cooking and Eating, well Cooking Really, I also Ride the Mountain bike. Cross Country Skiing is a favorite too and I lift weights. Really the Off Season is about the mental break though. It’s not so much a physical break. Just being away from the pressure of racing and preparing is great. (PCN: No joke if he is Lifting, Riding and XC skiing all the time!)

PCN: How Long Is Base Training for you and what do you do?

WF: It’s now until January Basically. I spend a lot of that time doing Tempo work, long rides at 15 beats below threshold. I also do some LT work and muscle tension. But it is always below threshold. Training here, especially at altitude, if you go over, it really cuts your time back, because your reserves get used so fast… Long distances at slower speeds, I just get out there and try and keep Tempo.

PCN: What’s your biggest win and Best win? I ask both because sometimes the biggest isn’t the best. The Under 23 National Champs is probably the biggest but…

WF: It’s probably the same for me. The under 23’s was the biggest, but to me it was the best just because it came at such a great time. Not only did the race play out perfectly for me but also because the year leading up to it was really tough and I that win was a great confirmation that I had come back from a lot.

Aside, Will had Injury illness and bad luck heaped on him like football players on a fumbled ball, and at one point had to decide if racing was for him. Obviously it was as he came back to get in a break, the crack the two other’s in the breakaway to solo in for the National Title. (Will said “I got a bit of a gap”, but because I have been one of the people that has been left behind when the guy in front of me gets a “bit of a gap”, I qualify as being able to say “Cracked”)

PCN: What are your goals for next year?

WF: I would like to do a good ride in the TT and Road Worlds. SF (The San Francisco GP) would be great as well, that is such a great race.

PCN: Is Europe a Goal?

WF: With out a Doubt!

PCN: If you could go now would you?

WF: I would wait a year. The situation I have is perfect for me with a great team at Saturn and the US Nationals I can go back and forth and get the best of both worlds (the US National under 23 team is based in Belgium and is a super program for young riders). I almost went at 19, but it is good that I didn’t go. I have a great situation and there is no need to rush into something.

PCN: How did you start THEPROSSTUFF.COM?

WF: We have the Veloswap every year here (A huge swap meet with lots of great gear) and it just got to be too much. We (Will and several other Pro’s based in Colorado) would have things like a full windtex team issue jacket and would be selling it for $45 bucks and someone would walk up and want to haggle like crazy for another 2 dollars off… It lasted a long time, and every buy became an ordeal. It is just so much easier with the site.

PCN: OK last Question, if you could be any Movie Character ever, who would you be? (Note Will needed to hit the road, so I gave him a day to respond via email)

WF: First I thought of Peter North, but I realized that he is a rather minor movie icon. I thought that many out people out there wouldn’t know who I was referring to. So instead I chose Mr. Bond, James, that is. Not so original, but he has all the fun toys, the schnazzy lifestyle and always gets the girl. Yep – couldn’t think of anything much better.

PCN Note, This is the only answer I had a problem with. Peter North is well known for his uh… “Production Value” to most of the people I know. And wait a minute, doesn’t James Bond basically have the same lifestyle as a Pro Cyclist!!!!

Some times, Interviews like this are just a pain in the ass for both parties, but this one was pretty easy. Weather or not it will be this easy in the future, is anyone guess though. Given that Will possesses a load of talent and has a level head and very young legs, It wouldn’t surprise me to see him in the European Peloton in the next couple of years. It would surprise me though is if his attitude and easygoing nature changed. Some folks just seem like they have a decent idea about what they are doing and Will is one of those people. With a couple of prime time riders coming home from Europe this year, we need a few more troops across the pond…

Do yourself a favor, and check out THEPROSSTUFF.COM. As the season winds down, they will have a pretty good selection of team wear and at reasonable prices (and if they offer a $189.00 team jacket for 45 bucks just buy the damn thing and shut up! My words not Will’s). But, note that these are pro team items (Bikes, Wheels, riding clothes, Casuals etc) and so will not be made to fit some people. Still the deals are worth looking at, as the prices are almost too right. It was a pleasure meeting Will but, as he is gathering up a complete winter Kit for me from Prime Alliance, it may turn to pain, as my wife will see a dent in our bank book … But, I can use my wife’s own ammunition against her, “It’s on sale!!!” And unlike her sale items that are 10 – 20 % off, most of the stuff at THEPROSSTUFF is closer to 75% off, and isn’t available in stores even if you were able to pay retail.