Three-time US Pro Champion Freddie Rodriguez is back from his Le Tour crash, and has been working hard to gain his top form in time to show as key leadout man for Robbie Mac this week in Spain. Freddy lets PEZ-Fans in on what he’s been up to…

JOURNAL ENTRY #1: August: Crash Recovery and Vuelta Preparation
By Fred Rodriguez
Now that I’m able to ride my bike again – I had to take 2 weeks off after my crash in the Tour de France – my main priority is getting back in shape to save the rest of my season.

Back on the bike, I gave the body an easy week to let my muscles figure things out without creating any further damage. I just want to get my legs to feel normal again. I did a couple of rides indoors on my CompuTrainer (see the PEZ Review here) to give myself a safe place and a controlled environment to see how bad my body felt.

And now that I’m riding back outdoors, I can step up my endurance training. Even though I’m a sprint specialist, road racing is an endurance sport. Sprinters are endurance athletes with a little more fast twitch in our muscle fibers than the guys who are GC contenders. This gives us the explosive power you see at the end of sprint stages. And as you saw in the Tour this year, Robbie has just that much more fast twitch than other sprinters! 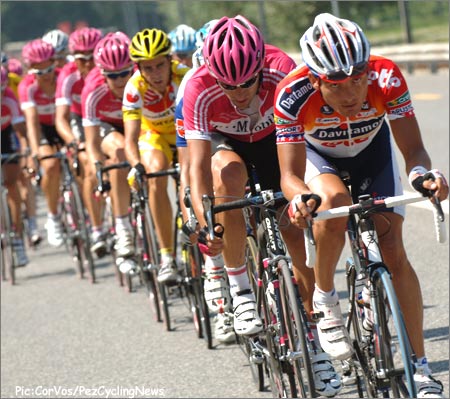 Freddy shows the bunch a thing about riding ‘rythm’ at the ’06 Tour de Suisse.

But the thing is, you can’t really train the fast twitch. You have to train for endurance and power. A typical schedule includes several tests on the CompuTrainer to judge my endurance, intensity and pedal stroke, and then interval training. My trainer has a specific protocol based on increases of power output every 10 minutes. At the same time we control the lactate to see the build-up with each load. In the end, it gives me the heart rate and power outputs I need to concentrate on for my interval training. The more I test, the better control I have of my training effort, which needs to get me to peak during my next race–but not before it.

One of my secrets is training the rhythm of my pedal stroke, rather than just the power. This is something I test using SpinScan, which is actually one of my favorite things about CompuTrainer. Every race puts different stresses on the muscles, depending on the stage’s profile, length, strategies, etc. Now, on top of that, I injured my hip that I always crash on. It is really important to make sure I’m not compensating for muscles that should be working all the way around my pedal stroke. On the road, it’s easy to forget the balance in the pedal stroke. SpinScan helps me get it dialed in when I’m in a controlled indoor environment.

The setup gives me a clean plate, without outside variables. Then, I can keep recreating the same scenario with the same variables as far as my bike, the course, the temperature, wind, lack of cars, etc. And then I can set objectives for my interval and endurance training. The race is the final test…

The Vuelta is the big one coming up. I used the four first stages of Eneco tour for getting some race training. After that I will just rest for 6 days. It’s a long race so it’s better to come in fresh than over-trained.

The Vuelta is special because it’s like racing at home. Even though this year we don’t go into my region [Girona] I still feel close to home. I have also had some good successes in the past with many Top three finishes. For the first week, I’ll be pulling Robbie to the line. After that, I’ll be looking for a Vuelta win!

• Stay tuned for more form Freddy as the Vuelta rolls here on PEZ, and check out the CompuTrainer website here
• FredRodriguez.com here