Fleche – Wallonne and ‘fairy tale’ in the same breath? It’s an unusual sentence construction but in 1987 it was justified. Larger than life, self-made millionaire Tony Capper was campaigning his British ANC squad across Europe towards his dream of competing in the Tour de France before he disappeared in a welter of unpaid bills and gossip.

Not A Fairy Tale Start
Team morale wasn’t the best after a hard baptism of fire on the continent, but it would be better after the finish of the Fleche.

A former British junior cyclo-cross champion with a third place in the 1985 Milk Race and a pedigree as a good climber, Paul Watson was 24 when he lined-up for the start at Spa on an overcast but mild day. He explains; ‘It was all new to us, we didn’t know what to expect and the first time we hit the narrow 25% Mur de Huy it was chaos, there was a crash and the race split, I was caught and had to put my foot down. 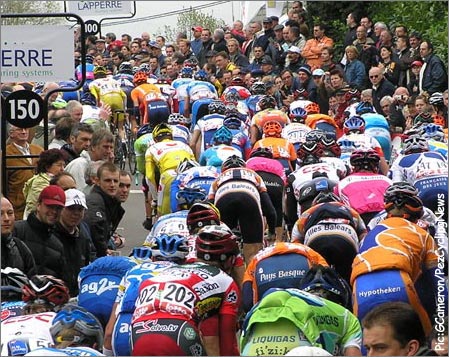 The Muur De Huy was and still is the decisive point in the race.

Following The Right Wheel
All hell was let loose as the riders delayed in the crash tried to get back. Sean Kelly [Kas & Ireland] screamed past me and I managed to get on his wheel. Kelly dragged me back up and just as we got back on he swung over – I had such momentum off his wheel that I just kept going.

It wasn’t a pre-determined move or anything it just seemed like a good move to make.

Two Systeme U guys were up the road and I bridged-up to them; we rode a full circuit together. [The two were – Yvon Madiot, brother of two-time Paris-Roubaix winner Marc and a good rider in his own right, he was French pro champion in 1986, the team-mate was Eric Boyer who rode the Tour seven times – ed.]

Right Place, Right Time
On the second climb of Huy I lead all the way up, we didn’t hang about but I was able to ride at a steady tempo, we had dropped Boyer by this time and over the top five riders came up to us.’

The five riders were – Claude Criquielion, twice winner of the Fleche [85 & 89] and world champion in 1984 – Belgium & Hitachi; Stephen Roche, winner of an amazing ‘treble’ in 1987 the Giro, Tour and Worlds – Ireland & Carrera; Rolf Golz, a great amateur pursuiter who won the Fleche in 1988 – Germany & Superconfex; Jean Claude Leclerq, 1985 French pro champion – Toshiba, plus a revitalised Boyer. 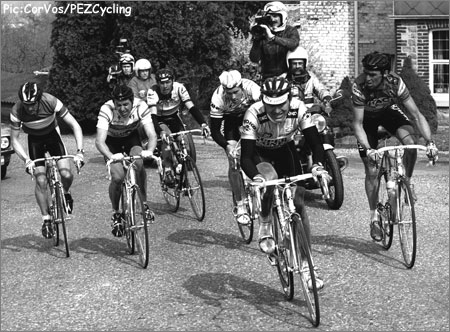 Paul Watson rode himself into a star-studded break that fateful April day.

All Was Great, Until…
Paul continues; ‘It was like a dream being in that break with those guys, I was riding along thinking – “wow! look those helicopters up there” – the other guys in the break were shouting at me to concentrate on my riding!’
The last lap saw Paul with good legs; ‘I felt good but then I broke a spoke in my back wheel, I couldn’t even think about a change at that stage because the attacks were starting.

Roche and Criqueilion were playing cat and mouse and Leclerque clipped off, I could have fetched him back, no question, but I didn’t think it was down to me.

The finish was at the top of the Mur and the burst spoke was a real problem going up there, without that I would definitely have finished higher. Leclerque won, Criquielion clipped away for second, Golz did the same to take third, Roche was fourth, Madiot was fifth and I was sixth.’

Gateway To Bigger Things
Watson’s ride was a sensation, an unheard of rider from a small British team in at the death of a classic, a great story for the press. On the strength of this ride Watson got a contract with Criquielion’s team for 1988.

That’s where the punch-line comes, Paul remembers; ‘Claude said to me, “Were you working for Roche last year at the Fleche?” I said that I wasn’t and Claude said; “That’s a pity I thought with you being English you would have been working for an Irish guy, I would have paid you well to work for me.”

• Be sure to watch 2006 Fleche-Wallone live in North America Wednesday on Cycling.tv