Join us now for another Pez-clusive “Slam-Dunc” interview – ! We told you he was coming, and some of you even sent in your own questions for the best thing to happen to Italian cycling in years – so grab a coffee and settle that butt in for a chat with Franco Ballerini…

I consider myself a lucky man when I receive an invite to spend time with a real gentleman who has won two Parigi-Roubaix, arrived eight times in the first ten and once, by a cats whisker beaten into second place by Gilbert Duclos-Lassalle. His credits as a cyclist do not end there – he has recently been the man that transformed the Italian National Team into a perfect working machine to win with Mario Cipollini the World Championships in Zolder. 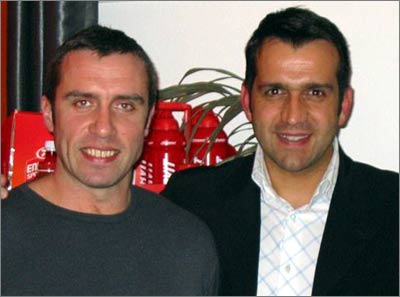 APERTIVI
Name: Franco Ballerini
Best Result? Parigi.Roubaix 1995
Best day in cycling? 1987…I won the Tre Valle Varesine, it was my first win as a neo-pro. My future in cycling was looking grim, as my contract with my team was coming to an end and I had received no other offers. Winning this gave me a place in the National Team and of course after the Worlds the offers came flooding in.

First race? 1973 in a local race near Florence

Which bike do you own and ride now? Colnago Carbon

PER PRIMI
DS – As a rider, is it more important an Olympic Gold or a Stage win in the Tour or Giro?
FB – Winning the Tour or Giro is more important but just a stage…mmmmm…depends how you win the stage… I would say an Olympic gold. (note.Franco did also say that he thought the elimination of amateur cycling from the Olympics was wrong as it was the maximum for an amateur cyclist and the perfect moment to get noticed for aspiring Professionals.)

DS – Where do you keep the Parigi-Roubaix trophies?
FB – At home in a cabinet with two lights shinning on them!!

DS – When a rider what did you eat for Breakfast?
FB – I love breakfast! I ate everything, it was the most important meal of the day for me, yoghurt, cereal, bread, anything sweet!

DS – Favourite Food?
FB – Apart from breakfast it has to be Pasta. When we travel as a team we always have a stock of Pasta, Olive Oil and Parmigiano cheese with us!

DS – Most liked foreign country?
FB – I like an easy quiet life, so I’ll say Canada but I also enjoy Florida!

DS – What would you have been if you weren’t a cyclist?
FB – I would have probably have studied more but I would have liked to have worked in Sales or Promotion anything that has contact with people.

DS – Did your future after being a cyclist worry you?
FB – Yes a little, but when I announced my retirement I received quite a few offers. I believe that any sportsman that sacrifices what they do to arrive to their maximum level is capable of applying that dedication into another job or project. 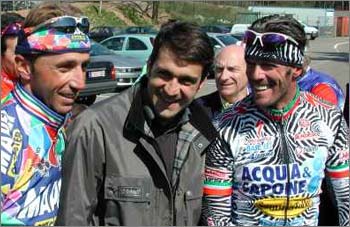 Franco was all smiles even before the Zolder race last year…

AS ITALIAN TEAM MANAGER
DS – What does a National Team Manager do throughout the year?
FB – A lot of Promotional work, especially with children. (Note: we have agreed to do an article on “A week with Franco Ballerini” to understand the real work of Franco and what happens in the build up to the World Championships in Hamilton)

DS – What do you think of the USA racing calendar and do you think that it is a good starting ground for young Italian cyclists?
FB – It’s a different kind of race program in the States and there are some great races but you could win 20 races in the States a not be noticed, win one race in Italy and it is noticed world wide. That’s the difference, but the organisation is correct plus having a perfect role model in Lance Armstrong will help things move along.

DS – If you could give an Italian Passport to any foreign rider to ride in the Worlds in Hamilton for Italy ,Who would it be?
FB – I don’t think we need anybody else, Italy has the best one day riders in the World, it’s embarrassing the choice I have but if I had to give it to someone …it would have to be Armstrong.

DS – You have seen the course in Hamilton, what do you think of it?
FB – It’s tough, very tough as there are no flat to recover, it’s up or down, go once around the circuit it doesn’t seem that tough but do it 20 times and it will hurt. The last hill before the down hill to the finish will be the decider, anybody getting to the top with a bit of advantage I don’t think will be beaten.

DS – Do you see any similarities between the Grand Prix De Montreal which you won in 1990 and the course for the Worlds in Hamilton?
FB – Montreal was easier and gave you more time to recover and was shorter.

DS – Which Italian riders does it favour?
FB – Lots. Any rider with a change of pace that knows how to ride the classics.

DS – Last year the strongest rider for the Worlds was without doubt Cipollini, did this make the choice and organising the team easier?
FB – Organising was much easier but picking the team was very difficult as I had to leave some good important riders at home and that isn’t easy. What it did do though was make the chosen 12 feel proud of cycling for Italy and they worked hard as individuals and as a team.

DS – With so many talented Italian one day cyclists, what problems could it cause when picking the National team?
FB – It won’t be easy, but Zolder was text book cycling that many have learnt from, including me, so I will try to pick well to create the same atmosphere and I’m sure any 12 that are picked will do their job as stated.

DS – How do you solve the problem of picking a captain with so many capable and wanting to win?
FB – That will be decided nearer the time as I will have to see how all Italians are, not only physical but also mentally. Everybody will be considered.

MEANWHILE…
DS – Pantani’s chance of a Podium finish, if he rides the TDF…..1-10?
FB – 5…Marco is a talent but you have to train that talent to be with the rest at the right moment to express that talent. We will have to see how he has trained.

DS – If you were challenged by Duncan and you had to choice one of these six things listed below,which would you choice:100mtrs feet first swim race, 18 holes of golf, game of squash, game of marbles, skipping for half an hour with the least amount of stops, a 20min headstart on any climb of your choice?
FB – Swim against you is out of the question…marbles no, golf no, skipping no, 20mins on a mountain is a lot …mmmmmm no because when I call you, you are always on the rollers, it will have to be Squash, yes I’ll challenge you at Squash.

DS – Can you eat a doughnut without licking your lips?
FB – No.

ON FAMOUS RIDERS
DS – What is the first word that comes into your head when I say Museeuw?
FB – Willing!

DS – Being a well dressed Italian man yourself, any tips for Armstrong to improve his style sense?
FB – No. Dressing is a personal thing and part of the person’s personality. Not everyone likes the Italian way of dressing. It’s a matter of taste.

DS – Moser or Saronni ?
FB – Both ! Moser because he was the reason why I developed a love for the Parigi-Roubaix. When I was little I was waiting for a prize ceremony in a local bar after a local race and it was delayed because everybody wanted to watch on television Moser enter in to the Velodrome on his own to win the Parigi-Roubaix.I still remember it now as if was yesterday. Saronni because he was my Maestro, he taught me everything to do with cycling, on a bike and off.

DS – Do you think that George Hincapie has what it takes to win the Parigi.Roubaix?
FB – Oh yes, without doubt. You must remember these type of races you have to be beaten to learn how to win!

DS – What did Coppi do for Italian cycling that nobody else has done?
FB – It was a different type of cycling then and people had different values. What he did do was promote Italy in the world as it was the only way of communication.

AND WHAT ABOUT?
DS – The ride of the year 2002?
FB – I’m biased as I will say Zolder as it was perfect from what ever angle you looked at it. Without being biased I will say Museeuw at the Parigi-Roubaix not only for how he rode it but also for what he went through the year before.

DS – Who do you see as the new hot Italian rider to emerge this year?
FB – Daniele Bennati

DS – There are many problems with security with other sports, is it a problem for cyclists being completely exposed?
FB – No, the top races are well organised the problem is road safety with junior racing. This is a big problem. In Italy we need more cycle paths and cycle circuits to race with no cars. (note; Franco and Paola Pezzo are promoting a bike school for schools in Italy)

DS – I would have liked to have asked many more questions, as from a man like this we can only learn. He was great fun, a real gentleman and explained everything in great detail. I would like to thank Roberta from [email protected] (www.primanext.it) you were wonderful!