We all know American riders Greg LeMond, Lance Armstrong, Andy Hampsten and Davis Phinney because they have won the big races. Have you ever thought about the riders who have suffered to help these guys win the Tour de France or the Giro D’Italia? Rob MacNeil spoke with Frankie Andreu who knows how to suffer while helping Lance Armstrong secure the Maillot Jaune – more than once.

Frankie may not have won the Tour de France, Paris Roubaix or a World Title but he finished them all (several times) and that is something that many riders cannot say. Any rider who can finish 9 Tours knows a thing or two about bike racing. It was sort of weird talking to Frankie as I will always remember racing against him at various events in the US and Canada. Whenever the all powerful 7-Eleven team arrived we always knew it would be both a painful day and one in which no prize money would be coming home with us. 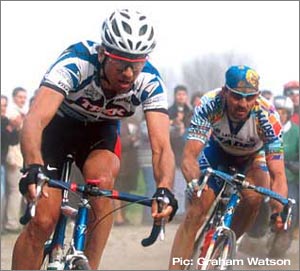 Rob: You were on the first European-based professional American team which eventually led to a team like USPS. How does that make you feel to be a racing pioneer for the US?

Frankie: I don’t feel like a pioneer. I was sort of in the second wave. I consider the
first wave to be the riders that rode the Giro for the first time with 7-11. Guys like
Phinney, Kiefel, Roll, Pierce, Hampsten etc. Actually the first wave before them would have been Boyer, or Mount. I joined 7-11 in 1984 and racing with these guys was a tremendous honor and very intimidating at first. I was very lucky to have an American team to start things out with and to learn with. Ochowicz, the manager/director of the team, was patient with me and Noel Dejonkeer, director of the team, structured my racing program to not kill me at first. I believe this was very different from how other teams worked. I was not allowed to race big races like Paris-Nice, the Tour de France for a couple years. This mentality of nurturing the riders is what I believe has allowed riders like Hincapie, Livingston, Armstrong, Julich to be so successful now. They had the talent but maybe not at the age of twenty-two.

Rob: Do you wish anything had gone differently?

Frankie: I can’t say I have any regrets. I had great teams, great teammates, most of them my true friends, and a lot of fun. My only regret which I tried like hell not to make a regret was not being able to win a Tour stage. I came so close and tried so damn hard many, many times. 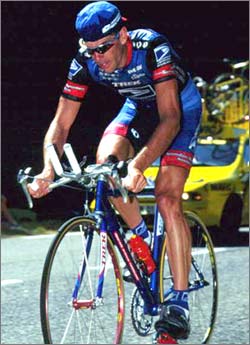 Rob: What was the hardest day of racing ever for you?

Frankie: Many days were hard, especially the Paris-Roubaix’s. The one day that I will never forget is the 2000 Tour stage to Briancon. At least I think it was to Briancon? The stage was 250 kilometers and the first three hours were flat and fast through the valleys. Then we had three very long and very hard climbs. My job was to ride tempo on the first climbs. It was very windy and I killed myself setting pace up the first climb. At the top I blew after giving everything! I then had to find a way to get in the gruppetto and survive to the finish. The problem was the time cut was not very long and the mountains were all at the end of the stage so even the gruppetto was going hard. I hung on for dear life and finished but I was blown. I couldn’t even get my shoes off, I couldn’t talk, I was dead. I was rooming with George Hincapie and after the race he told me he had never seen me so wasted. I recovered ok for the next day but I was never really good the rest of the race. The amount of times that I suffered, got dropped, came back to the group, dropped, suffered, and returned are endless. There are many days that I can remember that all play out the same.

Rob: What are you doing now?

Frankie: Now I’m working for OLN for the Tour de France and doing some business motivation and leadership presentations. I am writing twice monthly updates on the USPS team on their website www.uspsprocycling.com. I also do some cycling camps on the side. I would love to get back into the directing, I do miss being part of a racing team. My next project is that I am putting on a racing training camp/clinic in Orlando Florida on May 9,10,11th. You can find information on my website www.frankieandreu.com

Frankie: Honestly, it’s the TREK. They are light, stiff and fast. It’s the only bikes I
bothered keeping. I mean when you step on the pedals the bike goes, no wishy washy flex while losing power or speed.

Rob: What is your worst cycling memory?

Frankie: By far the death of Fabio Casartelli in the Tour de France. That was a horrible day and a horrible rest of the Tour for me because my thoughts always returned to that stage. I could barely pedal the bike the following day. I was breaking down crying and I couldn’t stop thinking about it for the longest time. It truly was a shock, something I never ever thought could happen.

Frankie: The 1999 Tour with Lance. I never thought I would be part of a winning Tour de France team. I used to watch Banesto year after year on the front and never knew how they could do that day after day. The magic of the yellow jersey truly presented itself to our team in 1999. Everyone thought we would crack in the mountains and would not be able to help Lance. It was very special proving everyone wrong and riding into Paris with Lance in Yellow.

Rob: You raced with some of the greatest riders of all time like Bernard Hinault, Greg LeMond, Sean Kelly, and Miguel Indurain. Did you ever dread when these guys rode to the front of the peloton?

Frankie: I have thought about this a lot, I got to ride with many legends. I missed out on Hinault and this is the one only rider I wish I would have had a chance to ride with. Otherwise I rode with Kelly, Indurain, LeMond, Fignon, Saronni, Museeuw, Armstrong. A heap of great riders on the top level. Also in my eyes I felt special to be able to ride with guys like Phinney, Hampsten, Bauer, Yates, and Anderson. I learned everything from racing and training with these riders once I turned pro. Probably the biggest impact on my career was Leonard Harvey Nitz when I was with 7-11. He taught me how to race, train, and act as a pro. Leonard was my idol when I first turned pro and he was a great friend and great racer. Roger Young also had a very big influence on my career. He taught me
the discipline, and the sacrifice that is needed to be successful. Again, I was very
lucky to have individuals that were willing to help me out when I first started racing at the elite level.

Rob: What should be done about drugs in cycling?

Frankie: I wish I knew the answer. The UCI has made huge steps in cleaning up the sport. What the riders need to realize is that they also need to make changes so the sport of cycling stays alive. Sponsors are rare to find and they sure don’t want to get involved if the doping scandals continue. I feel like the Italians are the worst, they just don’t listen, don’t care, and seem to do what ever they want. They alone might kill the sport. The UCI has urine tests, blood tests, in competition testing, and out of competition testing. Riders get tested many, many times over during the year. I think it’s a positive step that they do this but it’s not a positive statement about cycling.

Thank you Frankie. Now if you live close to Florida and want to learn how to be a better rider/racer check out Frankie’s camp/clinic on May 9-11th. More info can be found on his website https://www.frankieandreu.com.

Homeboy: Settling In To Belgium