Frankly Frankie: The Worst of Times?

He had the guts to tell the truth about his own doping, but like they say in racing – you can’t win until you know how to lose, and 2006 has been a year of considerable ‘loss’ for Frankie Andreu. He’s not outta cycling by a long shot, and regardless of what some folks might want, he’s joined the anti-dope crusade big time. Frankie layed it on the line for PEZ with some frank discussion.

We caught up with Frankie in Marin County, California, where he was brought in by the local ZTeaM (www.zteamcycling.com) to speak about the Tour de France, drugs in cycling, and the future of the sport. Frankie was amazingly frank with Pez.

Actual photo of Bob conducting this actual interview with Frankie.

THE BEST OF TIMES, THE WORST OF TIMES
PEZ: A year ago at this time, could you ever have imagined how 2006 would have gone for you? This has been the best of times, and the worst of times, hasn’t it?

FA: Lately I’ve only been considering it the worst of times. I haven’t really considered it much of the best of times. The first part of the year was good. I was working with the Toyota team, which was great and things were fine. And then things kind of got more complicated. All of a sudden, the SCA case with Armstrong came around [NOTE: In a legal dispute over whether Lance was owed a $5 million bonus from SCA Promotions for winning in the Tour de France 2004, Frankie and his wife Betsy testified that Lance told them that he had used performance-enhancing drugs], and then the whole thing with Floyd (Landis), and then me making the decision to come out and talk about EPO use in 1999. So, it’s been a complicated year.

PEZ: Let’s go back to the Tour of California, which was obviously a big deal here in America. You’re with the Toyota United team, and J.J. Haedo has an incredible week. That’s got to be the highlight of the year for you.

FA: Putting together that whole team, talking with other riders and convincing them to come out for this team, and making a good team, that meant a lot to me. Getting the results was important, but I knew that once I got the right riders to be on that team, that was going to come. J.J. was sensational, no doubt about it, and the other guys were great too, in getting him into that position. And after that, things kept going well, with the Tour de Georgia and watching Chris Baldwin and Justin England, and with Tony Cruz getting better at the end of the year, so it was a lot of fun, for sure.

Frankie has become a regular and welcome part of OLN’s Tour coverage.

PEZ: And then you go to the Tour de France, you work with OLN TV over there. But when you come back from the Tour, things start to change.

FA: Yeah. I was fired from Toyota United when I got back from the Tour, and just before that was when all the SCA documents were leaked. I don’t know how all of those documents got out there because all of that stuff was supposed to be confidential and secret. OLN was fantastic because they still brought me over to the Tour, they believed in me, and I owe them a big dept of gratitude for that. On the same hand, there’s Toyota United. I got back from the Tour and they fired me.

PEZ: Do you think those events were related at all, your coming clean and being honest on the record, did that have anything to do with the split with Toyota United?

FA: I don’t know. Sure, there was a lot of publicity going on with that, and of course they say no, but I don’t necessarily believe that. Because I did nothing wrong, and I worked hard to put together that team. So I was very upset about it. But I’m moving on, and I’ve got a lot of time to ride my bike, and I did a couple of local races, and got fit again because I wasn’t riding too much before that. And now I’m moving toward some different avenues. 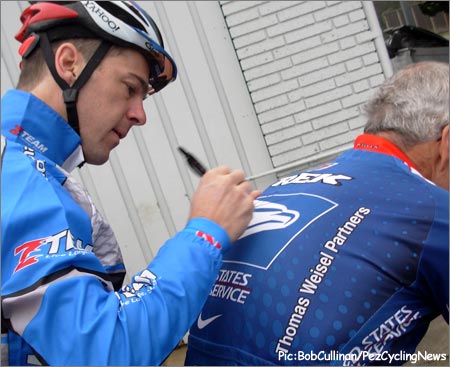 If you need proof of Frankie’s popularity – just ask the fans.

COMING CLEAN
PEZ: Your decision to talk to the New York Times (about his own personal doping)…was that a conscious decision, or did that just kind of come up?

FA: It kinda came up. The New York Times was coming out to do an article on myself and my wife regarding the SCA case, because our character was getting ripped into so much. A lot of mean things were being said. So we started talking about that, and obviously doping in the sport comes up, but I did not call the New York Times to have them come out for me to talk about the EPO use. During that conversation, talking about different athletes, she (Times reporter Juliet Macur) turned and asked me point-blank if I had ever used any performance-enhancing drugs, and it was kind of a make or break point there. I sat there and I paused for a while, and I thought, should I continue to say the lies like everybody else, or should I come up with the truth and just be honest about it? So I told the truth there, and then maybe five seconds afterward, I was like, holy sheesh! What did I do? But I’m glad. The sport’s been in a lot of trouble, and I’m trying to make it better. Right now, I’m working with a couple programs like ACE, which is the Agency for Cycling Ethics (www.agencyforcyclingethics.org), trying to establish come baseline testing and longitudinal testing to monitor athletes. They just need to be more transparent because I don’t think we can trust some things that have happened in the past. So, we’re trying to bring that trust, and the sport, back up to a respectable level.

PEZ: I would think that in your work in television it would be difficult to talk about the other guys doping, knowing what you know about yourself. So to come clean probably gives you more credibility out there, more freedom to be on the record and honest about what’s going on.

FA: That was a big part of it. When I was asked that question, going through my mind was that I had spoken about the whole Floyd thing that was going on, the Tyler Hamilton thing, the Operation Puerto stuff, and I ended up speaking a lot about the problems and the doping in the sport. And in my head, I knew that I had done something wrong in the past too, and here I am saying that we need to clean up the sport and we need to make it better…and I didn’t feel that was right. I couldn’t keep speaking on those terms and being critical of everybody else if I had done the same wrong thing. So I felt it was better to come out and admit to it, so then I could have a more clear conscious when I’m speaking about this, and trying to make things better. And that was my goal. I didn’t have an agenda, I didn’t write a book. My goal was to try and clean things up and make the sport better. I spoke about the past, and I got criticized by people saying, “What’s the point about speaking about the past?” But that’s when I raced. That’s when I was involved. I can’t speak about the present, because I’ve been out of the sport for five years. So the point is to make people change, moving forward. I don’t care about the past, or to have anybody else talk about the past, but change what you’re doing now, change your views, and try to make things better moving forward.

PEZ: Given your testimony against Lance, and his subsequent reaction, is having Lance ‘against’ you a detriment to your moving forward?

FA: He holds grudges against a lot of people, but Lance was a big part of my life early on. Then once I retired I directed for the team for two years, and once I left that in 2002, we didn’t cross paths. He wasn’t a concern of mine, and we never really spoke that much at all, really. So he wasn’t a factor at all. And the only thing that came up now is because of that SCA case, and I think I was already on his not-good-guy list, so what’s the difference?

FA: I’m concentrating more on doing the media stuff. Race announcing, television, hopefully working with some of the bigger events that we’re going to have here. Of course I’d love to return with “Versus” which is the old OLN, for the Tour de France, so that’s kind of what I’m looking for. The team thing I loved, but being able to put together the team in the right way was really a big bonus, or an advantage, for me. So I’m not really pursuing that right now. Maybe down the line, if things were right, and I could put together a good group, then it could be something that I’m interested in. With these programs that I’m working with, we’re trying to get teams to take more control of their athletes with ACE. Jonathan Vaughters with Slipstream Sports, the old TIAA-CREF team, they’re one of the first teams to sign up, and we’re trying to get some more teams to help control things.

Thanks again to Frankie for being open and ‘holding nothing back’. You can check out his website at FrankieAndreu.com.

Toolbox: Building the Base