French Star of the 80’s and 90’s Bruno Cornillet Gets PEZ’d!

Ex Rider Interview: The 80’s and the 90’s were one of the golden times of cycle racing with Hinault, Fignon, Indurain, Lemond and many more. Bruno Cornillet was no big hitter, but he worked for some of the biggest names and built up a fine palmarès in a difficult time to take wins. Ed Hood caught up with the now pilot to hear his story. 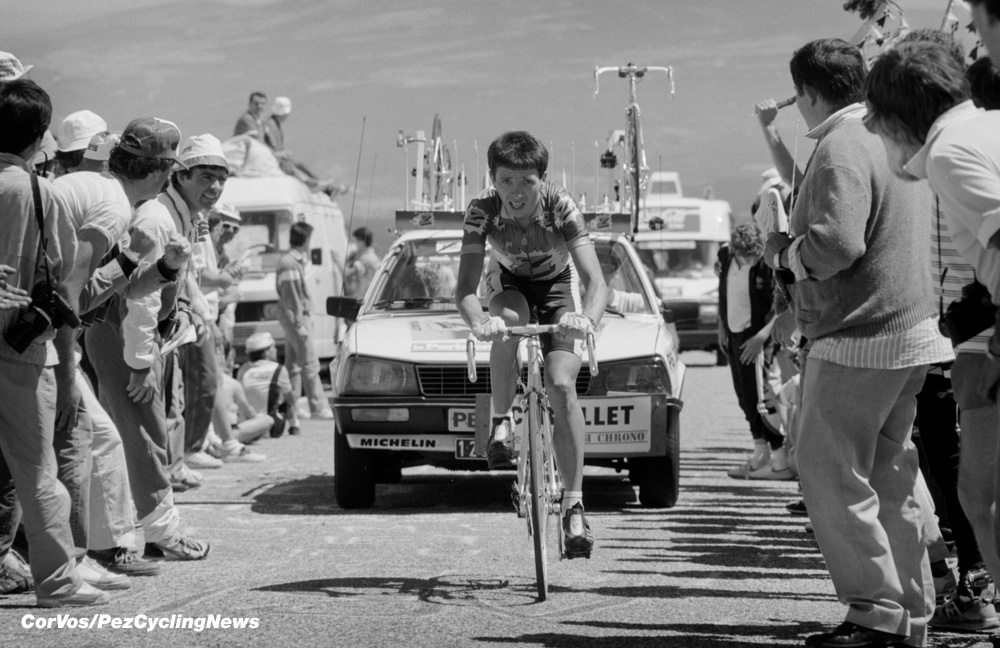 He rode for some of the most famous teams of the 80’s and 90’s, alongside some of the sport’s most famous names – fellow Breton, Bernard Hinault, Gilbert Duclos-Lassalle, Greg Lemond, Viatcheslav Ekimov. . . 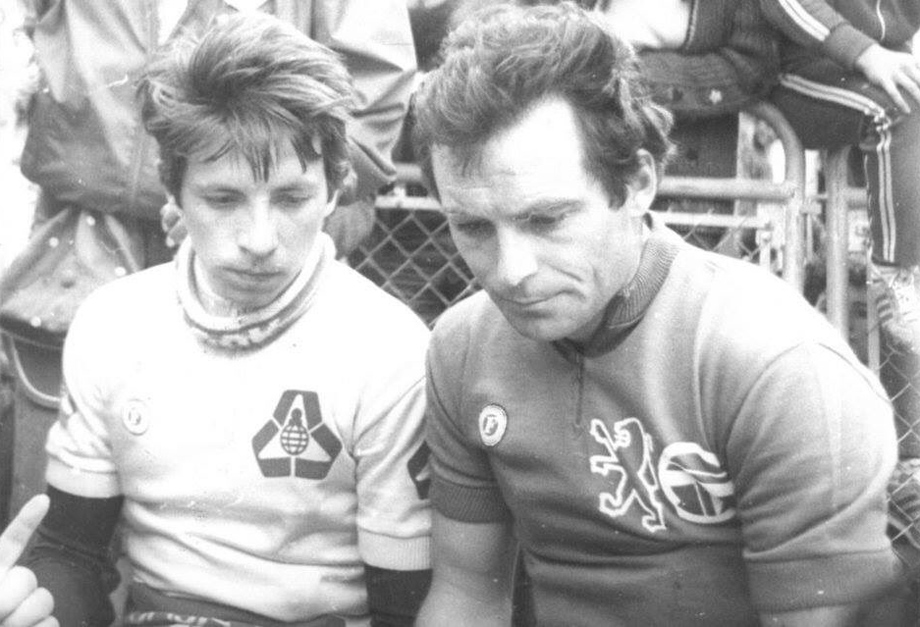 Along the way he scored some big wins including the cult GP Ouest France Plouay and Circuit de la Sarthe among some 24 professional victories. The palmarès ‘bible,’ GOTHA describes him thus; ‘A versatile cyclist with a lot of regularity. He distinguished himself both in smaller stage races and semi-classics.’ Monsieur Bruno Cornillet. 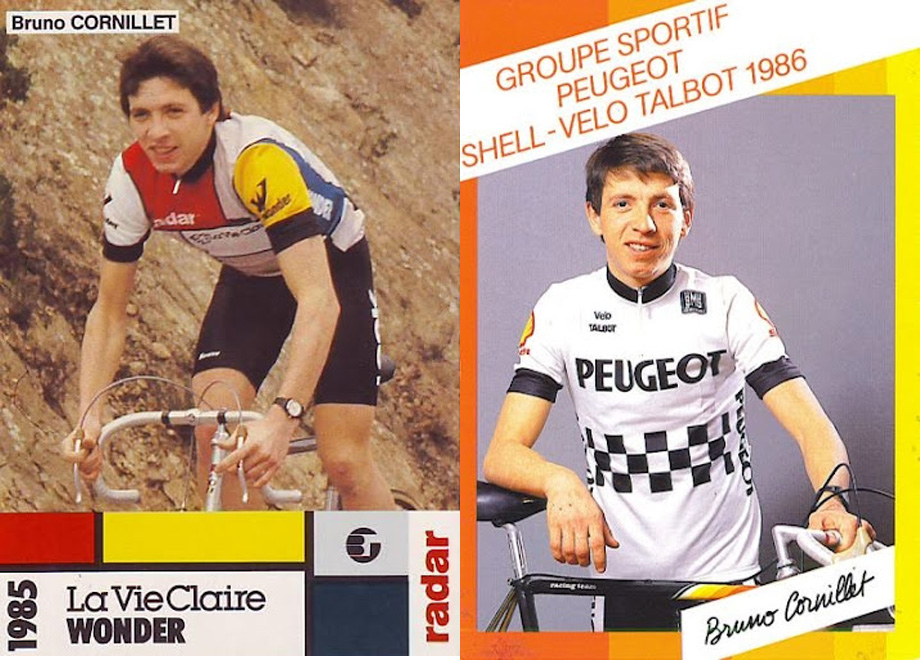 Our first question was how he came to get his first pro contract with not just some second division outfit but with Bernard Tapie’s legendary La Vie Claire team for 1984 alongside the likes of all-time great, Bernard Hinault, Milan-Sanremo winner, Marc Gomez and Tour de France, King of the Mountains, Bernard Vallet?
Bruno Cornillet: I was pretty young, just 19 years-old and at that age you had to do your one year military service but I had some good results after the ’83 Worlds including making the podium in the Chrono des Nations. The team wanted to bring on some young French talent and I got the ride.

PEZ: Your 1984 debut season was strong.
Yes, I won a stage and the GC in the Tour of Valencia was on the GC podium at the Dunkerque Four Day and was third in Paris-Camembert. It was down to the new training methods – including interval training – which our coach, the Swiss former professional rider, Paul Kochli introduced, I responded well to them. 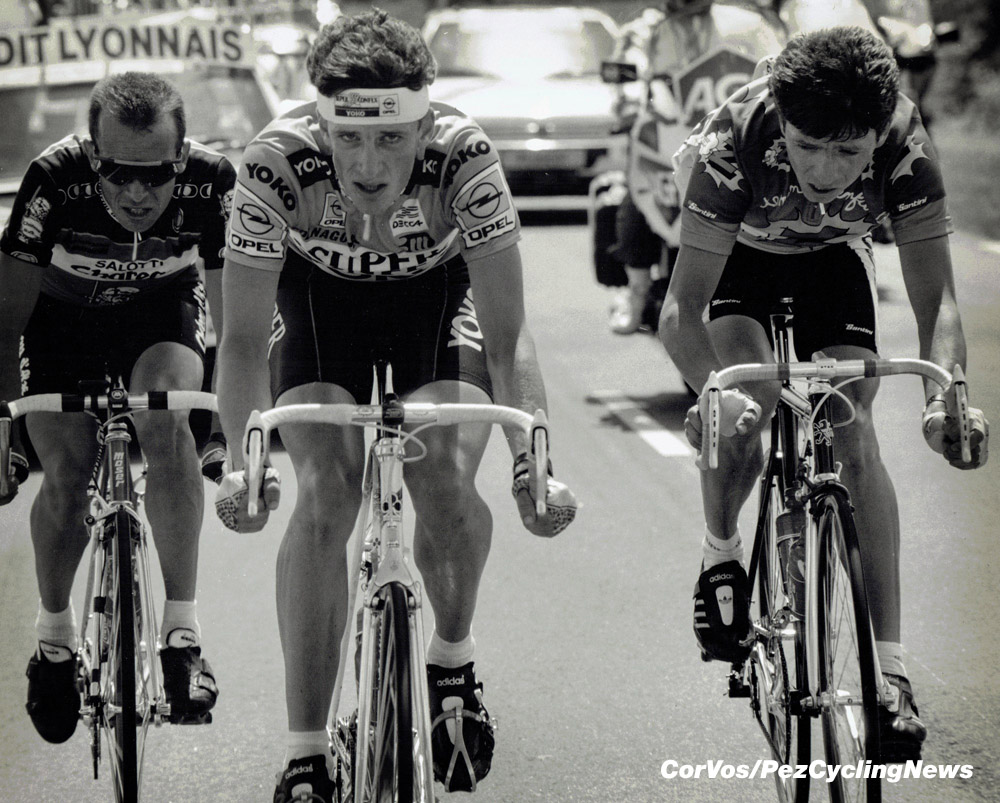 PEZ: The famous French entrepreneur, Bernard Tapie was behind that team.
Yes, and he was a very good motivator, an inspiration to the riders on the team, he would regularly attend the races.

PEZ: Despite solid results in 1985 you left La Vie Claire to go to Peugeot.
The first year was great but in the second year I realised that it was not the best team for me, there were so many stars – Kim Andersen, Steve Bauer, Bernard Hinault, Greg Lemond – that it was hard to get selected for the big races where you gain experience. The training methods at Peugeot were not as good as with Paul Kochli but the change of environment did me good and I was with Peugeot for 1986. 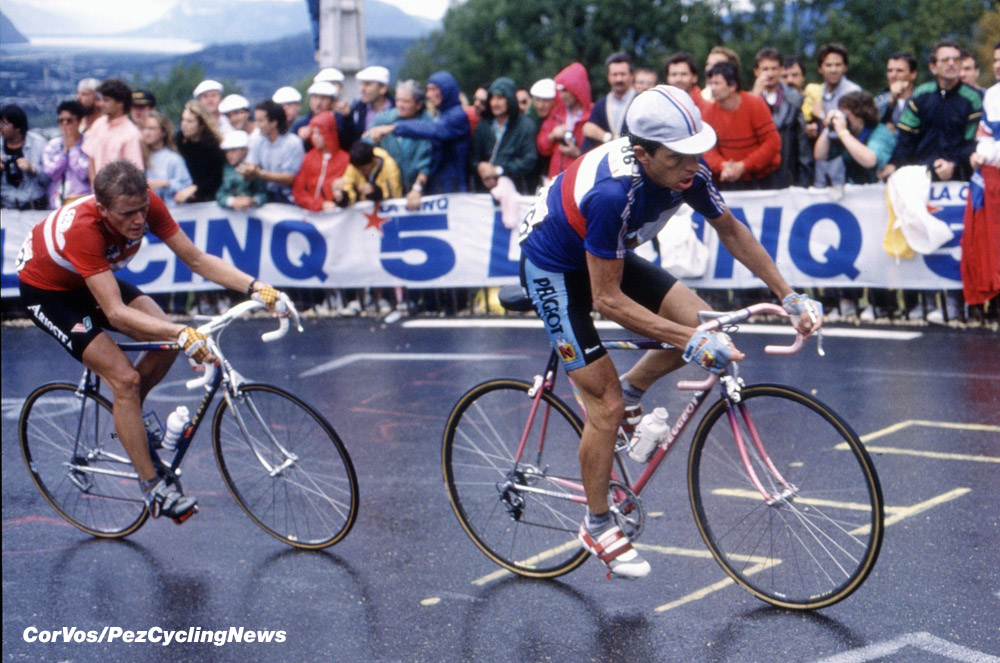 PEZ: As a Scotsman, I have to ask you about your Peugeot team mate and our nation’s greatest-ever rider, Robert Millar?
He was a very good team mate, he was involved with the team, willing to help but also a winner – he was tough and would very rarely quit a race. He should have won that ‘86 Vuelta.

PEZ: You won stages in Paris-Nice, Romandie, the Dauphine, Tour of Ireland and Coors CLassic but your biggest win came in 1990, the ‘cult’ GP Ouest France Plouay.
It’s a special event – I’d been second there the year before to Jean-Claude Colotti so I understood the race. In the last kilometres everyone is tired and if you are strong in the head then you can take your opportunities in the finale. 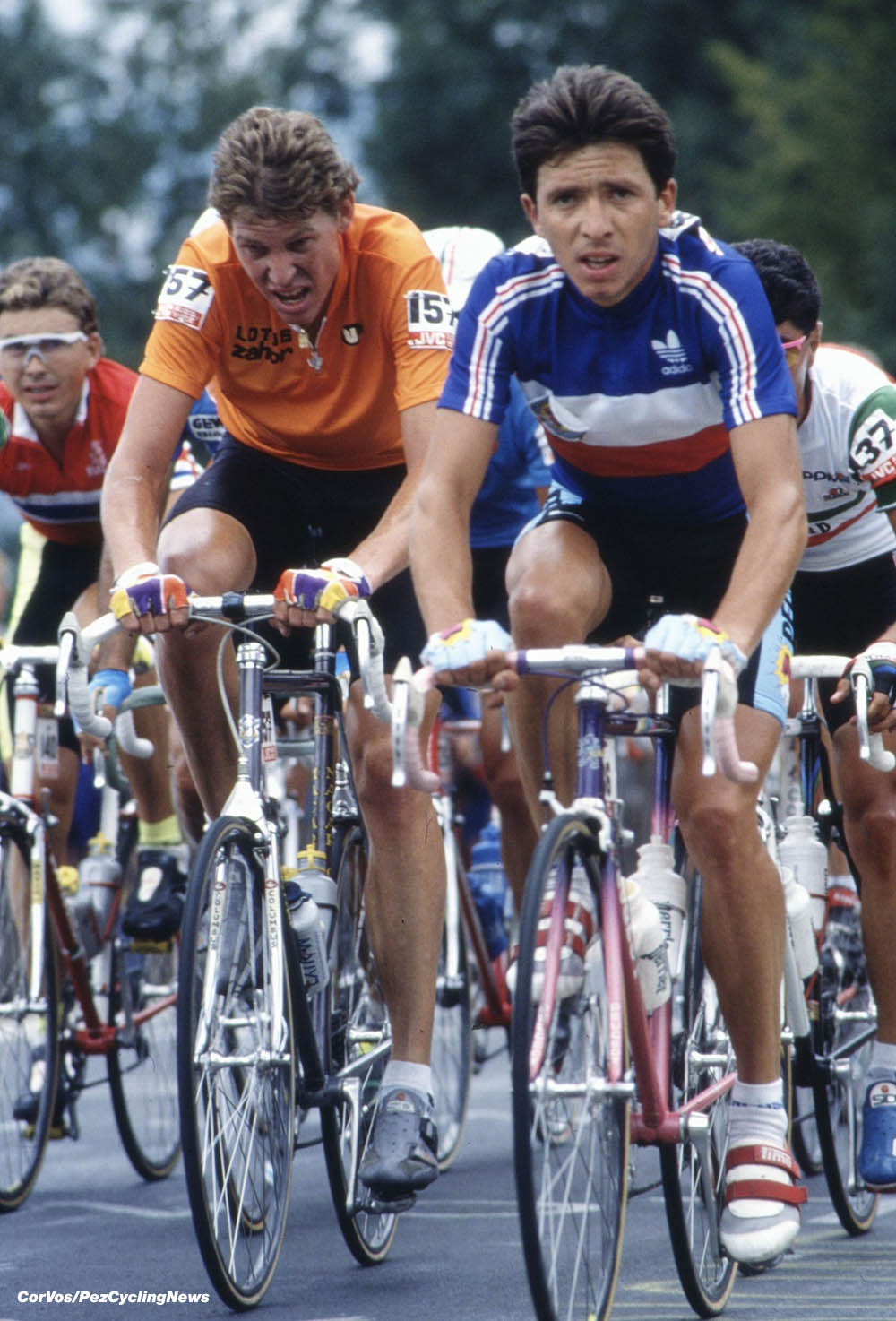 Next to a suffering Suijkerbuijk in the Worlds

PEZ: Season ’91 was good for you with good wins and just off the podium in the Tour of Lombardy.
I was improving year on year and lost weight which always helps, I won the time trial in the Circuit de la Sarthe and took the overall there too. I won A Travers le Morbihan too, that year. I started ’92 strongly with a win in the Trofee de Vendee and had a good Giro where I finished in the top 10 on GC. I was looking forward to the Tour de France but crashed out on cobbles on Stage Seven to Valkenburg, breaking my elbow. I finished the season with podiums though, in Paris-Bourges and GP Isbergues.

PEZ: You went to the Novemail team in ’93, was it a wrench to leave the Peugeot/Z team after seven seasons there?
Bruno: I was not so difficult as it was to leave La Vie Claire. I was with Peter Post at Novemail and reunited with Paul Kochli, who had a training role with the team – which was very good for the younger guys on the squad. Post was pragmatic and I enjoyed working with him but he shouted a lot if we didn’t get results for him! Walter Planckaert as DS was good, he knew that 30 year-old guys don’t need to be told what to do and trusted us to do our job. 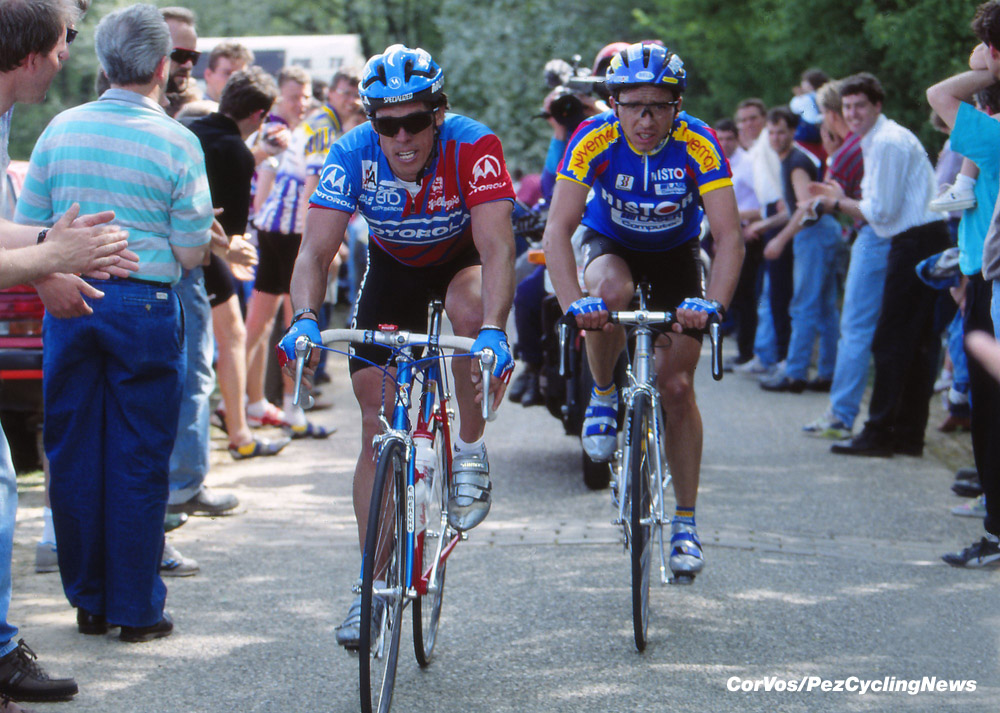 Next to Phil Anderson in Amstel’93

PEZ: The 1993 semi-classic Paris-Bourges was a nice win for you.
It was very dark that day with a head wind and thunder in the final, the speed of the peloton dropped, the Belgian guys started looking at each other and I took my chance.

PEZ: You went to Chazal after Novemail.
The team was a little smaller but I was happy to come back to France, the ambiance was good and my motivation was strong. 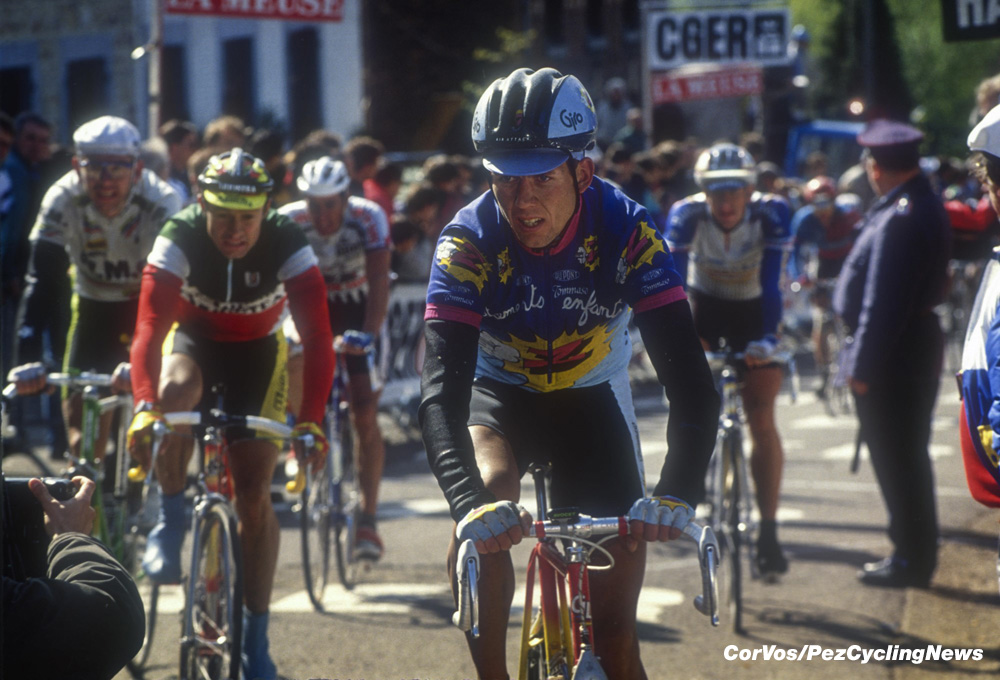 With Z on a Lemond

PEZ: Lanterne rouge in the 1995 Tour.
I had a bad saddle sore that season and had to go under a general anaesthetic to have it cut out, that was the week before the Tour, so not the best preparation. But I did get good post-Tour criterium contracts from being lanterne rouge. 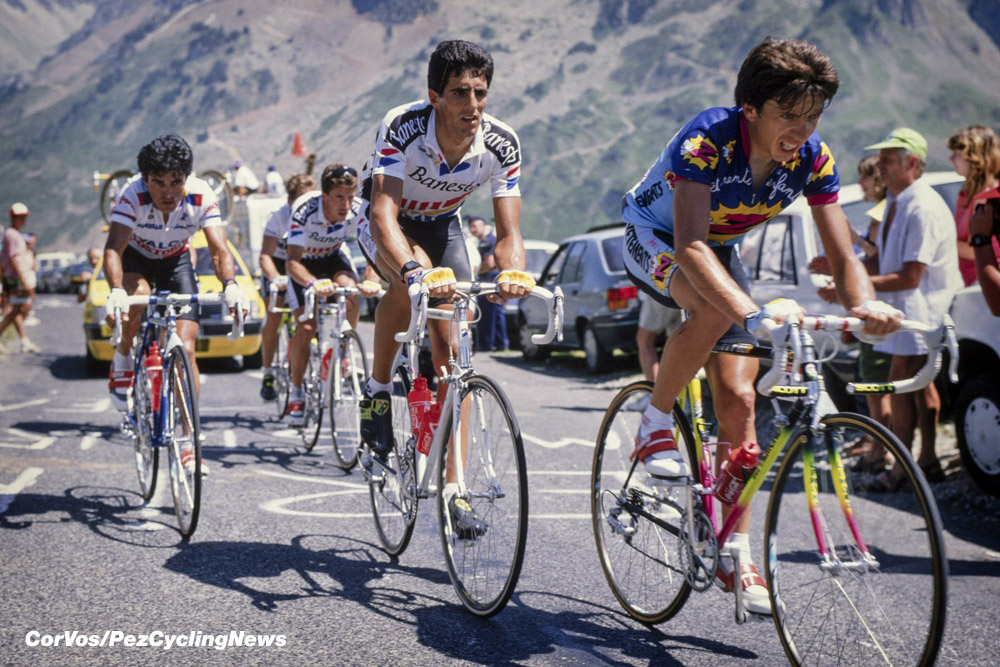 Climbing ahead of Indurain, Delgado and Lemond in the 1990 Tour

PEZ: Your career hi-lite?
I had 24 professional wins of my own but helping Greg Lemond to win the 1990 Tour de France with Z was special, playing a decisive role for him in the mountains – that was very satisfying. 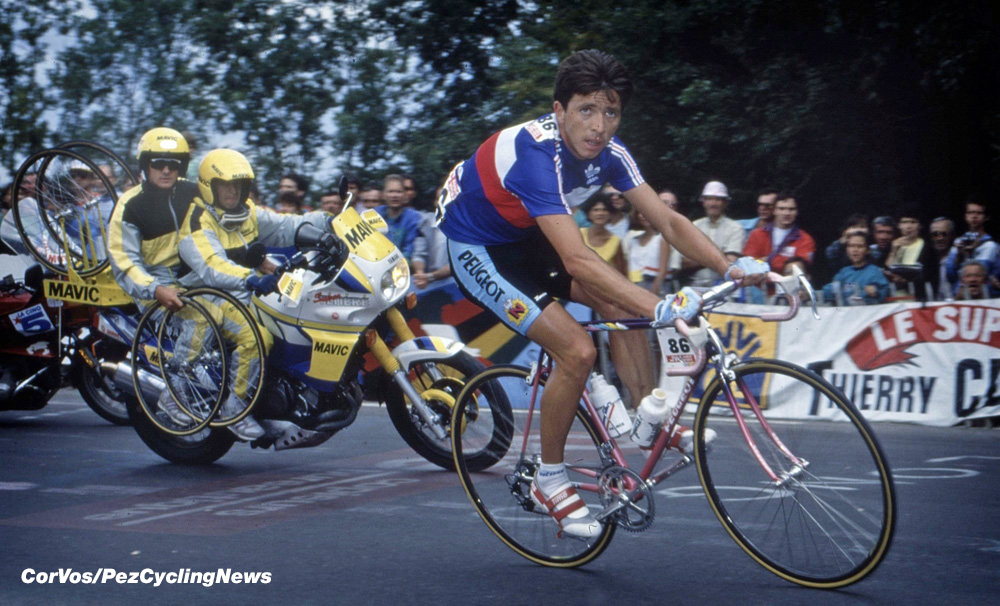 PEZ: Regrets?
Not so much but it would have been nice to ride with one of the English-speaking teams, the mentality was different. 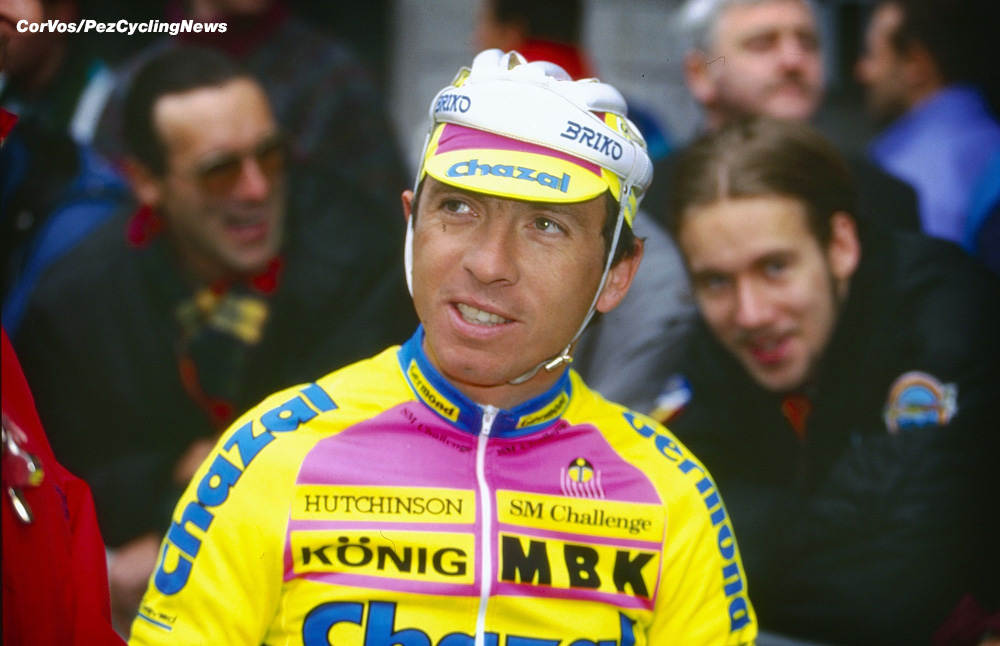 PEZ: You’re an airline pilot now?
Yes, with HOP, a subsidiary of Air France, I fly routes like Paris to Aberdeen and Paris to Edinburgh.

# Once a fast man, always a fast man, with thanks to Bruno and to Linda Ann for connecting us. # 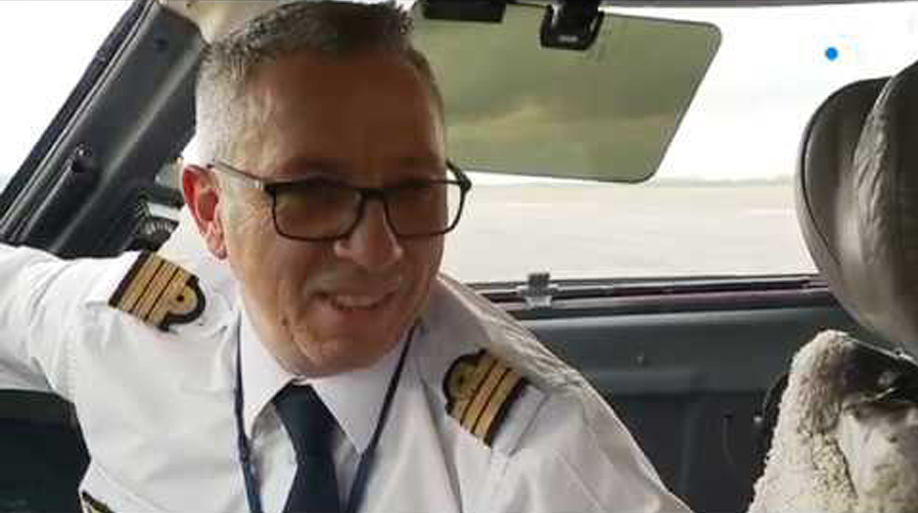