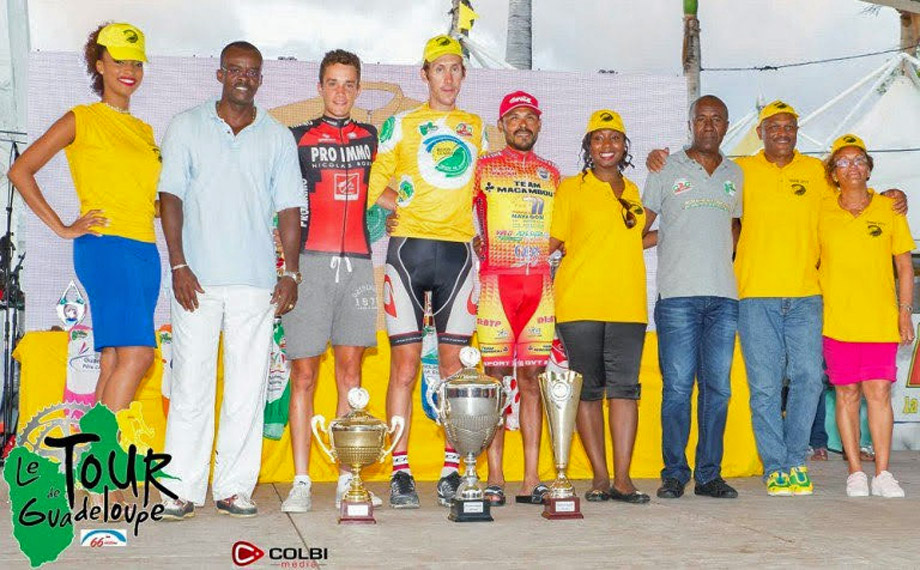 Recently we ran a piece about Masatoshi Ichikawa, the first Japanese rider to compete in a Grand Tour. This gentleman did things the other way round; after a long career with French professional team Cofidis – and a Grand Tour stage win – he headed East and now competes out in The Land of the Rising Sun. Thanks to our PEZ friend in Japan, Mr. Takashi Nakata, we bring you an interview with Monsieur Damien Monier. 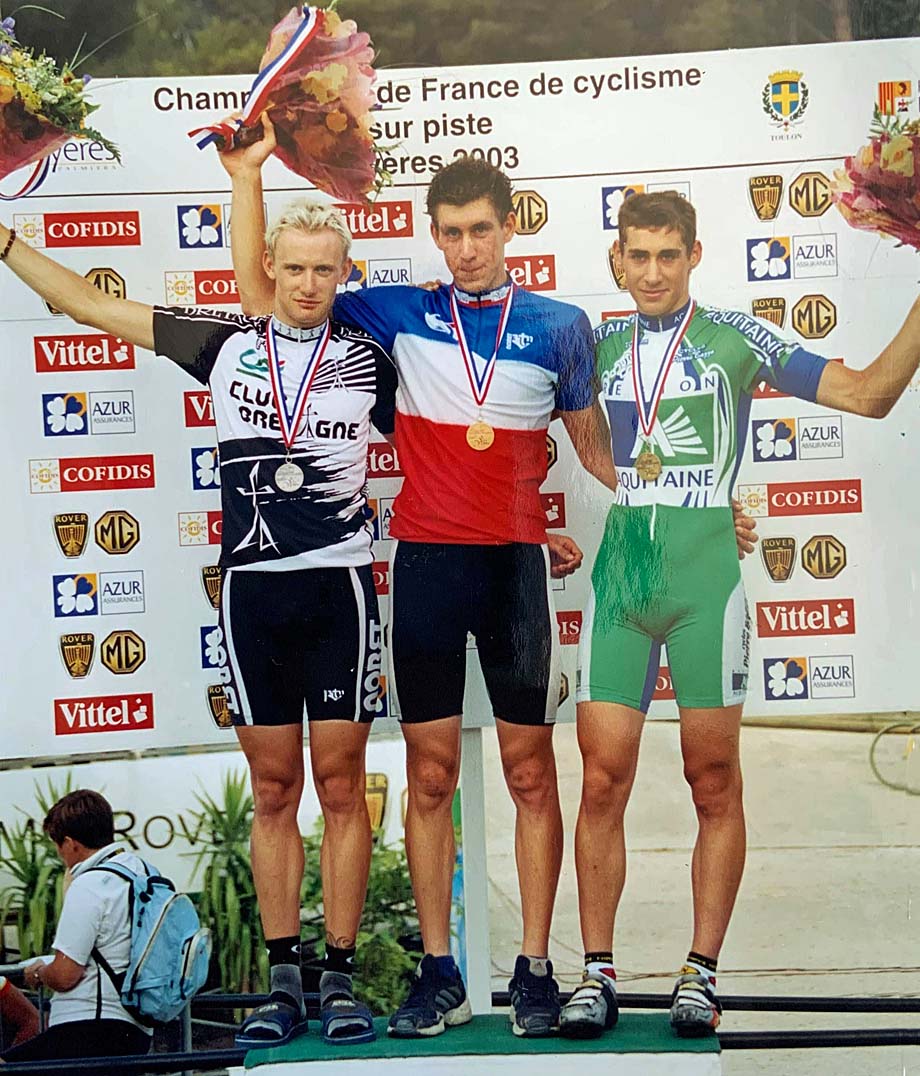 PEZ: You were a ‘chronoman’ as a young rider, Damien with third then first places in the Chrono Herbiers and French Pursuit Champion as an u23.
Damien Monier: Yes, I won the French championships in the individual time trial and four kilometre individual pursuit when in the u23 category. Those result gave me the opportunity to get a contract with Cofidis for the next year. They did physical test in their laboratory after the French championships; the test results backed up my potential. But I started with a relatively small cycling club, so I didn’t compete in road races at Nations Cup level in the U23 category. I only experienced road races at the highest level after turning pro. 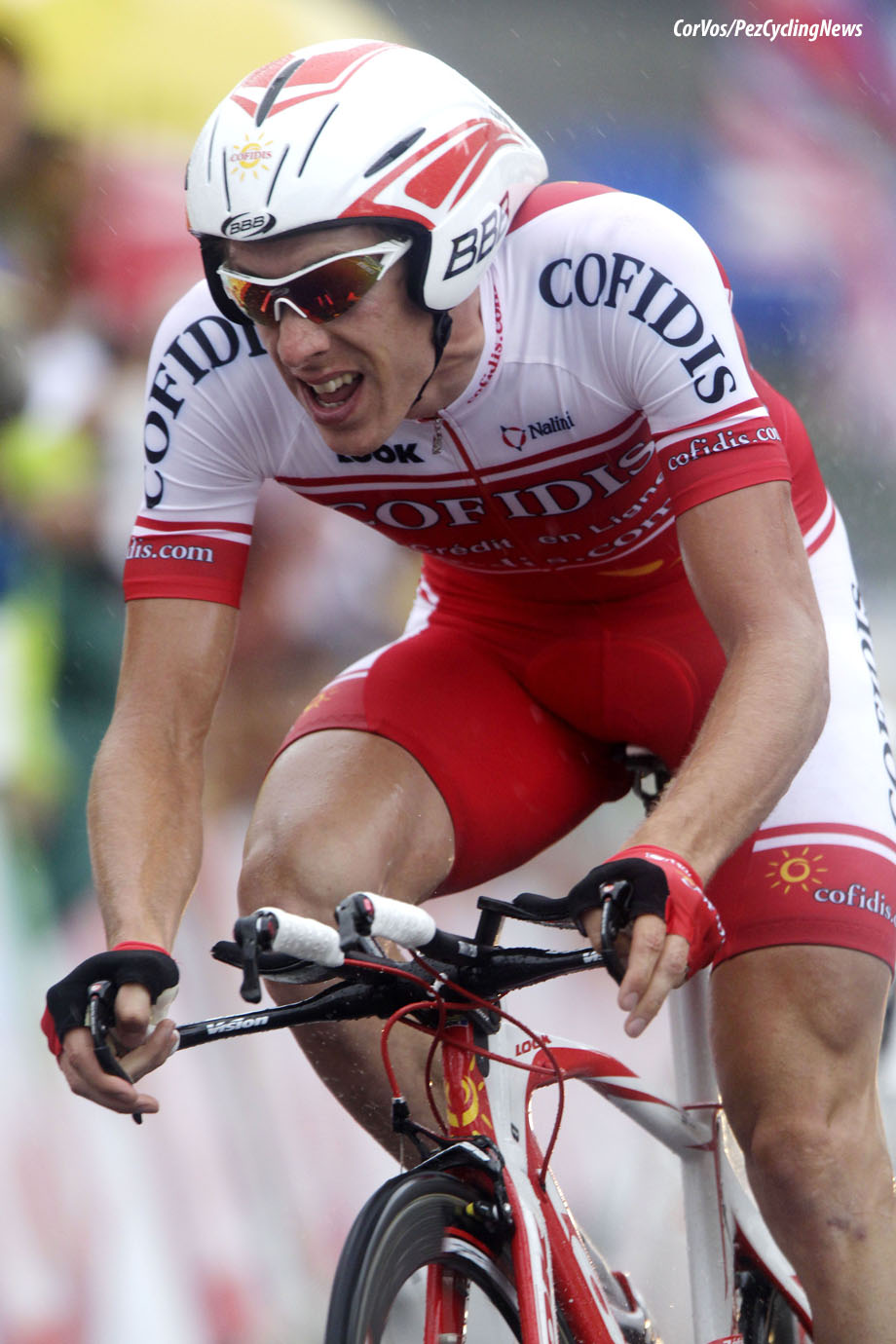 PEZ: You and Cofidis must have like each other – you had nine full seasons with them.
The first two years were really tough, I was always in survival mode. I raced 45 days in my first season but I finished only 10 races or so; I did well in the time trials but struggled in road races. I needed time to learn about how to ride professional road races. After two years with Cofidis I wasn’t sure that the team would extend my contract but DS Eric Boyer gave me one more year. I improved year by year so I managed to extend my contract with the team and relationship became long term as a result. 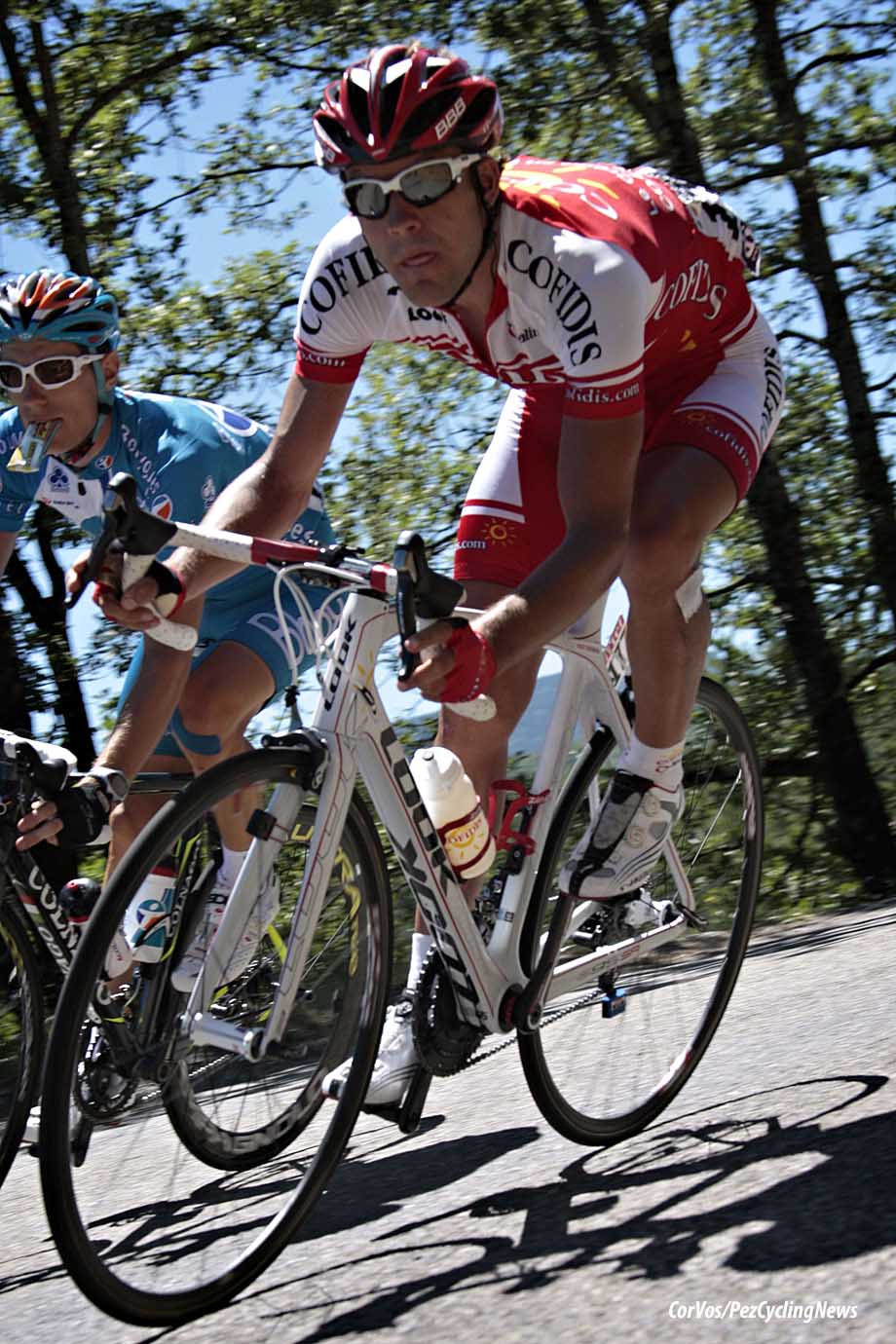 PEZ: What was your usual role in the team?
My role in the team changed over the years. After two seasons of struggling, I start exploiting my time trial abilities in road races. My role then was getting in the breakaway or chasing down breaks on the flattish roads. After I lost weight – nine kilograms – my role changed to help GC rider in the mountains. And later I rode as a leader for myself. 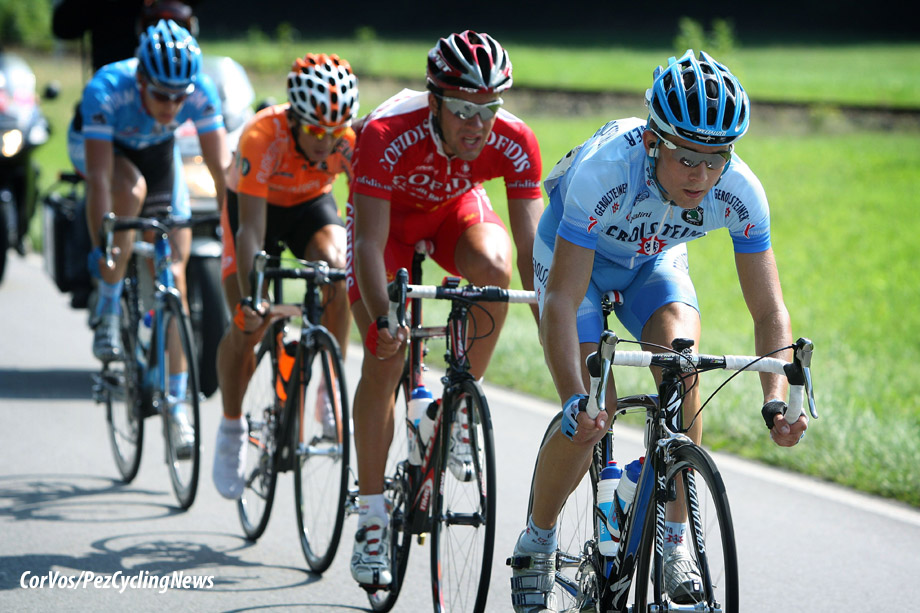 PEZ: You were French Elite Pursuit champion twice – did you ride the World Cups and was the track something you would have liked to ride more of?
I got eighth at the Bordeaux track Worlds in the individual pursuit; just two seconds from qualifying for the semi-final. I did well in the road time trial at the beginning of my racing career; I was recommended to start track racing not just to get results but to strengthen my TT ability. 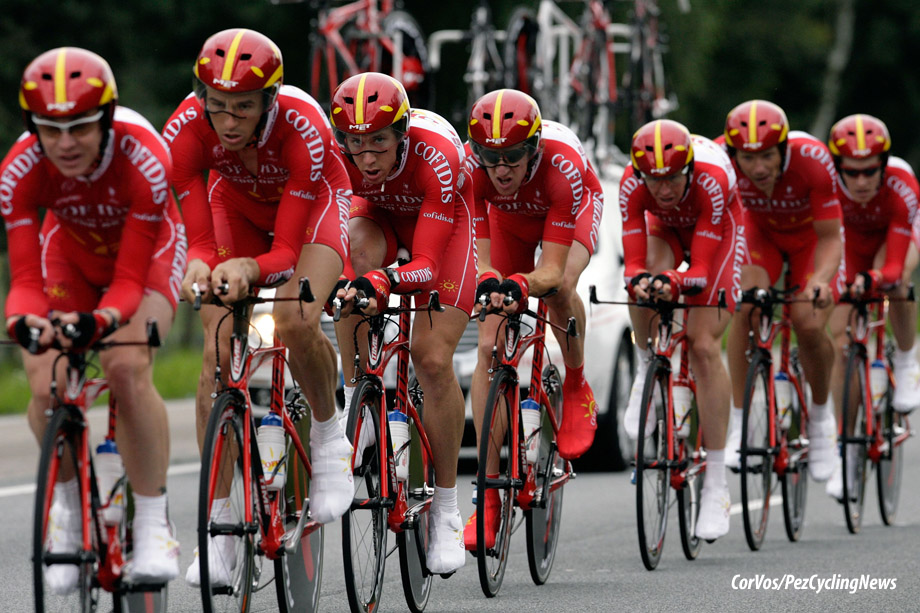 PEZ: Your first Grand Tour in ’07, the Vuelta – your memories of that?
I was happy to get selected and happy to finish that race. The Vuelta was the easiest Grand Tour at that time with the climbs pretty sparse – not like now! 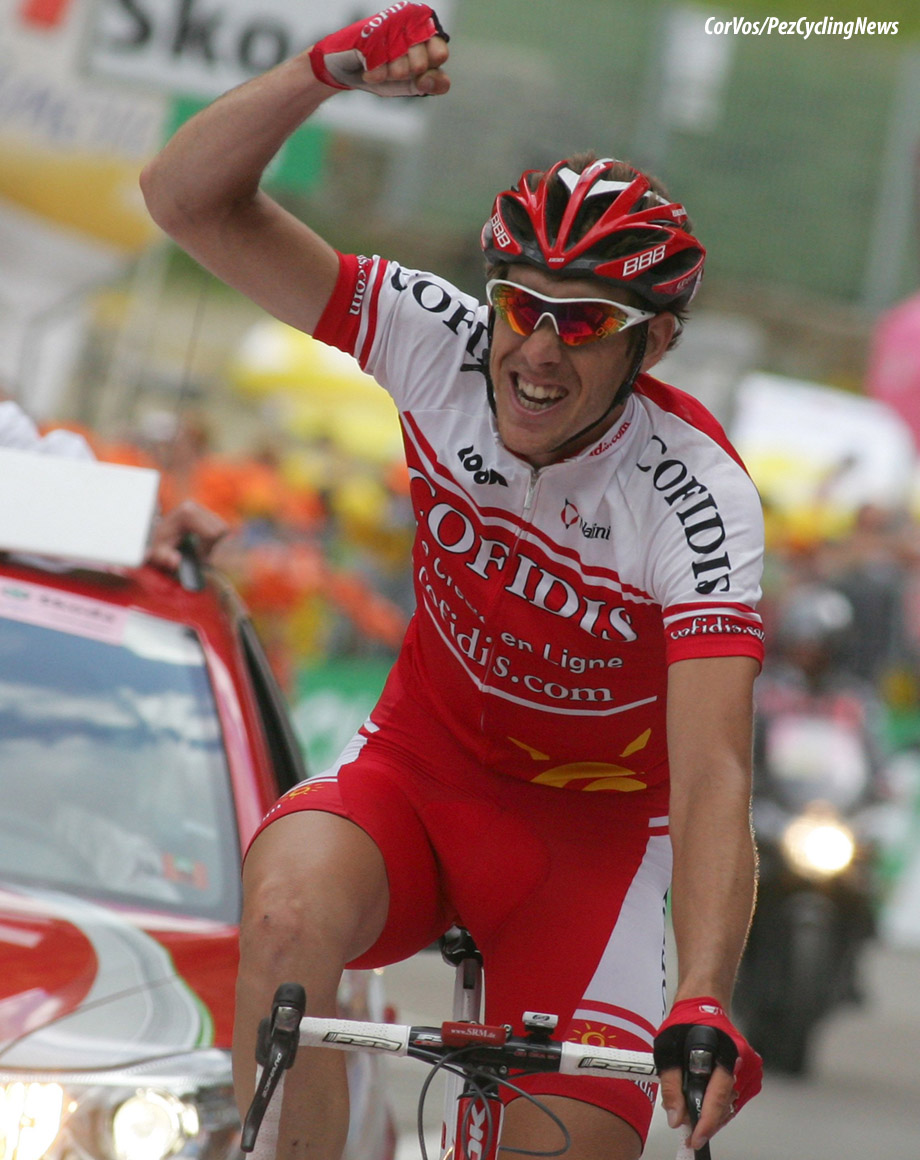 PEZ: The Giro ’10 and a stage win – tell us about it.
It was mountain top finish stage; Stage 17, so it was towards the very end of that Giro. The day before that stage was Stage 16, a mountain time trial at Plan de Corones where I finished 26th and my sensations were good that day. For Stage 17, I felt good from the start. I was in the breakaway of 17 riders that escaped from the peloton in the early part of the stage. We got over a 1500 m climb and finished at Peio Terme at 1393m. I entered the final climb with a young Steven Kruijswijk and the sprinter Danilo Hondo. I attacked from the three kilometres to go banner where the climb really begins to kick; I finished alone. The team had hunted for a stage win all during that Giro and it was my first win after I turned pro in 2004. An incredible moment! 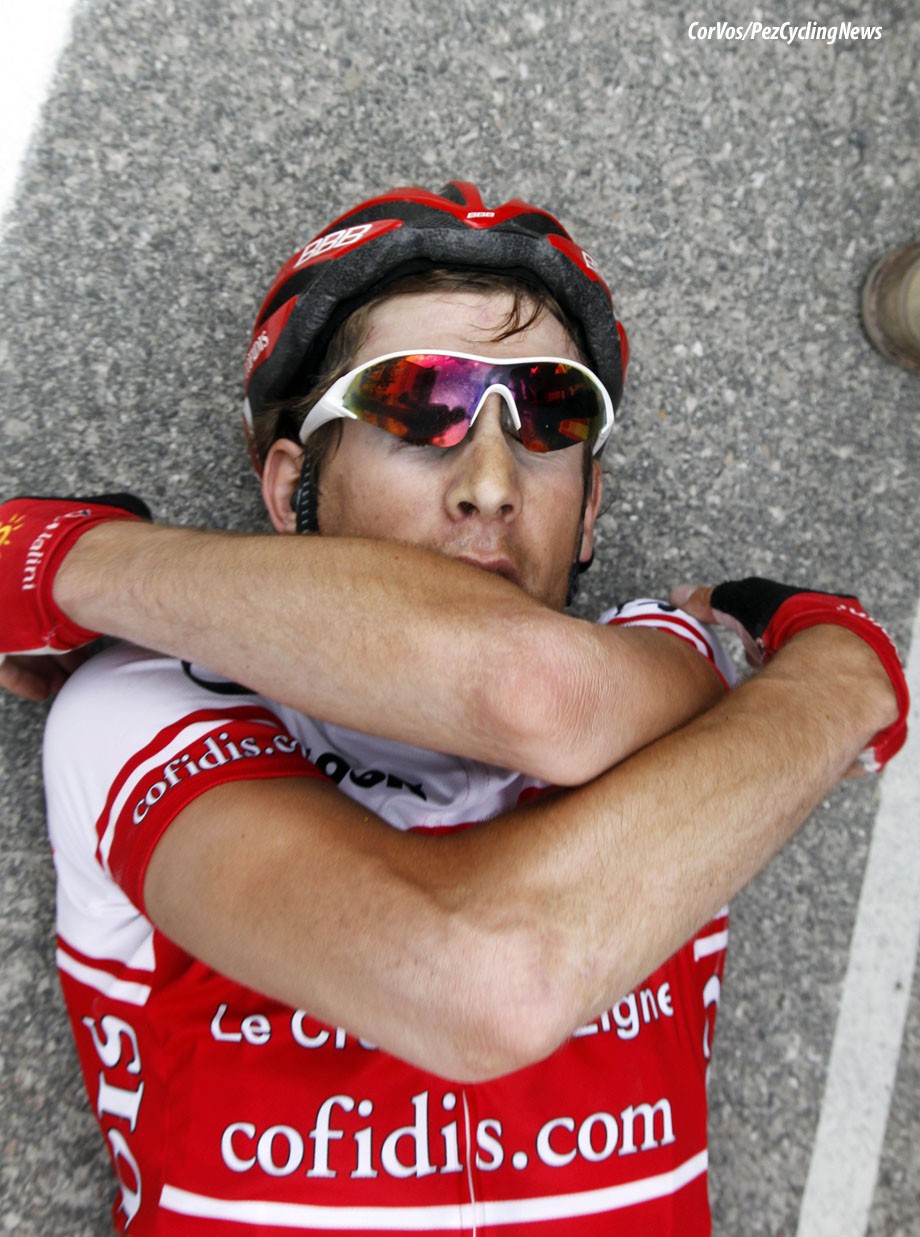 PEZ: Then you rode the Tour, the race every young Frenchman wants to ride – your recollections?
After a seven years of a pro career I had matured as rider and wanted to do well in the GC. After the first week the team switched leadership from Rein Taaramäe to me. It was first experience for me to ride as a leader in the team. I was protected by my team riders and climbed well in the mountains with other GC riders. I clearly remember the moment when I entered Col de la Madeleine with other GC riders. Only 20 riders remain the front group; Contador, Sammy
Sanchez, Schleck attacked from our group. It was the moment when I raced among the world class riders but I crashed on the descent and lost time that day. It’s a proud moment to finish at Champs-Élysées but at the same time it’s a pity that I know I could have finished higher. 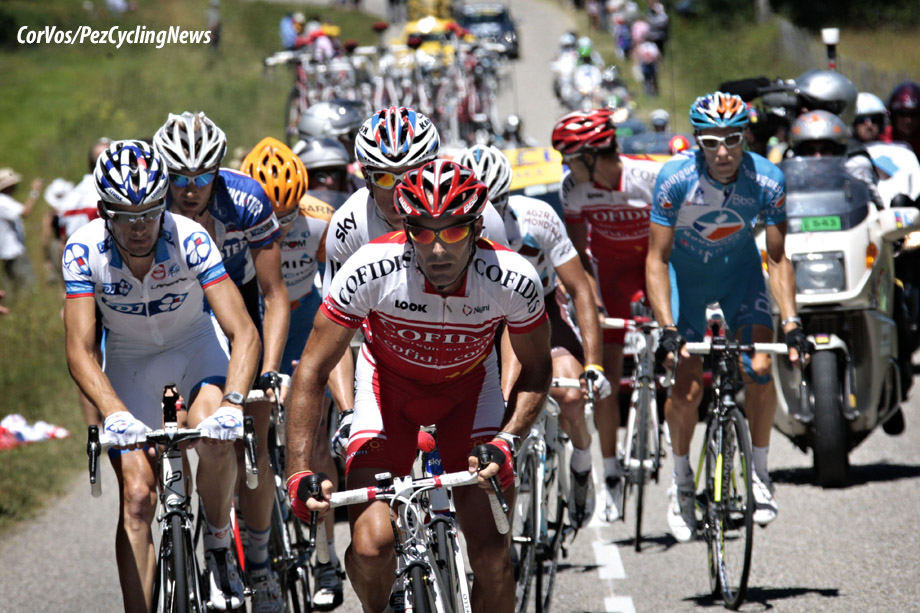 PEZ: Then you rode for Bridgestone in Japan – how did that ride come about; tell us about the team and why you travelled East?
I had health problem last two seasons with Cofidis, I contracted helicobacter pylori which upset my digestive system. It prevented training recovery and I always felt tired. To make matter worse, I crashed hard during a training ride at a roundabout in the spring. Because of these factors, Cofidis didn’t renew my contract. Then former Bridgestone rider and my long-time friend Takehiro Mizutani – who lives my home town of Clermont-Ferrand – introduced me to the Bridgestone team. So I joined them in 2013; my home now is in the Japanese prefecture of Aichi. 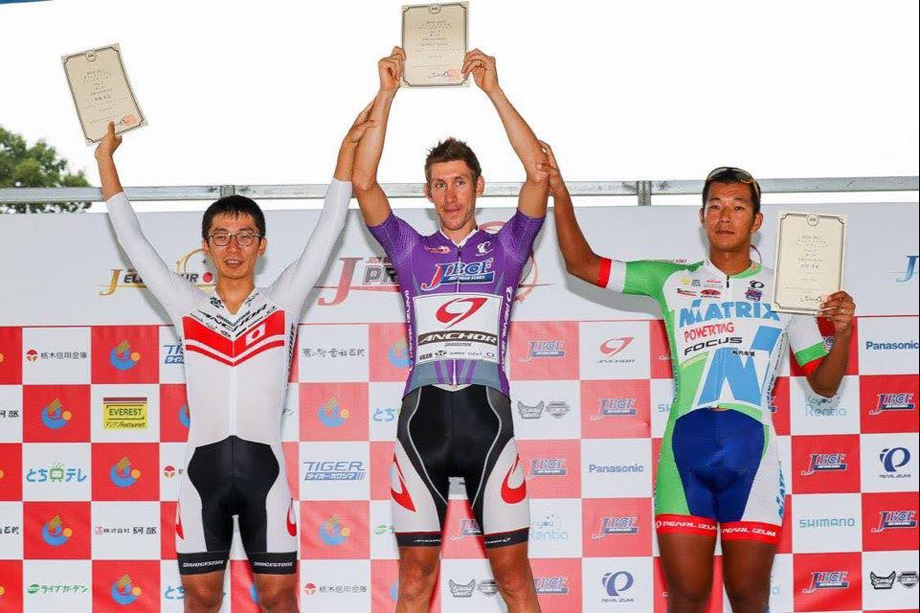 PEZ: You rode a very cosmopolitan programme – Japan, Guadeloupe, Algeria, Philippines, Indonesia, Croatia, Iran – travel must be something you enjoy?
Yes, I travelled all over the world with them. It’s interesting to see foreign cultures and race abroad. 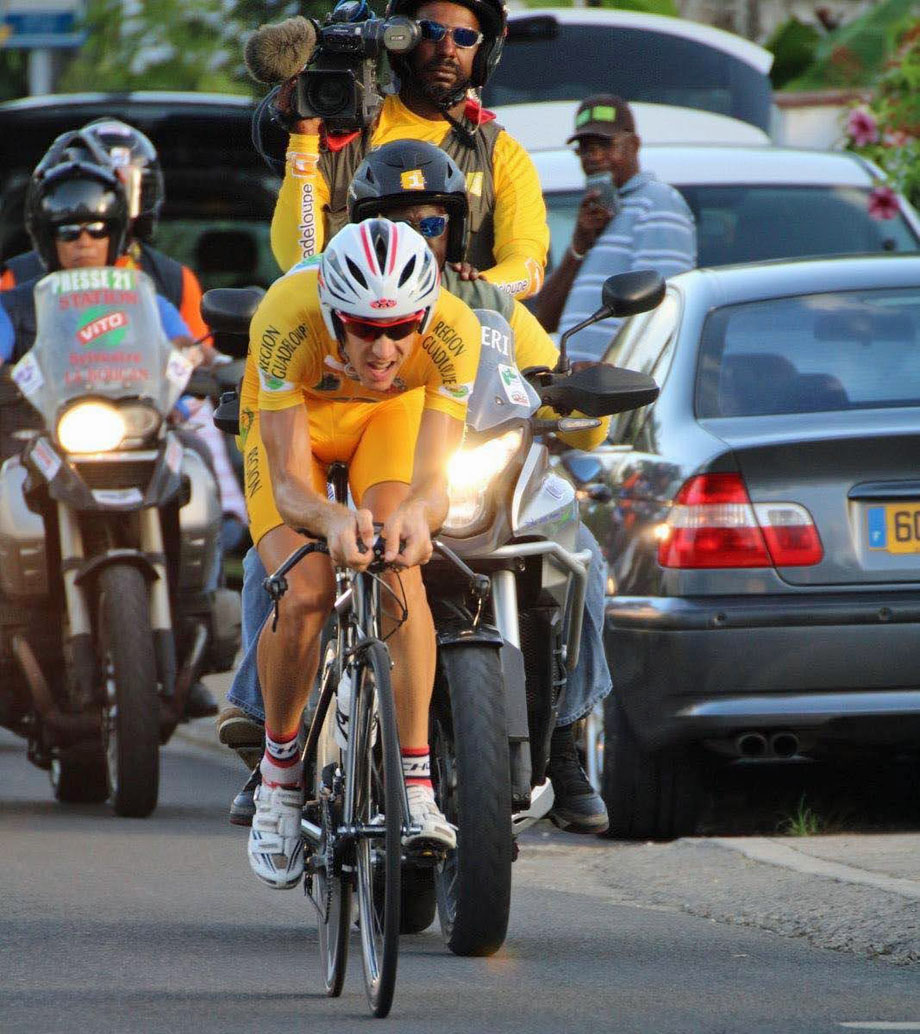 PEZ: A win in the Tour of Guadeloupe in 2016 – a nice result.
Yes, that was a great result. I was very happy to have won; the Tour de Guadeloupe is very difficult with 10 days of racing – two days having double stages – no rest day and long transfers to the start and hotels. This was my fourth participation; in 2013 I was sixth, in 2014 second, I lost the yellow jersey the day before the finish, in 2015 I suffered a fracture of the collarbone the day before the finish but finished second on GC. Then in 2016: Victory! I think this is the best victory of my career. The Tour de Guadeloupe is a “mini Tour de France” with big crowds – cycling is the number one sport in Guadeloupe. The TV – with a ‘heli-cam’ – and radio stations all cover the race and there lots of interviews requests to honour. It’s also my only overall victory in a stage race. 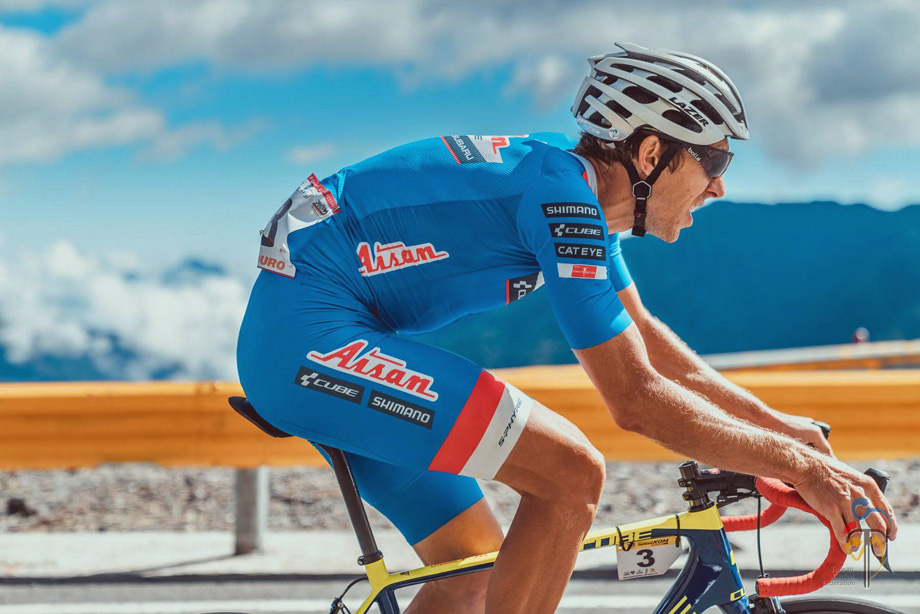 3rd in the Taiwan KOM in Aisan colours in 2018. Photo: Taiwan KOM 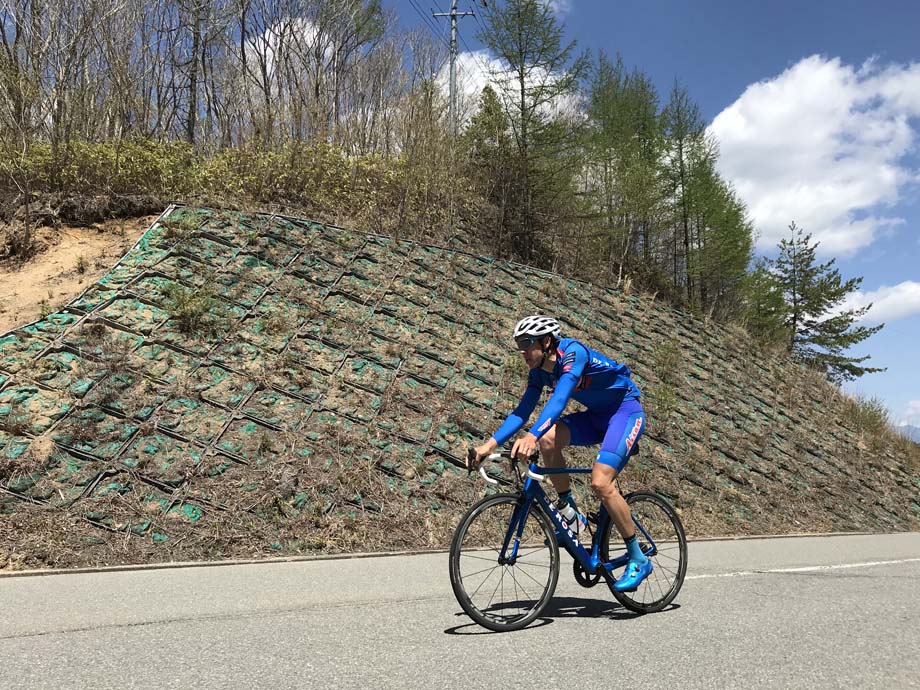 PEZ: You’re 37 years-old, how many more seasons?
I still love racing and training; my passion for racing is strong so I’m willing to race more seasons. But I don’t know, it all depends on the market? 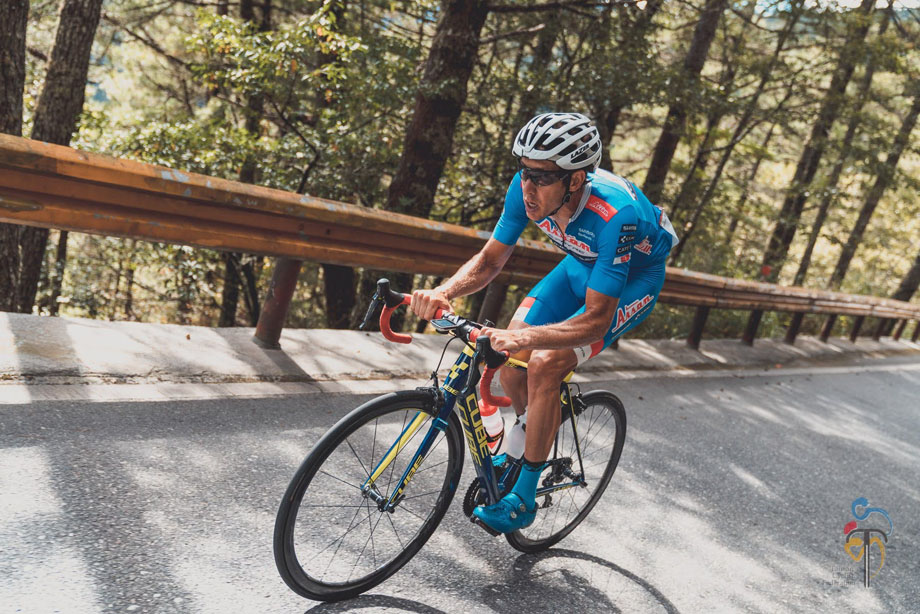 PEZ: Have you thought about your career after cycling?
I’ve had a long career and have broad international racing experience from the Tour de France to the Asia tour. My Japanese has improved to a daily conversation level so I think I would like to work with young aspiring Japanese cyclists to achieve World Tour level in the future. . . 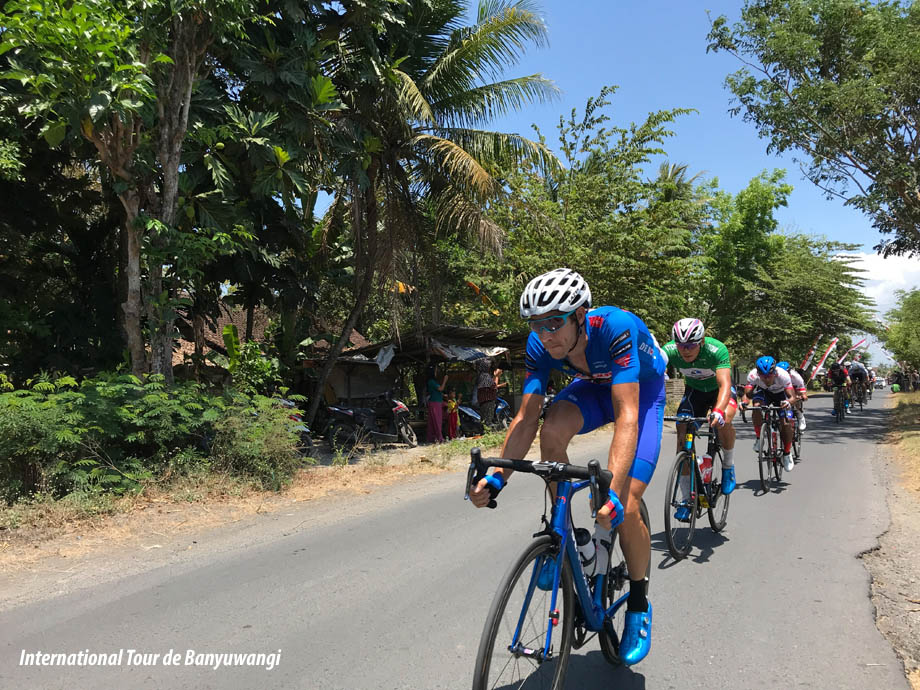 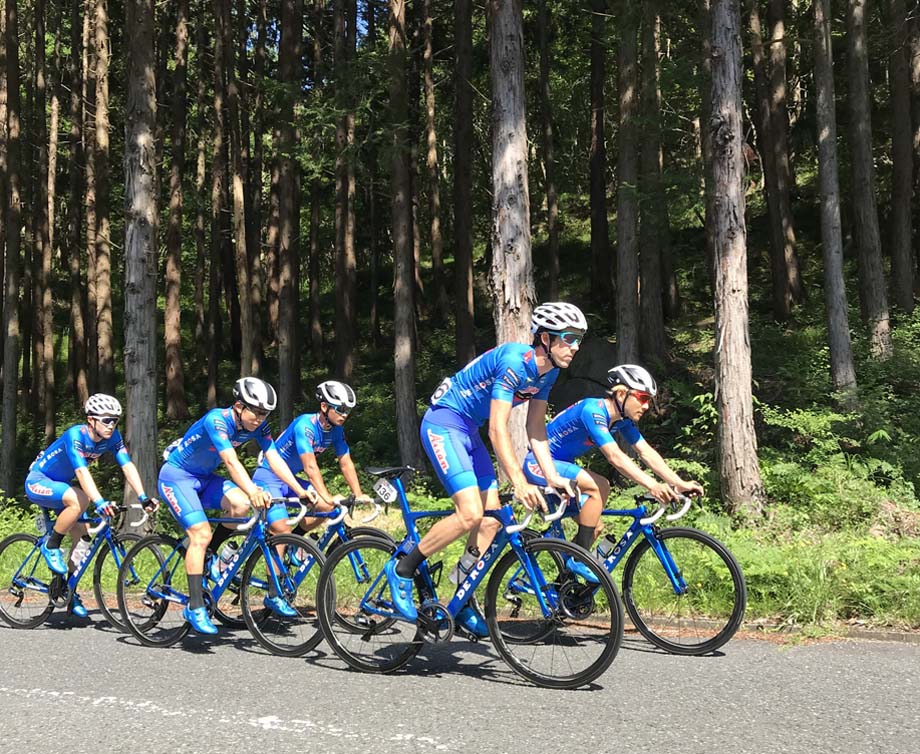