The multi-lingual Swedish ex-mountain bike king has moved from the dirt tracks and mud to the tarmac for his first crack at road-racing with the Fuji-Servetto Pro Tour team … and he’s started rather nicely! Here’s what Fredrik had to say just prior to a stellar debut in Malaysia.

After coming tantalisingly close to snaring a road contract with Barloworld a couple of years back, Fredrik is now flying in the blue kit of Fuji-Servetto with a fourth overall at the Tour de Langkawi, sixth at the GP Lugano and the mountains prize at the Gran Premio dell’ Insubria . Everybody, meet Fredrik … 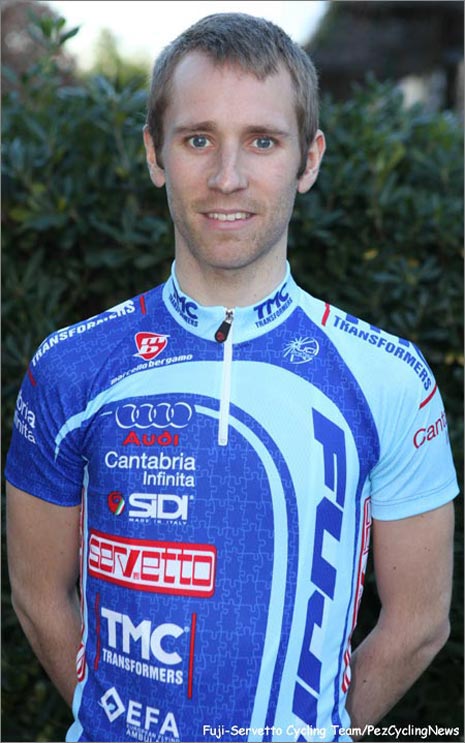 PEZ: What prompted you to decide to move from MTB to road?
Fredrik: I think most people who know me well knew that it was just a matter of time before I would make the change. When I was 21-22 years old, I was racing 50/50 on the road and mtb.

The focus was always on mtb, but I was training with a lot of roadies, and beating them as well, so I’ve always been intrigued to find out how I would do on the road. To make the transition now has been planned since a few years back, as I wanted to participate in the mountain bike race at the Beijing Olympics.

PEZ: Are you inspired by the many successful transformations from mtb to road by riders like Cadel Evans, for example?
Fredrik: Definitely, Cadel has had a dream career so far, at least in my eyes! And there are other examples of riders making the leap successfully. I can only dream of having Cadel’s results, but it is an inspiration for sure! 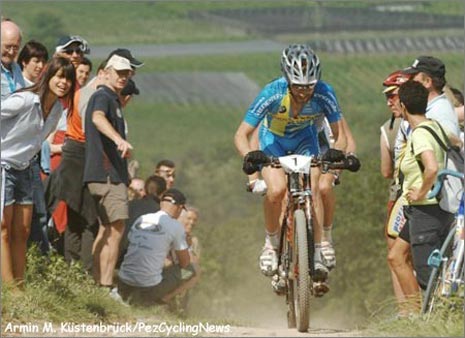 PEZ: How much security does a two-year contract on the road give you?
Fredrik: I actually only have a one year contract, but I have more or less decided to give it at least two years before even thinking of turning back to mountain biking. Two years can be a long time to get some results.

As long as I can get into the season on a good level and then start finding my form during the season, there should be plenty of opportunities to get some results. On the other hand, if you get into the season the wrong way (say with a crash, injury or sickness), then two years can pass without any results easily.

PEZ: Do you have an idea where your strength will be on the road: Classics maybe, or longer stage races?
Fredrik: I am hoping to develop into a stage racer, with some overall strengths such as climbing and time-trialing. I know I can climb fairly well when I am in good shape, but I have no clue as to how I am when it comes to time-trialing. It will be exciting for me to find out as well! 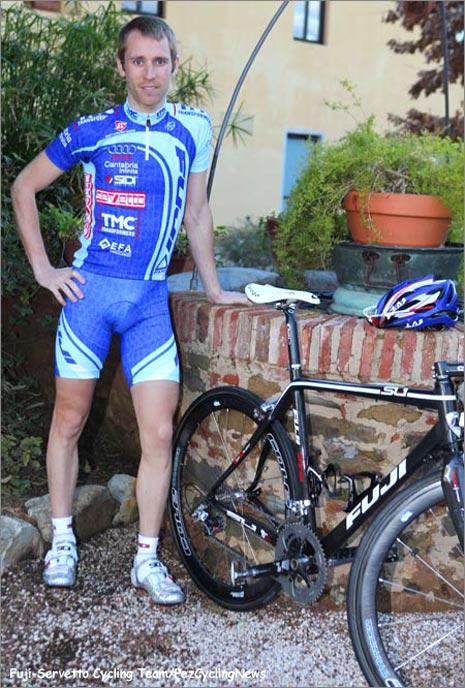 PEZ: If you could dream of a great result or a win in one race which race would it be?
Fredrik: I would love to race the Giro d’Italia and do well there. Since I moved to southern Europe in 2004 (Italy and since 2007 Switzerland), I’ve been able to follow the Giro and learn to realize how big the race is down here. So even to start would be a dream come true.

PEZ: So you feel you will be a climber more than anything else?
Fredrik: I think I will need some tough races with at least some climbing to make my results, so yes.

PEZ: Did you already know some of the riders from Fuji-Servetto?
Fredrik: I know Daniele Nardello well, he only lives like 5kms from me. We go training once in a while together, and even mountain biking. 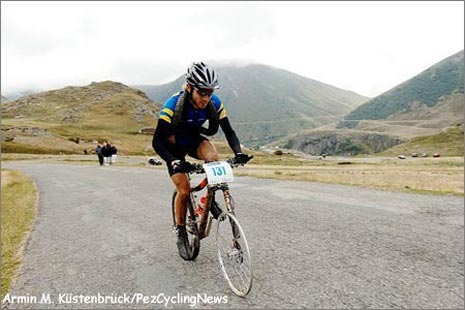 PEZ: You nearly rode for Barloworld on the road until a crash. Can you tell us a little about that?
Fredrik: Yes, I was given the opportunity to ride on the road as a stagiare with Barloworld, but just a few days before my first race with them I was out training with some friends when I crashed and managed to break my ankle.

I was so disappointed, but after that I decided to put the whole road thing on ice until it was time to make the real change. I always felt responsibility towards my mountain biking teams to race full-time with full commitment for them. In the end, they were paying my salary to do well in mountain biking, not on the road. 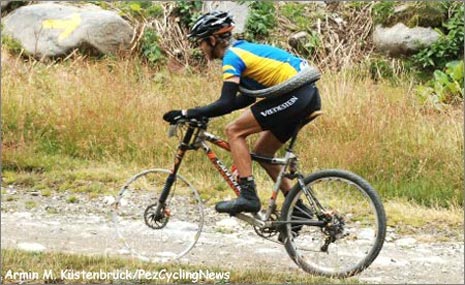 PEZ: Do you think you have been unlucky – you have had some bad injuries in your career?
Fredrik: Well, I think everyone has some bad luck once in a while. This last year has been a tough one for me, especially with my disappointing Olympic race. But in the end, I am pretty lucky to have made it to where I am today with the results I’ve had, so I am not going to complain. 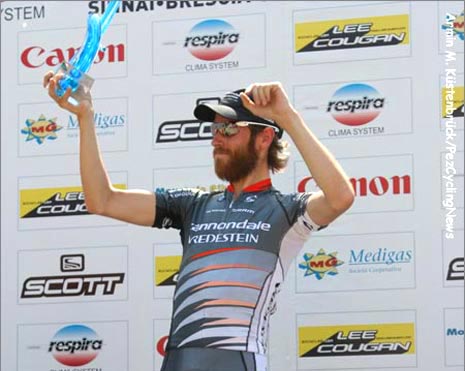 This is what cycling needs … more riders with beards winning stuff!

PEZ: Tell us about your finest moments in MTB? What were the results you are most proud of?
Fredrik: My world cup race win in 2007 was a dream come true. I still think back on that and feel proud. My world championship bronze medal I rank high as well and my European championship bronze, too.

PEZ: Do you feel more ‘Swedish’ or more ‘international’- you have lived in Greece, Germany, Belgium and now Switzerland?
Fredrik: Ha-ha! I am still a Swede! I will always compare things to how they are back home in Sweden. Even though I have lived most of my life abroad, we have always had Swedish traditions, and travelled back home several weeks per year.

PEZ: You must be very skilled with languages – how many do you speak?
Fredrik: Well I “only” speak Italian, German, English and Swedish.

PEZ: How good is Switzerland as a residence, for life and for training? There are lots of Swedish riders living there or close by such as Gustav Larsson and Veronica Andreasson?
Fredrik: The area I live in is great. Especially having Gustav so close to me has made it easy to live abroad. The roads here are OK, the traffic is not too bad. We tend to stay close to the lakes, where the scenery is stunning and the traffic is moderate.

Gustav and I are very good friends and train together whenever we can. We have known each other since we were 15 years old. 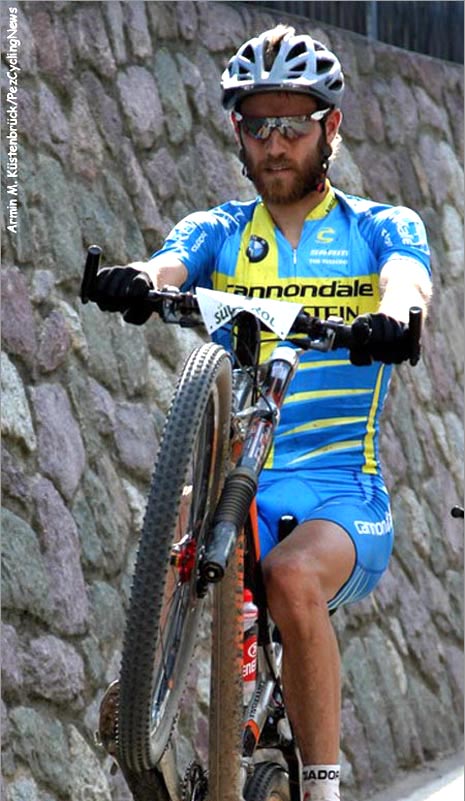 PEZ: Your favourite kind of music?
Fredrik: I have a pretty wide taste of music. I enjoy hard rock such as Metallica and Judas Priest, but also calmer music such as Coldplay and Keane (was at a Keane concert in November).

PEZ: Favourite films?
Fredrik: Hmm, a few good films according to me are “Saving Private Ryan”, “Gladiator” and “Braveheart”.

PEZ: Away from biking you’re into motor-rallying. Have you ever competed in rally yet, or is that something you would like to do in future?
Fredrik: Indeed, rally is a big interest, I have never competed in a rally but I sure would like to give it a go. Maybe I’ll get the chance after my cycling career.

PEZ: What kind of car do you drive?
Fredrik: At the moment I have a Volvo V70 and a Seat Leon Cupra, but I am looking at getting an Impreza or Lancer Evolution within the near future. 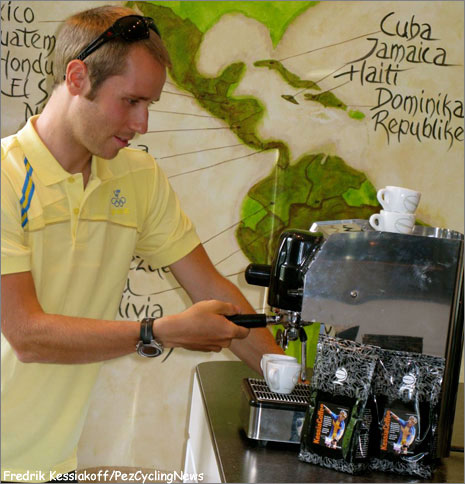 Fredrik fires up a tasty brew from his KessiaCoffee. 100% Arabica beans, for a rich flavour – nice!

PEZ: Tell us a little about KessiaCoffee?
Fredrik: It started as a joke, but people started asking where they could get some, so I decided to contact a coffee roaster in Stockholm and the rest is history…

PEZ: On your website, your favourite drink is ‘pear cider’ – do you think you will also start to make/market this drink alongside KessiaCoffee?!
Fredrik: If I can come up with a good name for it, why not?!

PEZ: If you won the EuroMillions lottery jackpot, what would you spend the money on?
Fredrik: There are a quite a few cars I’d like to own, so that’s where a big share of the money would go!

***
With thanks to Fredrik for his time and best wishes for the season. He’s currently resting up before returning to action at the Settimana Internazionale Coppi e Bartali at the end of March.

For more info on Fredrik and KessiaCoffee go to www.kessiakoff.com