David Millar; bad boy, Simon Pure or hypocrite? Think what you like, but after his journey through doping and cycling he is a very interesting guy and still has a lot to say which is well worth listening too. Drugs, drink, cycling, life, the past and the future, we cover it all as David Millar gets PEZ’d!

A few years ago David Millar blanked me at La Vuelta a Espaсa. Then there was the tantrum he threw at the top of the Alto de L’Angliru in 2002, which was followed by his drugs scandal. Millar was not one of my favourite riders, but when I was asked which riders I would like to interview at the Garmin training camp, David was one of the first I thought of, so here he is: 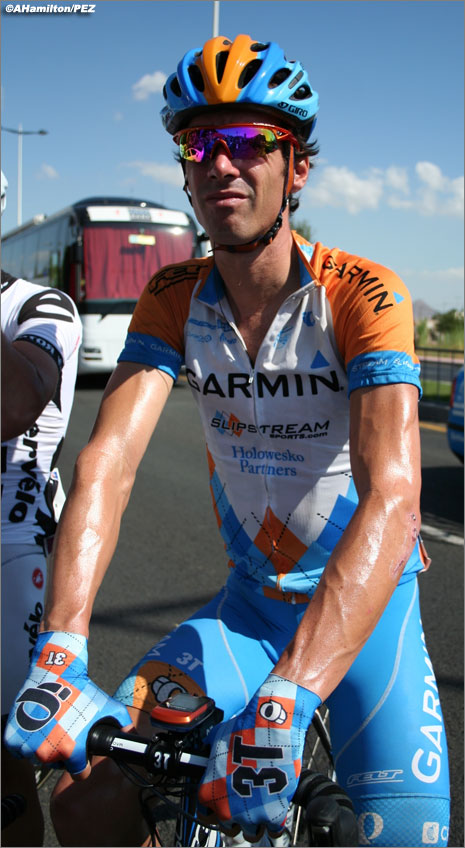 PEZ: What is you race programme for the 2012 season?

David Millar: I’m still hemming and hawing about doing Paris-Nice and I’ll be having a discussion about that today. Apart from that it will be; Oman, Het Nieuwsblad, Tirreno or Paris-Nice, then all the Classics apart from Paris-Roubaix, which I will be a reserve for, and then Amstel. Then I won’t start again until the Tour.

PEZ: What would you be looking for at the Tour?

David: I’ve not really thought about it to be honest. I will just turn up and do my thing! The prologue would be my high objective and then I would play it by ear. I’ll do what I usually do. In fact I’ll turn up better than usual: last year I had done a lot of racing with the Giro and stuff. This year I will have had that break in May, so I’ll be stronger at the Tour. 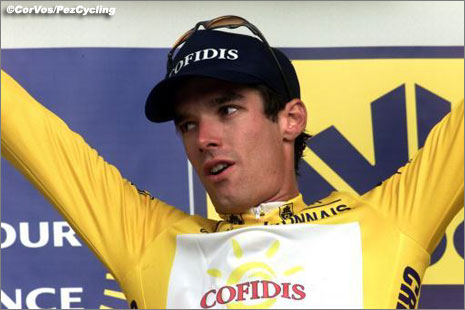 David: Again I haven’t really looked. I know there are a lot of time trials, so that’s good. I think it’ll be a good race actually. It’s good to see they are not going for those ridiculous, continuous, escalating mountain stages like a lot of other races (which suits me). It’s going to be an interesting race.

PEZ: Who would you tip for the win? 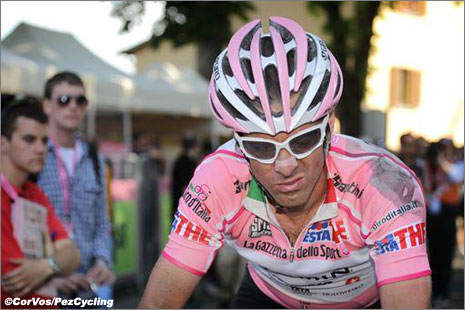 Despite his success in the Giro in 2011, Millar will be leaving the Corsa Rosa alone in 2012. The new father will focus on the Classics and the Tour.

David: It’s something I’ve sort of compartmentalized, and I don’t think about it. It’s out of my hands. I’ll think about it if something changes. Until then, it’s not a point of discussion for me.

PEZ: Sir Chris Hoy has been quite vociferous that you should not be riding, have you spoken to him about it?

David: No, not at all. That’s Chris’s view, fair enough. 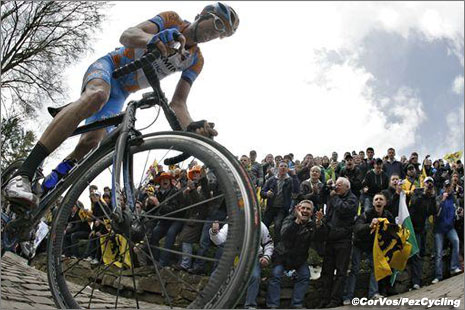 The Tour of Flanders will be a target for Millar in 2012.

PEZ: What would you still like to prove in your career?

David: I’d love to win one of the Classics — that’s one of my goals for this year, Flanders, E3. I enjoyed it when I did it a couple of years ago, so that’s what I’m training for. With the new circuit it’s going to be a lot harder. It was pretty damn hard before. It’s going to be selective, that’s for sure, so I’m looking forward to it. I’m at a point in my career where I can do what I want, and I don’t get any pressure. I do what I do. The team knows that I can do anything, win a Classic, a stage race, time trials. I’m quite a diverse rider in that respect. I’m not doing Fleche or Liege. I’m a reserve for Roubaix, but I’m doing everything else. Flanders is my big goal; it’s a bit more hilly and harder. Gilbert is going to be hard to beat. He will be more motivated than I will be, and you have to hope you already have a gap when he goes, because when he goes no one can go with him. Obviously Fabian will be there, yea it will be a good race. 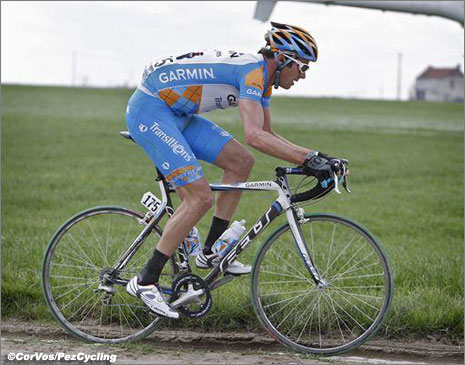 Paris-Roubaix will not be a target.

PEZ: Is there anything you do wrong in races?

David: Yes, I love racing so I always end up getting in the mix some ways. I can’t help it. Even when I go to a race to train I end up going pretty deep. I’m not very good at switching off. Even if I’m helping team mates or doing lead-outs. It’s my natural disposition just to race. I enjoy racing. I tend to smash the fuck out of myself every race I ride. I tend to finish races exhausted. When I’m meant to take it easy I do quite well, like in the Giro or Vuelta I’ll win the last time trial. I also enjoy leading out Tyler and the adrenaline in the finalй. That’s one of the good things about cycling; you can derive as much pleasure helping a team mate to win as winning yourself, its good fun.

David: Yes, I think so. He helped us win Paris-Roubaix by marking out Fabian and in the Tour de France — he was just incredible. He is an incredible athlete. We’ll miss him for sure. He gave us that little extra we didn’t have, so we are going to have to find that without him. We are not missing guys who can win races; no doubt the Tour will be something special. 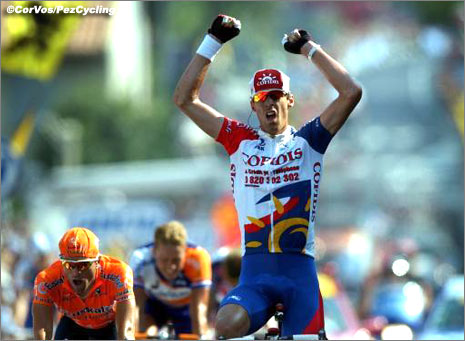 PEZ: Which performance of yours gave you the most pleasure?

David: There have been a lot of different ones for different reasons. Stage 13, 2002 Tour was one of the best days. I’ve had a lot of pretty amazing days, but that one stands out.

PEZ: How many more years can David Millar race?

David: As many as I can! Four or five, better say five, I’ll be thirty-nine. I’ll squeeze every last drop out of myself, that’s the plan before I go back into the real world. 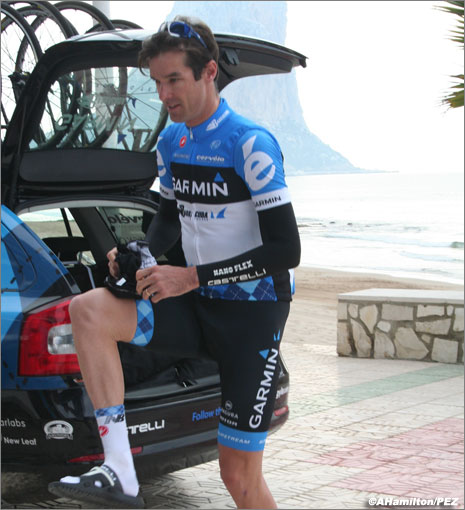 PEZ: What about the real world, what about after?

David: Better get this one bit done first.

PEZ: Is there anything you are not happy about? 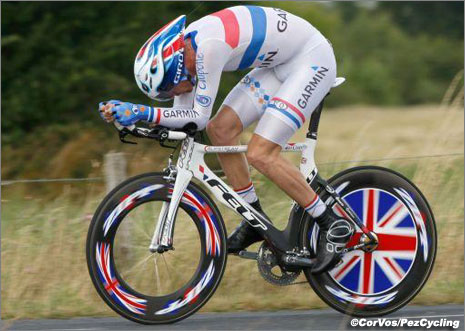 Millar has always been, and will always be, a man for the chrono.

PEZ: How did you feel when you were caught?

David: It all fell apart, but I was quite happy with that at times. I hated cycling, I just wanted out…I wrote a book to explain it. I feel like I’ve almost put it to bed now because I’ve written about it. But that’s how I feel about it now. It’s all there on paper, it’s out there. I’m just regurgitating everything I’ve already said. I’m not doing myself justice by talking about it.

PEZ: How hard was it to write the book?

David: It was really hard, not emotionally or anything, just technically it was hard work – the volume of work. Getting it right, you only get one chance to write your biography. It wasn’t an emotional problem as I had been through it so often. There were moments that came back to me, but no it was more a technical exercise. The work was very demanding. I found that more draining than the emotional side. Getting it right making sure it reads well and how I wanted it. I actually wrote 25,000 more words that aren’t in there. I’m proud of my writing, but it was an easy story and a good story to tell. That was half the battle. 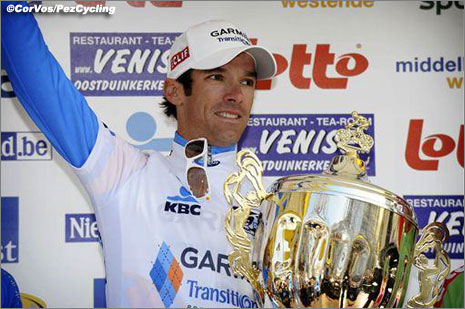 Millar isn’t a prolific winner, but he does have some gems, including those Tour stages, some World Championships, and his surprising overall win at De Panne a couple years ago.

David: At the moment I can’t imagine ever writing anything again. It took a lot out of me. I’ll wait and concentrate on my cycling, when I retire I might write another book. We’ll see.

PEZ: How different would your career have been if there had been a Sky team around when you were younger?

David: For sure, yea completely different. Things have changed so much over those years. Yea it’s a different world now with British cycling. I’m happy where I am now, so I wouldn’t change anything. 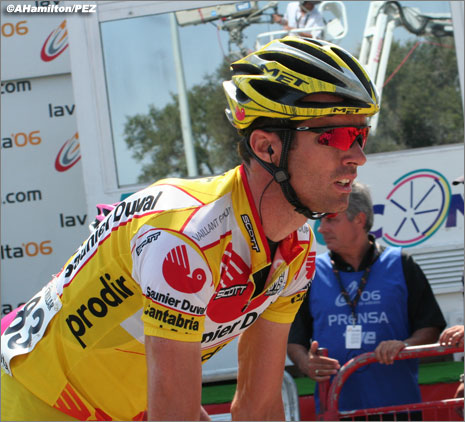 PEZ: Has your life changed over the years as a professional cyclist, how is life for you now?

David: Yes, it’s more stable now, happier. I’ve got a bit more than a normal life I suppose. Yea mature, like most people between the years of 25 and 35, everyone changes a lot. Just that mine had a bigger mistake, I suppose. Higher highs and lower lows. Where I am now is a nice place to be. My experiences have obviously shaped me, but at the time of things happening I was changing. The experience probably forced that, it’s a combination of the two. But I definitely learned a lot, what I’ve been through has taught me a lot. Yea, it’s been interesting.

Have you got a haggis for tonight? (for the Scottish celebration of Burns night).

David: I haven’t unfortunately and I’ve been off the booze so it sucks, it’s a double whammy really.

PEZ: You don’t drink anything at all?

David: I’ve got a bet with my sister, a stupid, stupid bet. It was at New Year, we were both very drunk and she had already planned to stop in 2012. So, at 5 in the morning I decided to do it with her. We made a bet to see who could go the longest. The loser has to buy the other a luxury holiday in the Caribbean, so the stakes are high. She can afford it, but it’s going to be harder for her, at least I’m a professional athlete. 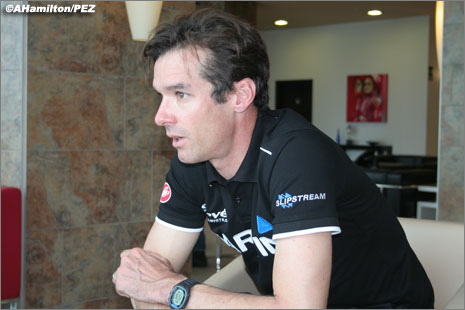 PEZ: You used to drink a lot, but still managed to ride all those hours on a bike, how did you manage that?

David: Genetics, Scottish genetics! I don’t drink that much and I don’t mix it. I’ve had my moments when I’ve gone off the rails, but I’ve always liked a drink which is probably from being Scottish. I always had an “on/off” sort of way; a bit too obsessive one way and then off the rails the other. There wasn’t much middle ground. I’ve managed to find a more medium ground the last years. I wasn’t happy in my 20’s and had an extreme personality. I’ve changed that, but the success I’ve had has been thanks to my personality. When I’m on, I’m on. I’m not a sort of cruzie person, I’ve had my up’s and down’s.

***
I can say I have changed my opinion of David Millar, he speaks well, is amusing, entertaining, serious and informative. Who of us have never made a mistake? I know I’ve made a few, but my mistakes were neither public nor important, not so for Mr. Millar. Good luck for the Tour of Flanders, a win there would make history.

Travel: A Week At The Chateau